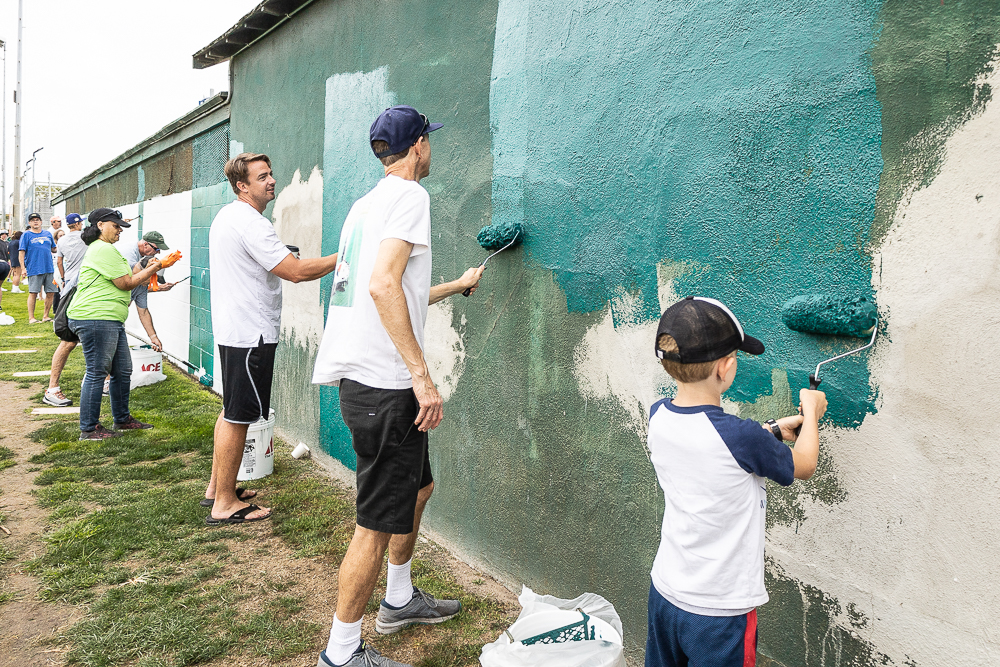 Buckets of a teal paint, and wide brushes, donated by Triangle Hardware’s Sonny Virgi, were spaced 10-feet apart Saturday morning, against the 100-foot long, stucco wall that is the back of the Lawn Bowling Club at Clark Stadium. The wall follows the first base line of Logan Field, named after Little Leaguer Logan Goodwin, who died in a skiing accident in 2017.

Following some cautionary advice from Hermosa Beach Street Superintendent Dennis Hrboka, a dozen Little Leaguers, their parents and other volunteers began painting over the faded avocado green wall. Within an hour, the Lawn Bowling Club wall looked new, and the volunteers moved on to a 300-foot long wall that follows third base into left outfield. 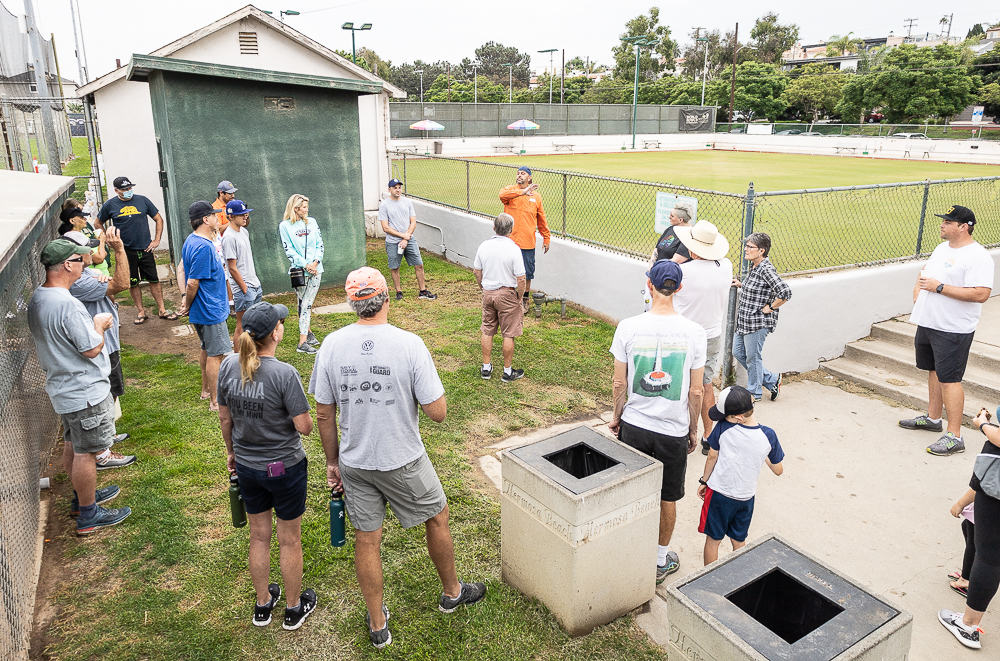 The first three clean-ups involved picking up trash at parks, and on the beach.

“But there wasn’t a lot of trash in the parks,” Mayor Detoy said. So he began organizing for more impactful projects. Last month, the mayor, and his volunteers teamed up with the South Bay Parkland Conservancy to plant seacliff buckwheat on the Hermosa Greenbelt for the migratory monarch butterflies. 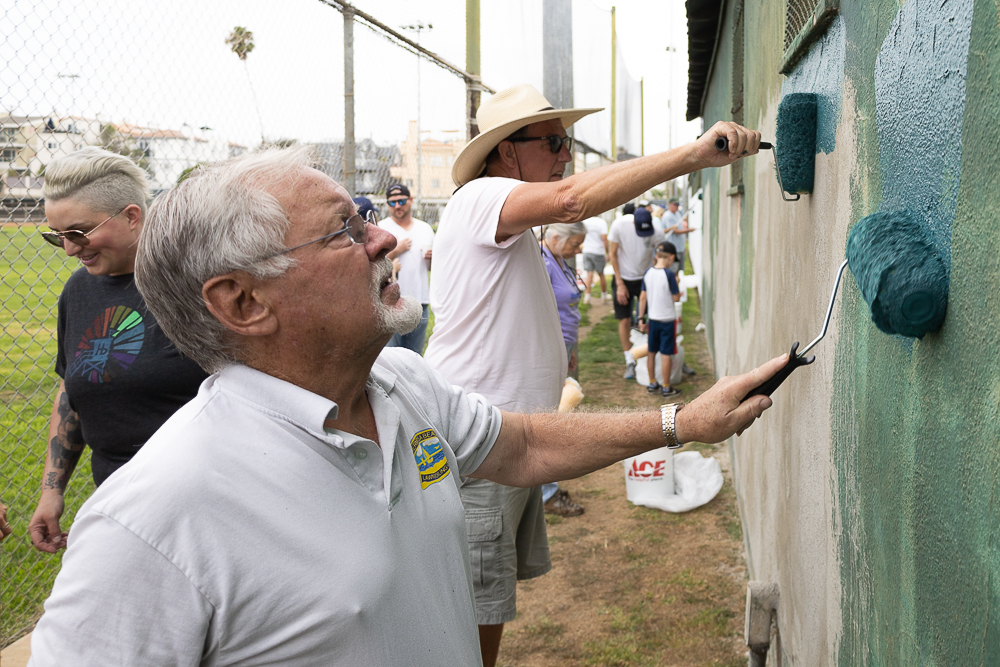 Hermosa Lawn Bowling President Tony Crutchfield and fellow club member Toby Block brighten up the back of their clubhouse.

Detoy said the monthly projects are an opportunity for residents to share their concerns with him, the police and other members of the city staff, who often stop by.

“A lady said berries from the palm trees in her neighborhood were attracting rats. So the next week the public works trapped the rats,” Detoy said.

The monthly work parties were inspired, in part, by a hike Detoy took with State Senator Ben Allen in Palos Verdes prior to the pandemic. 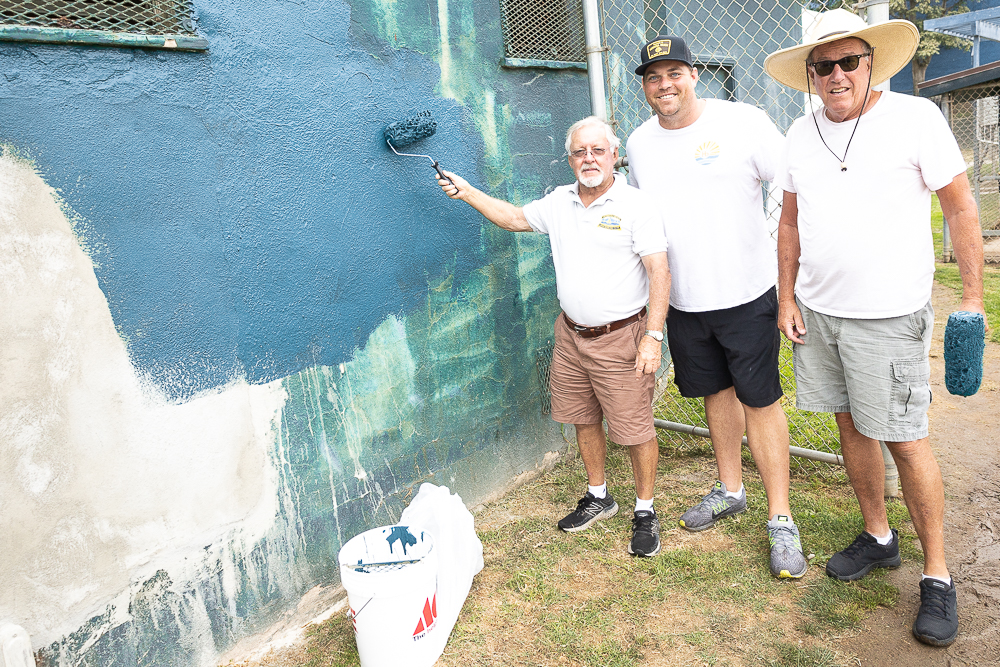 “During the hike he held a meeting with residents on a beautiful bluff overlooking the ocean. After the COVID-19 shutdown ended, I wanted to meet with residents again, but outside. And use the gatherings to leave the town a little better than it was before the gathering. I was raised volunteering. In middle school, in Colorado, my class helped at an Alzheimer home. I led the Riverside Fire Department’s Muscular Dystrophy Association Fill the Boot program for five years,” the mayor, a Riverside firefighter, said. 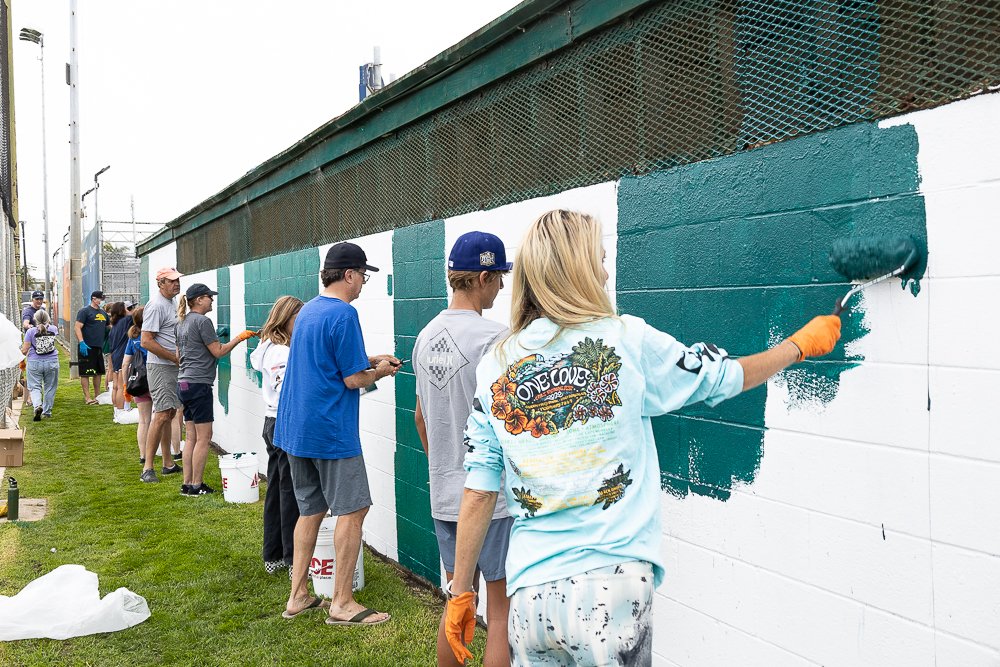 He plans to meet with Public Works Director Joseph SanClemente next week to decide on next month’s project.

“People ask me, Why not pay a private contractor to do the work?” But there’s nothing better than to hear Little Leaguers walking out on the field saying, ‘We did this.’” ER