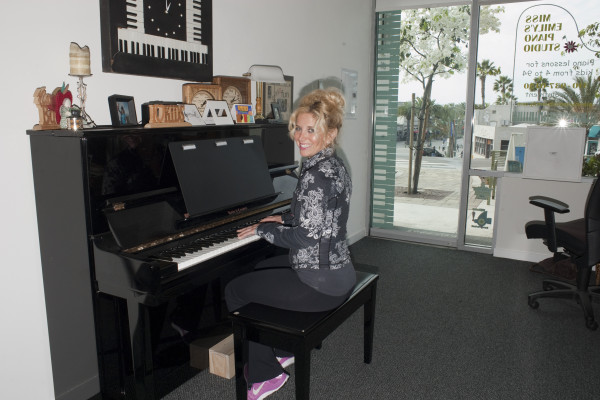 Through a small shop window in the heart of downtown Hermosa Beach the light notes of a piano can be heard. Piano teacher Emily Baum keeps the beat while encouraging her afternoon student though a new piece of music. Even though her walls are soundproofed to keep from bothering her many retail neighbors at 200 Pier Plaza, a hint of music can still be heard through her piano key decaled doorway.

“Teaching here is all about loving what I do,” said Baum, who goes by Miss Emily and lives two blocks from her new studio. “I’m making a living by teaching and inspiring children and adults alike.”

Baum’s studio, which has been located in many different places throughout the years beginning at Pier Plaza next to Fat Face Fenner’s in 1999 and most recently in a dark studio on Aviation Blvd in Redondo Beach, opened her new studio last July in a very retail driven part of Hermosa Beach. Baum said she loves her new location because the space fills with both light and music throughout the day.

“I always envisioned I’d be in a place like this,” said Baum, who has a Baby Grand Steinway piano, multiple electric keyboards as well as an upright studio piano in the small space. “It’s great because people come here with a purpose and often it helps bring new business to the current businesses around me.”

A clapboard A-frame sign that’s located outside the studio features a black and white decal of piano keys, mirroring the extra large decal that frames the studio’s doorway.

“The kids that come by love to touch the piano on the sign,” said Baum, who is also a personal trainer and schoolteacher. “I welcome anyone to come and learn how to learn and play music and experience it first hand… And I really think I bring so much to the community, especially since music has been cut from the schools.”

Recently, Baum said that she has had an influx of older students who used to play piano when they were young, or always wanted to learn but never had the time.

“It’s part of their bucket list,” said Baum, noting that about thirty percent of her students are adults who want to revisit their love of music. “People think picking up an instrument as an adult is hard, but it’s not. People can learn anything as an adult, they’re just not as sponge-like as the children.”

“She makes everything easy,” adult student Don Inman said. “I’m basically a beginner and she’s made it super simple, especially for a guy who is coming back to music after many years.”

Baum, who is originally from New Jersey, began teaching piano on the side when she was a kindergarten and third grade teacher.

“I just developed my clientele after school, a lot of them were my students during the day too,” said Baum.

Now she has over 50 students and teaches group lessons as well.

“I’ve created a unique family experience,” said Baum. “I just love watching the kids learn and achieve success. I even use music as therapy.”

Patricia Hogan recently began bringing her 10-year-old son Ryan Mayfield to Baum’s studio for lessons after his father passed away in November.

“It’s a great way for him to come into his own. It lifts his spirit and it’s a way to meditate and escape,” said Hogan. “It’s given him a level of confidence in music and that’s helped in other areas as well… Music is such a positive influence in his life right now.”

Hogan added that often when she’s waiting for the hour-long lesson to finish she visits the shops in the downtown area or sits on a bench outside the studio.

“I know that she loves children and is super caring and its definitely has a passion to teach children piano,” said Hogan. “And she loves Hermosa, she’s definitely become a big part of the community.”

During her lessons, Baum said that she strives to make both the children and adults feel successful not just in their piano skills.

“Sometimes I’ll ask them, ‘Who’s awesome!’ and they’ll say, ‘I am!’” said Baum. “It just helps them build their self confidence and other skills like listening and good manners.”

Miss Emily’s Piano Studio is located on the ground floor of 200 Pier Ave. in Suite 303. Visit www.pianolessonsbyemily.com for more information.