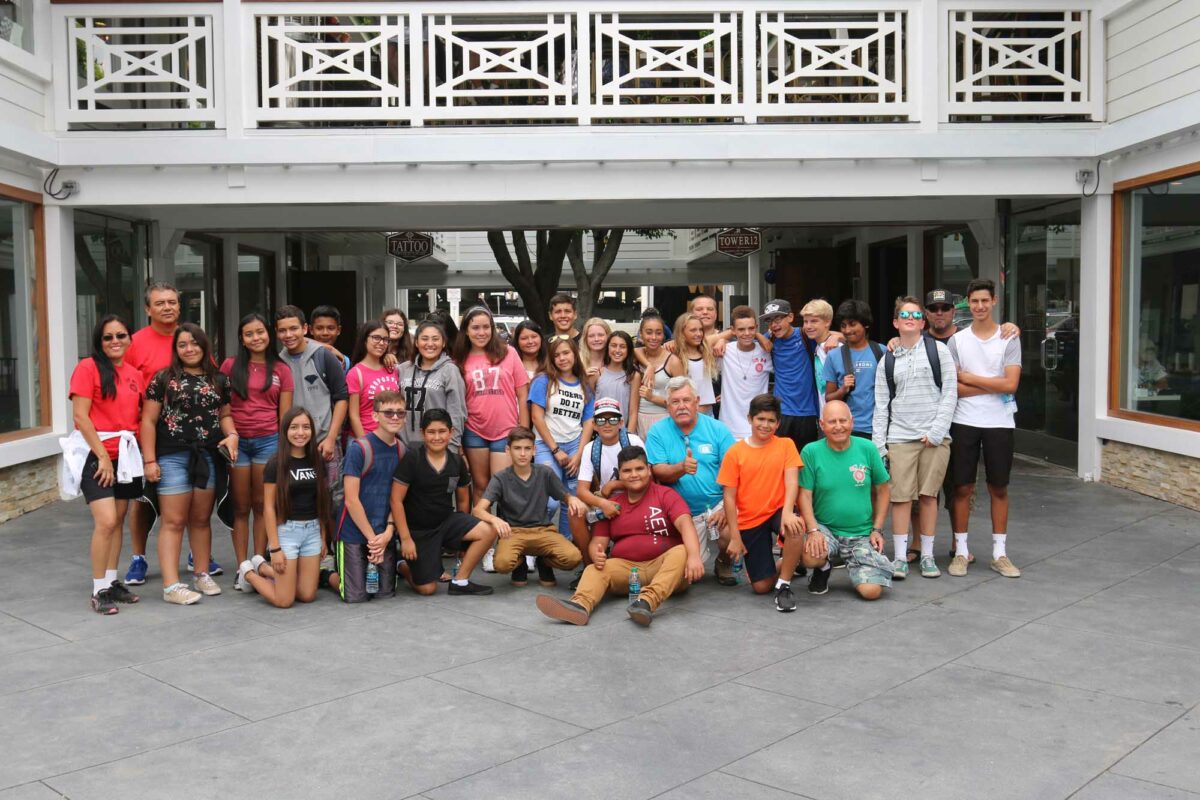 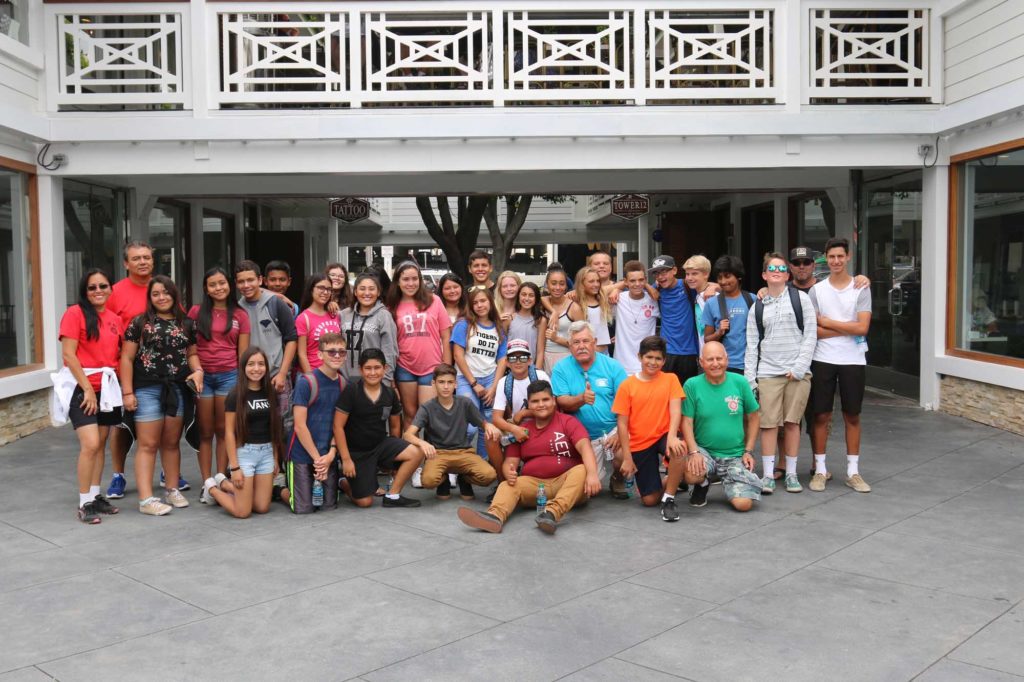 Students from the South Bay and Loreto, Mexico, along with chaperones and members of the Sister City program, gather at Hermosa’s Loreto Plaza this week. Photo

A mixture of Spanish and English filled the alley. Delivery trucks inched forward, nervously trying to reach their destination among a throng of kids. Spandex clad cyclists muttered under their breath as they found an unexpected crowd on their cut-through route.

Some three dozen middle school students had assembled near Hermosa Cyclery Monday morning, preparing to go on a bike ride along The Strand through the beach cities. The students were a blend of South Bay residents and visitors from Loreto, Mexico, in town this week for the student exchange program that forms the heart of Hermosa Beach’s Sister City program. As parents and chaperones struggled to corral the rambunctious kids, a kind of border-crossing lesson set in no matter what language you speak, organizing teenagers is never easy.

This year marks the 50th anniversary for Hermosa’s Sister City program. Members say the program continues to provide the valuable lessons that inspired its formation in the first place.

“The importance is exposing these students to another culture, another way of life. You can read about it in a textbook, but to understand it you really need to be in the arena,” said George Barks, vice president and longtime member of the program.

Hermosa’s sister city program began in the fall of 1967. Towns across the country had been forging international partnerships for the previous decade, after President Dwight Eisenhower, at the height of the Cold War, promoted the programs as a way to strengthen bonds with foreign nations.

Resident Jack Wise, who would go on to serve on the City Council, steered the selection toward Loreto, a town on the Sea of Cortez in the southern half of Baja, where he had gone on periodic fishing trips. Jack Belasco, mayor of Hermosa Beach at the time Loreto was chosen, wrote in a history of the program that although Loreto lacked a road, Wise and others would fly in on small private planes. (Wise again played a role in Hermosa’s relationship with Loreto, arranging a controversial land swap with the city in 1974 that created Loreto Plaza and allowed for the bridge structure that runs over the space and is now part of the Tower 12 restaurant.)

The student exchange program began in 1974 under the guidance of Joe Diaz. According to an obituary of Diaz, who died in 2008, the civic-minded Hermosa resident was on a trip to Mexico with his family when he heard his daughter reading an AAA manual in Spanish, and got the idea that the Sister City organization could incorporate a student exchange program. A small plaque honoring Diaz remains in Loreto Plaza to this day.

Nicolas Ruth, a 13-year-old student at Centro Formativo Catolico in Loreto, was among those mounting a bicycle Monday morning. He said he was enjoying his time in the South Bay, and planned to look for key chains to buy as presents for friends back home.

During the ride along The Strand, students from Loreto took in the beach-side architecture. Discussing a grouping of new homes near the border of Hermosa and Manhattan, they commented on how similar the large-windowed residences appeared.

“I like all the glass,” one girl said in Spanish.

The exchange program now sends middle-school students and parents from throughout the Beach Cities to Loreto for a week during spring break and welcomes Loreto students to the South Bay for a week each summer. A full roster of activities, including Monday’s bike ride and a trip to Disneyland, exposes the visitors to what Southern California has to offer.

Among those to have participated in the past is Gerardo Valadez-Mesa. Mesa is a science and special education teacher in Loreto.This is his 12th year serving as a chaperone. But his affiliation with the program goes back even further. He first visited Hermosa as a student in the summer of 1992. He was accompanied by his then-girlfriend, now his wife, who also serves as a chaperone for the program.

As if to confirm what drew Wise and others to the area decades ago, Valadez-Mesa stood on the Manhattan Beach pier Monday morning and, gesturing at the surfers below, said that fishing holds a comparable place in the hearts of Loreto residents. In the summer, anglers seek out mahi-mahi and marlin and can find yellowtail in the winter. Just before leaving for the South Bay, he went on a whale watching trip and saw pilot whales just off the coast.

Valadez-Mesa said it’s hard to say whether the South Bay or Loreto has changed more in the past 25 years. Hermosa seems so much more modern than it did when he came here as a student, Valadez-Mesa said. But Loreto has also changed, in part thanks to another aspect of the Sister City program: the paramedic exchange program. Begun in 1999, it sends firefighter-paramedics from the South Bay to Loreto to offer instruction on life-saving practices. The exchange, Valadez-Mesa said, has aided Loreto’s own modernization, in part by encouraging more tourism.

“We lack infrastructure, but we have been changing, and it’s been with the help of the firefighters,” he said in Spanish.

As the Sister City program turns 50, organizers are arranging for the installation of a new monument in Loreto Plaza, which will be unveiled in a celebration on Sept. 24. featuring live music and folklorico dancers. A monument installed about 20 years ago was taken out during the recent Loreto Plaza renovations. Barks said that the mural had been in decline before that.People seldom read the informational panel planted in the ground, and restaurant patrons often locked their bicycles to it.

The new monument, Barks hopes, will be a physical representation of the ideas behind the program: that travel and exchange are the best way to see what people in the South Bay have in common with others.

“People to people is the way you learn that everyone in the world really wants the same things,” he said.