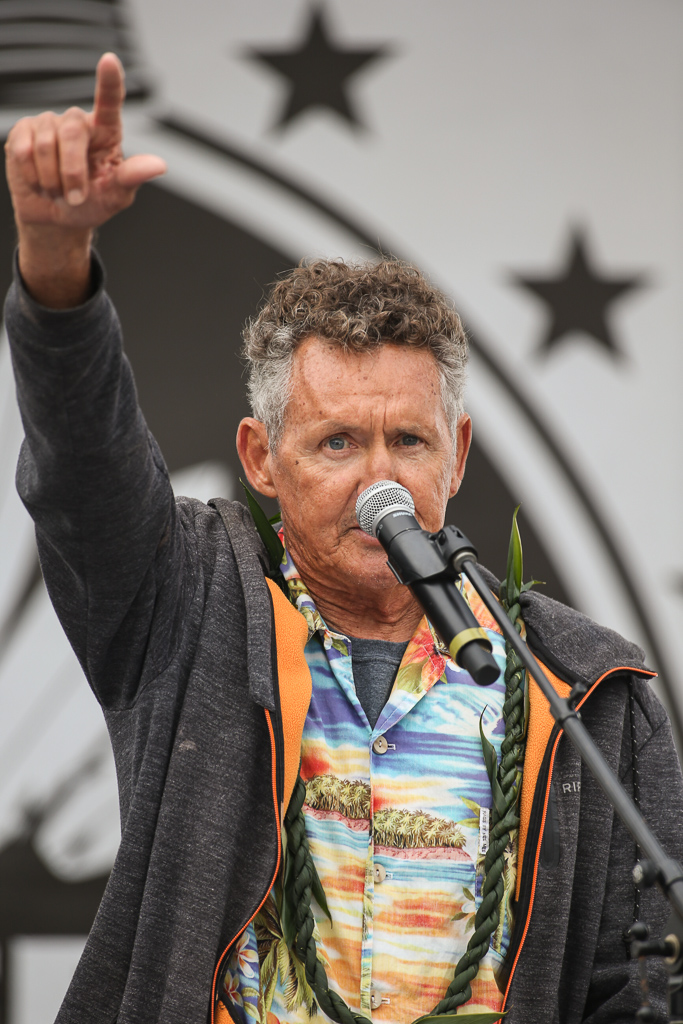 Surfboard shaper Pat Rayan expresses his appreciation for induction into the Hermosa Beach Walk of Fame. Photo by Mike Balzer

“I might as well address the elephant in the room,” surfboard shaper Pat Ryan said at the start of his Hermosa Beach Surfer Walk of Fame induction talk. Listening with anticipation were over 500 people who attended the 2019 induction ceremony Saturday morning on Pier Plaza.

“You’re all probably wondering why it took so long,” Ryan said. Then he paused long enough for stomachs to tighten among his friends in the audience..

“Pat, don’t go there.” None said it aloud. But that’s what they were praying.

Ryan learned to shape when he was 15 from the legendary Greg Noll. At 66, he continues to shape, “for the pros and the average Joes,” as his friend Vince Ray said when he introduced Ryan.

Ray made his point by noting that the previous evening, at the South Bay Boardriders Big Wave Challenge awards, Jeff Jones was honored for riding the winter’s biggest wave on a Pat Ryan board. Chris Rodriquez received the award for worst wipeout, also on a Pat Ryan.

Ryan has been nominated for the Walk of Fame almost every year since its founding in 2003.

His supporters knew the elephant in the room was why it took almost two decades for the Hermosa shaper to be inducted.

Ryan was too much the gentleman to complain Saturday’s honor was overdue. But also, too much the prankster to resist toying with his audience.

“You’re wondering why it took so long —  to get your boards?” he said. “It was the glass shop’s fault. It’s never the shaper’s fault.” It was a funny punch line for anyone who has ever waited for  a custom surfboard. It was fall out of your chair funny to anyone familiar with Walk of Fame politics.

Later in his remarks, Ryan alluded to the controversy by thanking friend Joey Lombardo for threatening Mike Purpus with “no more Cove surf trips” if Purpus didn’t vote Ryan onto the Walk of Fame. Purpus is a Walk of Fame judge and doesn’t drive.

He thanked his mom for driving him from Pt. Conception to the Mexican border and allowing him to convert their garage into a shaping bay when he was young.

He thanked sons Andrew and James and all Hermosa surfers for their support. He added, “On behalf of all local shapers.” He thanked ET Surf, “the happiest place on earth, for allowing me to make a job out of a hobby.”

Then he told of talking last month to Redondo native Jeff “Mr. Sunset” Hakman, who, in 1965, at 17, won  the inaugural Duke Kahanamoku Hawaiian Surfing Classic at Sunset Beach.

“Jeff told me he had just caught the best wave of his life. He turned 70 last month. Our best waves are in the future,” Ryan said.

Also inducted into the Hermosa Beach Walk of Fame on Saturday were former pro surfers Liz Benavidez and Ronnie Gardner and The Beach Boys. 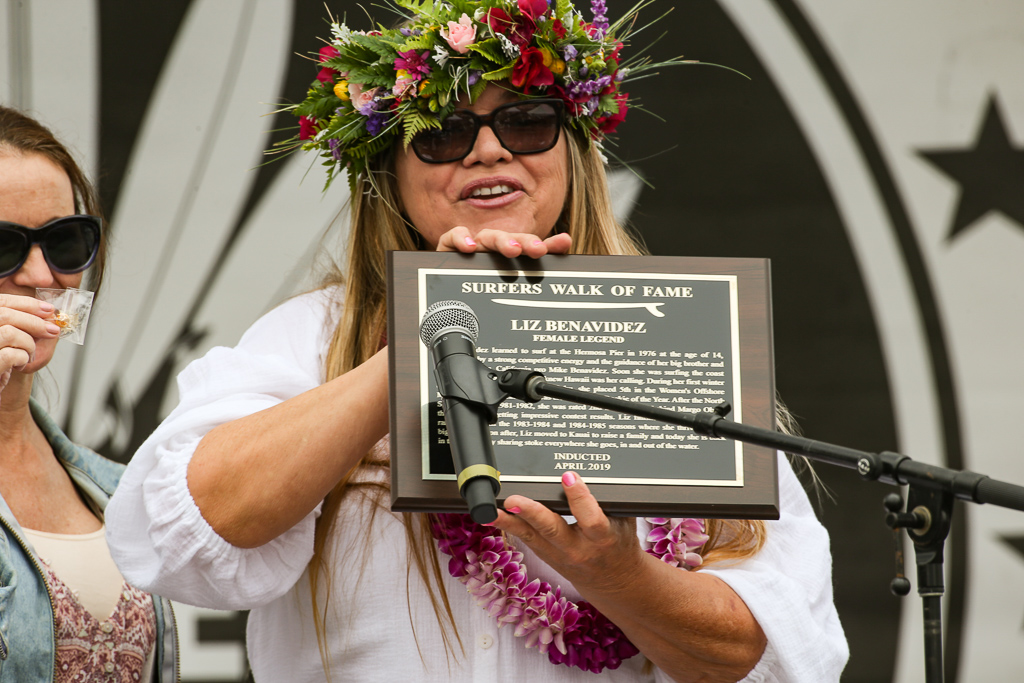 Benavidez noted that her first board was a rounded pin tail shaped by fellow inductee Ryan, a design she still favors today.

The aggressive style she learned from her brother Chris, a fellow pro and a 2015 Walk of Fame inductee, helped her place second in her first pro contest, the Hawaiian Offshore Masters at Sunset in 1983. That year she earned rookie of the year honors.

She said part of what motivated her was knowing if she didn’t finish in the top three, she wouldn’t get a share of the scarce sponsorship money. Among her sponsors was ET Surf, where she worked alongside Ryan.

Benavidez congratulated the World Surf League for making the men’s and women’s prize money equal this year. (The WSL Big Wave Awards will be held Thursday evening in King Harbor, in partnership with the BeachLife Music Festival). 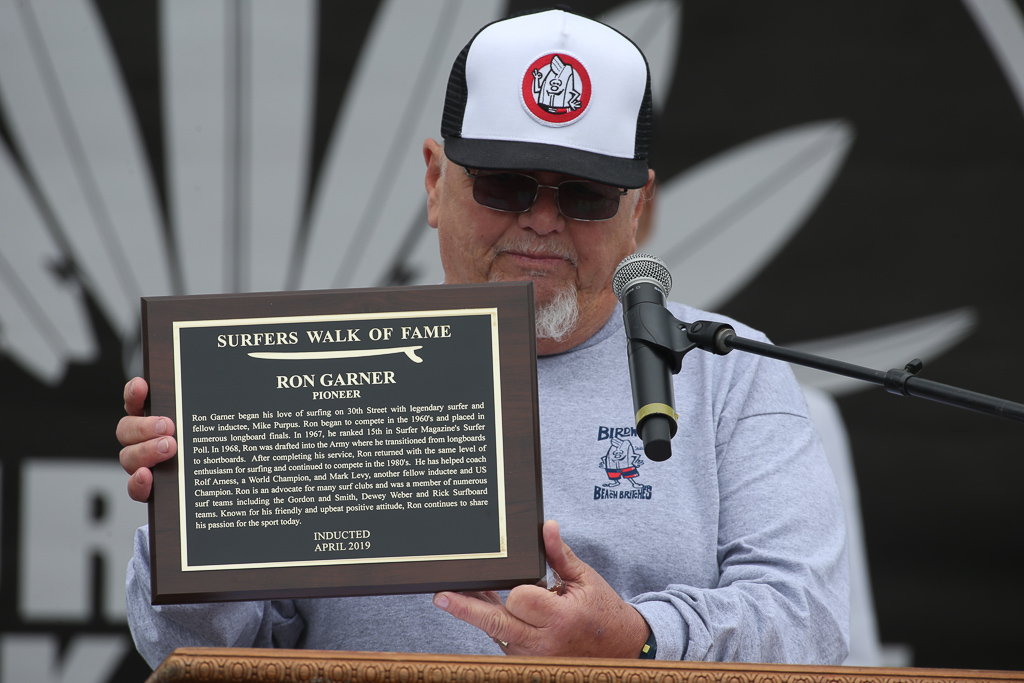 Ronnie Garner competed on the Weber and Rick surf teams in the late 1960s, prior to being drafted into the Army in 1968.

Garner expressed the spirit of Surfing’s Golden Era by noting, “People used to ask me if I was good. I said, ‘I don’t know. But I have a good time.’”

He acknowledged a rough stretch in his life, and thanked his wife Louise for keeping him sober the past 34 years.

“Marry a Navy nurse,” he recommended. 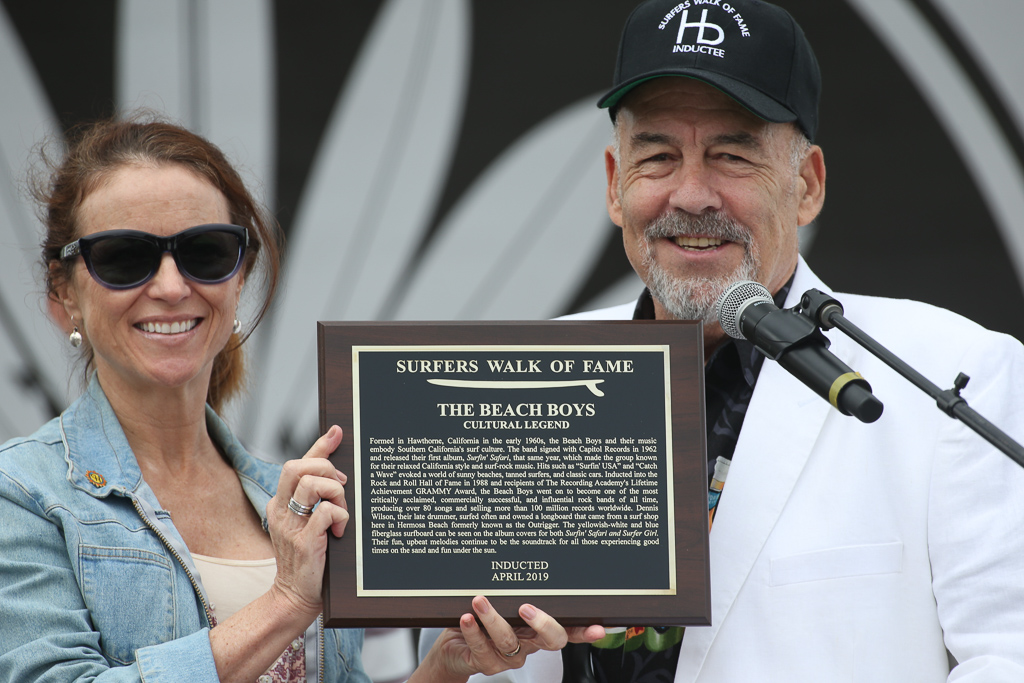 Walk of Fame judge John Joseph spoke on behalf of the morning’s fourth inductee, who did not have a personal representative at the ceremony, but whose music was used to signal the other inductees when their five minutes to speak were up.

“They started as a garage band known as the Pendletons in Hawthorne in 1963. They went on to record 36 top 10 singles and were inducted into the Rock and Roll Hall of Fame in 1982. Rolling Stone magazine listed them as the number 12 rock group of all time,” Joseph said.

The Beach Boys co-founder Brian Wilson lived in Hermosa for a time and recently told BeachLife Magazine writer Jeff Vincent, “It’s where we wrote so much of our early music. I can remember the first song I ever wrote, ‘Surfer Girl,’ with those beaches in mind.”

Wilson will headline the BeachLife Music Festival this Saturday, May 4, in Redondo Beach. ER