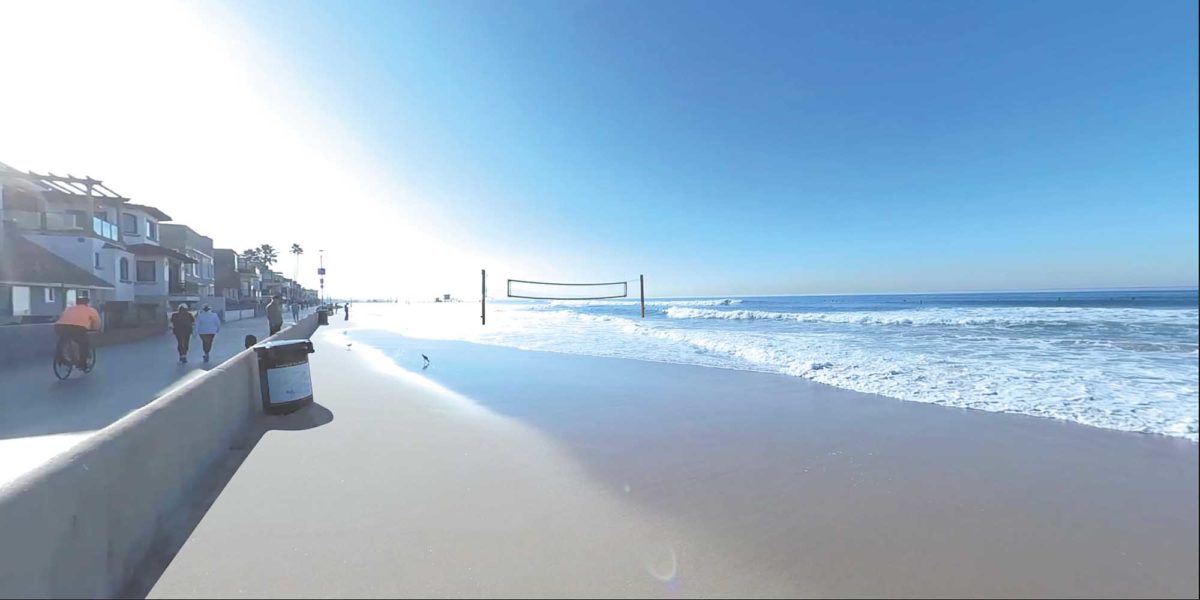 A view of what the beach at the northern edge of Hermosa would look like with three feet of sea level rise, from a virtual reality simulation the city debuted this week. Images courtesy City of Hermosa Beach

It’s one thing to hear “three feet of sea-level rise.” It’s quite another to see the waves overtake your favorite volleyball court.

The difference between those two experiences is at the heart of Look Ahead Hermosa Beach, a new, city-sponsored initiative that uses immersive, virtual reality technology to show what Hermosa’s beaches and coastal attractions would look like under various scenarios of rising sea levels associated with climate change. Hermosa officials are betting the experience of seeing beloved places transformed by the ocean will help bring home the seriousness of rising sea levels, and perhaps lessen some of the resistance that has limited the city’s previous efforts to address climate change.

“Look Ahead Hermosa Beach is a valuable public education program that will make it possible for community members and visitors to visualise the impacts of sea level rise to help increase their awareness and engage them with the city in determining how to reduce carbon emissions and get involved in climate solutions,” Mayor Mary Campbell said in a statement.

The project is the result of a collaboration with Climate Access, a nonprofit that works with government and research organizations addressing climate change. Meredith Herr, deputy director of Climate Access, said in an interview that the organization began partnering with cities in Northern California in 2015, when it installed digital tower viewers, the coin-operated binoculars that are commonly mounted on municipal piers and scenic vistas. Instead of showing a close-up look at the wildlife or landscapes of the present, viewers could peer into a future of receding coasts. Climate Access has since moved into the virtual reality, Herr said, but the goal remains the same.

“Humans are such visual creatures. Even if you know these impacts are coming down the pike, seeing them is a very different experience,” Herr said. She recalled witnessing previous demonstrations of VR technology in Northern California in which people gasped. “They’re having a very emotional, clear reaction to flooding in these places. VR can be a powerful community outreach tool.”

Look Ahead Hermosa, which debuted in a public demonstration Wednesday on Pier Plaza, features representations of places like the Pier and the beach at the city’s northern edge. In the latter, the participant gets two views from The Strand: one, in which the sand shines brightly and an empty volleyball court awaits players; and another, intended to simulate three feet of sea level rise — a figure well within the range of what climate scientists forecast for the 21st century — in which the tide reaches all the way to the Strand wall. In an eery touch, the viewer can turn 360 degrees to take in surrounding homes and scenery, and the sound of crashing waves follows wherever the gaze lands.

Wednesday’s demonstration used an Oculus VR headset, which Herr described as the ideal way to experience Look Ahead. But the project can also be seen using a combination of a mobile phone and Google Cardboard, a feature that allows YouTube videos to be experienced in three dimensions by mounting a phone inside a low-tech viewing device. The city will post signs in places near the coast indicating where the simulations are based, featuring QR codes that people passing by can scan with their phones.

Recent research has shown that coastal cities are more vulnerable to rising seas than previously thought. While scientists have modeled various sea levels based on increases in mean global temperature and associated emissions reductions, most of these studies have produced what oceanographers call a “static tide level.” That figure, akin to the numbers on a tide calendar, can mean different things depending on local factors, such as the presence of large waves from a storm, or beach erosion. In Hermosa, for example, a high tide that coincided with huge waves generated by a storm during the El Niño winter of 1982-83 pushed ocean water into Good Stuff restaurant on The Strand. Many climate change models indicate that rising global temperatures will produce more frequent, intense storms; the pounding waves they produce may accelerate erosion.

In March 2019, scientists with the U.S. Geological Survey published a paper in the journal Nature, which was among the first to comprehensively look at how rising seas might interact with some of these factors along California Coast. (The USGS is also a partner in Look Ahead Hermosa, the city said.) The results were devastating: “Dynamic flooding,” in which a high tide combined with, say, a large winter storm, could jeopardize $150 billion worth of property by the end of the century. By comparison, California wildfires in 2018, the most damaging year on record, produced $11.4 billion in insurance claims. More than 600,000 people could be impacted, the USGS found.

Above is a current view the beach at the northern edge of Hermosa. Below is a visualization of the area with the return of coastal dunes and beach grass to blunt some of the effects of sea level rise.

Herr said that Look Ahead is intended to do more than scare people. The experience also includes simulations of possible remediation measures, such as building large berms near the Pier or the return of coastal dunes dotted with beach grass, that could mitigate the reach of the tide. Permanent structures, like seawalls, would require state approval, which regulators have in recent years been increasingly hesitant to approve.

In the event that sea level rise ends up on the higher end of what models forecast, Hermosa and many other communities may simply be too close to the shore for any structure to be of help. In December, at a special session of the California State Assembly’s Select Committee on Sea Level Rise and the California Economy, Mark Merrifield, director of the Center for Climate Change Impacts and Adaptation at the Scripps Institute of Oceanography, made a presentation that showed berms and dunes being gradually overtaken under various scenarios of sea level rise. The graphic suggested that some coastal communities may need to consider relocating residences and businesses, a policy known as “managed retreat.” Managed retreat has never been mentioned as a possibility for Hermosa; attempts to address it in other cities, such as Del Mar in San Diego County, have proven so controversial that it is taboo to even mention in city documents.

Although warnings about the threat posed by global warming have been around for more than three decades, the response has yet to match the scale of the crisis. In an essay in The New Yorker last year, novelist Jonathan Franzen attributed the hesitancy of societies to act decisively on climate change to the uneven distribution of the destruction it will wreak. Climate change, he argued, is a problem whose effects are sufficiently scattered that by the time there is political momentum for solutions, it will be too late to reverse.

“It will take the form of increasingly severe crises compounding chaotically until civilization begins to fray. Things will get very bad, but maybe not too soon, and maybe not for everyone. Maybe not for me,” Franzen wrote, imagining the perspective of the person reluctant to commit to action to limit global warming.

While some scientists criticized the resigned-to-doom tone of Franzen’s essay, his assessment of public response to the crisis reflects the modern understanding of how people are motivated to confront environmental issues. In a 2016 article in the Philosophical Transactions of the Royal Society, Cornell communications professor Jonathon Schudt described “psychological distance” and “unfamiliarity” as two challenges researchers confront in communicating on environmental topics.

VR may be able to assist in this regard. Herr pointed to a 2018 study from Stanford in which participants underwent an immersive VR simulation of the effects of ocean acidification; the experience had a statistically significant impact on concern for the issue.

“It’s taking something where people can feel fatalistic, and making it feel tangible, personal and local,” Herr said.

It’s less clear, however, that VR will be able to address the third obstacle Schudt identified: the “politicization” of environmental issues.

Look Ahead Hermosa is part of the city’s effort to obtain certification of its Local Coastal Program (LCP). Hermosa is one of more than two dozen regions on the California coast lacking a state-certified LCP, the collection of plans and ordinances that cities with land in the coastal zone create to address local implementation of the Coastal Act, and which allows them to issue Coastal Development Permits for projects in their jurisdiction.

The California Coastal Commission, the state body charged with enforcing the coastal act and certifying LCPs, has required cities to address sea-level rise since 2015. (Many of the cities who already have certified LCPs obtained approval in the ‘80s and ‘90s, and have had to amend their programs.) The commission’s latest guidelines, issued in late 2018 before the release of the USGS study, urge cities to include “scenario-based analysis” in drafting their LCPs, in order to understand “where and at what point sea level rise, and the combination of sea level rise and storms, pose risks to coastal resources or threaten the health and safety of a developed area.”

The lack of a certified LCP adds to the cost and complexity of development in a city. Without one, permitting decisions must pass through the Coastal Commission’s regional office, in Long Beach, instead of being processed entirely within Hermosa’s planning department. Hermosa’s push to obtain approval of its LCP accelerated during the crafting of PLAN Hermosa, the city’s updated General Plan, which was approved by the City Council in 2017. (Much of what the LCP will ultimately consist of is contained in PLAN Hermosa and associated zoning ordinances.) In the lead-up to the council’s approval vote, city staff successfully sought a series of grants from the state to help fund the planning process. In one application, from 2016, city staff wrote, “PLAN Hermosa contains a carbon neutral goal and numerous policies to substantially reduce City and community greenhouse gas emissions.”

That carbon neutrality goal is no longer a part of the city’s General Plan. It was jettisoned from drafts amid a public uproar over policies that might have been required to achieve it city-wide by 2030 or 2040. Many of the speakers at the public meetings that led to the nixing of the carbon neutrality goal mixed climate change skepticism with expansive concern for property rights.

“You’re going to force us to purchase credits for global warming that isn’t even bought into by a huge segment of the population?” resident Miles Johnson said at the time.

Look Ahead Hermosa includes some information about the city’s efforts to lower carbon emissions, and does so in a way that appears designed to minimize feather ruffling. Amid the dizzying visuals of a changed seascape, written messages blend into a blue horizon in a tableaux that suggests the inoffensive whimsy of a skywriter.

But it nonetheless embodies the message scientists and state regulators are trying to communicate. Merrifield, of the Scripps Institute, said at the Assembly committee hearing in December that the uncertainty associated with sea level rise is reason to focus as much as possible on limiting the increase in global warming.