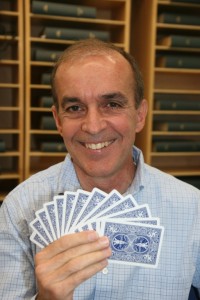 Jeff Grotenhuis is a fan of the fan. Photo by Robb Fulcher

A sweeping study by researchers at Albert Einstein College of Medicine in New York found that playing bridge, chess or a musical instrument helps ward off dementia, including Alzheimer’s disease. And local bridge teacher Jeff Grotenhuis says the game he loves builds social bridges between players while it is building synaptic bridges inside their heads.

Grotenhuis, a soft-spoken, elfish ambassador of the complex card game, whose eyes twinkle when he ponders the playing table, will teach a beginners’ class through the city’s recreation programs 9:30 a.m. Mondays, beginning Jan. 16, at the Kiwanis clubhouse on the edge of Hermosa Valley Park.

He is already teaching in El Segundo, where six tables of mostly senior-aged players develop their skills, each one with a partner sitting opposite.

Grotenhuis – whose parents and grandparents played bridge, and is certified to officiate at American Contract Bridge League tournaments – has his students learn by playing the game right away, with instruction.

“On the first day in Jeff’s class we were playing hands of bridge,” Lytle said. 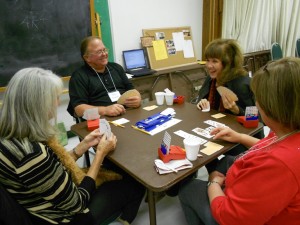 Grotenhuis casts a wide net – his classes are for beginners, returning players, people who are not proficient with cards at all. Students can bring partners or come alone. One of his students had been forbidden from playing cards as a child, and had only played Go Fish.

Most of the El Segundo students are seniors, but one is a home-schooled teenager.

Grotenhuis said young people are turning more frequently to bridge, perhaps as an offshoot of video and internet games. A cover story in “Bridge Bulletin,” a glossy monthly magazine of the ACBL, shows a half-dozen pleasantly nerdy, 20-something men who comprise the youngest ever U.S. Bermuda Bowl team.

Bridge is one of the most popular card games in the U.S., despite or because of its complexity.

Grotenhuis said one retired woman began taking lessons in El Segundo a year ago and now regularly hosts three other students for games at her home.

According to the Albert Einstein study, seniors who regularly exercised their minds with activities such as bridge, chess or other board games, and playing instruments, decreased the risk of Alzheimer’s disease and other dementias by as much as 74 percent.

The activities are believed to boost the brains of people of all ages, but the fate of seniors is increasingly discussed as the bubble demographic of “baby boomers” ages.

Tops among various physical activities, dancing, which has a significant mental as well as physical component, cut the risk 76 percent.

“Bridge is a complex game, and it’s fascinating once you learn it,” Grotenhuis said.