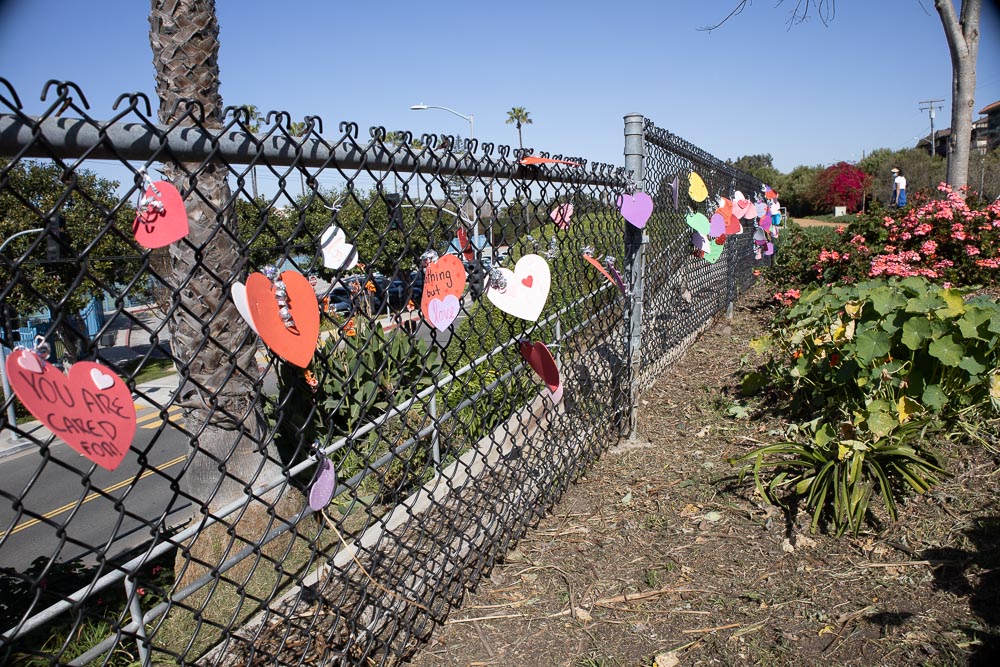 Paper hearts lined the fenc on the Hermosa Beach Green Belt, across the street from Hermosa Valley School.

At least six full time Hermosa Beach School District employees, including the district’s only physical education teacher, will receive layoff notices, under a budget unanimously approved by the school board at its Wednesday, Feb. 25 meeting.

“I really believe that all programs are valuable and all staff are valuable,” said Superintendent Jason Johnson. “By no means we’re these decisions made easily.”

Decreased enrollment, overstaffing and a significant decline in revenue over the past three years were identified by Johnson as reasons for layoffs. Since the pandemic began, 160 students have left the district. Kindergarten and second grade saw the biggest drop in enrollment, losing 35 and 37 students, respectively.

Johnson had presented a three-year budget projection at the Feb 10 Board meeting that showed the district having a $585,000 deficit.

Three transitional kindergarten through fifth grade teachers are among those receiving lay off notices. The dedicated physical education teacher position  will be eliminated, though PE will continue to be taught.

“Elementary school teachers have a multiple subject credential,” Johnson said. “That means they’re qualified to teach all subjects, including PE.”

Kelsey Hendricks, who teaches PE at Hermosa Valley School, said in a public comment to the Board that instructors who aren’t credentialed specifically to teach PE won’t be able to give the same quality lessons.

“Students have been cooped up for months because of Covid-19,” Hendricks said. “We need to keep students moving with a strategically designed physical education program provided by credentialed physical educators.”

will also see a reduction in part time educators.

Garrett Kaplan, who launched the IDEA Lab in 2015, protested the cuts in public comment to the Board. “I believe it is imperative that students continue to be introduced to technology and engineering concepts,” Kaplan said. “We should be promoting the program instead of cutting it, to stand out against competing school districts.”

State law requires layoff notices to be issued by mid March, prior to the final budget being adopted. Johnson expressed hope that additional State and Federal funding might enable the district to rescind some or all of the layoff notices.

A total of 38 students chose to continue remote learning from their homes for the remainder of the school year: 17 third graders, 8 fourth graders and 13 fifth graders.

The school district hopes to reopen sixth grade for in-person classes by mid-March and to bring seventh and eighth students back as well before the school year ends.

Allowing sixth, seventh and eighth grade students to return to campus is complicated by the fact that the upper grade students move to different classrooms and mix with different students throughout the day, Johnson explained.

“This makes it problematic to reopen campus under a sixth period schedule when students can only attend one class and that one class also has to be half the size of a typical sixth grade class,” Johnson said. “We’re in the process of finalizing a schedule that would support a sixth grade reopening under current protocols.” ER