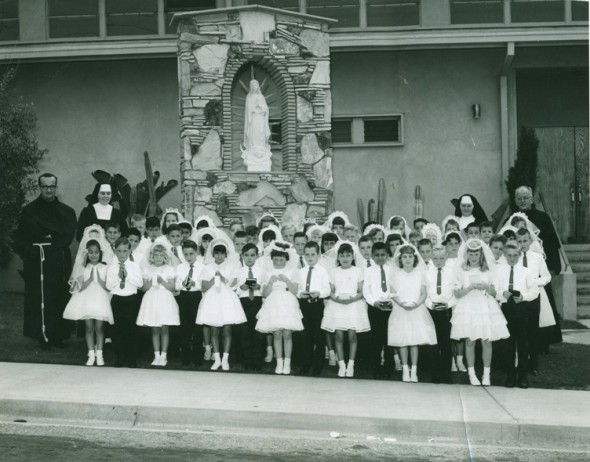 When parishioner Daniel L. Villa attended Hermosa’s Catholic school a half century ago, the teachers wore habits. The nuns were warm and caring, and his favorite, Sister Ann Marie, seemed to glide the earth rather than walk.

“We always thought she was a floating angel,” he said.

“She was very kind,” Villa remembered. “She was a very young nun back then, and we thought in those days she floated, because of the way she walked. We couldn’t see her legs, just her feet. She was very angelic. She was a great teacher. We always thought she was a floating angel.”

As Our Lady of Guadalupe School turns 50, Villa is among many early students and stewards reflecting upon the determined man who built it, their iconic images of nuns variously warm and strict, and the tight-knit feel of a cozy educational community bonded by devotion.

But the jubilee at Our Lady of Guadalupe School looks to the future as well, celebrating recent campus renovations including a modernized technology program, and preparations to open a preschool for 3- and 4-year-olds next fall.

When the auxiliary bishop of the archdiocese of Los Angeles arrives to bless and rededicate the small, kindergarten-through-eighth grade school on Oct. 9, many of the earliest graduates will return to the modest campus that is tucked away off Prospect Avenue in the southern part of town, where it nestles beside the parish church. 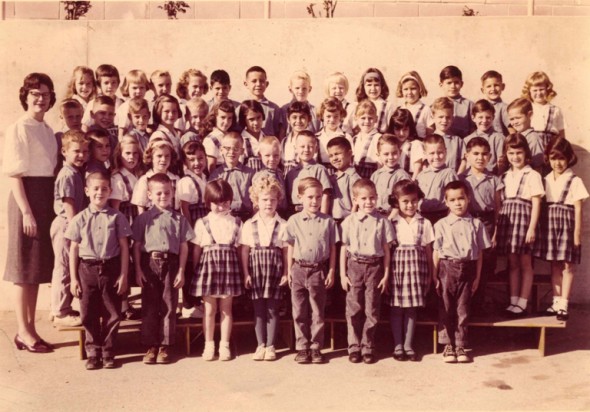 Mrs. McGoldrick shows off her first grade class in 1964.

When Villa began first grade, in Our Lady’s inaugural year, the school offered only first through fourth grade classes. Additional grades were added as he went along, like a road being laid before him. He was blessed with the floating angel in fourth grade, and he studied at the school until his eighth-grade graduation. Our Lady would add a kindergarten class in 1985.

“At first, the only sport we had was basketball,” said Villa, who currently serves on the school’s executive board.

“There were four Carmelite nuns,” Villa said, referring to the Oklahoma City order that gave the school its initial principal and three teachers.

“I had a great education. It was a very spiritual experience because the nuns had a Carmelite atmosphere around them,” Villa said, describing the sisters as welcoming, hospitable and devoted to their fellows.

“They prepared us to be good Catholics and model citizens. The foundation of my education goes back to those Carmelite sisters. They were very loving sisters, they gave their all for our education,” Villa said.

“In those days there were about 30 students per class, no teacher’s aide or anything,” Villa explained. “That was hardcore teaching – no aides, no technology, the handouts were created and provided by them.” 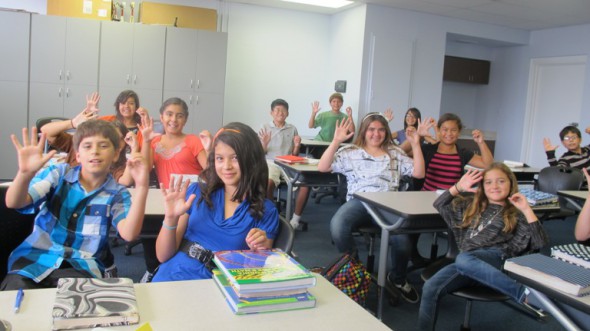 Our Lady’s student body, which fluctuates with the economy, currently stands at 165. It has been as high as 255, before the aerospace downsizing of the 1990s took its toll, and the current economic slide cost the private school some more students.

Catholic schools across the Los Angeles Archdiocese serve 80,000 students and make up the third largest school system in the state. Nationwide, more than two million students attend Catholic schools, and about 15 percent of them are non-Catholic.

Villa continued his Catholic education at Bishop Montgomery High School in Torrance, before earning an MBA at the University of Pedderdineand becoming an executive vice president forInglewoodParkCemetery.

“I found myself well prepared for [high school] socially, spiritually and academically,” he said. “I feel that was because of the foundation they provided [at Our Lady] that I was able to excel in high school. In those days it was yes sir, no sir, yes Sister, yes Father. They taught us to respect adults, to respect authority.” 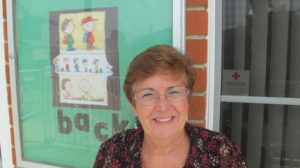 Villa described himself as “an average student” and said “I had to work for my grades.”

His two sons also attended Our Lady of Guadalupe – named for the patroness of the Americas– and Dominic is now a junior at Santa ClaraUniversity, where he studies mechanical engineering, and Ben is a junior at Bishop Montgomery, where he starts at center on the football team.

Villa said Our Lady “has changed a lot, for the better. There’s more participation by the parents with the teachers nowadays. Because of the economy it has to be a parent-teacher team to see that the kids are educated properly. And when the school is short of funds, parents come together and hold fundraisers.”

“Before, the sisters were in complete charge, and they were able to manage it. But perhaps it’s a better team now,” Villa said.

He said the school continues to evince “a strong sense of family and community that others may not provide. If you go to Our Lady everyone knows everyone.”

Villa is one of many with strong, deep roots to Our Lady. Twenty-year Principal Cheryl Hunt said current eighth-grade teacher Robin Skibiski attended the school, as did her children in their turn. First grade teacher Tara Scully also is a graduate, and fourth grade teacher Kristine Xifo’s children attended Our Lady.

Hermosan Teresa Mangiali, who was Teresa Gilner when she graduated from Our Lady in 1974, recalled how noted American writer Leonard Wibberly, author of “The Mouse That Roared,” used to read to her first grade class taught by his wife.

“I still run around with some of my girlfriends from first grade,” she said. “Being a small little community with small classes, we developed strong bonds.”

In those days, she said, there was a paddle in the principal’s office.

“I was a good student,” she said. “I did not go to the principal’s office.”

Our Lady of Guadalupe Catholic Church began in 1920 as a catechism school and then mission of St. James Parish in Redondo Beach, the mother church of Our Lady. Ground was broken for Our Lady of Guadalupe School in May 1961, and the parish enlisted the services of the Carmelite sisters to teach, according to a church history written by Fr. Peter Mallin, OFM, Conv., chaplain at Little Company of Mary Hospital.

Classroom space was catch-as-catch-can while the school building was under construction, but on Oct. 2 all the students moved from church buildings into the school proper.

“He was a determined man. He knew what he was about. He needed to finish the church, build a school, and get it paid for,” Mallet said. “He saw the need for a Catholic school, and upon completion of the church he built the school, and paid for both.”

Both the “new” church and the school were funded in the 1960s by “donations and many tamale sales,” Mallet said.

“I want our people today always to remember what we have,” Mallet said. “It was a wonderful, wonderful gift from those founding families of Hermosa Beach.”

Since then the parish has grown to 2,500 families, and in the first years of a new century, it has again become time to gather stones together at the church and the school.

A significant renovation of the church was completed recently, providing new stained glass and artwork and a remodeled friary housing six Franciscan friars. Along with the renovation came 252 rooftop panels that made Our Lady the first of 302 parishes in the Los Angeles Archdiocese to convert to solar power, with the largest such installation in Hermosa.

The school has undergone additional construction as well, and its technology program is being upgraded.

“We are integrating Smart Board technology into the classrooms for more interactive teaching,” Hunt said.

Smart Boards are interactive white boards that use computer projections to serve as large touch screens, allowing teachers to reinforce their lessons with videos and other tools.

“Children have become more visual learners than they were in the past,” Hunt said. “You can’t just stand up there and lecture.”

A computer on wheels, known by the acronym COW, is making its way from classroom to classroom in the morning, interacting with laptops provided to the kids as they learn various computer skills. In the afternoon the kids continue to use the laptops as the teachers see fit.

“We are really excited about all the changes,” Hunt said.

“We are trying to build a 21st century classroom, with the latest and greatest technology,” Villa added.

Mass will be celebrated at 11:30 a.m. by Bishop Alexander Salazar, the auxiliary bishop of the archdiocese of Los Angeles. Following mass he will bless and rededicate the school to Our Lady of Guadalupe, and the school will hold an open house showcasing the new and remodeled, technically enhanced classrooms, and will host an alumni reunion with refreshments.

The church is encouraging alumni and their friends to attend. Information can be found on the school’s Facebook page, “Our Lady of Guadalupe School Hermosa Beach,” and emails can be sent to olg50years@gmail.com to add a message to a “gratitude banner.”