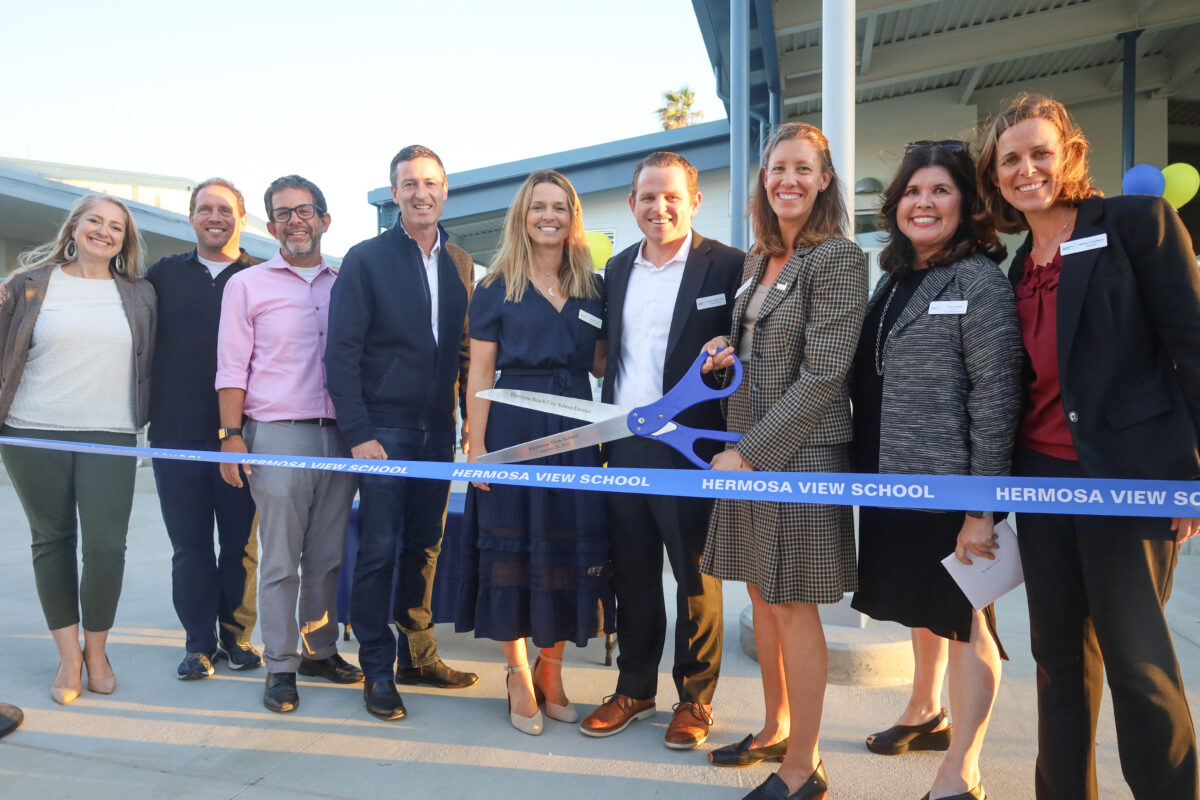 Hermosa Beach School Board President Maggie Bove-LaMonica, and Superintendent Jason Johnson are joined by the school board and construction team in cutting the ribbon for the newly remodeled Hermosa View School.

“The state of the schools is good,” Hermosa Beach School Board President Maggie Bove-LaMonica declared at the start of her State of the Schools address last Wednesday, October 26. The address took place  in the multi-purpose room of the newly remodeled Hermosa View School. The remodel was made possible by a super majority (66 percent) approval of Measure S in 2016. The $59 million construction bond funded remodeling of Hermosa View, and Hermosa Valley, and the construction of Hermosa Vista on the former North School site. 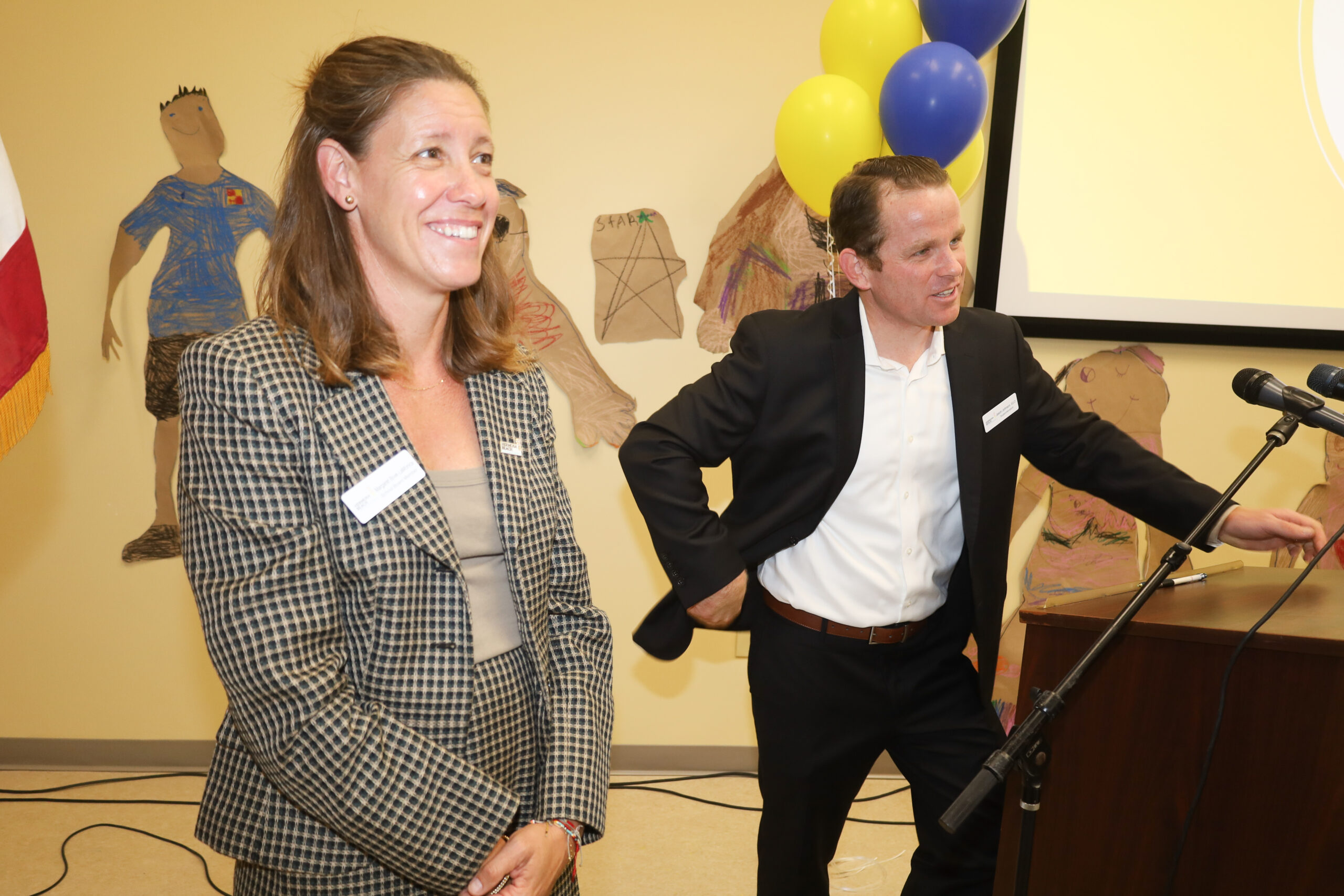 Hermosa Beach School Board President Maggie Bove-LaMonica, and Superintendent Jason Johnson prepare to give their State of the Schools addresses. Photos by Kevin Cody

HBCSD is among the top 5 percent of California districts in academic scoring, despite being one of the lowest funded, Bove-LaMonica said in support of her opening remark.

Other signs of the district’s health, she said, are:

The district also received the California Pivotal Practice Award for the social, and emotional well being of its students during the pandemic; and the local Foundation Club of the Year 2022 award. Friendship clubs match special needs students with their other classmates.

Superintendent Jason Johnson, in his remarks last Wednesday, compared the district’s response during the pandemic to its response following the 1933 Long Beach earthquake, which destroyed Pier Avenue School. 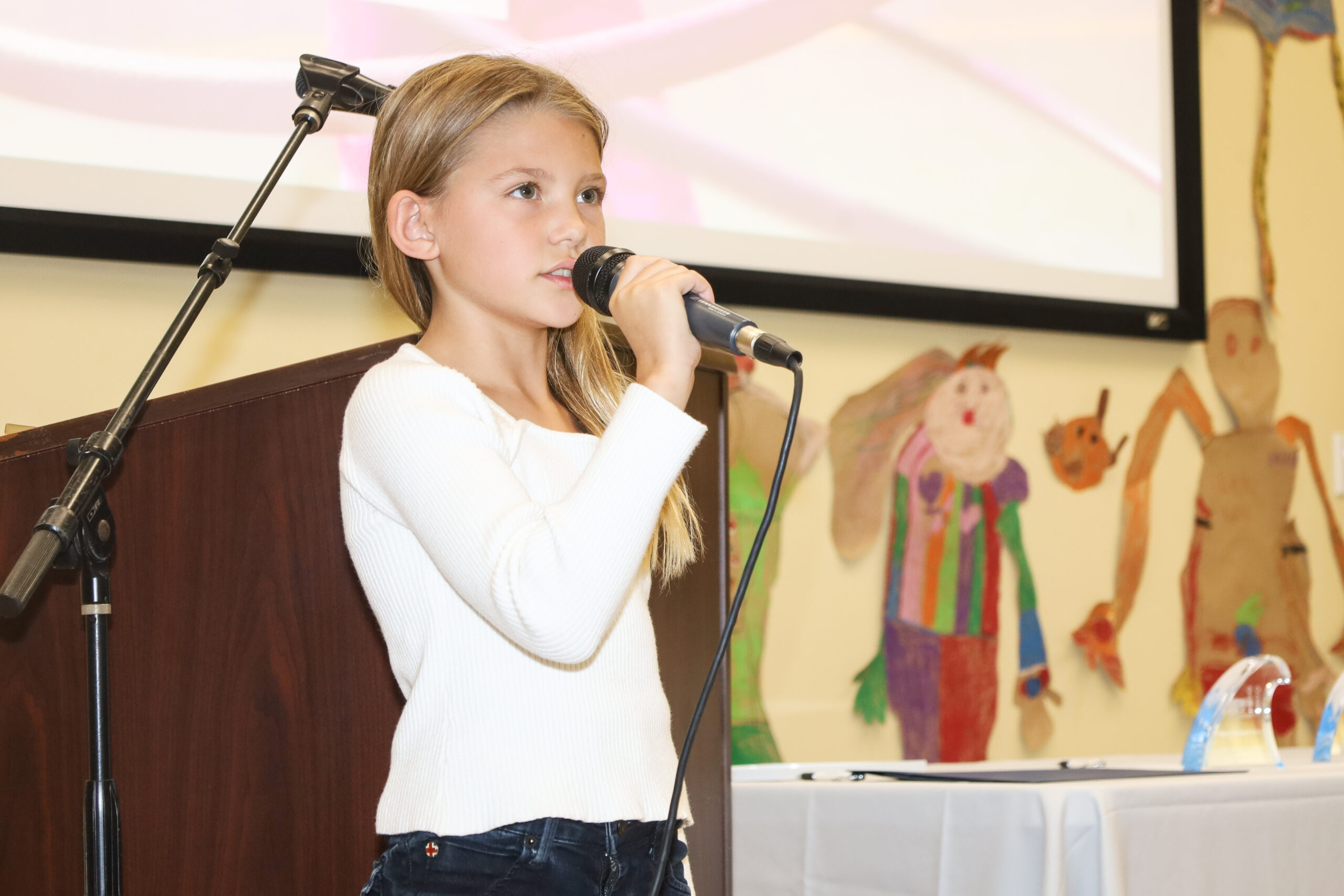 “Following the earthquake, local residents, just like the people in this room tonight, rebuilt their school,” he said.

“During COVID, residents made the decision to move forward with building Hermosa Vista, and remodeling Hermosa View and Hermosa Valley,” he said.

“We saw other communities torn apart during COVID, and we didn’t have to look far. But Hermosa is a special place. We prioritized what was important. We worked together, and became one of the first school districts in the state to bring kids back on campus. I’m proud of the way we worked together,” Johnson said.

Johnson and Bove-LaMonica thanked the many community groups that supported the district through the pandemic, including the teachers association, the Ed Foundation, the PTO, the city, and the police, and fire departments. 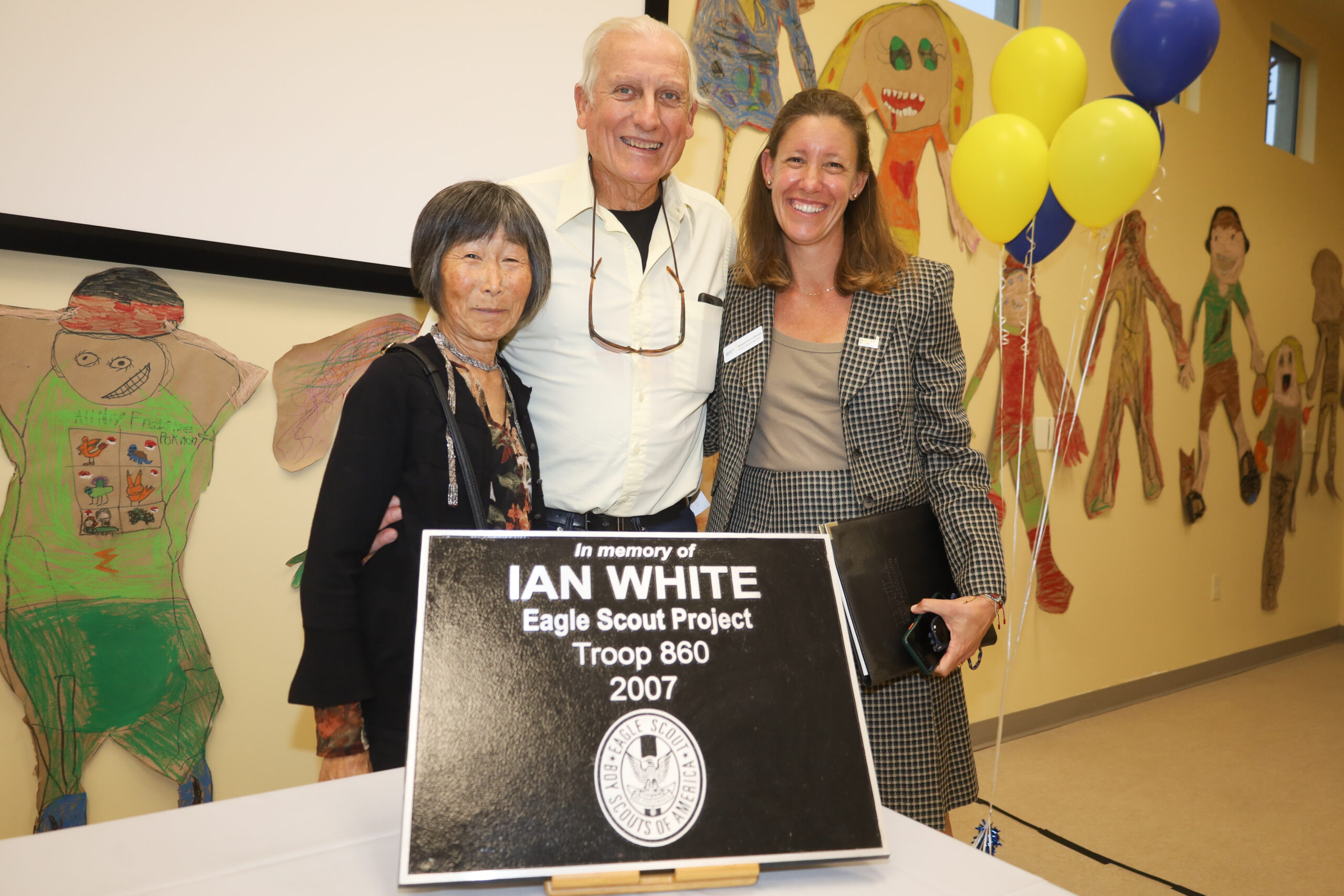 Karen, and Allen White, and School Board President Maggie LaMonica with plaque commemorating the White’s son Ian, a Hermosa schools Eagle scout who succumbed to cancer in 2010.

The two presented an engraved, crystal surfboard fin to Erickson Hall Construction Manager Nancy Bartolo in appreciation for her work over the past six years.

“Nancy signed up for two years and was here for six,” Johnson said, adding he wished she could stay longer.

Johnson credited the district’s success, in part, to its small size.

“Students who start out in transitional kindergarten at View, have the same classmates at Hermosa Vista (third and fourth grades), and Hermosa Valley (fifth through eighth),” he said.

Hermosa students will soon be classmates from preschool through eighth grade, Bove-LaMonica said in announcing the district plans to start a preschool next year, she explained.

The district recently hosted a college sendoff for former Hermosa students who graduated this year from Redondo High and Mira Costa High.

“You could see the connections they made at our three schools were special,” Johnson said.

Following the presentation of colors Paul Carson and Brenden Joren, of Boy Scout Troop 860, a plaque was unveiled in memory of Eagle Scout Ian White, The former Hermosa schools student passed away in 2008 of bone cancer. The plaque will be installed on the Hermosa View Campus.