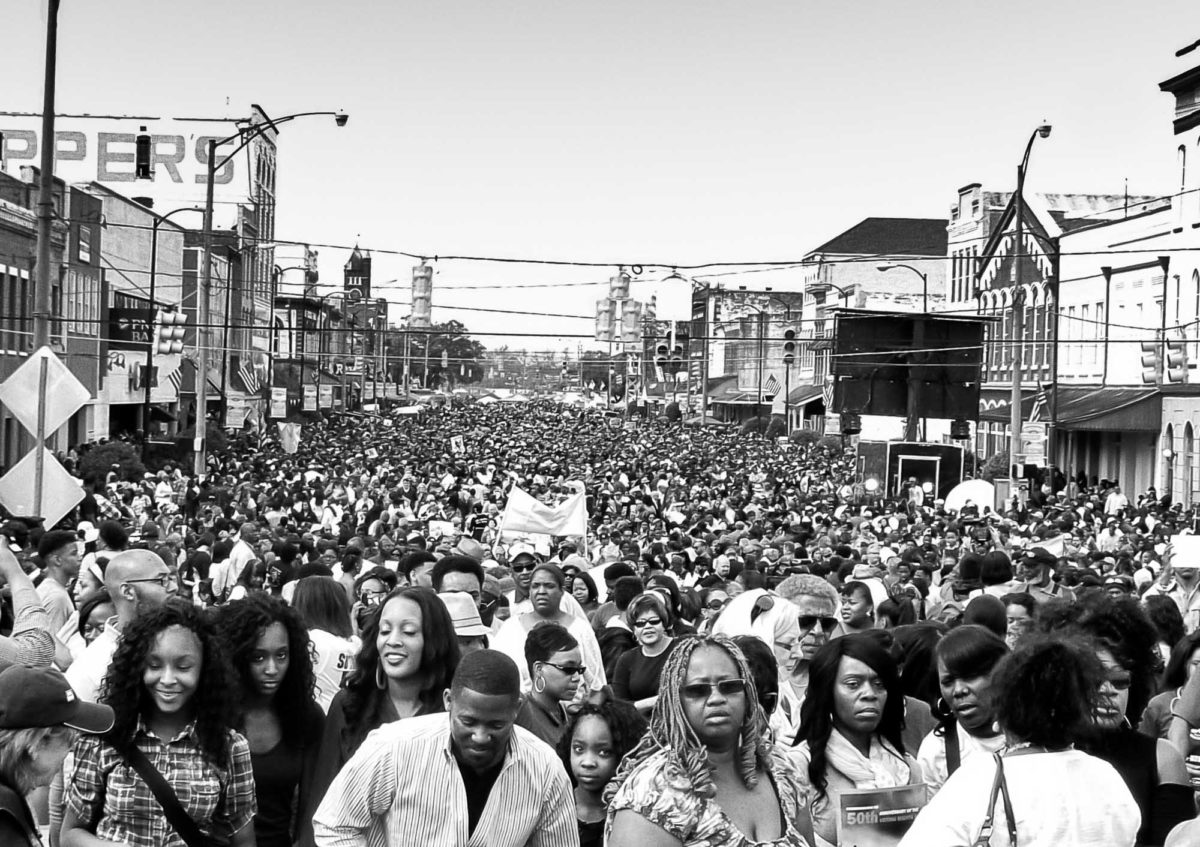 Stephanie Solomon wasn’t quite sure why she was in Selma, Ala. She just knew she had to be there.

Three years ago, the Hermosa Beach resident headed south for the 50th anniversary of “Bloody Sunday,” in which civil rights movement supporters, including future congressman John Lewis, were attacked while crossing the Edmund Pettus Bridge. The televised brutality shocked the nation and paved the way for the Voting Rights Act of 1965.

Solomon counted herself a lifelong supporter of the ideals behind the movement, but when she saw President Barack Obama marching across the bridge, she suddenly felt the need to document the moment.

“This muse came over me and I thought, “Oh my gosh, this is historic,’” Solomon recalled.

Now, Solomon’s photos of the commemoration will be put on display in “Footsoldiers for Justice,” a new exhibit at Antioch University in Culver City. The exhibit opens Oct. 4 and runs, as Solomon sought, through Election Day Nov. 6. Solomon, a regular presence at public meetings in Hermosa and elsewhere in the South Bay, describes herself as an “artist-activist,” who uses art, as playwright Bertolt Brecht said, not as a mirror to hold up to the world, but as a hammer with which to shape it.

Solomon was born in Brooklyn. Her family moved to southern Florida when she was young, to an area that once held almost all white tenant farmers, but which was transformed into housing for newly arriving workers. Many of these newcomers, like her mother, were Jews relocating from the Northeast, and they endured ridicule from their bosses, Solomon said.

At a time she moved there, Florida was heavily segregated. Black people were still unable to sit at the front of a bus, and there were separate, whites-only drinking fountains. Her mother, Solomon said, often spoke to them about justice and equality, lessons that stayed with Solomon for life. Being in Florida wasn’t all bad, though. She grew up near Miami Beach, where the Fontainebleau and other flashy hotels attracted top talent on the nightclub circuit. Thanks to a connection through her high school band, she got to go backstage for a performance by Ella Fitzgerald.

She won a scholarship to Boston University, became a singer herself, and got married to a teacher. She was living in Detroit when Martin Luther King, Jr. was killed in 1968, and could see snipers and tanks from a window in her apartment.

“It’s almost like in my life I’ve been placed in between segregation, and antisemitism…and ending up touring in Detroit during the riots, and anti-war demonstrations. I would have had to have been pretty blind not to ask questions about the nature of our democracy,” she said.

She was in Selma for Obama’s crossing, as well as a far larger one, with as many as 80,000 people, the next day. Her photos capture both ordinary people and leaders, including the Rev. William Barber, and the late Dick Gregory. Solomon had little formal training in photography, and described her tools as “a crappy camera and a crappy iPhone.” But the black and white photos earned her the 2016 Puffin Foundation Award for Photography, and have previously been displayed along the Selma to Montgomery National Historic Trail.

Although in a different medium, the activist spirit of the photos connects to Solomon’s earlier work, much of which has been in theater. Among her admirers is Dale Franzen, the founding director of the Broad Stage in Santa Monica. The two first collaborated in 2010 on “American Voices,” a production that reconsidered the writings of the Founding Fathers, and featured actor Dustin Hoffman and noted conductor Kent Nagano.

“At the heart of everything about Stephanie is a deep thinker and intellect. Her favorite thing is to go deeply in research history,” Franzen said. “She’s not a lightweight. She’s a very serious, brilliant woman, but she approaches things in an organic way, both deep and broad.”