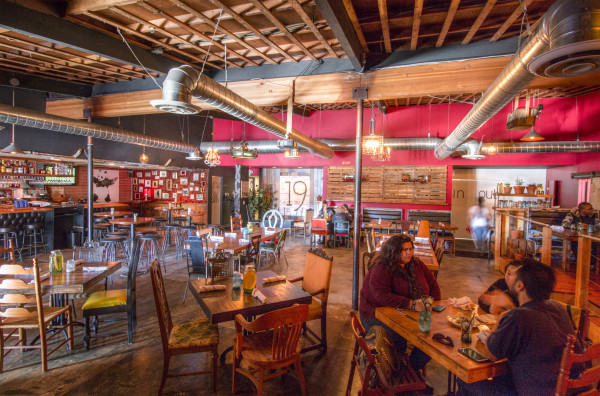 Hey 19, a hideway tucked into a mainly residential neighborhood in Torrance that has quickly become a popular destination. Photo by Brad Jacobson

There’s a subtle art to good smart pop songs, the ones that you find yourself singing along with and liking more each time you do. They have some musical or vocal hook, the thing that makes you listen to it in the first place, but sonic layers beneath – on the tenth listening you may focus on some drum stutter or bass riff that you haven’t heard before. And at the core of it all is a steady, unshakeable rhythm that keeps everything moving.

Great restaurants have the same immediately perceptible theme with subtleties beneath. As for rhythm, ask any server whether a place has its own beat, or just pay attention yourself. You may not notice the rhythm of a restaurant when it’s right, but when it’s wrong – when your dessert shows up before your main course, for instance – you sure do.

All this makes it appropriate that a dynamic new restaurant in Torrance is named after a Steely Dan tune from the 1980s. Hey 19 doesn’t celebrate that decade in its décor, soundtrack, or drinks – this is not an exercise in nostalgia. Instead the décor is eclectic, the menu whimsical in both design and content. It arrives in the kind of portfolio used for children’s homework, and the casual style leads you to expect bar food and burgers. The restaurant opened with a simple menu, but under new chef Vasili Tavernakis some more sophisticated items have been appearing. The zucchini fries, plain salad, and an impressive burger are still on the list, and you can get a retro item like a grilled cheese sandwich with tomato soup if that’s what you like. The cheese will be a blend, the soup homemade and tasty, but it’s recognizably the American classic. There are some unabashed novelties as well, such as the bacon-wrapped crackers – I’ve seen almost everything else wrapped with cured pork strips, so suppose I shouldn’t be surprised.

We decided to try “pigs in a blanket” instead. This is misnamed, as it’s not the breakfast sausage wrapped in a pancake, but a housemade English banger wrapped in puff pastry with mustard. In Britain these are called Toad in the Hole, and they’re a staple at renaissance fairs – they’re portable, cater to our love for lightly spiced pork, and go great with beer. The beer list is small but well chosen; you can get that microbrew, wine or cocktail from a menu adorned with a picture of Raquel Welch in a fur bikini. The cocktails here are first class – they make their own ginger ale, brandied cherries, and other ingredients, a rarity in this area.

They also pickle their own beets and radishes, used to good effect in the salad with shaved fennel, parmesan, and goat cheese, with the unlikely addition of pinenut brittle chips. The pickled, sweet, and nutty flavors are quite a combination, and I’d recommend this over the more conventional arrangements of greenery.

For main courses, the most popular here seems to be the “Meat Your Maker,” a gigantic pork chop topped with Maker’s Mark bourbon peach chutney. It’s a big, well-prepared piece of meat, and the collards and a sage and bacon sweet potato mash on the side add to the Southern regional flavor. I also liked their chicken and waffles, although I had been hesitant about ordering them since both maple and Cajun spices were mentioned on the menu. Maple is a popular flavoring but often overused, and with peppery spices in there too, I wondered if I’d be able to taste the chicken at all. These flavorings were used with delicacy, and it works well with the waffle and mix of collards and kale on the side. Among the other conventional dishes are a fine seared barramundi with caramelized shallot, beurre blanc, and sautéed spinach with mushrooms –tasty and well executed.

The weird items include something called a “Big Ben” – fried mac and cheese topped with a burger patty, bacon, a fried egg, and brown gravy with a touch of sambal and green onion. This sounds like something a college student would knock together and is tasty but ridiculously unhealthy – when I asked what goes well with it, my server suggested defibrillator paddles. It’s exactly the tasty, spicy carb bomb you’d expect, fun but not something I’d order regularly.

The standout items I’ve had included the recently added rack of lamb crusted with mint tea, served with crispy peewee potatoes, fig gravy, and watercress. I’m a big fan of lamb and this preparation is a prize winner – the rich meat, slightly bitter cress, and fig are great together. The potatoes are worthy of mention too – this chef has unusual skill with concentrating the flavor of root vegetables.

That flair also shows up in the short rib with fat thumbnail carrots and potatoes – as good as the slow-roasted meat is, those earthy, flavorful vegetables almost steal the show. The same was true with the pork osso bucco, delicious slow-roasted shank served with parsnips and braised persimmon, flavors from Colonial America. As modern as many items on the menu are, there is a common thread of respect for natural and traditional flavors running through everything.

The desserts are relatively straightforward, and the best I’ve had was Bourbon-soaked angel food cake flash fried, over ice cream. It’s a simple, sinful, way to end a very good meal.

Prices at Hey 19 are moderate, with only three entrees cracking the $20 mark. The place has become popular despite a location at the edge of a strip mall off the beaten track, or perhaps because of it – it’s a hideaway that is the obvious locals’ joint for this mainly residential district. It’s proof that a quirky concept, artistry, and a sense of fun can make something memorable, whether it be a restaurant or a song on the radio.