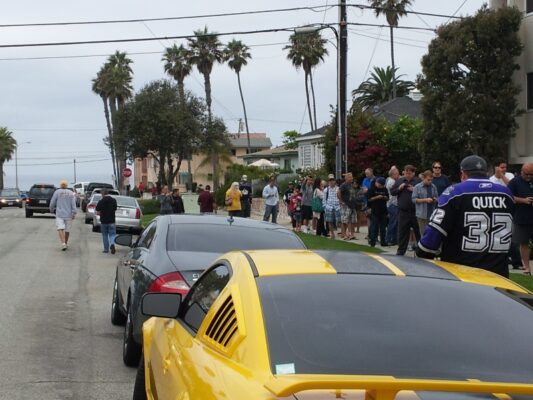 At least 200 people showed up to see the Stanley Cup at the Redondo Beach Cafe Wednesday morning. Photo by Dan Blomquist

Redondo Beach hockey fans were treated to a celebration 45 years in the making early Wednesday as the Stanley Cup was put on display in the parking lot of the Redondo Beach Café. The café, a popular hangout for the players in the past, opened their doors to throngs of locals who wanted to see the cup and celebrate the win with the team.

The queue to see the cup ran almost five blocks long, nearly reaching the beach. At least 200 people were lined up to get their picture taken with the Stanley Cup itself. The only requirement was that fans were asked to make a small donation to the Kings Care Foundation, a charity organization that provides at risk children educational opportunities. Fans assumed a variety of poses with the cup, ranging anywhere from hugging the cup, kissing the cup, straddling the cup, even placing their babies in the cup.

Other than the cup itself, several ex-Kings players were present to sign autographs and socialize with fans. Ex-Kings forward Nelson Emerson was one of the players there. Emerson played in the NHL for 14 years, from 1990 to 2002. He currently works for the Kings as a player development coach. 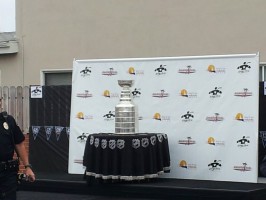 The Stanley Cup was placed on display in the parking lot of the Redondo Beach Cafe. Photo by Dan Blomquist

“This is a great place to live and play hockey…and you can’t put in to words what it means to win [the Stanley Cup] for the players and for the fans. The players were tremendous through the whole thing.” said Emerson.

“I’m extremely happy for the young guys [on the Kings]. It took 45 years, so it’s pretty exciting. I remember the elation in their eyes,” said Turnbull. “It was one of those moments where, as a team, everyone was on the same page all the time, special things happen. They were very excited about it.”

The cup was escorted to the restaurant by official Kings analysts Jim Fox and Daryl Evans, who talked about how the Kings pulled together to pull-off their Stanley Cup win.

“This team has been in the building process for five years,” said Fox. “They did the right thing to strip it down and build it up the right way. I would say that two things that came together was acquiring Mike Richards last summer. The Kings didn’t really have a player with intensity, and I don’t think anyone realized the intensity that Mike had, and I think Mike showed the way for a lot of Kings players. There was a trade with Jeff Carter coming across, which changed the total dynamic of the team. The foundation was there too…that young core was a huge part of it.” ER