Hooking up with take-out [restaurant review]

Food to go from Hook & Plow in Redondo may give home cooks fresh ideas, or encourage more take-out 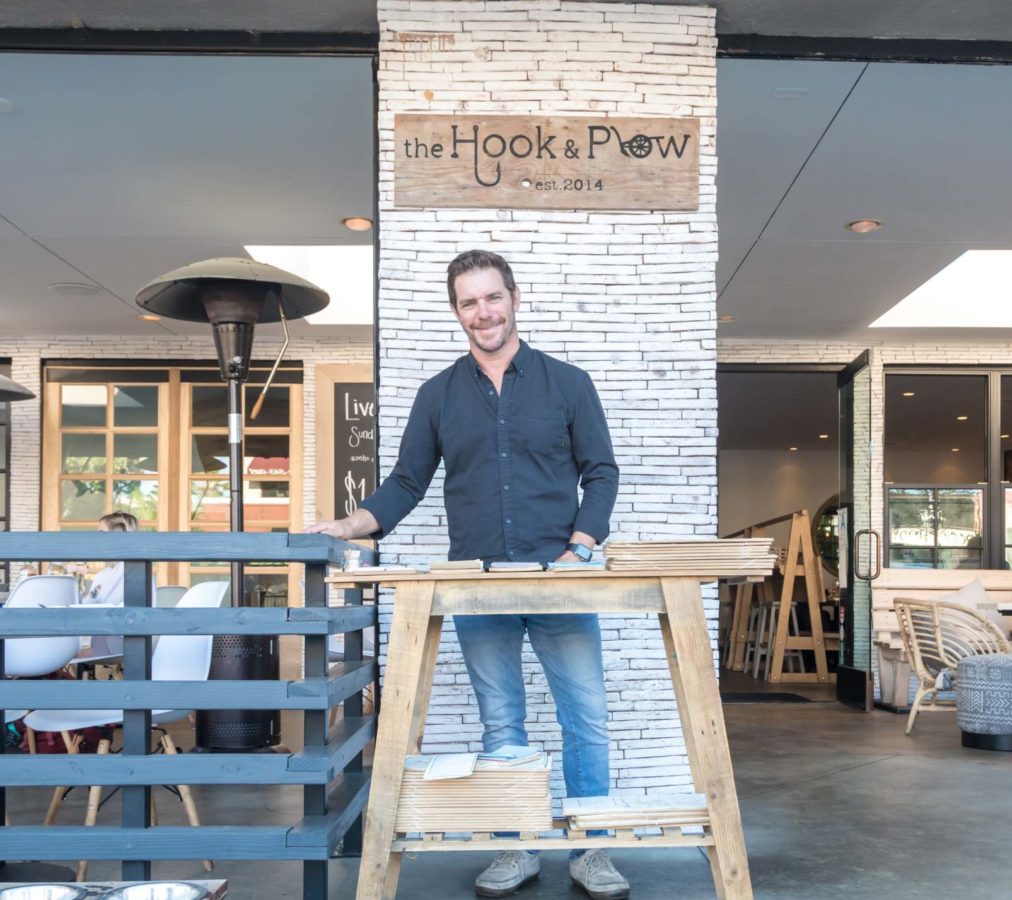 Hook & Plow owner Brian Kelleher at the host station, which is now the take-out station. Photo by JP Cordero

The stay-at-home order has had an interesting side effect, as amateur cooks who suddenly have free time are upping their game in the kitchen. Old family recipes from an era when women stayed at home and cooked all day seemed too complex and time consuming only a month ago. Now that we’re staying home and telecommuting, it’s a welcome break when the alarm goes off to tell us that it’s time to add the mushrooms to that pot of stew or punch down that loaf of bread that has been rising in a warm spot in the kitchen.
I know this is happening because so many of my friends have decided to get good at baking that two different people dropped off loaves of sourdough yesterday. We had slices of both with a Greek stew that I simmered all day, and they were delicious.
Even so, no matter how good you are at cooking, it’s nice to take a little time off and enjoy somebody else’s sense of how flavors combine. That professional kitchen probably has some things in stock that you can’t get or wouldn’t think to order, and after you try their take-out you can return to your kitchen with a new sense of purpose. A likely destination might be the Hook & Plow in Riviera Village, which offers a variety of items that you’re not too likely to execute at home.
Since you’re getting this as takeout, the usual distinction between appetizers and main courses has vanished. Unless you make two trips within an hour to pick up each course, this is not going to resemble a typical meal there. It is however worthwhile to get a mix of small and large plates just so you can savor a greater variety than you’ve probably been getting lately.
The small plates include coconut shrimp tempura, deep fried avocado slices, or seared scallops with Calabrian chili, roasted garlic, and scallions. Unless you live very close to the restaurant, save the avocado for the day when the dining room is open again, because they lose their crispness so quickly. The alternative is opening the bag as soon as you get back in your car and devouring them right there, which has the advantage of instant gratification but will shortchange anyone waiting at home.
The house fries will stay good longer, and are better than anything you’ll make at home unless you season yours with Japanese seaweed, truffle oil, and Grana Padano cheese and serve them with housemade ketchup and whole grain mustard aioli. If you have a long drive, then you might opt for Hook & Plow’s very well-made clam chowder, which has just the right dash of pepper and a little bacony smokiness.
There are only two salads on the regular menu, but both are intriguing. The pear and burrata cheese with arugula, gooseberry marmalade, granola, and truffle oil sounds great, and it’s on my must-try list. I have had the baby black kale and quinoa with avocado, sunflower seeds, cranberries, tomatoes, and cheese, which was a remarkably stylish upscale version of old school hippie health food flavors. The portion was substantial enough that this could easily be an entrée for vegetarians, who have surprisingly few other choices on this menu.
Among the main courses, I’ve tried the brick chicken, pork chop, their burger, and a daily special of roasted halibut. The fish was probably the most impressive item, not only because it was perfectly cooked, but because it came with an intriguing variety of accompaniments. It was served over Rancho Gordo heirloom beans (which have a deeper, richer flavor than commodity beans), with a vegetable mix that included mustard greens, purple cauliflower, sliced radishes, micro-greens, and parsnip chips. There were many different flavors and textures, all harmonious, and it was a beautiful presentation as well. The fresh fish offering changes regularly, but whatever you get is going to be fantastic when prepared this way, this well. 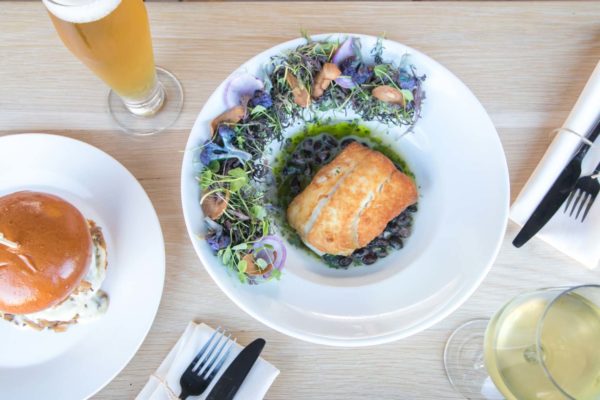 Hook & Plow’s roasted halibut on a bed of Rancho Gordo heirloom beans and other vegetables makes a beautiful presentation, even in a takeout box. Photo by JP Cordero

The pork chop was very good too, though I found the barbecue sauce that was served with it to be overly sweet. I strongly suggest that you get this on the side and just enjoy the flavor of high-quality meat well grilled over cheese grits with brussels sprouts. There’s nothing wildly inventive here, but it’s classic cooking very well done. The half brick chicken with sautéed spinach, dried cranberries, and sourdough bread would have been its equal if it hadn’t been swamped in leek-cream sauce. That sauce in more moderate amounts over some noodles would’ve been great, but the balance of the dish as served was off. Ask for only a moderate amount, or for it to be on the side.
If comfort food like a great American burger is more your speed, theirs is very good but rather messy thanks to exuberant amounts of Crescenza cheese and roasted garlic aioli. If you like your burgers to be a very tasty mess, this could be your favorite, but if I ordered it again, I would ask them to back off on the aioli. The burger was served with a house salad of varied lettuces in a light, fresh, dressing with some cornichon pickles on the side, and it’s worth the $16 that they charge for it.
Hook & Plow also offers cheddar and scallion biscuits with blueberry-lime jam, which we found tasty but not essential. While these were listed as a side, they would’ve worked as well as a dessert, if we hadn’t already gotten their rather eccentric version of a blueberry pie. This is really a blueberry panna cotta in a graham cracker crust with some locally made coconut ice cream on the side. There were a scattering of actual blueberries on the plate, but they had been glazed with honey and topped with toasted coconut. I found the honey glaze to be unnecessary, but it was an interesting experience that confounded our expectations, and certainly worth trying.
Dinner from the Hook & Plow is a mild extravagance compared to eating at home, but the experience is great for morale. It’s a reminder that while the streets are quiet and most workplaces shuttered, some people are still working to make very good food, and they’ll welcome us all to dine in when it’s all over.