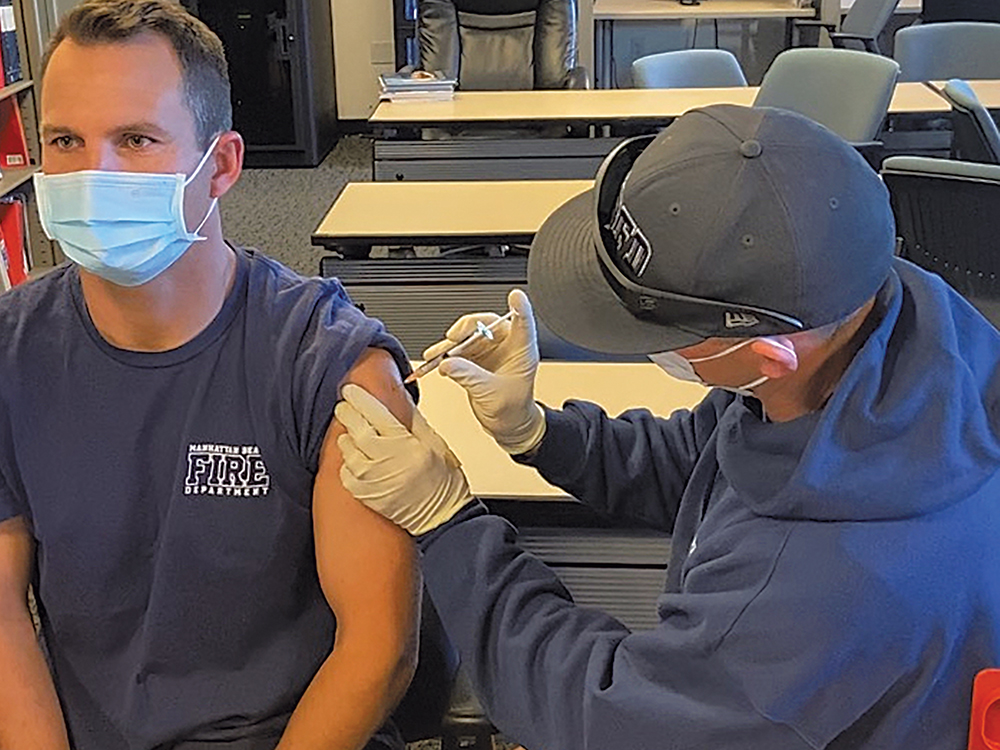 Manhattan Beach’s bid to host a vaccine site, which appeared on the cusp of occurring in late January, has run into a problem. County officials informed the city on Monday that not enough vaccines are available.

Councilperson Richard Montgomery, who as mayor last year helped obtain approval for the city to host a Medical Point of Dispensing, or MPOD vaccine site, made the announcement at Tuesday’s council meeting.

“They ran out of vaccines,” Montgomery said. “It’s not because we didn’t all work to make that happen…. It was the state that pulled back on the vaccine supply. We are still involved, so we are high on the priority list.”

Governor Gavin Newsom last week announced a new, more centralized manner of delivering vaccines after the somewhat chaotic early rollout of vaccinations resulted in a statewide bottleneck. By January 26, only 2.6 million of the 4.7 million doses shipped to the state by the federal government were administered since the process began in mid-December. According to the Center for Disease Control’s vaccine dashboard, through Monday California had administered 8,969 doses for every 100,000 residents, which ranked 15th lowest among the 50 states.

The state has made two overarching changes to the way vaccines will be delivered. Newsom announced last week that the state would take an age-based approach, prioritizing those 65 and over in addition to certain employment sectors.

“We believe that the cohort 65 and over needs to be prioritized alongside health care workers, first responders, food and agricultural workers and school staff and teachers,” Newsom said at a press conference announcing the change.

A little more than 6 million Californians are over 65, and one in four of those seniors live in LA County. State epidemiologist Dr. Erica Pan last week said that the state is receiving 400,000 to 500,000 new vaccine doses per week from the federal government, and estimated that at this rate it would take 20 to 22 weeks —  until late summer —  just to vaccinate all Californians over age 65.

The other significant change is the Governor’s plan to streamline distribution by tasking Blue Shield of California with allocation of vaccines.

“We are waiting for further state guidance on that,” Moe said. “They’ve enlisted the help of a third party administrator, namely Blue Shield of California, to help with creating a network of approved healthcare providers to manage the vaccinations across the state…. The Beach Cities Health District continues to work on what they can do, working closely with the county, so hopefully within the next week or so we’ll have some additional information here. But Richard is correct that basically the county has told all MPODs you’re on hold until we contact you.”

Montgomery had worked since last March to obtain an MPOD that would specifically deliver vaccines to Manhattan Beach residents. He’d attended a National League of Cities conference at the White House in the very early days of the pandemic, and learned that MPODs were part of the federal Operation Warp Speed vaccination plan. Montgomery brought back the information to his council colleagues, the police and fire departments, and city staff. The city assembled a team of 50 volunteer doctors and nurses to administer shots, formed a partnership with BCHD to help organize the site at AdventurePlex on Marine Avenue, and obtained approval from the Los Angeles Department of Public Health for what would have been the South Bay’s only MPOD.

“We did everything right,” Montgomery said. “We had it lined it up. We even had a walk-though, looking at outside parking and then tents on the grass …. We had a perfect plan that was approved by BCHD and approved by the Department of Public Health.”

The city’s MPOD was approved for up to 14,000 shots. Montgomery’s hope would have been to vaccinate all Manhattan Beach residents 65 and over first, then all teachers and any first responders who hadn’t already received shots, and then open it up to other city residents, particularly those with underlying health conditions.

“I wanted to keep the shots in our city,” Montgomery said.

BCHD CEO Tom Bakaly appeared at City Council January 19 to announce that the MPOD would likely be operational within the next 10 to 14 days. But then, after the state reorganized its approach, Montgomery received a call from a county health official informing him all MPODs were “on pause.”

“I’m extremely frustrated that we did everything right, everything by the book to make this happen, and they pulled the rug out from under us,” Montgomery said.

He largely blames the federal government for the vaccine shortage and for not following through on its promises. He is concerned that older local residents will be forced to drive to the large LA County vaccination sites, Dodger Stadium and the Forum.

“They are going to make my residents drive to the Forum [for vaccines],” Montgomery said. “Until we get more vaccines from the feds, we are all shorted. But we are the most populous county; we need that vaccine to knock our numbers down. Send us the biggest share then let us do our jobs.”

California Secretary of Health Mark Ghaly gave an upbeat assessment at a press conference Monday in which he unveiled the “Vaccinate all 58” campaign aimed at reaching all the counties in the state as quickly and equitably as possible. Ghaly said that the state has steadily increased the pace of vaccination distribution; through Monday, 3.6 million of the state’s 39.5 million residents had been vaccinated, a big uptick in the last week. Ghaly said that the constraining factor will no longer be the distribution system, but the nationwide shortage of vaccines.

“As we’ve said before, the only rate-limiting step to vaccinating California should be the availability of the vaccine itself,” Ghaly said. “We continue to work with the federal administration and the [vaccine] manufacturers directly to understand what can be done to get more supply to California.”

As part of the state’s new approach, residents are asked to register for a vaccination date at MyTurn.Ca.Gov. To register with LA County, go to VaccinateLACountycom. ER