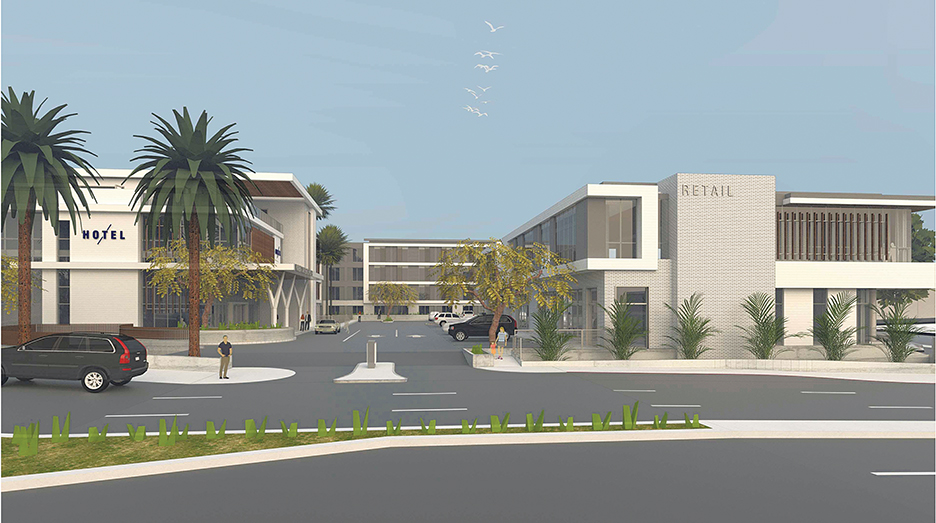 The hotel proposed at 600 S. Sepulveda in Manhattan Beach. Rendering by AXIS/GFA

The hotel proposed at 600 S. Sepulveda in Manhattan Beach. Rendering by AXIS/GFA

A 162-room, four-story 81,775 square foot hotel intended to attract business travelers from LAX has been proposed for the site formerly occupied by the El Torito restaurant, on Sepulveda Boulevard in Manhattan Beach.

The proposed hotel was approved by the Planning Commission in November, but faces opposition both from a neighborhood group and a hospitality workers union, both of whom appealed the commission’s decision to the City Council. That appeal arrived at Council Tuesday night.

The man behind the project, Jan Holtze, a Manhattan Beach resident, engineer, developer, and founder of Live Oak Properties, acknowledged the opposition the hotel faces at the outset of his remarks to Council.

“Quickly, I’d like to describe what our hotel is not,” Holtze said. “I’d like to dispel the myths and the gross misrepresentations put forth over the last two months. First, our building is not a 200-foot tall building, as was posted initially on NextDoor on October 5. We are not exempt from [California Environmental Quality Act] review. To the contrary, we conducted a full analysis for traffic air quality noise and hydrology, which demonstrated no significant impacts, not even close. Thus, further analyses are unwarranted. Our building is not the misleadingly depicted building on a flyer that was circulated this weekend around to the neighbors, nor is the fourth floor terrace 200 feet long, nor does it allow occupancy of 200 people. There is no bar on the roof of the hotel, I repeat, there is no rooftop bar.”

Holtze said that, also contrary to information disseminated in the campaign against it, the hotel will not be a convention center, not attract neighborhood parking, not have a restaurant open to the public, will not be loud, and will not have big traffic impacts.

“Here’s what we are: we are a very well designed, mixed-use project that actually reduces the traffic impacts by at least 20 percent, compared to a project where we developed solely as a hotel, and more than 35 percent if compared to alternative development opportunities, like an office building,” Holtze said. “We will be a limited service, select service premium class three-and-a-half star business hotel affiliated with one of the major franchises.”

Both Holtze and project’s financial analyst, local resident Larry Kosmont, emphasized that the hotel will produce $1.3 million annually for the city in sales and hotel tax revenue when completed in 2023. Kosmont said that this is the exact amount of revenue the city is losing in just those taxes due to the pandemic in its next budget, and argued that the project is precisely what the City Council expressed hope for when it approved a new Sepulveda Boulevard plan in 2019.

“The timing for this application is very unique. We sit here at the crossroads of economic dislocation. You’ve heard tonight from literally a multitude of folks,” Kosmont said, referencing earlier testimony from struggling restaurateurs. “Our local venues, our restaurants, are all suffering. This select service hotel will bring thousands of patrons to the community.”

MB Poets is a non-profit formed by about 30 families who live nearest the proposed hotel. The group, named after the neighborhood’s poet-named streets, filed a lawsuit against the project, arguing the project should not be exempt from a full review under the California Environmental Quality Act (CEQA). They argue that the hotel violates city and state law, regarding parking, traffic and noise impacts. One of its leaders, Daryl Franklin, told the Council that neighbors would support “appropriately reasonable and responsible development,” but that this project is neither.

“This development is the first under the city’s new four story building exemption unique to hotels,” Franklin said. “What is proposed is huge for the size of the site, at the very limits of permitted density on a site hemmed in by Sepulveda on one side and family residences 20 yards from the hotel on the other. The site is also located adjacent to the corner of Keats and Sepulveda, where Amory Borgens lost her life, and on the other corner at Tennyson and Sepulveda, where Michael Cameron King lost his life, both in road traffic accidents in the last few years. The City Council owes it to their families and all the families in our city to make sure that the adverse impacts of this development are properly analyzed and minimized. A full EIR is required to do that.”

The developers were granted a Notice of Exemption from a full Environmental Impact Report — a costly and time-intensive process — directly after the project’s approval at the Planning Commission on November 18. Associate planner Ted Faturos told the council the the project met all the requirements for an exemption —  that it was consistent with the General Plan and zoning code, was less than 5 acres, was located on a site that wasn’t habitat to any endangered species, and would not result in significant traffic, noise, air or water quality impacts.

According to MB Poets, the developers registered the exemption by the following morning, which under state law started a countdown which gave those against the project 35 days to file a lawsuit. Franklin said MB Poets had little choice but to sue and suggested the fact the City knew an appeal was coming might make the Notice of Exemption legally vulnerable.

“The issuance of the NOE within hours of a hotly contested hearing was unusual and may be grounds to have the NOE set aside as having been improperly issued prior to exhaustion of the administrative time periods associated with the City hearing process,” he said via email, noting that other recent, nearby developments both submitted full EIRs. “Environmental review is an early and important step in any major development —  both Skechers developments and Gelsons had them —  and it isn’t clear why the City is striving so hard to avoid one here, especially when there are serious issues with what is proposed that will have long lasting adverse impact on the immediate neighborhood as well as the already heavily impacted Sepulveda traffic corridor.”

The other appellant, Unite Here Local 11, argued that the project failed both environmentally and in terms of social justice.

“We represent 30,000, dishwashers, housekeepers, servers and bellmen in the hospitality industry,” said Danielle Wilson, representing United Here Local 11. “Our industry is shuttered. Our members are the working poor. They live near the port, along impacted freeway corridors, and next industrial areas. They are the canaries in the coal mine for climate change. When we see a project like this, that our experts have determined will have significant greenhouse gas emissions and have negative impacts on air quality —  we have to ask public servants like yourselves to push for the highest possible environmental standards. Here we are looking at a project that has been incorrectly deemed exempt from CEQA, not even the lowest tier of environmental review. And we see that a project will do nothing to keep working families from getting pushed further and further away from their jobs in the South Bay. We need to ask for more.”

The public hearing, conducted by Zoom, was unusually well attended, with 130 people still tuned in during the hotel discussion, which was after 11 p.m. Mayor Suzanne Hadley suggested continuing the meeting until February 2, to give residents ample time to testify.

“It does seem like a good idea [so] we won’t be going into the wee hours of the night,” Hadley said. “We want to give everyone their full time…. there’s quite a bit more to this process.”

The Council unanimously moved to continue the matter on February 2. ER