“How They Got Over: Gospel Quartets and the Road to Rock & Roll” – Not a lot of rock but plenty of roll [MOVIE REVIEW] 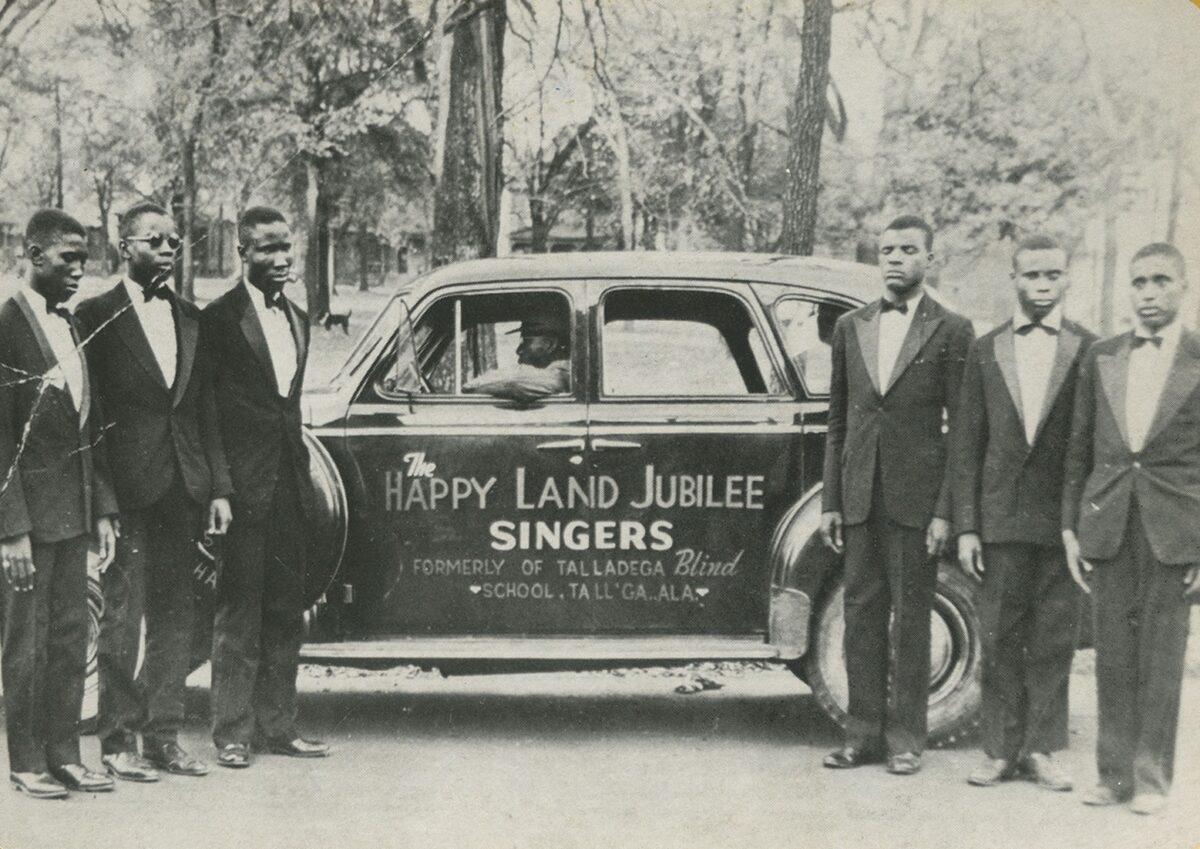 The future Blind Boys of Alabama as seen in "How They Got Over." Photo courtesy of First Run Features.

Robert Clem, director, producer, editor, and photographer in his feature documentary directorial debut has set a high bar for himself. Purporting to show how black gospel quartets of the 30s, 40s, and 50s ushered in the birth of rock and roll, it does no such thing. Lacking an instructive narrative, he makes no viable case for that presumption even though most of us know that it is true just by knowing the gospel histories of Big Joe Turner, Big Mama Thornton, Little Richard, and Elvis Presley, to name a few.  He just didn’t connect the dots in a cohesive manner. Now that some of the criticism is out of the way, let’s give thanks that we have a chance to enjoy all the fabulous, and they are absolutely fabulous, historic film clips of the pioneers of commercial gospel music.

Following the birth of the so-called gospel quartet, Clem traces a path from its spiritual origin in the African American church to its eventual commercial and secular success. Interviews with still living musicians who participated in this artform and clips of their groups performing is worthy of foot-stomping and hand-clapping. As explained by Ira Tucker of the Dixie Hummingbirds, one of the major groups achieving widespread fame in the 30s and 40s, there weren’t a lot of options for Black men in the South. There was work in the fields, some athletic endeavors like boxing (keep in mind that professional basketball, football, and baseball were all segregated), and music. Musical groups, originally quartets, could perform on a church circuit where they could expect to be fed and housed, but little else. Still it was better than the alternatives.

Clem never explains why these groups were called quartets because their numbers usually far-exceeded four. Still, it was a musical form that thrived in the African American community and eventually some of the more famous groups like the Dixie Hummingbirds and the Fairfield Four traveled a circuit of churches and theaters, eventually receiving record contracts and invitations to appear on the radio. 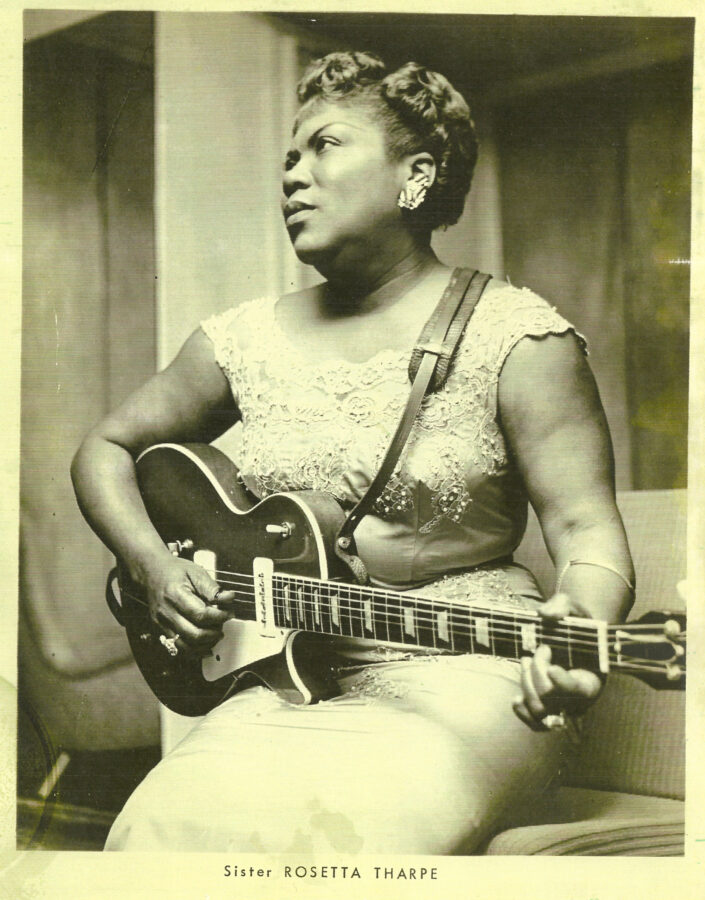 Sister Rosetta Tharpe and her electric guitar as seen in “How They Got Over.” Photo courtesy of First Run Features.

Not all the groups were men. There were some very important women involved in the movement, although rarely under the title of “quartet.” Film footage of the Davis Sisters, the Gospel Harmonettes with Evelyn Hardy’s piano stylings that are similar to those of Jerry Lee Lewis, Inez Andrews and the Andrewettes, and most especially the charismatic Sister Rosetta Tharpe who had her own show and would invite some of the other groups to appear.

Originally the groups performed acapella or to the accompaniment of an organ when in church, but they began to see the need for instrumentation to distinguish them from their many competitors. The guitar was introduced and other instruments soon followed.

Perhaps the most influential musician in the gospel movement was Sister Rosetta Tharp who introduced the electric guitar and its musical inventions into her performances, a style that was notably influential on some of great guitarists to come like Chuck Berry, Eric Clapton, and Keith Richards. “How They Got Over” includes fantastic footage of Sister Rosetta’s performances, solo and with others, and highlights her idiosyncratic style that created quite a stir. What a shame that Clem neglects to mention her importance in Little Richard’s career or that many consider her song “Strange Things Happening Every Day” as the first rock and roll record. Little Richard has stated that she was his favorite performer and that his first public performance outside of church was at one of her concerts at her invitation. He was in good company because Johnny Cash considered her his favorite singer as a child. Aretha Franklin, Jerry Lee Lewis, and Tina Turner cited her as an important influence on their work. But you won’t find this out in the documentary, you’ll have to go online for this information.

Clarence Fountain of the Blind Boys of Alabama discusses how he and his friends formed a group with the specific intention of escaping the abusive atmosphere at the Alabama Institute for the Negro Deaf and Blind. They found some of their first success performing for army recruits during World War II. They began their professional career as the Happy Land Jubilee Singers often on the same bill as another blind group called the Jackson Harmoneers. The two groups changed their names and would go on to perform, often on the same bill, as “The Blind Boys of Alabama” and “The Blind Boys of Mississippi.” They sang what was called “hard gospel” that added a shrieking style to their singing. 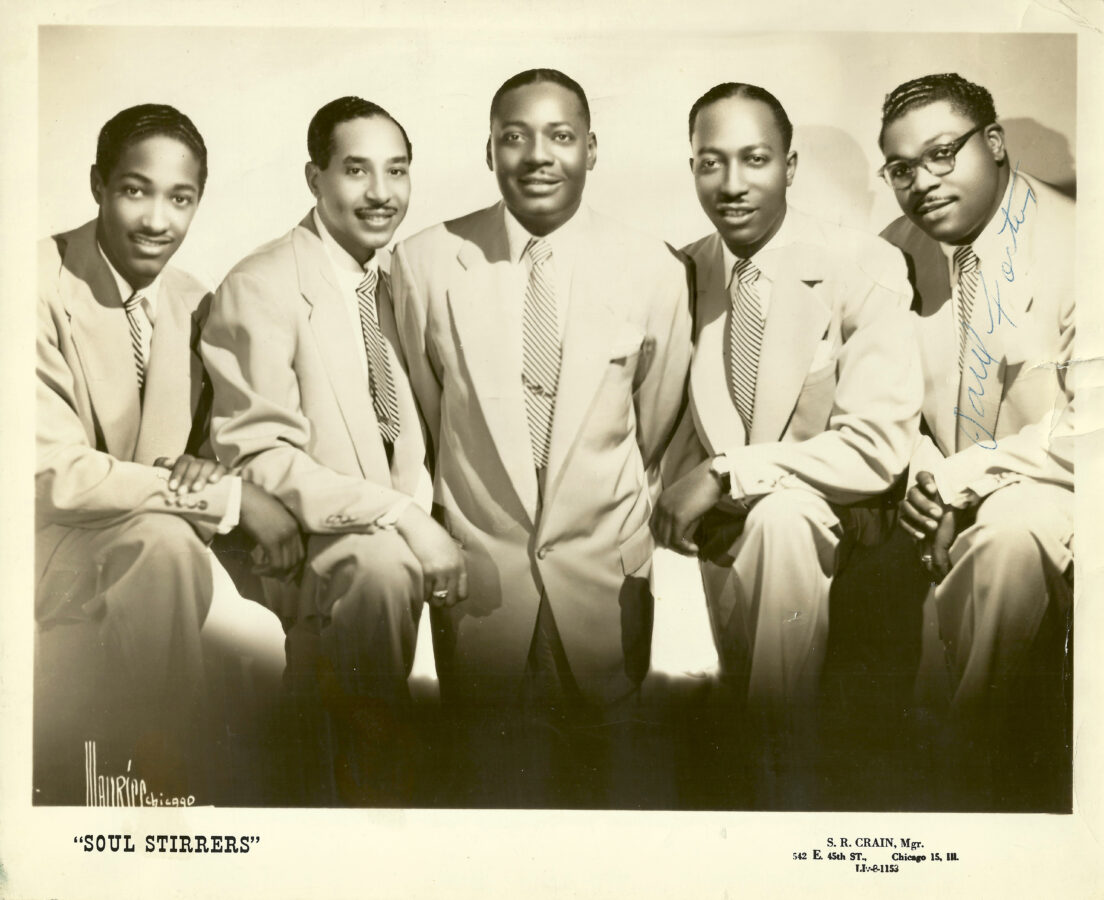 Sam Cooke (right) with the Soul Stirrers in “How They Got Over.” Photo courtesy of First Run Features.

Clem misses opportunity after opportunity to tie the gospel music to rock and roll, including the influence of hard gospel on singers like Big Joe Turner. When he does make that connection, it isn’t to rock and roll but to pop music. One of the most famous graduates of the gospel movement was Sam Cooke, a prominent member of the Soul Stirrers. Handsome, with a smooth tenor, a talent for writing, and a gift for soulfully presenting lyrics, Cooke was one of the first to be offered a contract as a pop singer. As he pointed out to his fellow musicians, there was money, lots of it, to be made on “the other side.” Most didn’t take his advice preferring to remain in a more spiritual field. Perhaps they were jealous; perhaps they just couldn’t see far enough down the road; or maybe they were committed to the spiritual aspect of gospel. But Cooke made his name and his fortune by popularizing the music that was so dear to his heart. Listen to “A Change is Gonna Come” and you hear pure gospel. He was soon joined on the other side by Aretha Franklin, who toured the gospel circuit with her father, with Lou Rawls, and with Dennis Edwards who started with The Mighty Clouds of Joy before joining The Temptations. But this also points out a major problem with Clem’s premise that gospel ushered in rock and roll. Yes, the style of Big Mama Thornton is straight out of the hard gospel sound of Inez Andrews or Sister Rosetta Sharp, but it is a presumption based on nothing more than a snippet of Thornton singing “Hound Dog” from a record. And the rest of them? Unlike Little Richard, these artists were part of the “soul” revolution, not rock and roll per se.

Despite all of the thematic failings, this movie is a marvelous opportunity to see archival footage and listen to the stylings of early and later day masters of the genre. Missing, however, is the greatest of them all—Mahalia Jackson. Seen briefly in a photo, there is virtually no mention of her or her influence on the music. She was, without a doubt, the most popular gospel singer of her generation if not of all time. Perhaps Clem couldn’t afford the license fees for her music but that does not forgive the oversight of telling her story and mentioning her influence.

As to the claim that these groups broke down racial walls in the mid-twentieth century, hogwash. The groups highlighted in this documentary were at best tangential. Most of their music stayed within the African American community. Even Sam Cooke’s sound didn’t reach beyond racial borders until he became a pop singer. The major exception is Mahalia Jackson who had the number 2 song on the Billboard chart in 1947 and remained true to gospel music throughout her life.

What all of these singers and groups had in common was the racial discrimination they faced throughout their lives. Touring in the South, even in the early 70s, brought fear into their very souls as they might be arrested by policemen intent on stopping them from entering a town, or by restaurant staff who wouldn’t serve them. But travel under those circumstances was unavoidable because the bulk of their audience still lived in the South. It’s not that they didn’t face difficult circumstances in the North, but usually those situations didn’t come with the fear of death.

My feelings are decidedly mixed. I reveled in the music and the opportunity to hear first-hand accounts of the artists who remained. Gospel continues to be an important force in churches today. Had Clem decided just to make a documentary on gospel music and used some carefully constructed illustration to point out its influence on the popular music that swam in its wake, he’d have had an interesting, informative, and unique documentary. Tying gospel to rock and roll, or soul, or pop, is not an over-reach but it deserves the explanation and illustration necessary to make that connection. But in the end, it’s the music, baby, it’s the music.

Opening Friday October 29 at the Laemmle Royal and in Virtual Cinemas.