“How to Please a Woman” – Cleanliness close to sexiness [MOVIE REVIEW] 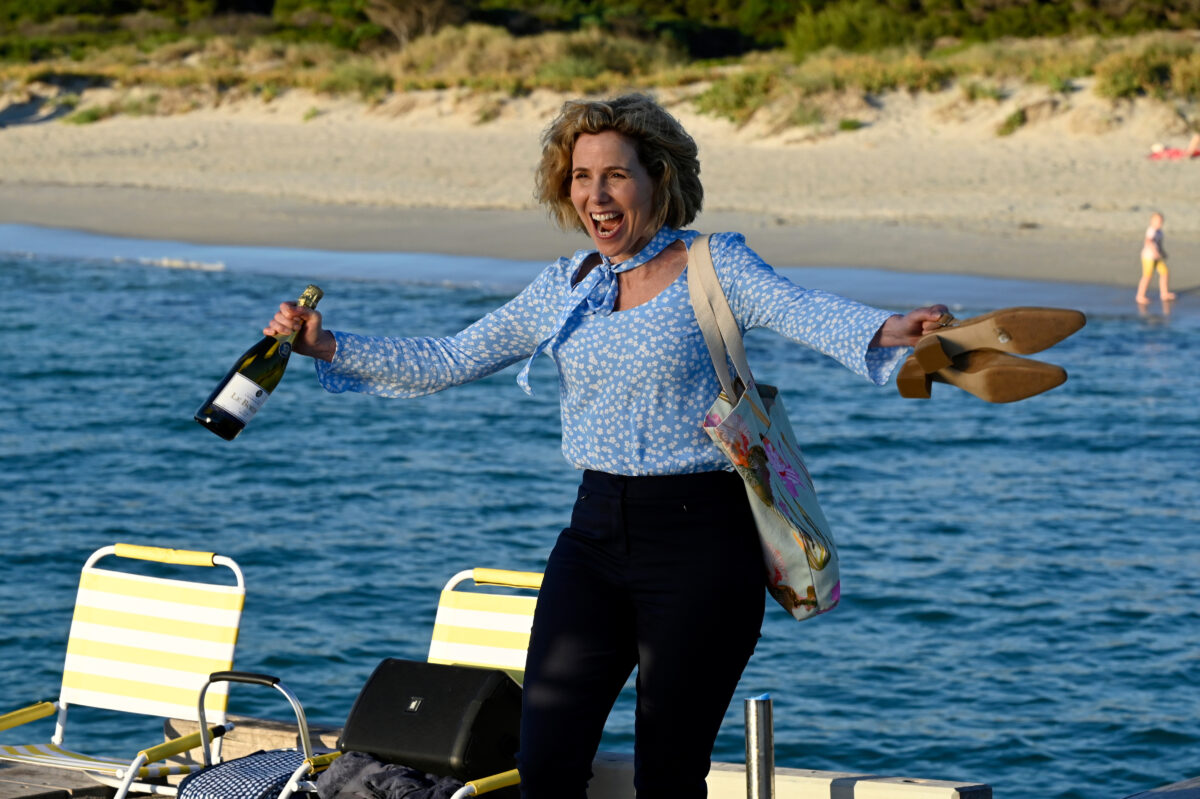 Sally Phillips as Gina in "How To Please A Woman." Photo courtesy of David Dare Parker.

“How to Please a Woman,” the amusing feature writing and directing debut of Renée Webster, a seasoned television director, is not as complicated as might be presumed. Listen, just listen.

Beginning the day as she always does with a swim in the sea with her close-knit group of girlfriends, Gina is greeted with a chorus of Happy Birthdays followed by hidden knowing winks among the friends. Having just turned 50, she’s not looking forward to the day. Returning home in time to see her husband Adrian before he leaves for the office, he gives her a peck on the cheek and a card with some cash. She heads off as well.

Gina is middle management in a liquidations company, assessing the survival chances of businesses on the verge of bankruptcy. Her boss thinks that saving a company is a lot less fruitful and a lot more work than just stripping them of assets and moving on. Although this is just a half day for her, he asks her to go pick up some paperwork he left at a company they are about to foreclose on. Eating into her time off, she reluctantly trudges off to the removals company, “Pleased to Move you,”  to retrieve the files from Steve, the owner. It’s a poorly managed business but in scanning their spreadsheet, she realizes that it’s salvageable. Returning to the office, she tells her boss that they shouldn’t liquidate. Not only does he override her decision but he fires her in what he calls an office reorganization. As she is the only person released and is one of the most productive members of the office, albeit the oldest, she recognizes the move for what it is, especially when the latest hire, a young, buxom blonde, enters his office with something he requested. 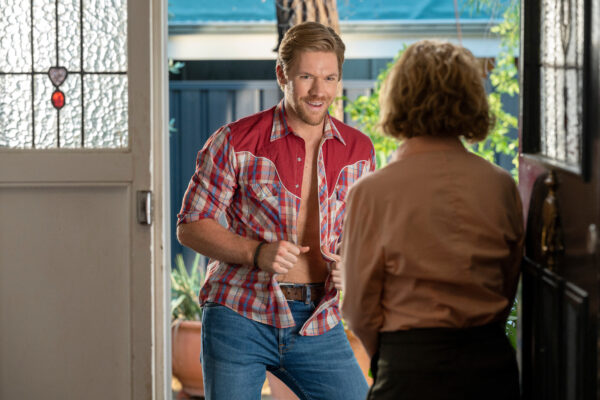 Alex England as Tom and Sally Phillips as Gina in “How To Please A Woman.” Photo courtesy of David Dare Parker.

Returning to an empty house, she is surprised when the doorbell rings and a hunky young man begins his birthday striptease for her. Her swim friends have hired him and, as he emphasizes, he will do whatever she wants for the next two hours (wink, wink). And what does she really really want? She wants him to do what no man has ever done for her before. She wants him to clean the house.

Returning the next day to her swim circle, they all want to know how she liked her gift. He cleaned for her? Shirtless? Not exactly what they had in mind but somehow the idea of it is sexy enough that they are agog. Gina, now unemployed, returns to the removal company and explains to Steve, the owner, that although the liquidations company wants to take them down, she feels that they have the possibility of surviving if they can find some other revenue to tide them over. Just at that moment, Tom, the young man who entertained her for her birthday arrives. He just lost his side gig as a stripper because the company was unhappy with his work. You can see the light bulb go off in Gina’s head. Additional source of revenue discovered and a new business model is created. “Pleased to Move You” takes on a new meaning as Tom and his two coworkers, Anthony and Ben, are schooled in the proper techniques of training. When Tom offers more complete services, they morph further and the boys expand their horizons with the help of the women who are looking for more personal pleasure. 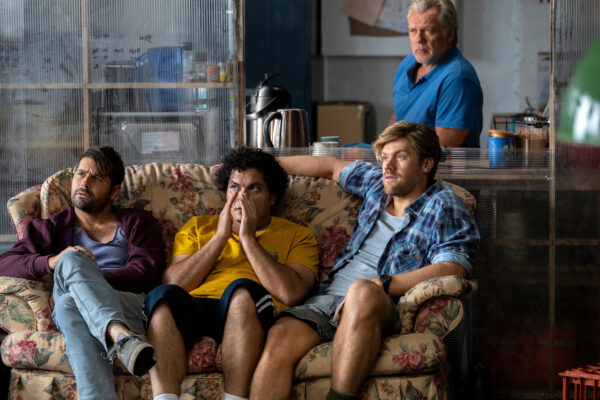 Ryan Johnson as Anthony, Josh Thomson as Ben, Alex England as Tom, and Erik Thomson as Steve in “How To Please A Woman.” Photo courtesy of David Dare Parker.

Complications ensue, not the least of which are Gina’s own passionless marriage, and a lack of business license covering her new business model, but all’s well that ends well and this small town in Western Australia has a whole lot more satisfied women than before.

Don’t go looking for deeper meaning. Crisply directed, it’s a cute film that doesn’t go much beyond what can be seen on a TV sitcom. There’s conflict, resolution, humor, sex, pathos, and some great bodies. Everyone learns something, with the exception of Gina’s husband and clueless former boss. Any opportunity to dig deep into character is ignored.  A significant miss is the relationship between Gina and her husband, because as much as she would like to be listened to and looked at by him, he is actually begging for the same from her. Characters are written superficially and plot points are obvious. Nevertheless, this is a fun ride and is to be enjoyed, not dissected or given great thought.

The cast is quite good, leading off with Sally Phillips as Gina. Phillips is a seasoned and highly regarded comedienne. Her hilarious antagonist in the British sitcom “Miranda” is a tribute to how subtly an over-the-top character can be played. She was also in all the “Bridget Jones” movies. Sadly, Webster has saddled her with a morose character, making it harder for Phillips to dazzle with her comedic timing. Still, she shines through and is strong enough to shoulder the bulk of the film.

Erik Thomson as Steve, the owner of the removals company, is warm and sympathetic. His look of confusion concerning all that is happening around him helps anchor the action. Alexander England plays Tom, the stripper turned cleaner turned sex worker extraordinaire, is lovely to look at and knows just how to light up a dim bulb. Cameron Daddo as Gina’s husband Adrian effectively played the presumably cold husband with a secret. Unfortunately Webster didn’t explore the complex aspects of Adrian’s psyche, choosing instead to cast him in an unfavorable light, doing both him and the audience a disservice.

Is this an in depth look at what women want or need? No. If you want that, watch “Good Luck to You, Leo Grande.” Is it a fun trip into fantasyland where desires are fulfilled and life can have new starts? Absolutely.

Opening July 22 at the Laemmle Monica in Santa Monica.