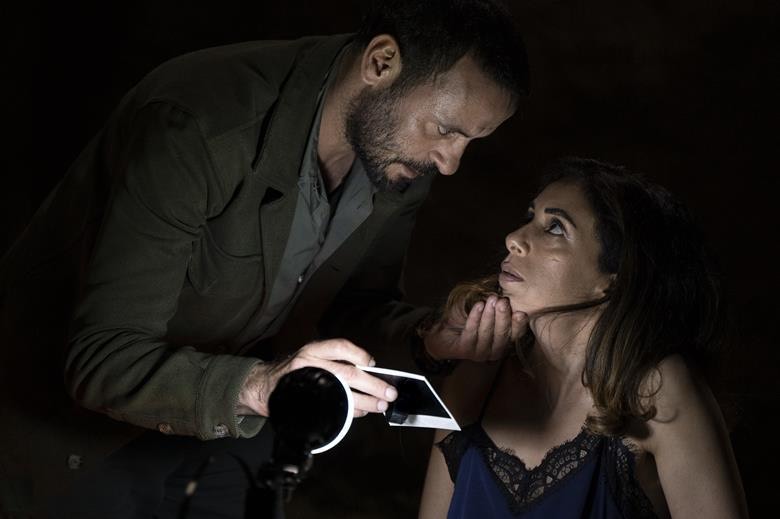 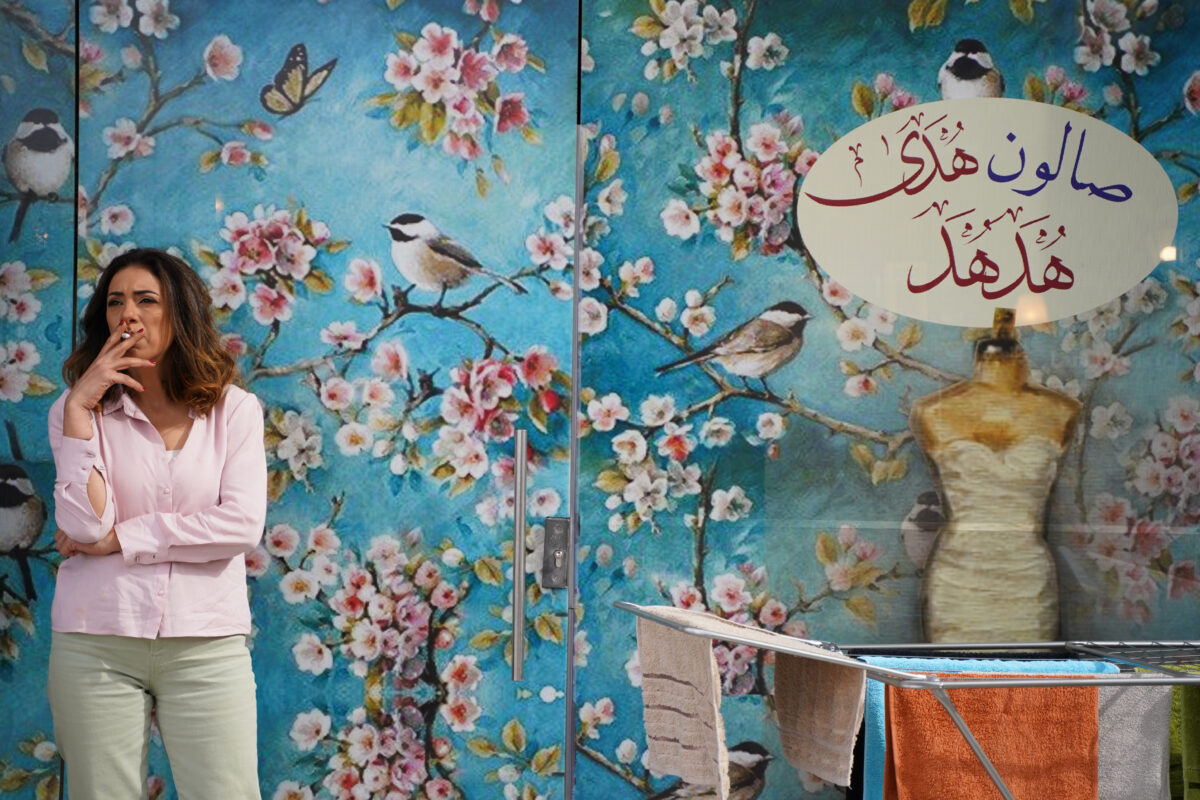 “Huda’s Salon” is an intense showdown between right and wrong, loyalty and betrayal, innocence and guilt, all of which are seemingly played without emotional shades of gray. An effective thriller that pits captive against captor, concretely and metaphorically, “Huda’s Salon” skirts the bigger unspoken issue of the Israeli occupation of the West Bank to focus on the aftermath. “Huda’s Salon” takes place in the Palestinian section of Bethlehem on the West Bank, walled off from the rest of the city by the Israelis in 2002 after a series of suicide bombings in Jerusalem. Behind those walls are the occupying soldiers, invisible to the residents but ever present. Palestinians may not enter or leave the West Bank without a permit issued by the Israeli Secret Service.

Huda’s hair salon is a refuge for Reem wanting a small moment for herself. With a new baby, a jealous husband, and suffocating in-laws, she has precious little time to breathe on her own. Huda has a sympathetic ear. She too had a bad marriage where the price for extrication was the loss of her sons, now grown. Of course there is a difference. Reem is a loyal, trustworthy wife whose husband’s jealousy is unwarranted. Huda, on the other hand, cheated repeatedly in her marriage. Still Huda is an eager listener and sympathetic friend. Until she isn’t.

Huda is a spy for the Israeli Secret Service with abhorrent recruiting methods and Reem is about to fall into a trap from which there is no escape. Kindly offering Reem a cup of coffee, Huda drugs her, drags her into the next room and strips her naked. Huda’s handsome young accomplice positions the naked Reem suggestively and Huda photographs the two in seemingly sexually intimate poses. When Reem awakens, Huda presents her with photographic evidence that will be presented to her jealous husband as proof of her infidelity unless Reem agrees to spy for the Israelis, reporting on anything she hears or sees that may expose rebels or anti-Israeli plots. The photos are Huda’s guarantee of Reem’s compliance. She has done this with many other young women and gotten the results she wanted.

Life becomes even more unbearable for Reem. Huda, knowing that Reem’s husband will never believe her, has what she thinks is the perfect foil. Reem has now been caught in a hell of someone else’s making. She has been loyal all her life, to her husband, to her family, to her country, and now her only choice is betrayal to all, a black and white situation that is anything but. Reem’s “good” has been trapped by Huda’s “evil.” 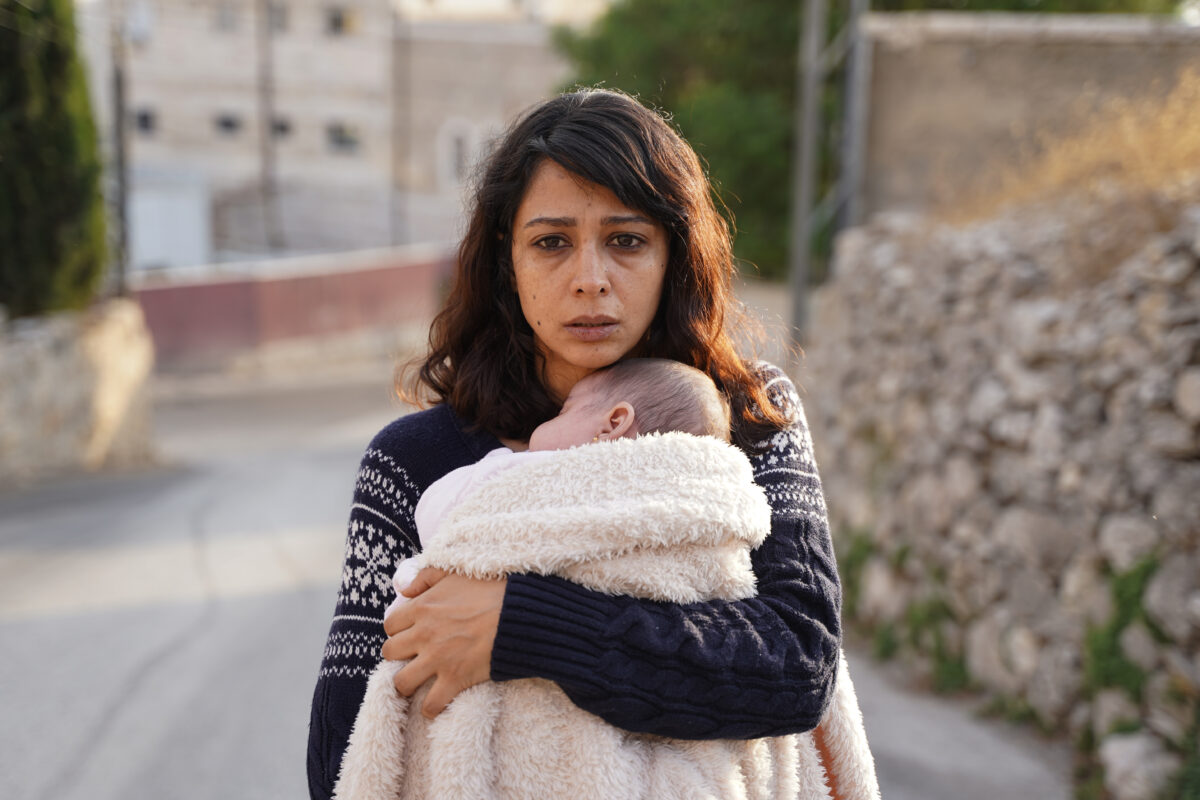 But as Reem is contemplating her lack of choice and the only way out, as she sees it, Huda is facing retribution. Hassan, a Palestinian rebel, has long had his eyes on her, suspecting what she has been doing. He and his henchmen arrive at the salon to unspin her web. Finding her stash of Polaroids, they are well on their way to unraveling her network. First to go…the male model. And then comes the face-off and complex negotiations between Huda and Hassan for information on the other victims. In a rare flash of regret, Huda is determined to save Reem, her most recent and innocent victim. Hassan is less than convinced and his henchmen begin their search, closing in on Reem, whose choices are so limited.

The tension mounts as Reem begins to understand her fate and tries to protect her daughter. The more that Hassan and Huda talk, the tighter the noose around her neck becomes. Her effort at trying to buy time for Reem both works and doesn’t. In her own perverted vision of the world, Huda saw Reem as a younger version of herself; as someone who would be grateful to find a path independent of a controlling and mentally abusive husband. But this is just the fantasy that she played in her mind every time she trapped a woman into her spy network.

Remarkably, Hany Abu-Assad, the talented writer and director, has made a film that studies and exposes the underbelly of desperate people. Yes, this takes place in the occupied territory and yes it is the unseen Israeli Secret Service that is at the root of Huda’s plot but decidedly not her plight. We don’t know how she was recruited and that is really not the point. Surely there were other alternatives. Why did she actively choose to betray her own people? Why did she ruin the lives of so many innocents? These are unanswered questions; they are questions each of us must answer whenever we make a decision that has an impact on others whether for good or bad. Abu-Assad has created complex characters reacting to complicated situations. His plotting is excellent and all the characters show depth. Although some would disagree, I found the ending satisfyingly enigmatic. Satisfying may be a poor choice of words because it’s really about whether Reem is trapped or finds an escape. Your view of the world cannot but help shape your view of what happens and what will happen. Philosophically, at one point or another, we are all trapped and must resolve our own endings.

The acting is remarkable. Manal Awad as Huda successfully conveys a defiant vulnerability even as she unapologetically ruins the lives of others. Maisa Abd Elhadi is outstanding as Reem, the innocent trapped in a room where the walls are contracting around her. Ali Suliman as Hassan is the world-weary terrorist who must try to snuff out traitors to the cause and yet is willing to listen. For him, betrayal is the ultimate sin, but never lose sight, this man is a terrorist in the eyes of most of the world. Here he is sniffing out Palestinian traitors to his cause, a cause that has resulted in the deaths of innocents. It can also be argued that he and his band brought some of the oppression down on his people. It’s complicated and therein is lies the primary appeal of this movie.

Opening Friday March 4 at the Laemmle Royal, the Town Center 5, and the Playhouse 7 and On Demand.