In ‘My Totally Intolerable Blocks,’ a lesson in diversity 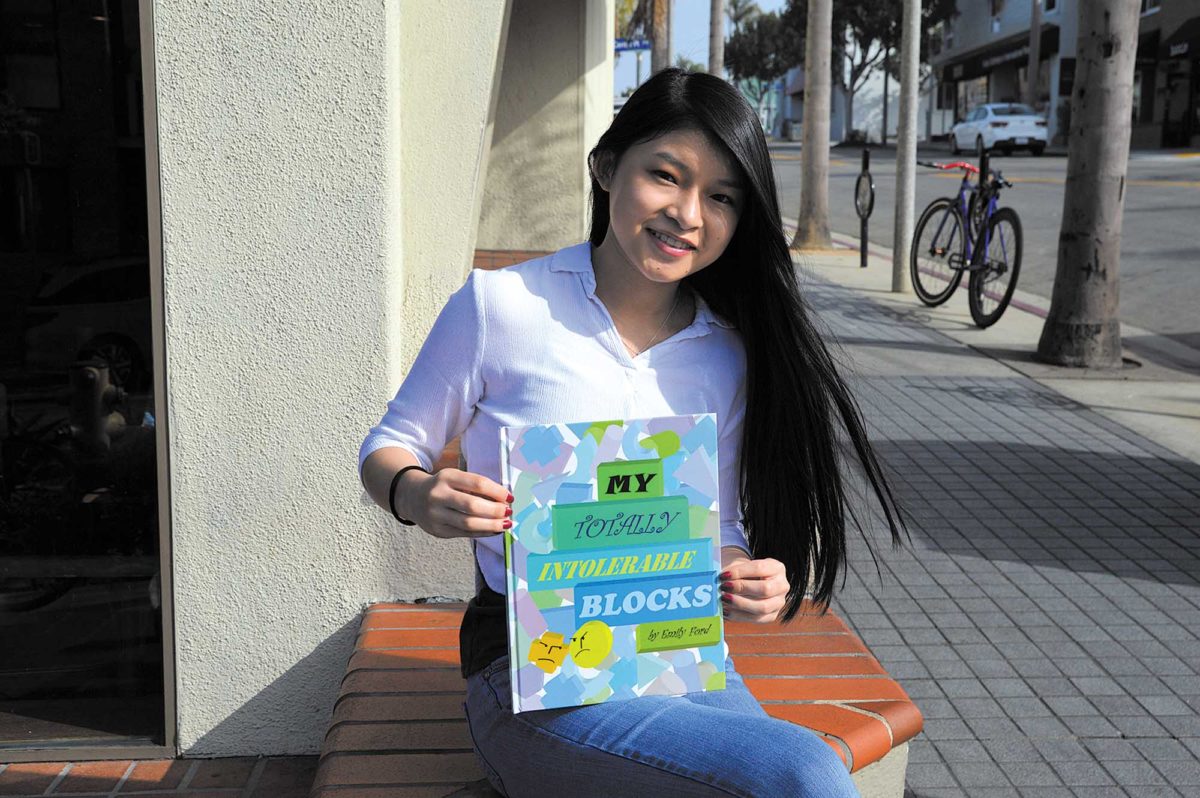 Emily Ford and her book, “My Totally Intolerable Blocks.” Photo by Phoebe Lai

Left at the gate of an orphanage at just a few days old, Emily Ford grew up a world away from her native China. Now she is challenging the culture that determined her fate and persists in China today.

Up until four years ago, China’s one-child policy remained a strict rule, one rationalized by the need to limit population growth. But as gender bias took siege, so did the male-to-female ratio in China.

“That’s what their culture is: they prefer males over females,” Ford said. “That whole preference shaped my entire life,” Ford said.

Ford, now a senior at Stanford Online High School, was adopted by an American family and brought up in Manhattan Beach, where she was raised to value acceptance and battle discrimination.

At only 16, she published the children’s book “My Totally Intolerable Blocks” in an effort to “teach kids about tolerance and diversity and how useful they are.”

The parable details blocks that argue about their individual significance to a child, who in the end realizes that he needs cooperation among all of the blocks in order to build what he needs.

The short story introduces principles that hold dear to Ford’s heart. She believes that the promotion of diversity in a community will result in solutions and goals that cannot be done alone. Although her book was geared towards children, she thinks that the lesson is something everyone can take to heart.

“I definitely think that adults can read and learn from it,” Ford said.

Over the course of two years, Ford wrote, illustrated, and published the book with the support of her parents. She read the book at her old preschool classroom, for her former teacher and her students, where she received a cheerful response from the young crowd.

While Ford has been working to spread the word about her book in California, her efforts have reached both national and global heights in recent months. The book, now available in E-book, has reached countries as far as the United Kingdom and Germany.

“We’re trying to get it into the 25 largest libraries in the United States…It’s been translated into Spanish and I’m working on Chinese and Arabic translations,” said Ford.

In the future, she plans to develop and produce toy blocks that match her illustrations, to form a dynamic package alongside the books. The hardcopy is available for purchase on both Amazon and her website, raisingtolerance.com, for $18. According to her website, 100 percent of proceeds will be directed to OneSky.org, a charity that helps “marginalized children throughout Asia receive medical care, education, and most important, loving caregivers.”

April Marano-Ford, Emily’s mother, fully concurs with her daughter, saying “in order to effectively solve world problems, we really do need to work together. We need other people’s ideas, so I think Emily is spot-on with that.”

Marano-Ford has supported her daughter’s endeavors, assisting with the illustration technology, publication process, and morale.

“We’re very proud of her for doing something like this and exposing her background, because it takes a lot of bravery to say ‘This is who I am,’ and ‘This is what happened to me.’ It makes me feel sad in one way, but proud in another that she’s trying to stand up for kids and people that have been persecuted or exposed to prejudice some way,” Marano-Ford said.

But, for Emily, publishing a professional short story at such a young age was something of a no-brainer when she already had the idea and inspiration for it.

“I had the idea and I got it done,” Ford said. “Diversity is always important, because there’s a lot you can do on your own, but with other people, there’s much more you can do with different ideas and perspectives.”