“In the Penal Colony” – Kafka, Glass, and Long Beach Opera 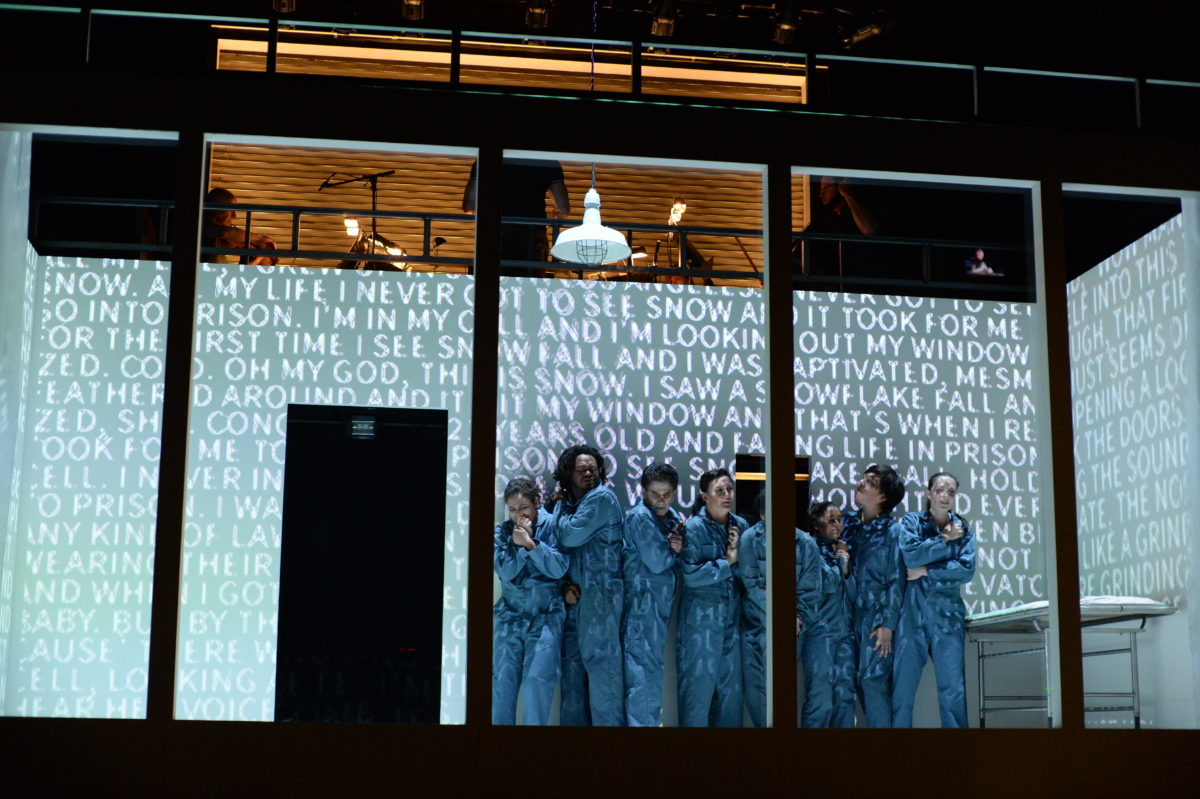 Crime and Punishment
“In the Penal Colony” – Long Beach Opera tackles Philip Glass by way of Franz Kafka
by Bondo Wyszpolski
Before one of last weekend’s performances of “In the Penal Colony,” the short but intense opera by Philip Glass based on the Franz Kafka story of the same name, Long Beach Opera artistic director Andreas Mitisek asked how many in the audience were seeing an opera for the first time. A sizeable show of hands ensued. And I’m thinking, hmm, what an introduction! Usually one steps into the operatic ring by way of “La Traviata” or “Madame Butterfly.”
The reason for this large number of neophytes is because Long Beach Opera has collaborated with Cal Rep (California Repertory) and its artistic director Jeff Janisheski. Cal Rep is the on-campus theater company at Cal State University Long Beach, and the performances of “In the Penal Colony” are taking place onsite in the Studio Theater.
The Kafka story is set on a tropical island, and an explorer has arrived to witness an execution overseen by an officer, both of them unnamed. The officer praises the old commandant (“The entire colony is his achievement”) who has since died and been replaced by a new commandant who is not so impressed by the killing machine, despite its intricate (and macabre) method of etching the crime of the condemned man onto his back… a process that goes on for a grueling 12 hours before the poor soul then dies and is ejected into a pit.
Essentially, the officer wants to impress the explorer (observer, traveler, visitor) with the artistry and efficiency of the killing apparatus, in hopes he’ll put in a good word to the new commandant. However, the visitor (and this is how the opera refers to him) is noncommittal: “I’m not here to judge this process. I’m only an observer.” 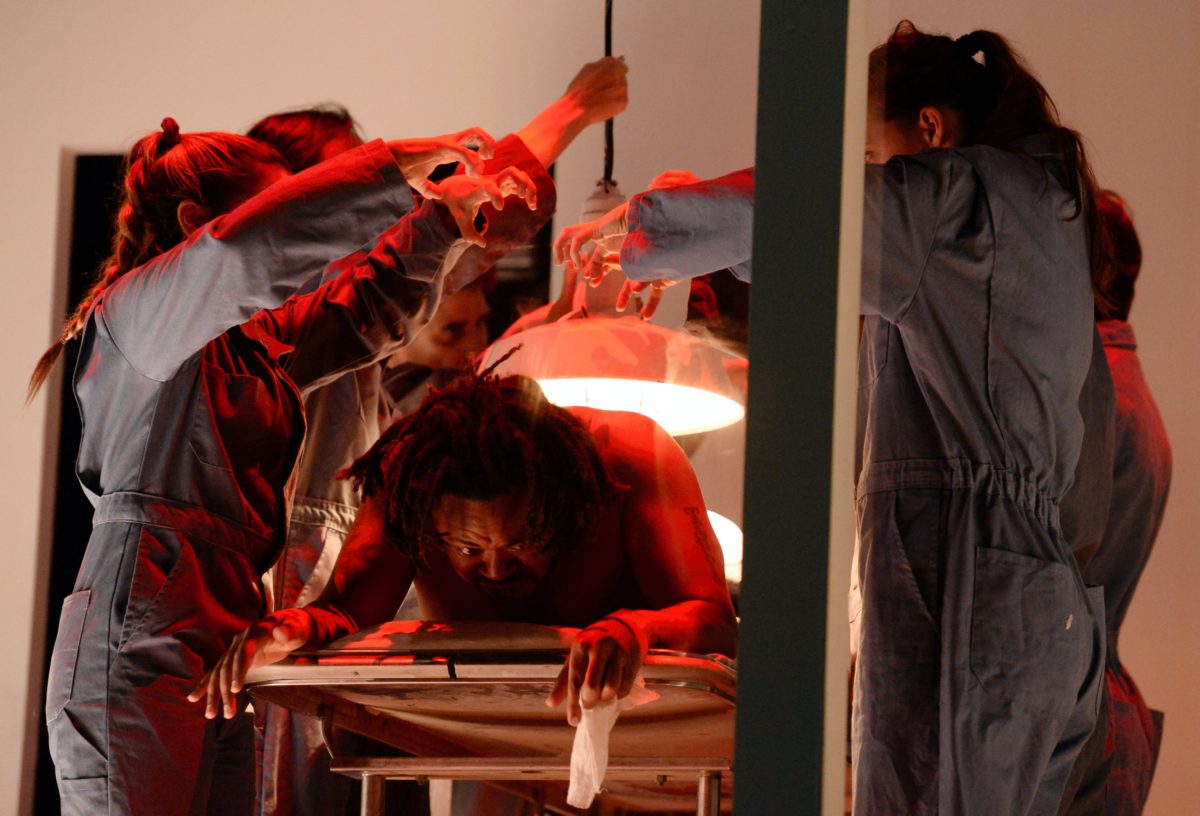 Apart from a soldier and the prisoner he guards (and neither have speaking lines), these are the sole characters in the story. The officer presents (pleads) his case; the other listens and occasionally asks questions, revealing that his thinking is more in line with that of the new commandant. What we can discern is that some people wish to hold onto tradition and protocol, even if it’s cruel and horribly outdated (there is no jury or judge, and the prisoner is not informed of his crime… until it is written on his body).
In the end, and since the story has been available since 1919 I hope this isn’t giving too much away, the officer has the prisoner released and he himself lies face-down inside the machine. The ultimate demonstration or sacrifice? What captured the attention of Philip Glass “is the moral inversion that takes place. The Officer, having started as all-powerful, becomes the victim, and he takes on the role with a kind of joy.”
When I read this in the program I thought of one of Kafka’s Zürau aphorisms: “The animal twists the whip out of its master’s grip and whips itself to become its own master–not knowing that this is only a fantasy, produced by a new knot in the master’s whiplash.”
The story is reminiscent of “The Invention of Morel,” by Adolfo Bioy Casares, which was also turned into an opera (by Stewart Copeland), and presented last year by Long Beach Opera.
I hope that the musical style of Philip Glass needs no introduction. It’s fairly recognizable and ubiquitous as well (Long Beach Opera has previously presented the composer’s “The Perfect American,” “Hydrogen Jukebox,” “The Fall of the House of Usher,” “Aknathen,” and “The Sound of a Voice.” LA Opera presented his “Satyagraha” earlier in the current season.)
Janisheski and Cal Rep’s contribution to the opera was to weave in snippets of interviews with members of Rising Scholars, an on-campus group of students who were formerly incarcerated, or else have or had family members who were jailed. Janisheski emphasizes that there are 2.2 million people in prison in the United States. And, while the U.S. has five percent of the world’s population, it also has twenty-five percent of the world’s prisoners. One gathers that most of those behind bars are there because of drug-related offenses, but it’s the numbers rather than the reasons for incarceration that Janisheski has focused on. 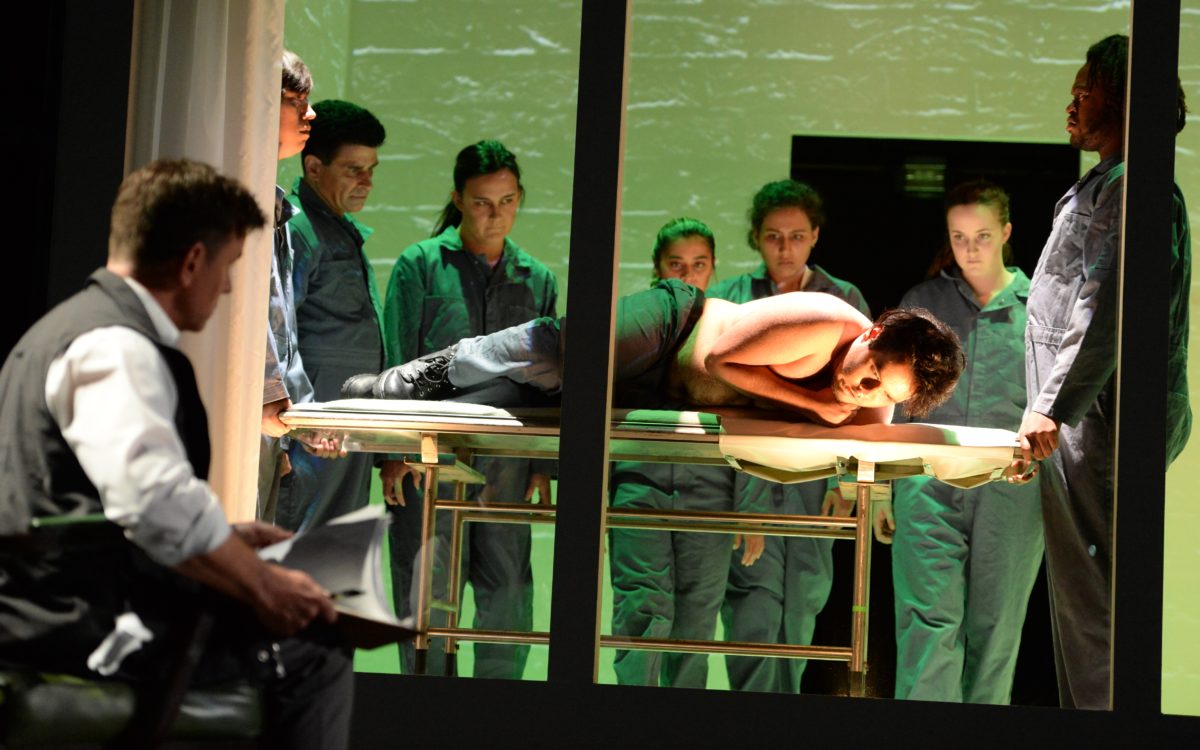 “In the Penal Colony” is really just a two-person opera with supernumeraries. Tenor Doug Jones and baritone Zeffin Quinn Hollis perform as the Visitor and the Officer respectively. Both are regulars with Long Beach Opera. Morgan Pimentel as the Guard is an unspeaking presence virtually throughout. But to flesh out the story, there are eight prisoners who periodically speak (not sing) a sentence or two culled from the Rising Scholars interviews. These lines were not in the Philip Glass opera (the libretto for which was written by Rudolph Wurlitzer), but were added for the ensemble by Juliette Carillo. They are spoken over the music, and do not interfere with the narrative itself. The idea, of course, is that they embellish it, and bring the issue of incarceration to the forefront of the conversation.
The question each of us must ask is, does this enhance or dilute the opera? Is this addition making the Glass opera more relevant or is it simply piggybacking on the opera to publicize the state of our current prison system?
My feelings are that the prisoners needed to look more like people who had actually served time in jail. With the exception of John E. Pizzini, who’d been locked up on four occasions, the others are mostly Cal State students, and they hardly look weathered. Here’s a line from Ciro Alegria’s “The Golden Serpent,” to illustrate what I mean: “Even after he has served his sentence, the man will always be a prisoner, for on his eyes will be tattooed the bars that imprisoned his soul, and mortified his flesh, and destroyed his nerves and rotted his bones.” Granted, South American prisons have been notorious for their cruelty, but with these actors onstage the opera does take on the appearance of a student production. Four or five men and women in their 50s and 60s would have visually spiced up the experience of viewing this work.
If we put that aside, the roles are nicely sung, and the music is robust but not grandiose or bombastic. It is, rather, sonorous and quavering, and lilting in a mesmerizing but pleasant manner. Glass wrote it for two violins, viola and cello, and then added a double-bass to keep it all grounded. Artistic director Mitisek conducts, as he often does.
The Studio Theater is a mid-sized venue, the quintet situated above and behind the set, which is fairly minimal: a small white room fronted by large clear panels in front of which Jones and Hollis spend most of their onstage time. The prisoners, a sort of mute, visual chorus, end up inside the cubicle, where there is also a “bed” which serves as the killing apparatus. The prisoners also enact the operation of the machine with a grim bit of pantomime.
It’s an interesting if somewhat minor work, not as detailed as the short story, which is a masterpiece unto itself, but an intriguing marriage of Kafka and Glass as filtered through the always fruitful imagination of Long Beach Opera. The shows last weekend were well attended, and there are, at least, limited $49 seats available for this weekend (Next up for the company is the world premiere of “The Central Park Five,” by Anthony Davis, taking place in June at the Warner Grand Theater).
In the Penal Colony is being performed from May 2 to May 5 (Thursday, Friday, and Saturday at 7:30 p.m., and Sunday at 2:30 p.m.) in the Studio Theater, California State University, Long Beach, 1250 N. Bellflower Blvd., Long Beach. The work is 90 minutes, no intermission, sung in English with English supertitles. (562) 470-7464 or go to longbeachopera.org. ER