Preliminary design for a stormwater infiltration project proposed for the Greenbelt in south Hermosa. Rendering courtesy City of Hermosa Beach

March 22 was one of best days of surf in an otherwise dismal winter for the South Bay, with shoulder-high waves met by unusual afternoon offshores. But as is often the case, the good conditions were accompanied by rain, keeping some frothing, but bacteria-averse surfers out of the water. The following week, officials unveiled a project slated for the area underneath the Greenbelt in south Hermosa that would capture some of the runoff generated during rainstorms, and maybe add a few more rainy days to the surfing calendar.

The project has been under discussion for about two years and is expected to enter the end of its preliminary design phase this month. It would divert water from the Herondo Storm Drain to an underground filtration system proposed for the area along the Greenbelt near Second Street and Valley Drive. By “infiltrating” the runoff through the soil, the project is intended to mimic the natural water cycle and limit the flow of harmful material to the ocean.

Hermosa Beach is part of the Beach Cities Enhanced Watershed Management Program, along with Manhattan Beach, Redondo Beach, Torrance, and the Los Angeles County Flood Control District. Together, the cities must comply with federal mandates, set and administered by the Los Angeles Regional Water Quality Control Board, governing the number of days that bacteria counts can exceed targets at local beaches.

A similar, smaller project was installed in Manhattan Beach several years ago. The south Hermosa location was chosen because of its proximity to the Herondo Drain. With a tributary area of nearly 3,000 acres, it is the largest storm drain in the Beach Cities and one of the largest in Los Angeles County. Water monitoring conducted by Heal the Bay near the Redondo Breakwall often reveals bacteria levels that are significantly higher than those recorded in other parts of the South Bay.

“It is our most problematic storm drain. It causes the most pollution, and the most effective way to address it is to infiltrate it. Moving through the soil essentially filters the water,” said Kristy Morris, environmental analyst for the City of Hermosa Beach, at a meeting last week on the Greenbelt near the project’s proposed location.

Despite the project’s apparent benefits, some living in the area were wary. A few residents of The Moorings, a condo complex adjacent to the Greenbelt and named for the boatyard that once stretched from Second Street to Herondo, showed up to the meeting with concerns. They worried about noise and construction impacts, as well as how the project would affect the future appearance of the Greenbelt.

“The residents, they like what’s there. If it’s lost, you change the whole ambiance and character of the buildings,” said Maria Haas, who lives in the condo complex.

Several people living nearby said last week’s gathering of city officials, project consultants, and interested residents was the first time they had heard about the infiltration project. Morris said that staff had notified the building’s homeowners association, and that written notices had been sent to every residence in the area. City Councilmember Justin Massey and Morris said that they would attend the complex’s homeowners association meeting later this month to answer questions.

Some residents had conflated the plan with a recent, much-publicized discussion about creating a decomposed granite path along a section of the Greenbelt. But project consultants with TetraTech, an environmental engineering firm hired to work for the project, said that when completed the project should be all but invisible. The only above-ground feature would be a covering used to access and change the filters. 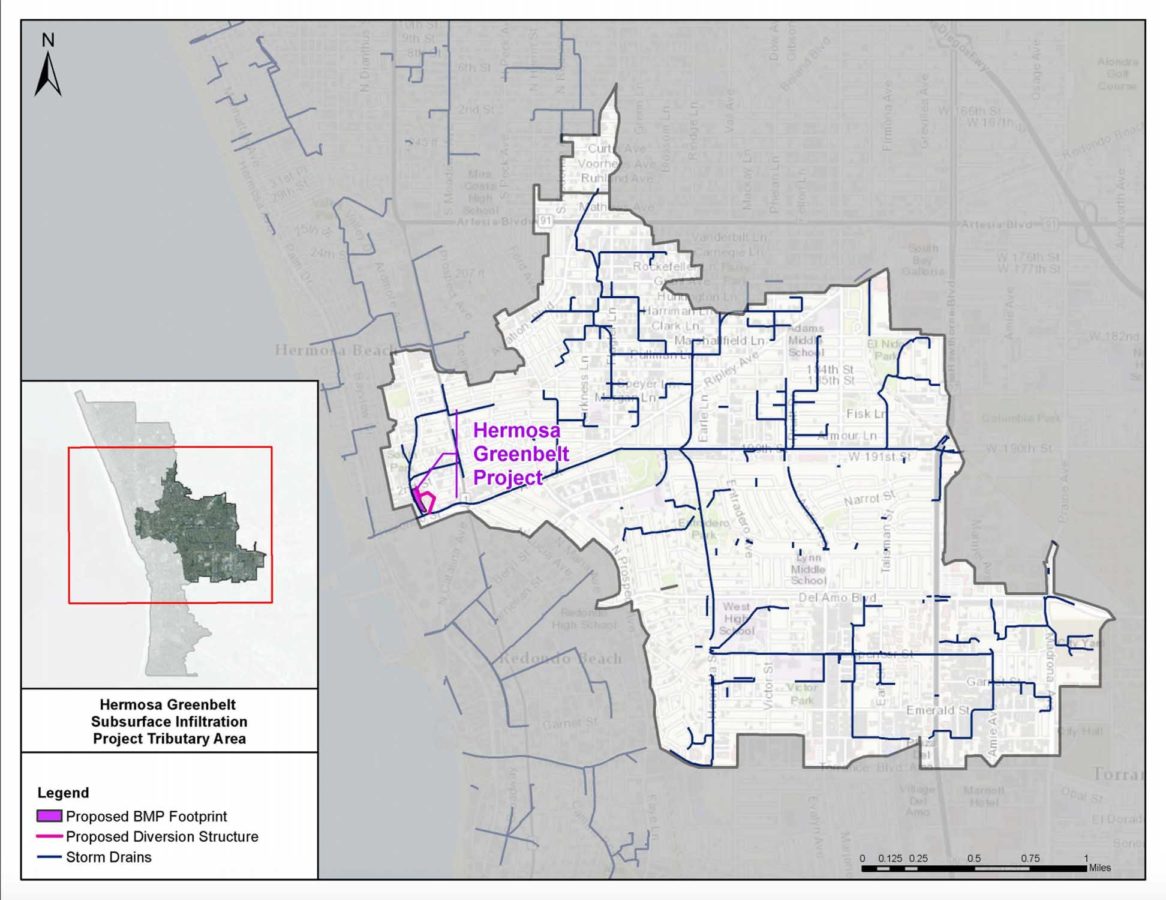 A map of the various South Bay sewers that feed into the Herondo venue drain, which lets out at Hermosa’s southern border. Rendering by Geosyntec

The system would work by installing a “diversion structure” under the intersection of Valley and Herondo Avenue. This would collect water, which would flow through a series of valves and treatment filters before being distributed to an “underground filtration gallery.” The project would collect water in dry weather and during the first 15 to 20 minutes of heavy storms to capture the “first flush” of motor oil, brake dust and other harmful materials that collect on paved streets and surge toward the ocean after prolonged dry spells. To comply with the watershed management plan requirements, the project’s total capacity would be about seven acre-feet, or about 300,000 cubic feet.

The costs for the project would be shared among cities in the watershed. Much of the funding will come from grants from the county and state, including about $3 million from Proposition 1, a water bond passed by California voters in 2014. Along with reducing stormwater flow to the ocean, the project would have the added benefit of reducing water needed to irrigate the Greenbelt.

It would also limit the intrusion of salty ocean water into the area’s groundwater. Because the water table in the area is relatively shallow — about 21 feet — the filtration galleries must sit relatively close to the soil level, and getting the water to them from a storage reservoir cannot be done with gravity alone, and would require electric pumps. Officials said that the noise from the pumps, which would be underground and encased in concrete, would likely be inaudible to those nearby.

Among the most significant obstacles to the plan is the relatively narrow width of the wood chip path along that section of the Greenbelt, and the large number of trees on either side. Along with dealing with utility lines buried under the path, construction would involve uprooting at least some of the trees.

According to a report prepared by a city arborist, many of the trees in the area are either unhealthy or members of an invasive species. Residents in the Moorings, however, disputed this characterization and worried about the loss of foliage.

“I want it to look exactly the same as it does right now,” one woman said.

Morris said that decisions about tree removal would be made in consultation with nearby residents. She also said that it was possible that the project’s design could be tweaked to make it longer and narrower. This would limit the reach of the basin near the Moorings and potentially reduce tree removal. But to achieve the same total volume could require extending the underground area north of Second Street. Extending to the south, toward the AES power plant, would require authority from Southern California Edison, and is considered administratively impossible.

Ultimately, despite the obstacles it presents, the project needs to be situated somewhere in that area, Morris said. Cities are legally obligated to improve water quality, and the size of the Herondo Drain makes this the best place to do it.

“We do have to capture a certain volume. And there’s just not many vacant lots or areas where we could site this,” she said.