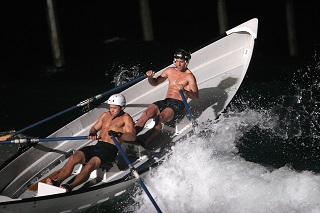 Lifeguard dory races may be the most exciting competition for spectators during the international Surf Festival. Photo by Ray Vidal

Manhattan Beach will host the 56th International Surf Festival this year. Competitors of all ages and abilities will participate dozens of ocean and beach events.

This year’s festival will be held Thursday, Aug. 3 through Monday, August 7. It kicks off with the Charlie Saikley 6-man beach volleyball tournament at 9 a.m. Thursday, Aug. 3.

To avoid conflict with their day jobs, lifeguard competition is held under the lights, beginning at 7 p.m. on the north side of the Hermosa Beach Pier. On Friday, Aug. 4 the  LA County Lifeguard Championships take place, featuring a U.S. Coast Guard Helicopter and an L.A. County Lifeguard Rescue Demo, a 6-Lifeguard Run Relay and the Bud Stevenson Intracrew Medley Relay where the Redondo/Torrance/Cabrillo team will attempt to defend its title.

As is tradition, each winning lifeguard has his or her name read aloud, is presented a medal, and then rings the Taplin Bell once for each time the individual lifeguard’s name has appeared on the trophy.

Last year Mel Solberg, of Torrance, increased his record-holding number of wins to 18.

“The Taplin is such a team sport. You can have the best swimmer in the world but if the rest of the team members don’t pull their weight, it doesn’t matter,” Solberg said. “I’ve been blessed to be a member of some great teams. It took me four years to make the team at Zuma, which was a dynasty in the 1980s. I won my first six Taplin Bell victories at Zuma. I really enjoy hearing athletes ring the bell for the first time because I remember what that meant to me.”

Close behind Solberg in wins is Tom Seth, of Manhattan Beach. Seth has rung the Taplin Bell 17 times.

For schedule of events, visit surffestival.org.