Ishibashi Orchards bridge to the past

The Tootle ranch home is filled with fine art realism by Mary Tootle.

The old Annie and James Ishibashi ranch house stood vacant for years after the couple’s passing. Its three-and-a-half are orchard became overgrown with weeds. 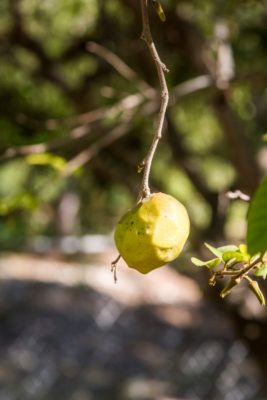 The Cherimoya fruit which resembles a chiseled persimmon is grown on the property.

“The weeds were practically up to my neck,”  recalled Mary Tootle, who purchased the property with her husband John in February, 2012.

Before they could begin reclaiming the orchard, they had to remove two 40-foot containers of “clutter” that had been left behind on the property

“That’s our whole thing. We aren’t about the house. Our focus has been the trees” said John. The Ishibashi family were well known on the Peninsula for their “Deliciously Yours, Annies Stand” at Abalone Cove’s Shoreline Park in Rancho Palos Verdes.

“Annie was a collector of things. After her passing, Vicki Pinkham, a neighbor, offered to help the daughter (Yvonne Yamashita) clean up. Amidst empty Cool Whip containers in the kitchen they found $100,000 tucked away in a cabinet.” Mary attributes the Ishibashi’s distrust of banks to the family having been sent to a Japanese internment camp during World War II. Following internment, the Ishibashi’s were one of only half a dozen Japanese families who chose to return to Palos Verdes and continue farming.

“They were experts at ‘dry farming,’” said John. Dry farming was which was a method of planting drought-resistant crops and employing moisture-enhancing techniques such as planting seeds deep and preparing a fine surface topsoil to delay evaporation. They were particularly skilled in creating bountiful crop yields with minimal disturbance to the land. They leased property from Marineland (now Terranea Resort) and what is now Trump National Golf Course. Bashi’s restaurant located at Terranea is named after the Ishibashi’s.

Mary said that thisi home and the Vanderlip Cottage were available for sale at the same time in 2012, and they chose the Ishibashi home, which is perched above scenic Palos Verdes Drive and overlooks the ocean. Despite years of neglect, it still  had 140 different fruit bearing trees. Their efforts to bring back the once abundant has been a seven year effort.

“We are working with a Mexican restaurant chain now to provide them with all of their avocados,” Mary said. “We have four different varietals of avocados and 90 trees, it is tireless work, but I Love every single tree.”

“All the trees are interconnected here,’ John said. “It’s an ecosystem. If one tree needs nourishment another neighboring tree’s root system will supply the nutrients. Trees give off smells based on being upwind or downwind to communicate with other trees.”

The trees are at least 60 years old.

The view of Abalone Cove from the backyard.

“A lot of trees planted nowadays are hybrids and are self pollinating. They don’t need a male and a female, or bees to pollinate. Our trees need bees to bear fruit,” John said.

He mentioned that avocados don’t ripen on the tree. They have to be picked and ripened in a brown bag or coupled with another fruit such as a banana to trap the ethylene gas that induces the ripening process. John says he can tell when the avocado is ready for picking by the size of the fruit. 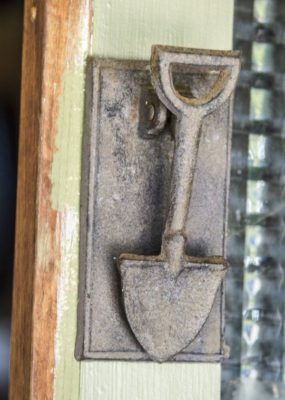 A decorative shovel mounted next to the front door.

Additionally, the couple has planted a vegetable garden that includes different kinds of squash, ornamentals and heirloom tomatoes. But with cottontail bunnies abounding, Mary mentions, they aren’t easy crops to harvest.

The family became interested in farming in 2000, when they sent the oldest of their two sons, Charlie, to boarding school in Santa Ynez. “I rented a small house close to the school that had an apple orchard. I became hooked on farming and decided I wanted to own land where I could grow things,” said Mary. “Both John and I come from farming backgrounds. He grew up on a cattle ranch in western Kansas and myself, we were farmers in Quincy, Illinois.

The Tootles employ a special irrigation system that John says is popular in Israel. He calls it a microdrip system which is a modification of a drip circuit. It allows the root system of the mature trees to experience root saturation intermittently. His system is rose colored, flexible rubber tubing with tiny patterned holes. It discharges a slow release, but at least once a month the trees will receive up to five hours of water to ensure the tree’s health.

“This process allows the water to go deeper into the soil than it would otherwise and really feed the root system,” said John. The way the orchard is surrounded by hills and the way the fog comes in from the ocean, help heat preservation and and moisture through precipitation. A green branch, he said pointing to one, is a healthy branch, the browner branches they cut back to preserve the nutrients for the healthiest portions of the tree. 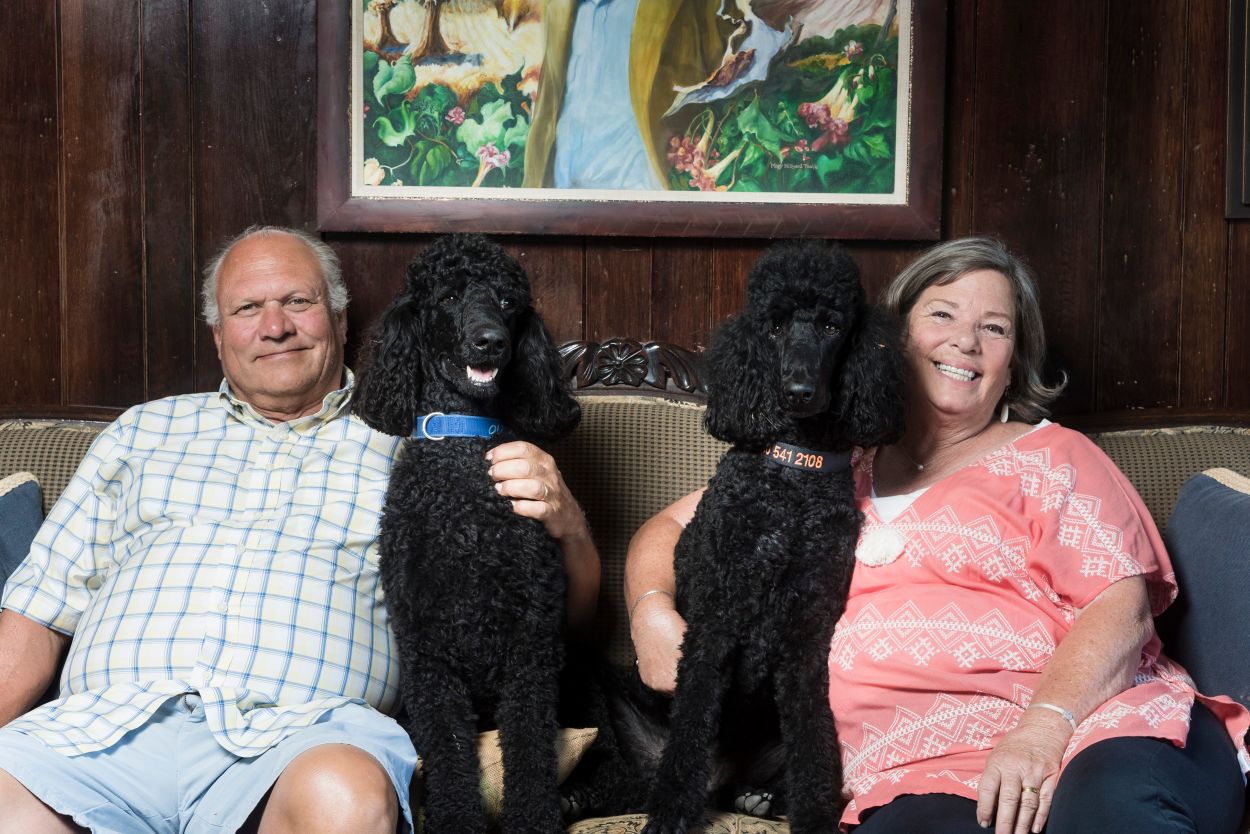 John and Mary Tootle with their two Standard Poodles, Milton and Oliver.

Unexpectedly found on the property were two, 3-foot by 2-foot whale fossils embedded in rock that they have been told are over 2,000 years old. These came as quite a surprise to the Tootles who had them hoisted to an area on the property where they can be readily enjoyed. These artifacts, along with the lush working farmland, tree canopies throughout and panorama ocean views are the Tootle’s sanctuary and a nod to the property’s predecessor who set the stage in motion over one half century ago. 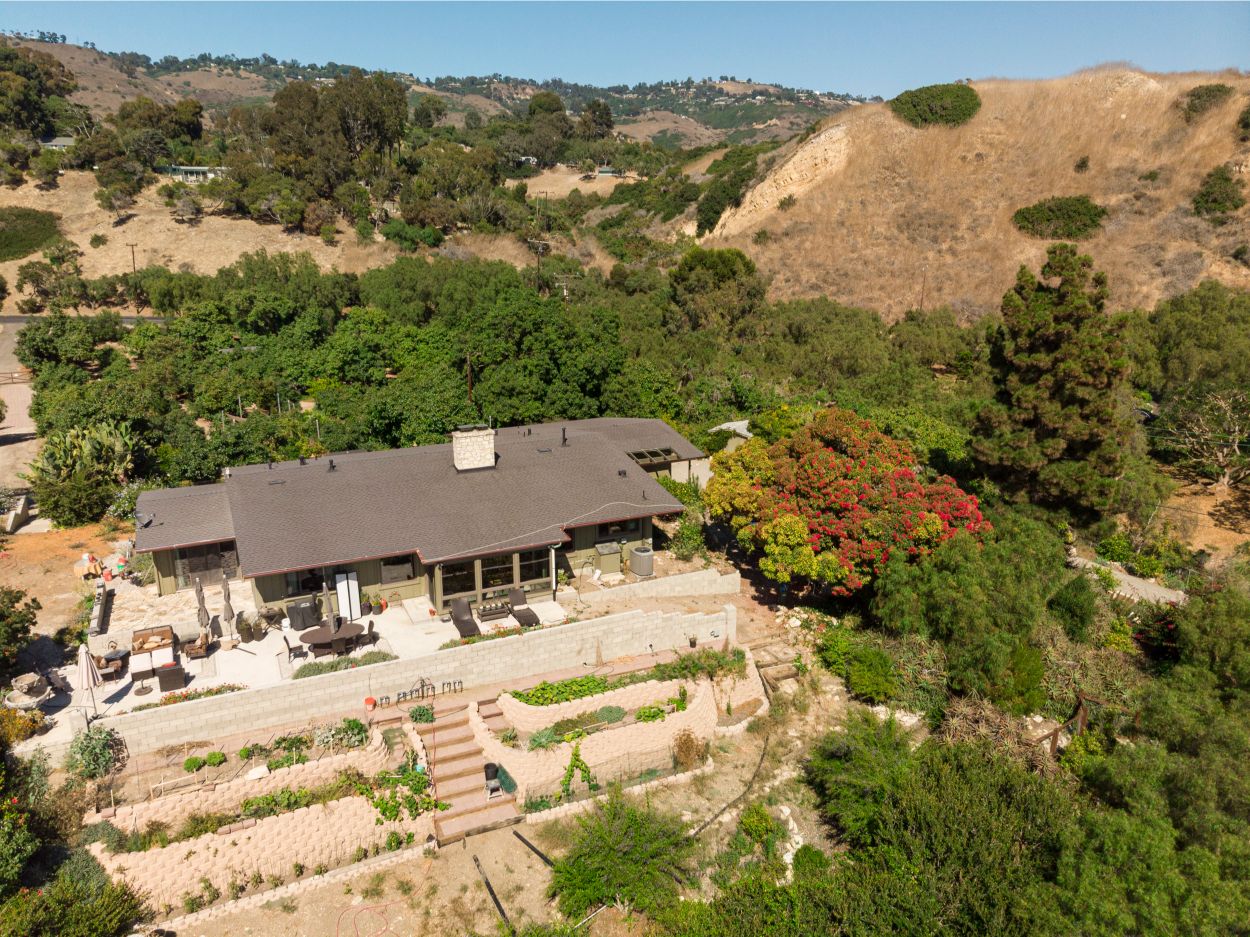 The family ranch and orchard.

Inside the 1952 steel and wood, Lloyd Wright/Richard Neutra inspired home, is an array of Mary’s artwork. It depicts characters such as Albert Einstein with individual wood tiles spelling out their defining quotes. Thomas Hart Benton, the famed Missouri muralist, who was the mentor to Jackson Pollock, is also portrayed. Mary has attended Otis College of Art and El Camino’s art program. Her most prolific art period was 1999 through 2000 when she lived in Santa Ynez and was inspired to paint because she had the time. She said she researches her subjects and then depicts their vulnerabilities and essence with highly saturated colors. 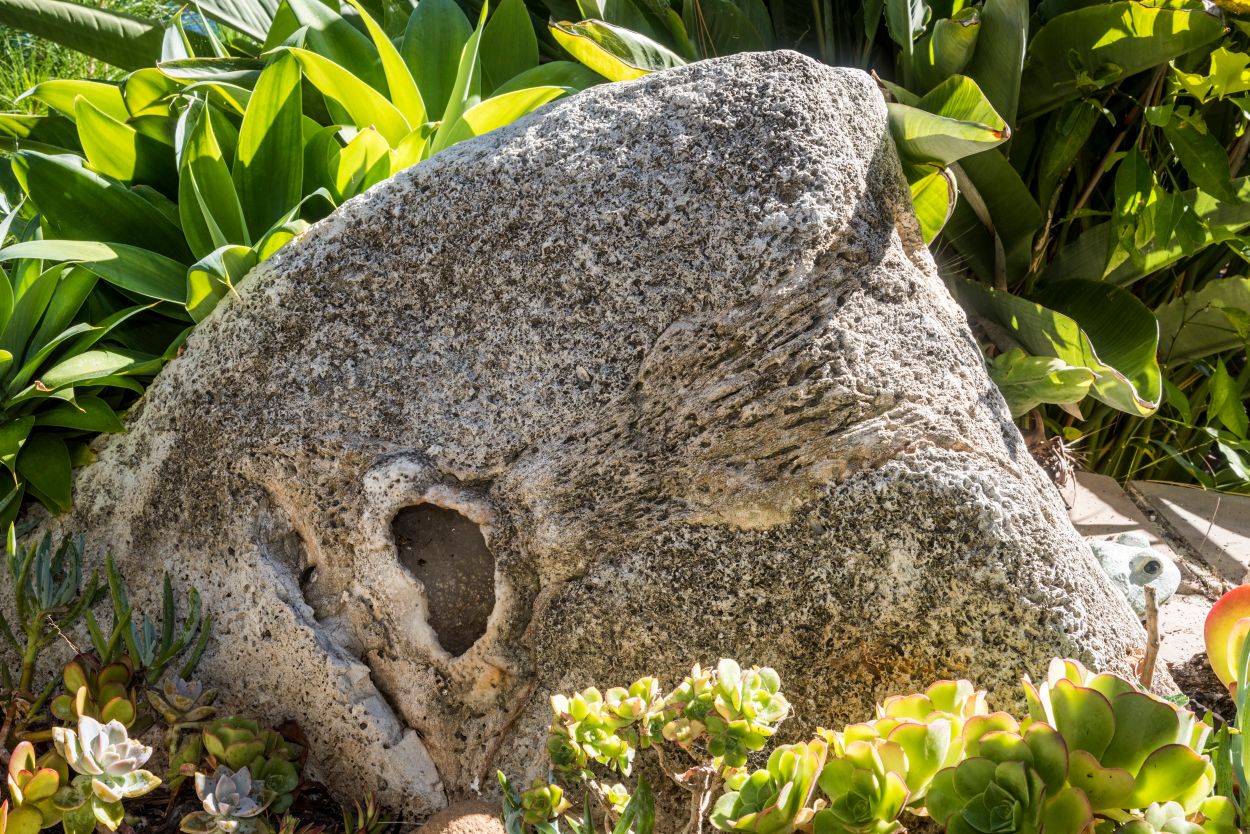 A fossilized whalebone believed to be over 2,000 years old was found on the property.

The Wayfarer’s chapel is just up the hill from the Tootle’s 3,000 square foot home. The church lights up at night and when people get married the bells go off for awhile said Mary. “It used to bother us. This never ending bell ringing, but then we learned that this occurrence is a sign that a wedding had occurred there and after they heard that, it completely changed how I felt about the tintinnabulation. Now I smile and say a prayer for them.” 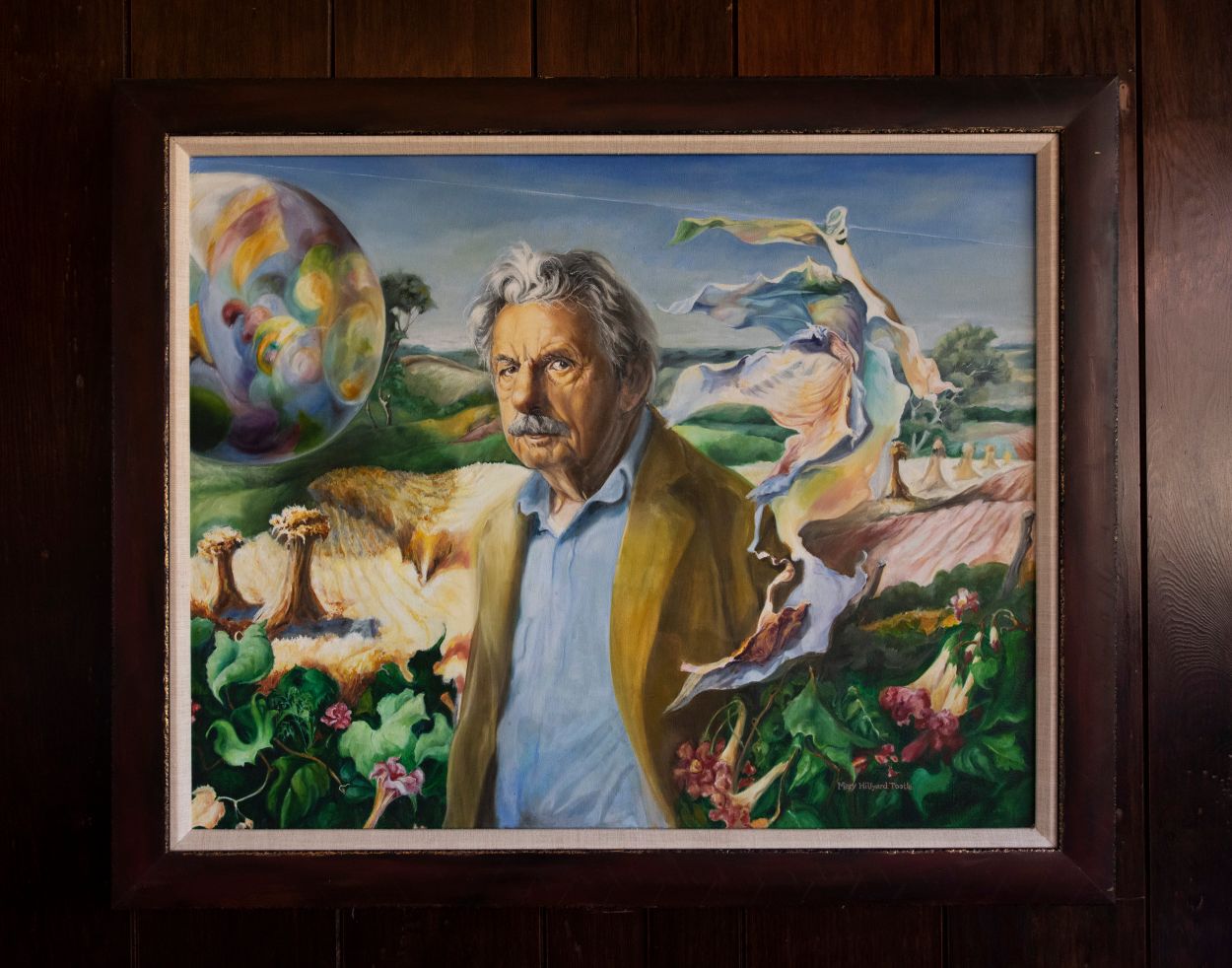