It’ll brighten up your evening 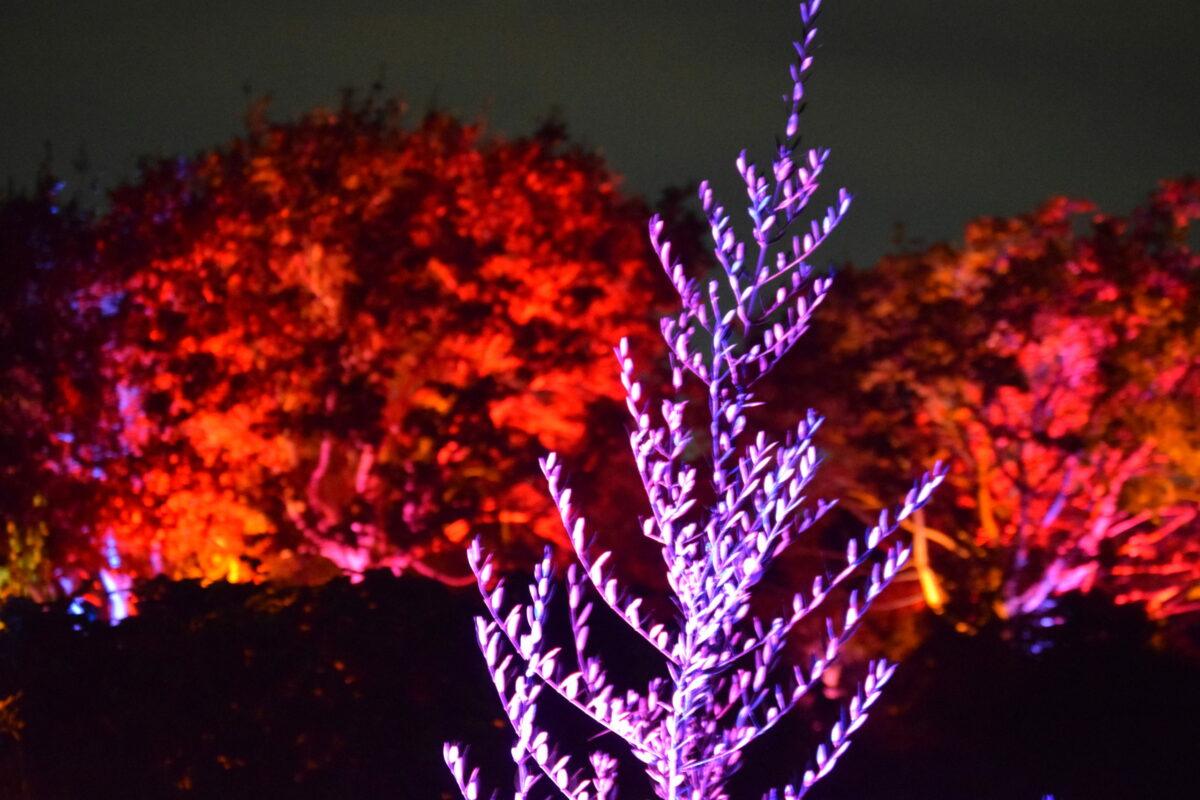 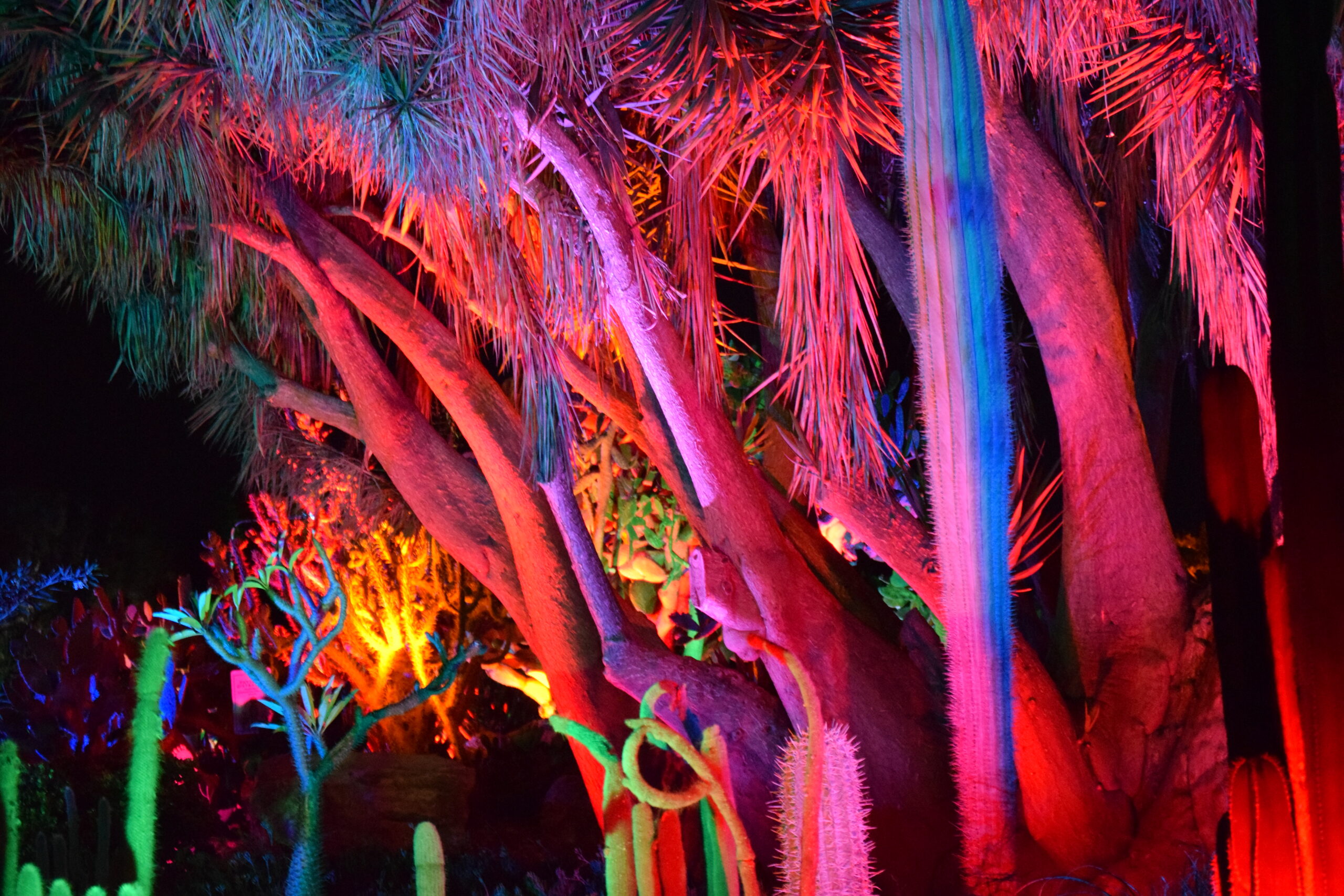 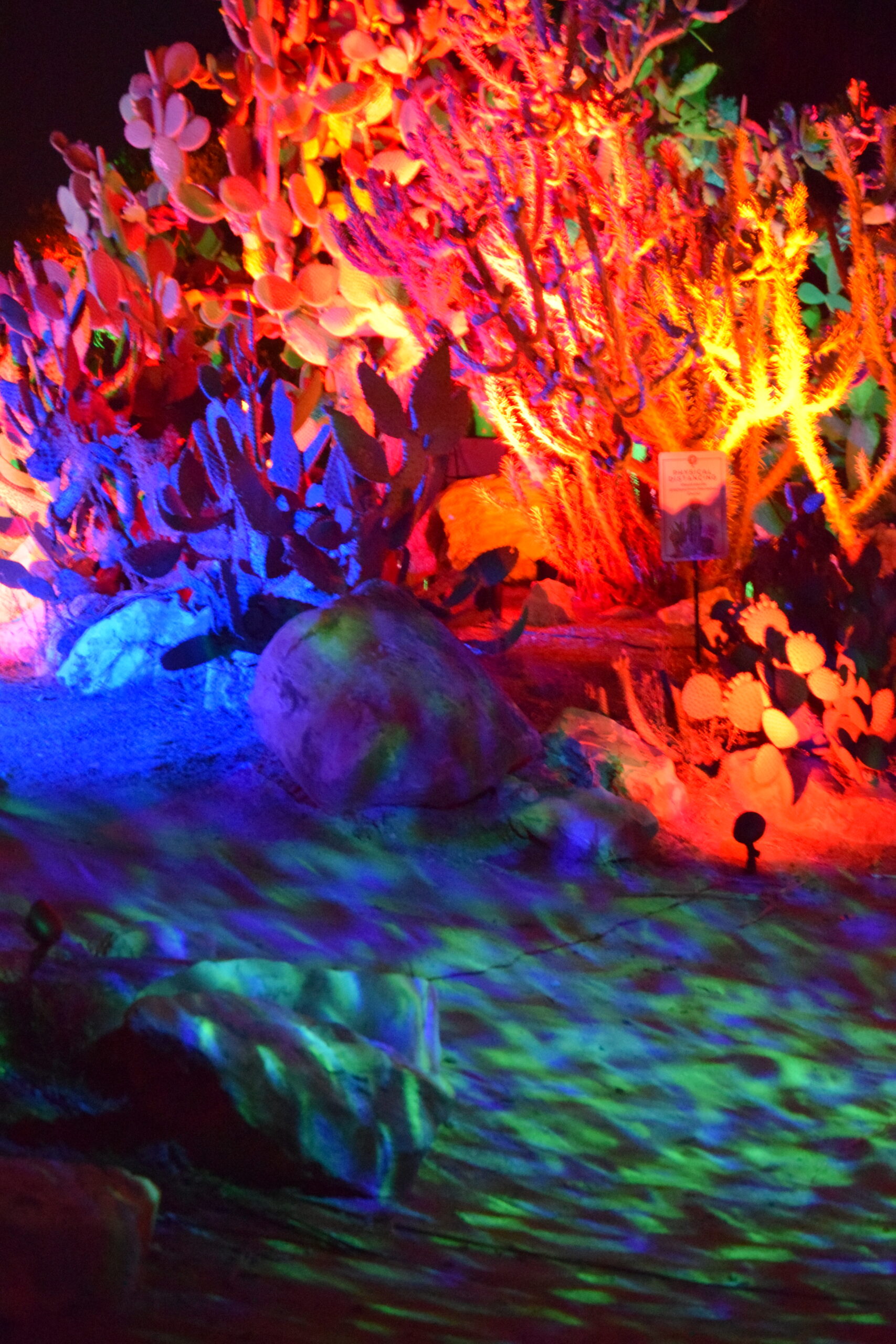 All lit up, and somewhere to go

A glowing review, of course

The wonders of orchestrated illumination are to be found in “GLOW” at the South Coast Botanic Garden. This nightly event, in collaboration with San Pedro-based California Outdoor Lighting, allows guests to meander through a select area of the grounds which have been festooned and enhanced by an array of luminous color. It’s a bit reminiscent of gliding through the Alice in Wonderland dark ride at Disneyland where the everyday world of flowers, plants and trees assume magical and even larger-than-life proportions.

This self-guided walking tour, which can be completed in about 45 minutes, leads to the Bohannon Rose Garden, the Banyan Grove, the Desert Collection, and the Living Wall, all of them transformed by lighting that ranges from pulsating to gently gleaming. The pathways are the same ones you’ve wandered during daylight hours, but in at least one place, from the Banyan Grove to the Desert Collection, there’s the sensation of wading through a flowing stream. Although it’s enchanting and easily traversable, it can be a little tricky navigating the terrain because while the effect of running water is one thing, the trail isn’t entirely smooth and a stumble or a fall into an imaginary river isn’t something anyone wants on their résumé. 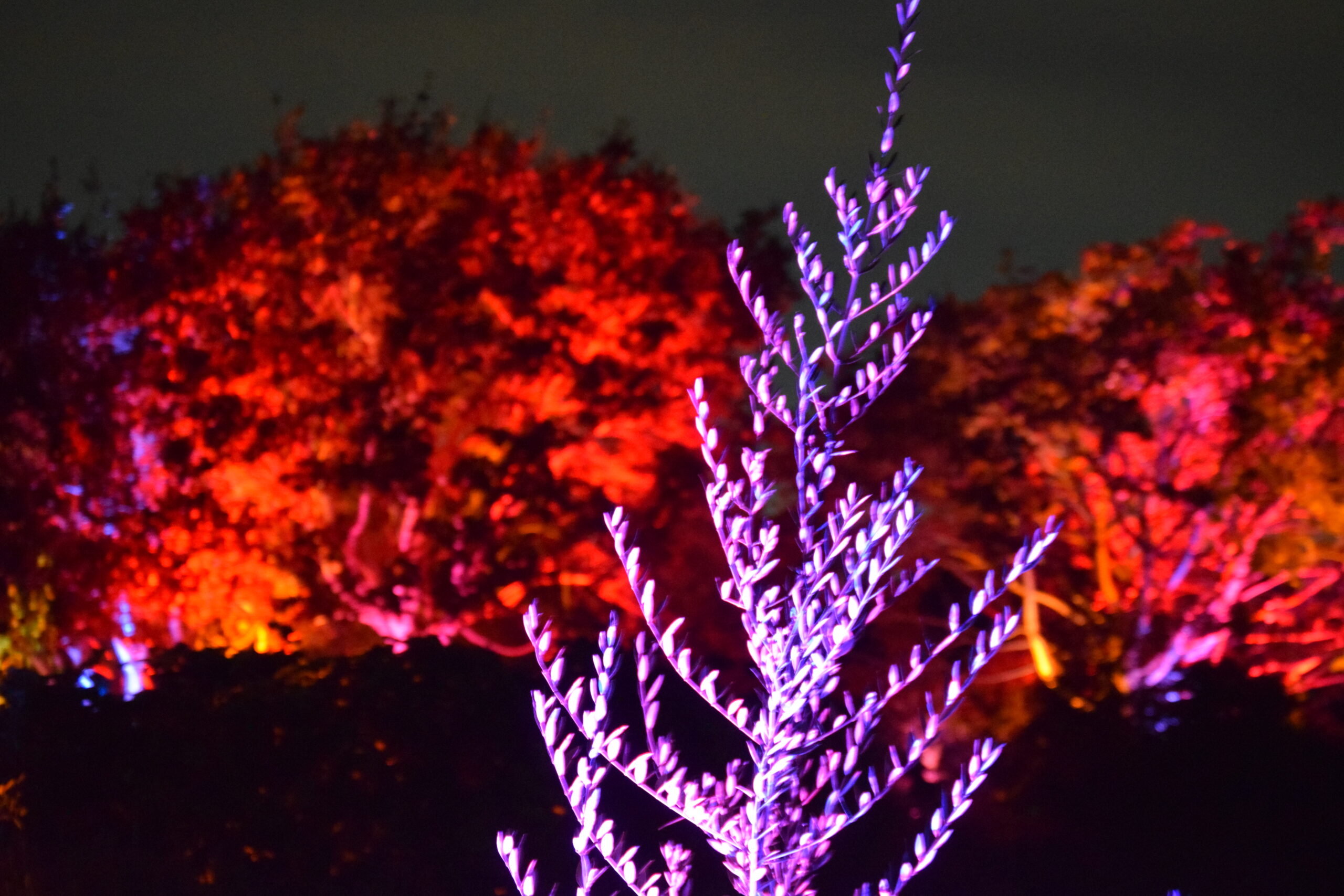 What’s particularly nice throughout the setup is the variety of induced moods. The blue-tinged Banyon Grove has glittering droplets of light to simulate falling rain, with music from Vivaldi’s “Four Seasons” to further enhance the sensation. Although there are benches here and there along the course of one’s perambulation, a few more for this special occasion would be desirable for those wishing to pause and contemplate the scene at their leisure. 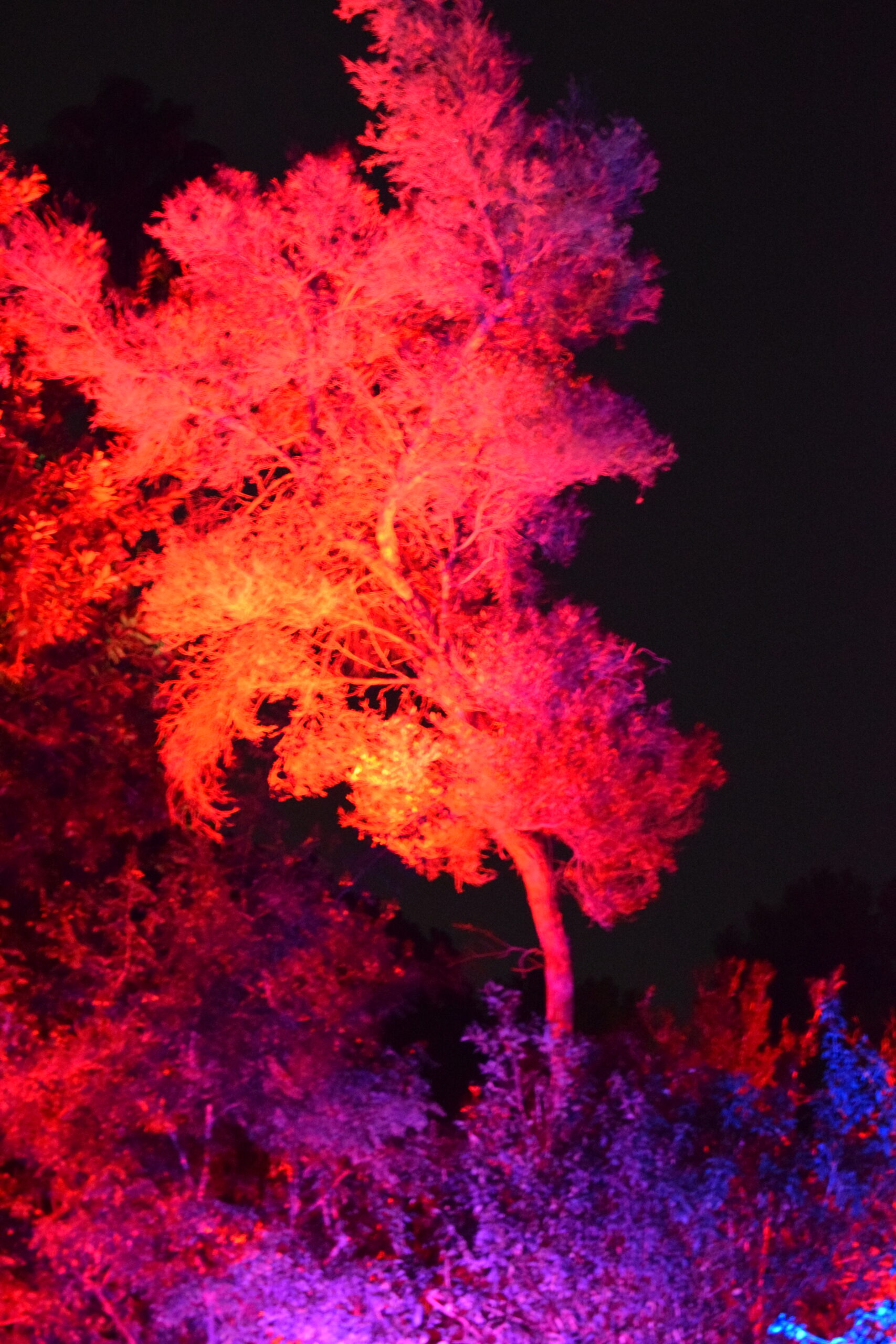 Perhaps you’ve seen photographs of the onsite installation, but pictures alone can’t do “GLOW” justice because it often seethes and glimmers and sparkles, and what is a picture but an inert slice of time gone by? Besides, it’s the melding of sight, sound, and early evening scents that combine to round out the adventure. Fortunately, the radiant decoration doesn’t condescend to any specific holiday theme: No reindeers or snowmen encrusted with shimmering beads. Every few steps there’s a new angle, a new perspective, on the edenic panorama. (I can’t help but wonder how this would look from the air, if we could somehow glide over it)

The lighting is at its most active in front of the Rose Garden where, at short intervals, there’s a lively club vibe of pulsing color patterns. Those who find the rest of the grounds a little sedate can regroup here. Those who prefer the sedate can wend their way to the Living Wall, where softer lighting tries on one color combination after another.

This appears to be a let’s-see-what-happens collaboration, and if successful perhaps “GLOW” can return during the more enticing spring or summer months when flowers are in bloom and willingly sharing their aromas. But what makes “GLOW” rather special at the moment is that people have been wanting, needing, and looking for a bit of communal entertainment. In that regard, it’s here at the right time. 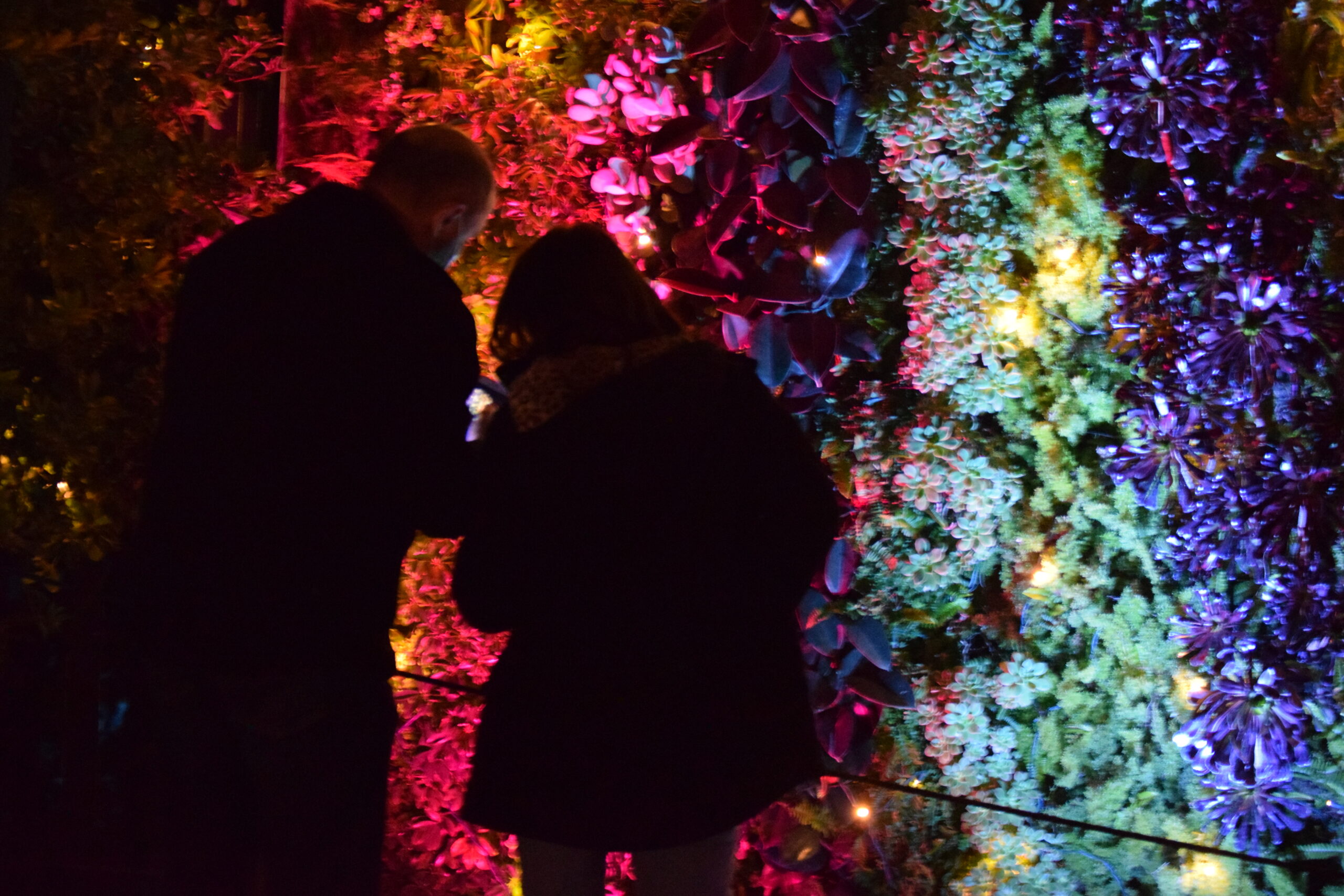 A couple in silhouette before the Living Wall. Photo

GLOW illuminates the South Coast Botanic Garden through Jan. 10, nightly except for Dec. 24 and 25. Admission is timed and ticketed, so that we won’t all crowd the premises at once, beginning at 5:30 and with last call, so to speak, at 8:30 p.m. Tickets, $34.95 general, $24.95 for members, but free if you’re under the age of four. This might be a little pricey if you live off the Hill, in the lowlands of Gardena or the swamps of Harbor City, and thus it would be nice if there were a few nights set aside for those who are financially challenged, especially in the ongoing wake of the pandemic. The garden is located at 26300 Crenshaw Blvd, Palos Verdes Peninsula, and to make reservations visit southcoastbotanicgarden.org/glow. ER