Billy Atkinson showing why the Jimmy Miller contest has become known as a showcase for upcoming local groms. Photo

The 2011-12 surf contest season had a promising beginning Sunday with the Eighth Annual Jimmy Miller Memorial Surf Festival at 42nd Street in Manhattan Beach. The air was 80 degrees and the water bare-back-warm, suggesting summer rather than the approaching winter. But the two- to four-foot swell had enough winter juice to break two boards in a single heat, send recurrent lifeguard Kevin Barry home with a bruised or broken rib and send another surfer home with a bruised or dislocated shoulder.

More than 200 surfers participated in the family-oriented contest, many of them groms, making the day a fitting tribute to contest namesake, Jimmy Miller. Miller was a Los Angeles County lifeguard and founder of Camp Surf, one of the first instructional surf camps for kids. Miller died eight years ago after struggling with mental illness.

Competitors were assigned to six-member teams, based on their abilities. Each team’s “A” surfer rode a board chosen by the opposing team from a quiver of donated boards. The boards included water-logged longboards, 12-foot soft tops, ‘70s single fins and a four-foot kneeboard with rope handles affectionately known as “The Pickle.” A 6-foot-2, 16-inches-wide, finless Seaglass Tuna, designed by shaper Tom Wegener, was removed from the quiver following the first heat when “A” surfer Charlie Miller demonstrated the finless could be ridden in the walled conditions, but not without jeopardizing the safety of the rider and other surfers. 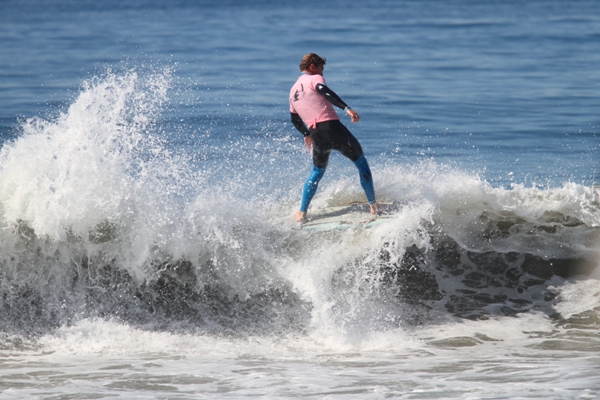 Kelly Zaun proves anything is ride-able with enough practice. He’s doing a floater on a 4-foot belly board known as “The Pickle.” Photo by Brent Broza (BrozaPhotos.com)

Contestants weren’t allowed to ride their own boards, but JS Surfboards rep Steve Meidroth brought down 30 new demos. His contribution earned him the Craig Best Award for Stoke and Generosity. 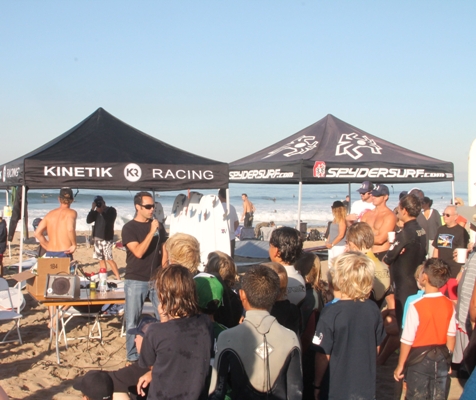 Contest director Jeff Miller talks about the history of the contest, held in memory of his brother Jim. Photo by Tim Tindall

The estimated $15,000 in proceeds from entry fees and the silent auction will benefit the Jimmy Miller Memorial Foundation, which provides ocean therapy for the physically and mentally ill, including underprivileged children and military veterans.