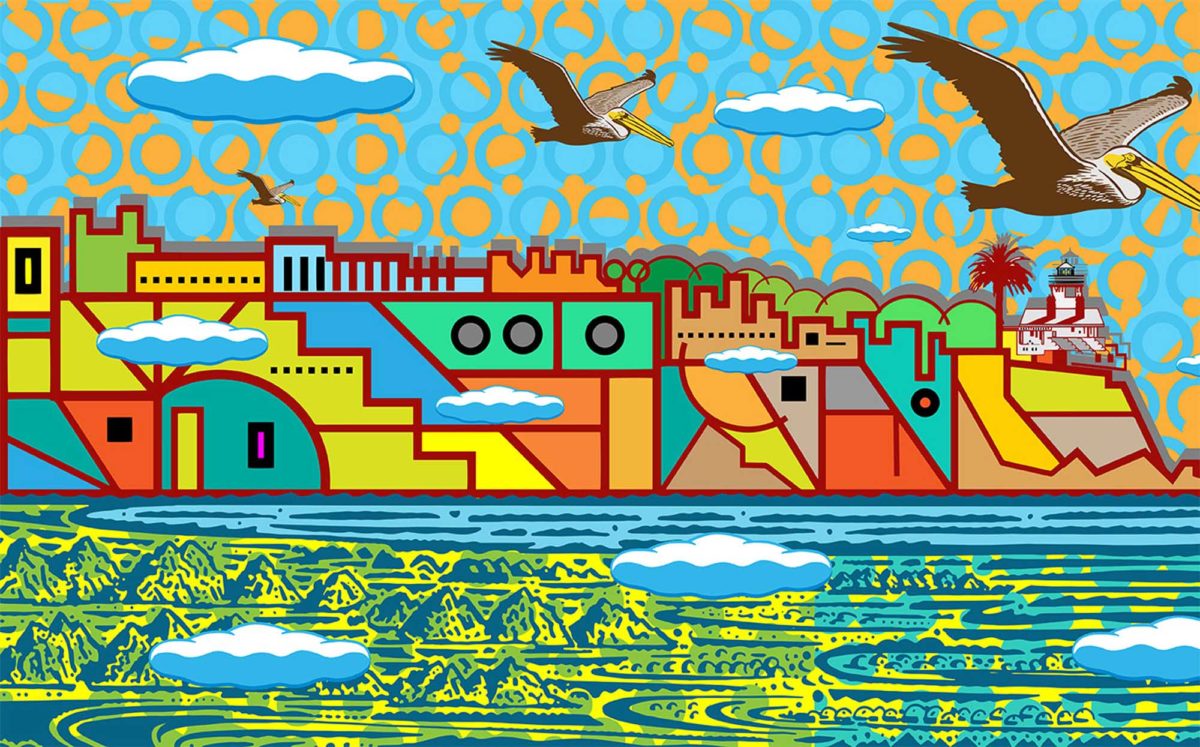 This is a detail of the mural that fronts the gift shop, which visitors see as they walk up to the aquarium. Artwork and image courtesy of John Van Hamersveld

This is a detail of the mural that fronts the gift shop, which visitors see as they walk up to the aquarium. Artwork and image courtesy of John Van Hamersveld

Something fishy at the aquarium

One colorful and kaleidoscopic mural after another: John Van Hamersveld has been riding the wave of artistic success these last couple of years. It seems like we were just celebrating his 32- foot high by 510-foot long wraparound mural that envelops the DWP’s Scattergood tank in El Segundo. Before that it was his circular frieze on the Manhattan Beach Creative Arts Center and his surf mural in downtown Hermosa.
The Peninsula resident’s latest project is a pair of billboard-size works at the entrance of the Frank Gehry-designed Cabrillo Marine Aquarium, one on the reverse of the aquarium’s marquee sign and the other fronting the gift shop.
According to Caroline Brady, executive director of the Friends of Cabrillo Marine Aquarium, “We get visitors from all over the world who want to see one of Gehry’s early works.” Van Hamersveld’s new murals, she adds, “will give art lovers even more reason to visit us. John grew up surfing our local beaches and his love of the ocean and its creatures really shine through this work.” 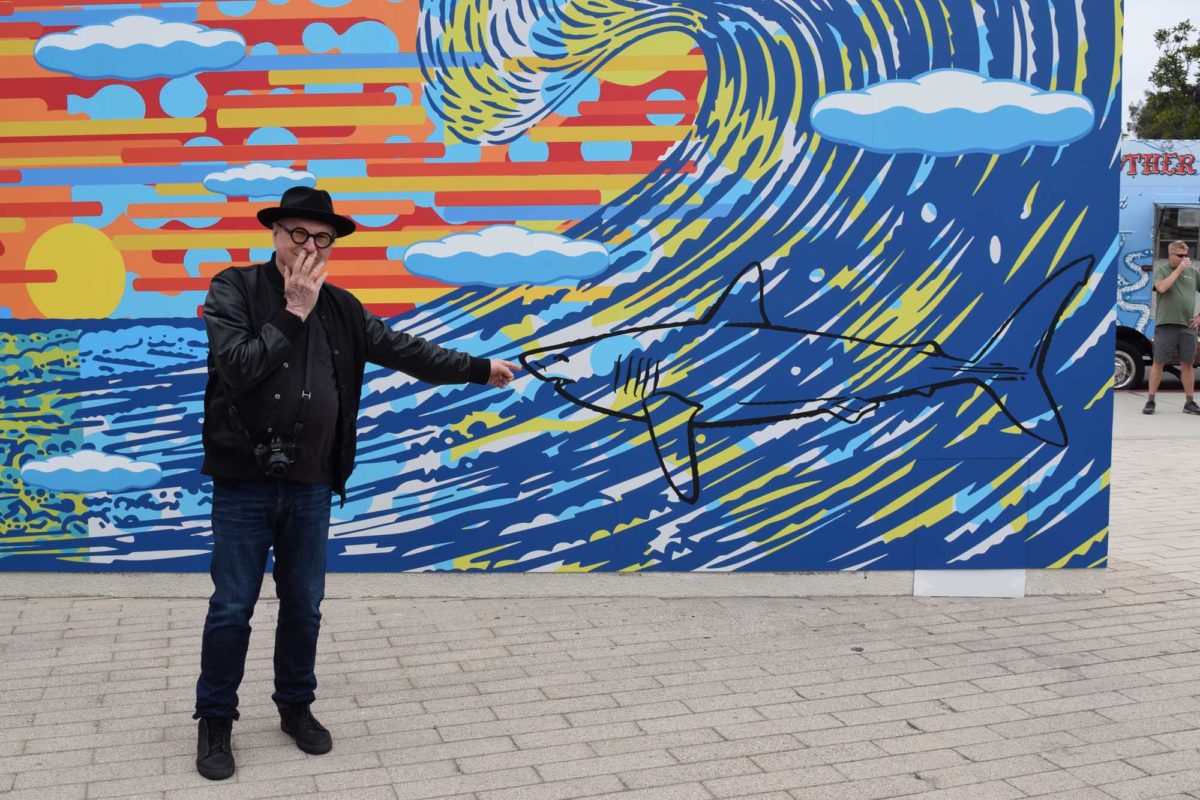 John Van Hamersveld pointing out a hidden visitor in his mural at the Cabrillo Marine Museum. Photo

“I was an artist and a surfer as I grew up living in my mother’s art studio in the back of the house on Chelsea Road in Palos Verdes Estates,” John says. In the late 1950s his very good friend Phil Becker would take him and other surfing buddies to catch waves up and down the California coast. It scarcely needs saying that Van Hamersveld earned everlasting fame when he designed the pop art poster for Bruce Brown’s 1966 film, “The Endless Summer.”
The El Segundo mural is a fireworks-display of color and movement, epitomized by tall intermittent waves that appear to be breaking in quick succession. Too bad it’s not mounted on rollers so it could spin like a merry-go-round!

The mark of excellence: Van Hamersveld’s logo and signature.

The wave motif is prominent in both San Pedro murals, the breakers coming ashore from the right. One scene appears to take place just before sunset, with seagulls flying out to sea. The seagulls and the clouds, of varying sizes, give the two-dimensional work a spatial depth, but then there’s a not-so-noticeable shark, lurking in the swells, which probably alludes to the aquarium itself, but also adds a slightly ominous note to the whole… not quite the same effect as an otter blissfully floating on its back.
I might add that Alida Post, John’s wife, when asked to say a few words about the designs, said, “It’s all about the fish… and having a focus put on an unsung Frank Gehry design.”
The other mural, the one fronting the gift shop, contains pelicans, more puffy clouds, a geometrically-patterned San Pedro coastline, and at the end of it the Point Fermin lighthouse. This is an especially intriguing work because of how it combines styles, the result being that the mural “pops” out at people walking up to the gift shop and the aquarium behind it. 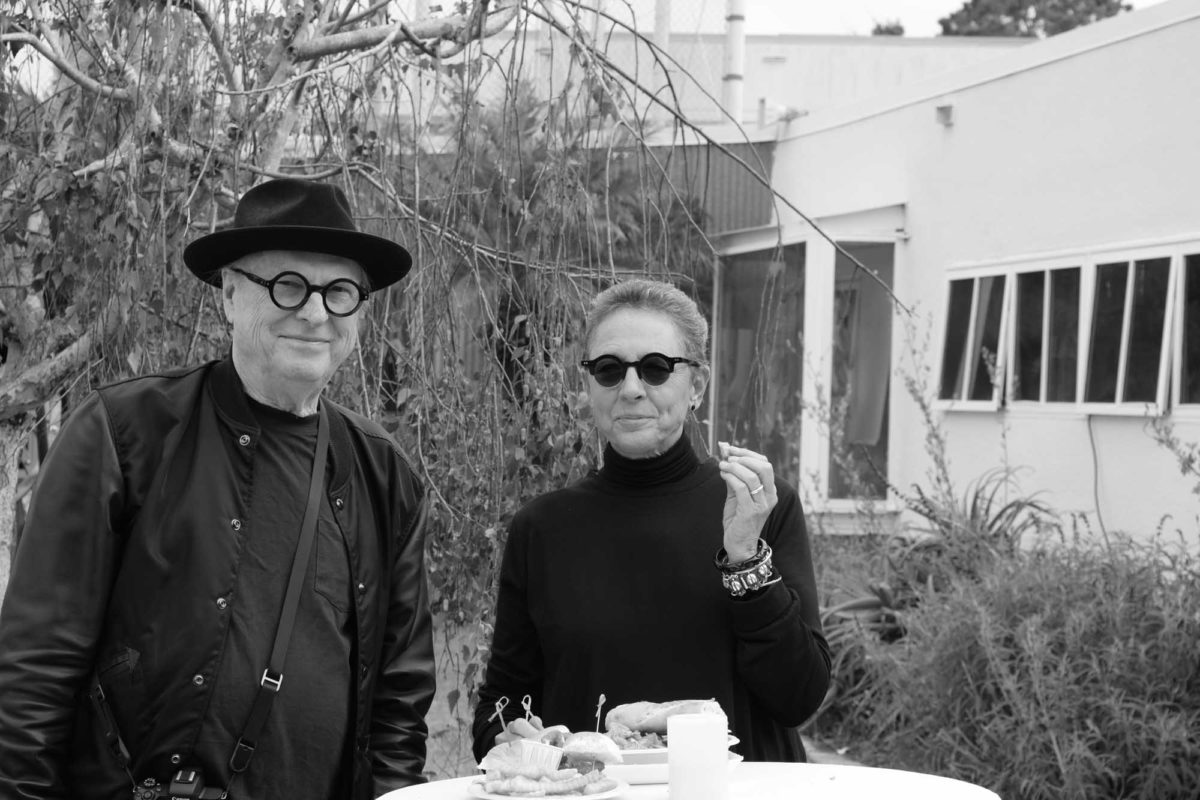 Seaside rendezvous
The colors and composition of these murals didn’t just emerge overnight. I think that John might want us to take note of the work’s reference to and similarity in line and contour to the Japanese artist Hokusai’s “A Wave at Kanagawa,” part of his “Thirty-six Views of Mount Fuji.”
John’s early work, whether we call it pop art or hippie modernism, emerged during an era that gave us flowery art nouveau designs, paisley patterns and Peter Max, and we see this mix of styles promulgated on many of the album covers that he created for Capitol Records in the mid-1960s. From there it expanded into the lavish poster art that John designed for Pinnacle Productions, which were printed to advertise the dance concerts held at the Shrine Auditorium near USC. 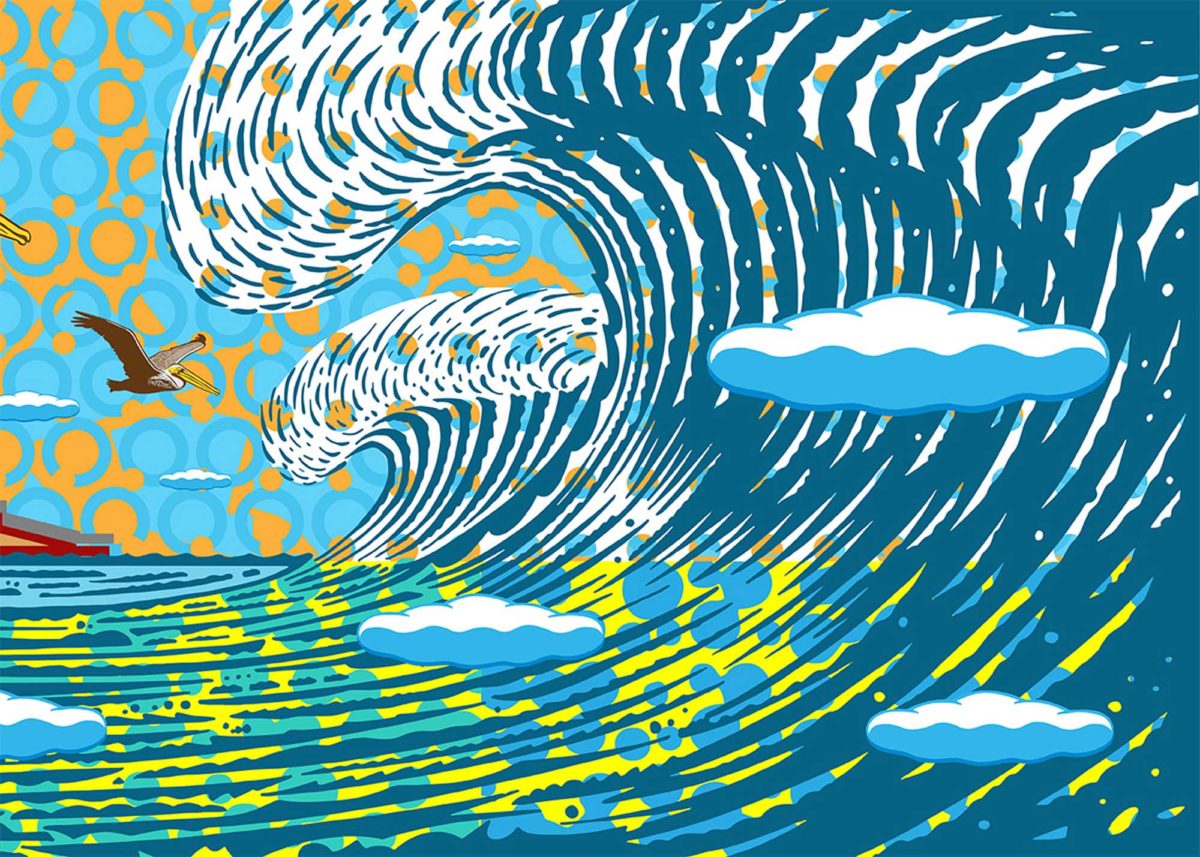 Another detail, perhaps with a nod to Hokusai, of Van Hamersveld’s mural that fronts the Cabrillo Marine Museum gift shop. Art and image courtesy of the artist.

So if we look at John’s vibrant early work we can see the thread that would eventually take him to the woodblock prints of Hokusai and other ukiyo-e (or “floating world”) artists of the 17th, 18th, and 19th centuries. It’s an interesting influence from a world away that John Van Hamersveld has adapted and made his own as he continues to help shape the visual look of California’s “surf culture” in the 21st century.
And of course he’s far from done. He has projects underway in Venice and Santa Monica, and in September an exhibit of his mural work at Point Loma University.
Limited edition prints of the two new murals, with a portion of the sales going to the aquarium, are available.
The Cabrillo Marine Museum is located at 3720 Stephen M. White Drive, San Pedro. (310) 548-7562 or visit cabrillomarineaquarium.org. ER