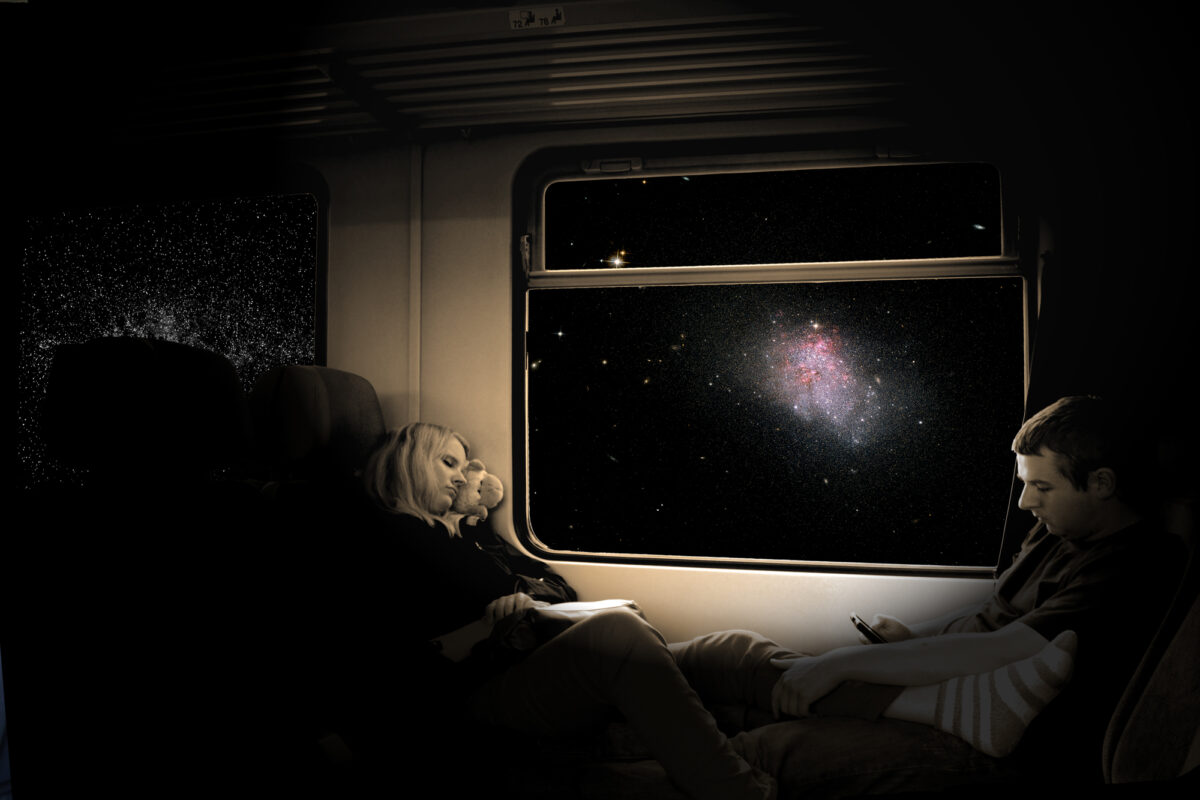 “Starlight Train,” by Judy Herman. This work was awarded the Palos Verdes Art Center’s “Best of Show” in photography in 2015 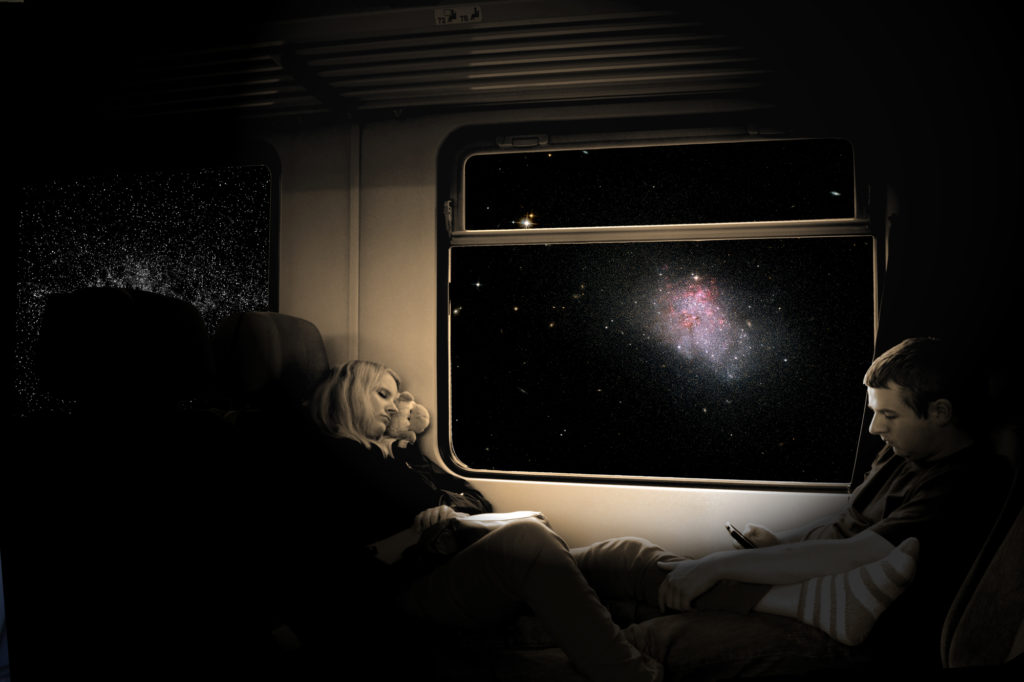 “Starlight Train,” by Judy Herman. This work was awarded the Palos Verdes Art Center’s “Best of Show” in photography in 2015

Aiming High for that Desired Result

When Judy Herman is asked whether she considers herself a painter or a photographer, her reply is that she employs different mediums. “My approaches (to making art) range from realistic to completely non-objective,” she wrote some years back. “Light, color, shapes and textures are what count. Subject matter is secondary.”

In other words, we won’t be pinning her down quite so easily, but on the other hand her willingness to explore visual sensation and impact has let to some fine and even startling work, such as “Starlight Train,” which won the Photography Award at the Palos Verdes Art Center’s 2015 “Best of Show” exhibition. The photograph was taken in a train compartment while Herman was traveling between the German cities of Lübeck and Rostock, and yet by adding a swirling galaxy or nebula to the background her image takes on a strange interstellar beauty. A similar work, “Cellphones,” reveals tourists or commuters too preoccupied with their electronic devices or newspapers to take in the outdoor scenery, in this case as the train they’re in departs historic Verona. 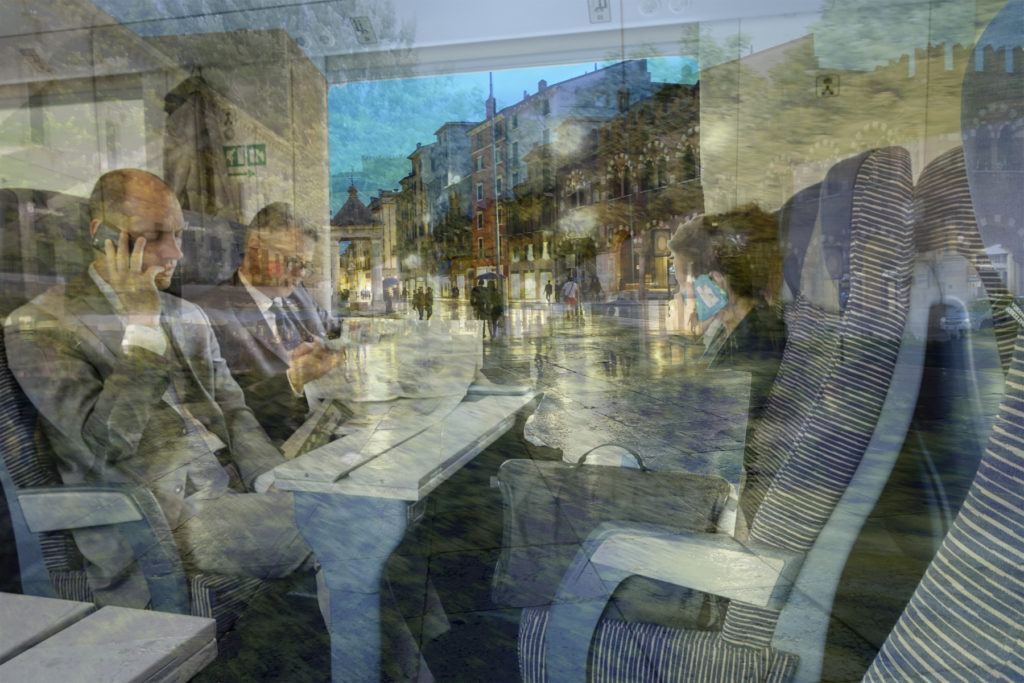 “Cellphones,” by Judy Herman, taken in a train departing Verona

“The series is about people being so absorbed,” Herman explains, “that they don’t see these fabulous sights that are going by.” Whether napping, wearing headphones, reading, or conversing on their phones, these men and women are all turned inwards.

However, the images have clearly been doctored or enhanced for effect.

“I don’t think there’s anything wrong with Photoshop,” Herman says, her philosophy being that the artist does what’s necessary to achieve the desired result. “I also like combining things to create something,” she adds, later directing me to a quote by Eric Fischl from his book “Bad Boy: My Life On and Off the Canvas.” Fischl praises collage to the skies and declares that it imitates how the mind works. “It breaks down the world of images into fragments of memory torn from their original context.” In collage, one juxtaposes often disparate images to create an inner dialogue, an inner peace or an inner tension. “Starlight Train,” I think, is a prime example of this.

Now, as I mentioned above, we won’t be pinning down Judy Herman so easily, and on one of her recent photographic excursions she backed off from interfering too much with the original image.

“In the past my photography has been about invention and imagination,” Herman recently stated, “creating my own reality with composites and digital manipulation. On a March 2017 trip to Cuba I decided to try my hand at documenting photography in an attempt to capture a way of life that may soon disappear.” 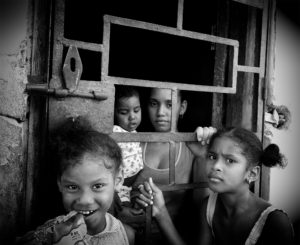 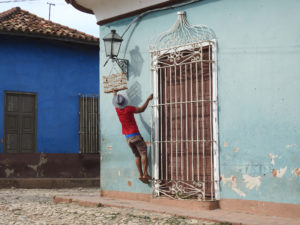 “Birdcatcher,” by Judy Herman, is from her trip to Cuba earlier this year.

In Cuba, she says, as we sit in the dining room of her home in Rancho Palos Verdes, “I didn’t want to make too much of a collage or montage, I just wanted to let the subjects speak for themselves with what they were doing. It’s always a dance with artists and their subjects.” This time, though, she’s let her subject take the lead.

Two of the images, “Havana Mother” and “Birdcatcher,” are among the works included in the show featuring members of PADA, the Photographic and Digital Artists group, that opens Thursday, July 6, at the Loft in San Pedro.

PADA was formed in January of 2006. Currently there are 30 members.

“Some people at the Palos Verdes Art Center,” Herman recalls, “were talking about the fact that there were seven or eight artist groups affiliated with the Art Center, and most of them were painters. But there was nothing devoted to photography.” As a result of that discussion, “a few people like Catherine Balcom and Pauline Falstrom were instrumental in starting this photography group.

“Pauline knew my husband, John Wessel, who was very interested in photography. She invited him to join in and I guess I tagged along. So I was part of the group that established it, and here we are.” 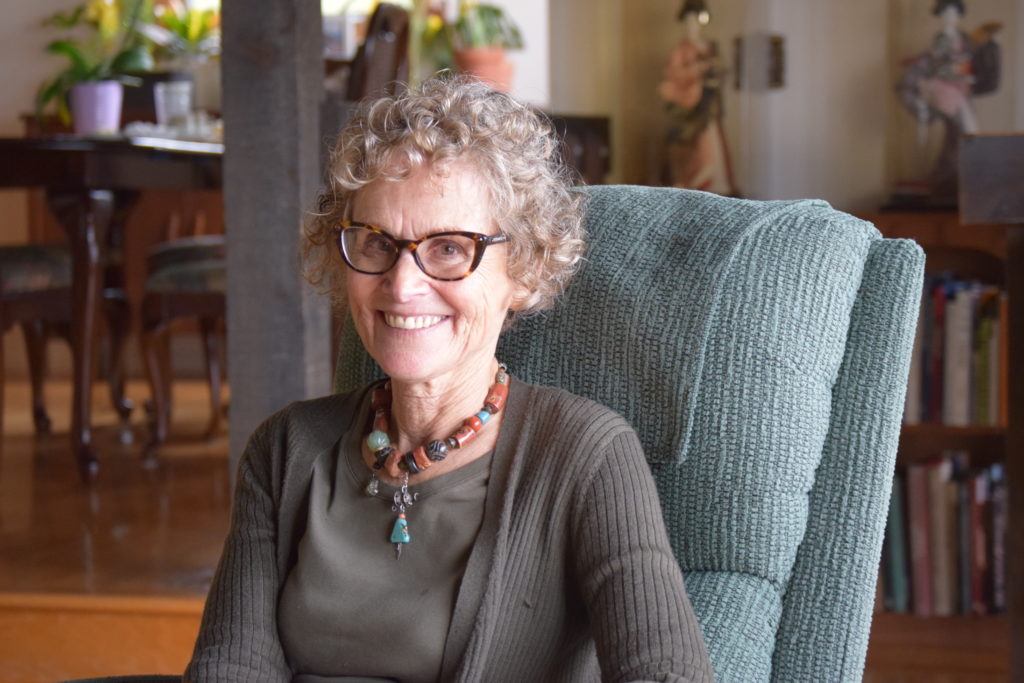 The opening of the PADA group show this evening coincides with the first anniversary of the passing of Herman’s husband’s, making the day doubly poignant. Despite his absence, however, the Art Center will owe a debt of gratitude to John Wessel for many years to come:

“I have established an endowment through the Palos Verdes Art Center for photo education,” Herman says. “That was John’s dying wish, to enable disadvantaged kids to be able to study at PVAC.” She was surprised, she adds, having thought that her husband would rather contribute to the Sierra Club or the PV Land Conservancy. 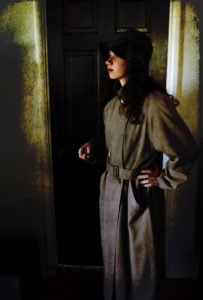 “I realize now that PADA meant a lot to him. He really enjoyed the camaraderie, learning different techniques and approaches to photography, and also he loved (Manhattan Beach artist) Jim Murray’s gallery visiting class. Even at the end, when he was very disabled, had brain cancer, he still wanted to be pushed in his wheelchair to to to those gallery visits.

“The education program will be starting up in September,” Herman continues. “It’s too expensive to bring the (middle school) students to PVAC, but they’re going to bring a teacher to low-income residents in Harbor City. I think that’s great. I think a camera can offer such an ability to express oneself.”

And to find oneself. The experience is bound to be memorable for the boys and girls who participate. It’s possible that for some of these youngsters their exposure to photography will engender a lifelong passion.

Of that which inspires

As for her own lifelong passions in the realm of art, Judy Herman recalls being taken by her mother to the Pasadena Art Museum at about the age of nine. “They were offering art classes for kids.” She mentions her enthusiastic and knowledgeable teacher, Lucille Krasne, still active in her mid-80s and teaching tango in New York City.

Also at the age of nine (“That must have been a great year,” she laughs), Herman went to Mexico for the first time, and this led to her interest in language and linguistics: “It was interesting, the commonalities and the differences in English and Spanish.” Later, she worked as a librarian for many years. “I like word origins. I had a blog about word origins for a while, and I wrote quite a few articles for Mental Floss.”

She’s written for other publications as well, including Peninsula People. 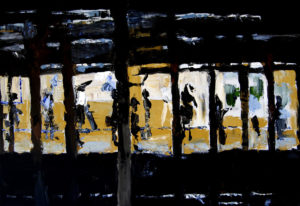 “Subway Rhythms,” by Judy Herman. The paint was slapped on quickly, but it closely resembles the photograph that inspired it

Herman seems to be someone with an enduring curiosity about the evolving art world. “Not all of it speaks to me,” she admits, “but I like seeing what people are doing (that’s) new, that I haven’t known about. That’s why I enjoy going on the gallery tours.” She mentions the sculptural work of Tim Hawkinson and Lee Ufan.

“The artists I enjoy the most are less representational, like [Robert] Rauschenberg. He threw a lot of weird stuff together but in a beautiful way and I actually think some of the older works from the ‘50s and early ‘60s have aged well. Some people think they’re too much of that era, but I like them, and I even like the way the newspaper has yellowed. 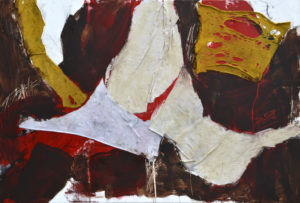 “Rags to Riches” (acrylic and cloth on canvas), by Judy Herman

“I like Matisse,” Herman continues. “Everybody loves him for his colors, but I like his drawings and etchings, this beautiful line work. And I like Picasso for the same reason; he really had a way with line. To me, drawing is all about the line; it’s not trying to build up volume, because that’s a kind of painting. I like paintings that are flat and patterned and not trying to create an illusion of the three-dimensional world, but just doing something with the color and pattern shape, whether they are based on something out there in the real world or just purely non-objective.”

It’s ideas and concepts like these that underlie Herman’s own work, and that take her from abstract painting to documentary photography and back again. What she’ll immerse herself in next is anyone’s guess, but we can surely count on it being worthy of our attention.

PADA, the Photographic and Digital Artists group, exhibits new work by 24 of its members beginning Thursday, July 6, with an opening reception from 6 to 9 p.m. at The Loft, 401 Mesa St., San Pedro. A second reception takes place on Saturday, July 15, from 4 to 7 p.m., and a third reception, again coinciding with San Pedro’s First Thursday Art Walk, is scheduled for August 3, from 6 to 9 p.m. To learn more, call Paul Blieden at (310) 418-3471. ER