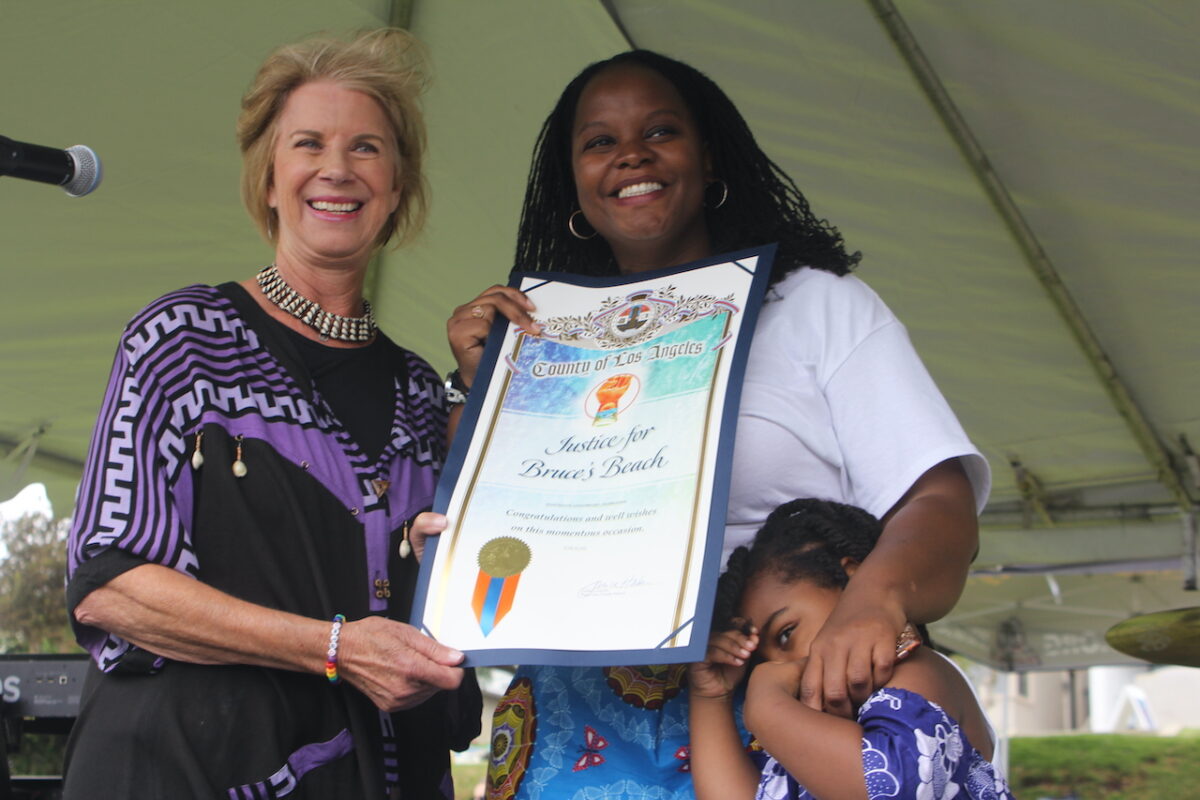 Kavon Ward, the founder of Justice for Bruce’s Beach, is recognized by Los Angeles County Supervisor Janice Hahn for her year of activism aimed at restoring the Bruce’s Beach land to the Bruce family. Photos by Nadia Bidarian

by Nadia Bidarian and Mark McDermott

Though Juneteenth celebrates the freeing of slaves in Texas in 1865, President Joe Biden declared the day a national holiday just last week. Kavon Ward, founder of Justice for Bruce’s Beach, organized Saturday’s celebration, which marked a momentous year since she launched her movement last Juneteenth at what was then a park with a little-known history.

Now, the story of how the City of Manhattan Beach took the property, a beach resort for African Americans, from Willa and Charles Bruce 100 years ago through a racially motivated act of eminent domain is nationally known. And now, through legislative efforts launched by Hahn and marshalled through the State Senate by Senators Steven Bradford and Ben Allen, Los Angeles County is on the cusp of returning the original parcels of land where the resort stood to descendents of the Bruces.

“When I heard the story through Kavon Ward, who has remained steadfast in bringing justice for Bruce’s Beach, I finally woke up,” Hahn said. “I woke. ‘You mean that property now belongs to the County of Los Angeles?’ And I will tell you, without hesitation, I said,’ There’s only one right thing to do…To give justice to the family, we’ve got to give that property back to the remaining descendants of the Bruce family. To begin to right a wrong, to begin to make amends.’”

Several Bruce family members were in the audience, likely the largest gathering of Bruces at the park since a family reunion in 2018, which garnered very little media attention. A few hundred people were there on Saturday, as well as newspaper and television news reporters. Hahn spoke directly to the Bruces.

“We will never make up for 100 years of injustice that your family has gone through. But it’s a start,” Hahn said. “And we are apparently the first governmental body in the United States to return stolen property to an African American family. And we are going to show the world that the sky is not going to fall down if we right a wrong…We are going to show the world this is how you do it —  you find a wrong and you begin to right it in your own corner of your world, your life, or your family. And the key to doing this, folks, is telling the truth.”

Bradford called this Juneteenth “a momentous day” and thanked Ward, Hahn, as well as all the other non-African Americans who he said had the courage to ally themselves with this cause.

“We’re here to show in a peaceful way that not only are we ready to celebrate Juneteenth, we’re here to give this property back,” said Bradford, who authored the bill that would give L.A. County the authority to return Bruce’s Beach to the Bruce family. “Bruce’s Beach will be an example of what reparations could look like here in the state of California.”

Allen, who co-authored the bill along with Assemblypersons Al Muratsuchi and Autumn Burke, said Bradford has long educated his colleagues in the Senate regarding Juneteenth. He expressed hope that the holiday would not be drained of its meaning, as Memorial Day so often is, becoming a time of barbecues rather than reflection.

“We have to make sure, as we make this a national holiday, as we make this something that all Americans start to become a part of, that this doesn’t just get taken over by corporate America with insipid commercial statements and signs, that we keep the heart of this holiday —  which is about resistance, about resolution, about freedom,” Allen said.

Former mayor Mitch Ward, who in a sense began the process when he successfully pushed to have the park renamed in honor of the Bruces 15 years ago, likened the city to a ship that must be safely steered through history. He said when he was mayor he was able to steer that ship just as far Bruce’s Beach.

“Now, that glorious ship has set sail again, but she’s stuck rudderless in front of Bruce’s Beach,” Ward said. “She’s stuck in the sand. She’s stuck on the rocks. She doesn’t know what to do, because there was a bad she did to this area in 1924. So, since we’re on the precipice of having a right done to a wrong…that glorious ship called the USS Manhattan Beach, it’s gonna once again pull up to the banks, and we’re gonna haul and bring a whole lot of Bruce’s on board. And I’m going to be the first to welcome all those Black people back to Manhattan Beach.”

Patricia Bruce spoke on behalf of her family and offered what was occurring at Bruce’s Beach as a sign of hope for anyone who faces obstacles in his or her life.

Bradford noted that so many of the people who are helping make history at Bruce’s Beach are Black women, including members of the Justice for Bruce’s Beach movement and historian Alison Rose Jefferson, who has worked for two decades to restore the memory of what happened to the Bruce family and the African American community that once thrived on the Manhattan Beach oceanfront. Kavon Ward said that many such women, including her mother, have also worked behind the scenes to make everything possible. She dedicated her poem, “Phenomenal Black Woman,” to those unsung heroes.

“She is your platform provider, organizer, your glass ceiling divider,” Ward said, in a powerful, booming voice. “She is a warrior, a nurturer, her spirit, it is virtuous. She is a winner, code switcher, a shade thrower to the naysayer….She is resilient, boundless, a phoenix perpetually rising from the ashes.”

Ward’s words recalled Willa Bruce, a Black woman who was the daughter of a woman who’d been enslaved. She purchased the land eventually named Bruce’s Beach back in 1912, going against the grain of her time and at least temporarily finding justice and peace in Manhattan Beach.

“There’s a bunch of Bruces’ spirits that for 100 years have been right here,” Hahn said. “It feels like we are on holy ground. And I am glad to be here today, because Juneteenth is about delayed justice.”