Saxophonist Kamasi Washington, fresh from Kendrick Lamar’s To Pimp a Butterfly, steps into the limelight 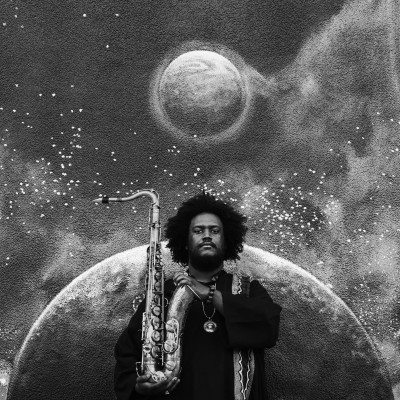 Kamasi Washington and his band will appear at Saint Rocke Wednesday night as part of Jam for Zane, a show honoring the late saxophonist Zane Musa. Photo by Mike Park

Kamasi Washington and his band will appear at Saint Rocke Wednesday night as part of Jam for Zane, a show honoring the late saxophonist Zane Musa. Photo by Mike Park

The first time Kamasi Washington had contact with a tenor saxophone, an alchemical reaction unfolded in his father’s rehearsal shack in Inglewood. Unlike the clarinet, which he had played for several years prior, the sax made his fingers fly. The 13-year-old just picked it up and his fingers knew what to do.

By his rap sheet alone, Washington’s talent is undeniable. As a college sophomore, he toured nationally with Snoop Dogg. His rich, unapologetic runs, which drill, color and strain with emotion, have since accompanied Mos Def, Quincy Jones, George Duke, Flying Lotus, and the list goes on.

Most recently, after showing his childhood friend and producer Terrace Martin a preview of the spirited jazz orchestral masterwork that is his upcoming album, Washington was tapped to lend his hand on Kendrick Lamar’s second studio album, To Pimp a Butterfly. Under a high security lockdown at a Santa Monica studio, Washington composed the string arrangements for the album on a piano, with Lamar watching him inquisitively.

In the past month, Lamar’s jazz-centric record has garnered Washington and other folks from the L.A. jazz crew worldwide attention. Hip hop has used jazz samples for a long time, but Lamar’s album brings the accompaniment to the front lines, his flow going head to head with a saxophone.

The lines that divide music into genres are imaginary, Washington says.

“[Lamar] shines so bright, it’s like, ‘Everybody, turn up, turn up,’” Washington says. “And that creates this beautiful thing where it’s like now they hear jazz because it’s not dimmed. Everything is turned up. It’s bright.”

For the first time ever in the 34-year-old’s musical career, one that’s spanned nearly two decades, Washington is officially releasing material under his own name. And he’s not taking it lightly. Aptly titled The Epic, his debut album is a 171-minute three-disk saga that epitomizes his liberated yet meticulous spirit, undoubtedly kindred to John Contrane’s, through the channel of new jazz throbbing in his hometown of Los Angeles.

Resurfacing after a yearlong delay, The Epic will be released under Flying Lotus’ Brainfeeder label on May 5, following a banger release show at the Regent Theater the prior night, where 36 performers — including his longstanding 10-piece band The Next Step/West Coast Get Down, Terrace Martin, DJ Battlecat, Miguel Atwood-Ferguson and a dozen orchestral and choir members — will interact, largely improvising the record.

“I don’t like to over-rehearse,” Washington says on a warm Sunday afternoon in the Inglewood studio, which is now his main spot. “I want it to be an experience. The more you rehearse, the more tired you get, the more restricted. You start looking at it as ‘how it’s gonna go’ as opposed to ‘how it could possibly go.’ I wanna keep the possibilities possible.”

It was that same boundless curiosity that planted the seed culminating in The Epic‘s novel sound some five years ago in the living room of the late jazz legend Gerald Wilson. As an instructor at UCLA, Wilson heard the young soft-spoken saxophonist (an ethnomusicology major with a focus on composition) and brought him into the Gerald Wilson Band, and the two fostered a close mentorship over the years.

That particular afternoon, they were showing each other new material they’d written. Washington played him a live recording with his band, complete with double drums, double bass and string synth on keyboard.

“And then we go hear this full orchestra playing Gerald Wilson’s music, and I was just like, wow, that’s the most beautiful thing I’ve ever heard,” Washington recalls. “At that point I thought it’d be cool to really add a string orchestra feel, the lush full sound of what that would be to what we did.”

The following year, Washington got a phone call from Brainfeeder about doing an album, so he called his bandmates. When he asked for a few days to record his songs, almost every one of them asked the same thing — each member of the band had material for a record. So the 10 blocked out the entire month of December in 2013, canceling and turning down gigs with the likes of Lauryn Hill, Stanley Clarke and Babyface. Twelve-hour days for a month at Kingsize Soundlab in Echo Park netted eight full albums, some 3 terabytes of tracks.

For Washington’s album, the band recorded 45 of his songs, drawn from the ether, as he explains it, amid breakups and other highs and lows over the years. He began narrowing the collection to fit the album. When he pared down to 17 tracks, he was listening to the collection so much that he began having a recurring dream — an elaborate tale about a group of children breaking the illusion of power — set to the charged sounds of those 17 songs.

The track order of The Epic came from the dream, Washington says, as well as his confidence that they all belonged together as one unit, even if it took three discs. Amid touring with Chaka Khan and Stanley Clarke, Washington composed the string and choir parts to the tracks, eventually recruiting an ensemble of 50 musicians to do the recordings. Then followed long, laborious stretch mixing the record.

“A lot of times in music people prioritize things,” Washington says, in deep thinking mode, as evidenced by the twirling of his mustache. “Like they’d want you to really be able to hear this, and the rest of the stuff is just undercurrent. But I wanted you to hear everything.”

“Trying to make 70 people simultaneously heard, it was a process — his computer didn’t like it either,” he says, adding with a laugh that bags of frozen peas did wonders to cool it down. 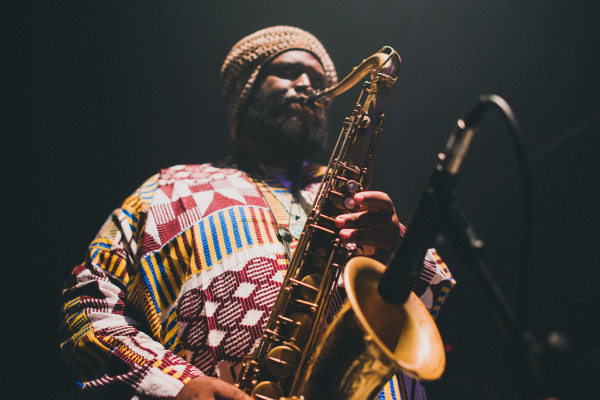 What’s in the future? The prolific musician has more than 40 new compositions backlogged, a majority of them written by hand on the piano. The band, who’s held a residency at Hollywood’s Piano Bar every Wednesday and Friday for the last four years, is talking about another studio lockout soon.

There will be a reunion of sorts at Saint Rocke next Wednesday night. Washington and the band is sharing the bill with Joe Firstman, a friend he first met a decade ago at Guy’s, the most happening jazz spot in L.A. at the time. Firstman, who was a bandleader between 2005 and 2009 on “Last Call with Carson Daly,” asked Washington to join the house band after hearing him play.

The musicians will honor the late saxophonist Zane Musa, a longtime L.A. staple and another house band member who suddenly passed away in February. Growing up, Washington says he looked up to Musa as a “man on the mountain top.”

The two played together in the Isaac Smith Band after high school, but it was during the Carson Daly shows that they bonded over their admiration for John Coltrane (uncannily they shared the same favorite album, song and solo), Street Fighter 2 and watching sports, not a common pastime among the musical contingent, Washington notes.

“He was so good so young,” Washington remembers. “The way he was good now, he was good like that when he was 16. He was the staple of LA, a hero on the saxophone.”