Käthe Kollwitz: War and other atrocities at the Getty Research Institute 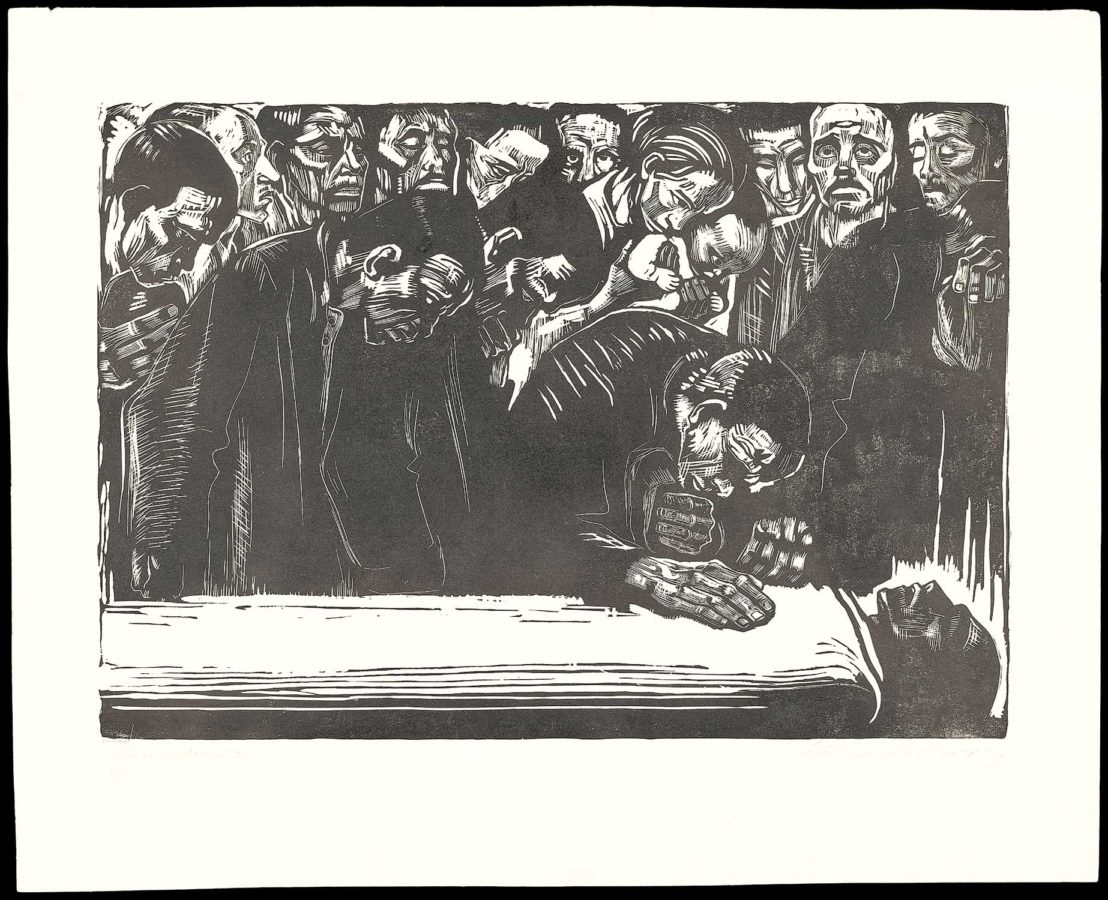 Käthe Kollwitz never saw the light. What I mean is that she lived through dark times, the German Empire, the Weimar Republic, and the Third Reich. Or, in bleaker terms, she was born just before the Franco-Prussian War, endured World War I and the economic-financial collapse that followed, and witnessed the devastation of her country during World War II. Her son, Peter, was killed on the battlefield in 1914, and her grandson, also named Peter, was killed in combat in 1942. Kollwitz herself, having left Berlin in 1943 after her home and its belongings were destroyed, spent her last days in Moritzburg, near devastated Dresden. She died in April, 1945, just 16 days before the war ended. 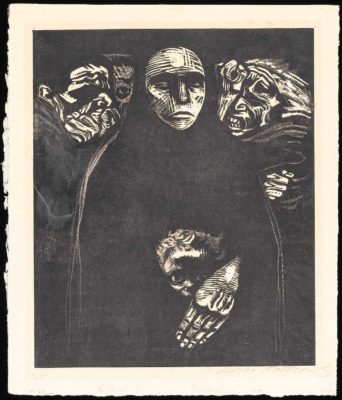 That’s more biographical information than you’ll find in “Käthe Kollwitz: Prints, Process, Politics,” which opened last week in the Getty Research Institute (the GRI), located in the Getty Center. You can see it now, you can see it later, because it’s on view through March 29. Just don’t go if you want some holiday cheer because Kollwitz’s work is some of the saddest and most forlorn imagery you’re likely to encounter. It makes Edvard Munch look like Boucher or Fragonard.

That said, referring to the many depictions of the downtrodden, Elfried Boch called the work the “artistic transfiguration of the life of the oppressed.”

Although the work is curated by Louis Marcheson, Christina Aube, and Naoko Takahatake, there wouldn’t be anything to look at if not for Dr. Richard A. Simms, who gifted his substantial collection of Kollwitz prints and drawings to the Getty in 2016.

Maybe you’re familiar with her, maybe not, but Kollwitz, who was born in 1867, isn’t an obscure figure and was in fact much appreciated during her lifetime. Contemporaneous with Germany’s Expressionists, such as Ernst Barlach, Ludwig Meidner, and Erich Heckel, her “palette” was broadened during trips to Paris in 1901 and 1904, where she encountered the works of Bonnard, Degas, Toulouse-Lautrec, and perhaps more significantly Eugène Carrière. At least we find some resonance with the latter’s deeply shadowed or shaded work.

Although mentioned only in passing, an artistic forebear of sorts would have to be Goya of the “Disasters of War.” But while Goya depicted impalements and mutilated corpses, Kollwitz focused on the before (“Sharpening the Scythe,” for example) or the mournful aftermath (“The Parents,” “The Widow,” “Woman with Child’s Coffin”).

But how is it that Kollwitz stands out, and apart from the above artists? 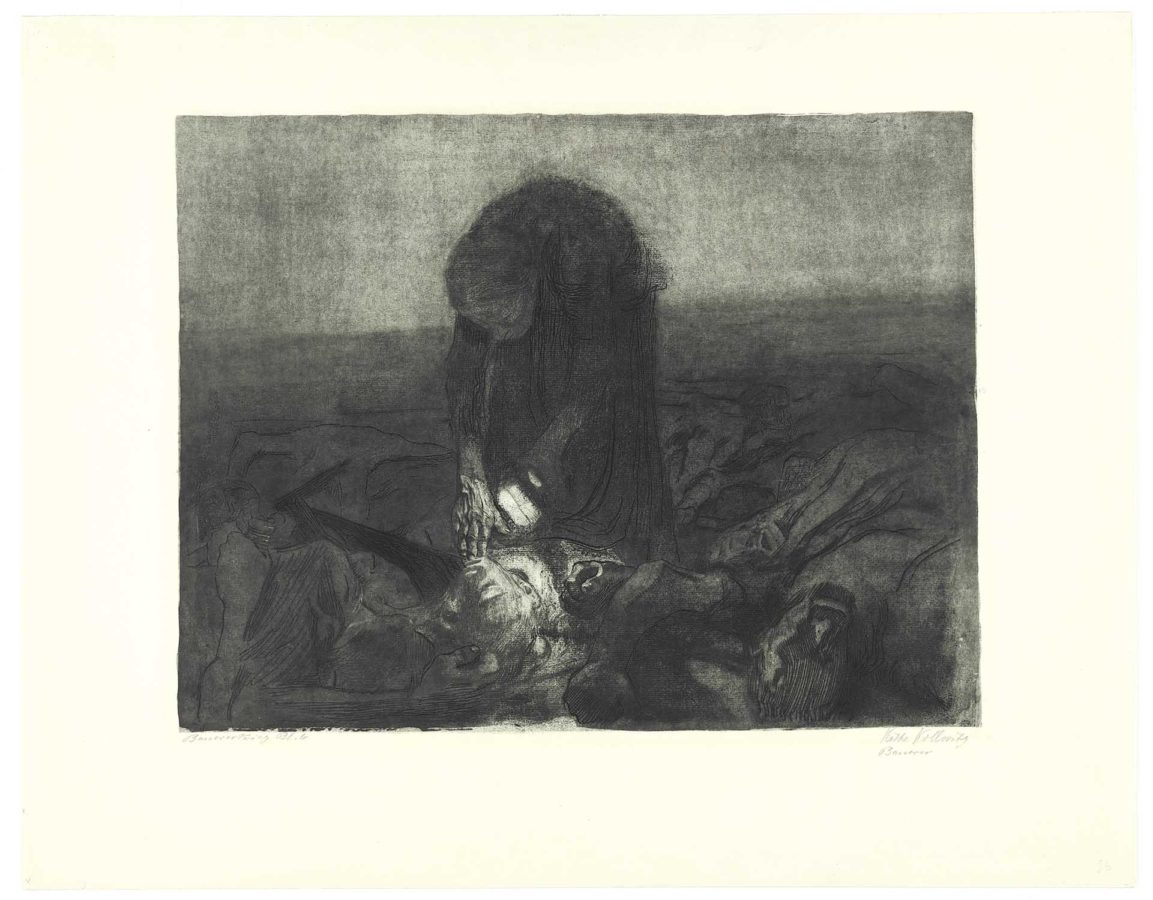 “It was the combination of her commitment to Socialist ideals, deep-rooted humanitarianism, artistic ambitions, and aesthetic intelligence that rendered her art distinctive from that of her peers,” as Marchesano notes in the catalog that accompanies the exhibition. As he also points out, this time in an essay co-authored with Natascha Kirchner, “If both collectors and communists could value Kollwitz’s work, it was perhaps because Kollwitz’s strategy to place equal premiums on artistic quality and clarity of message had paid off.” 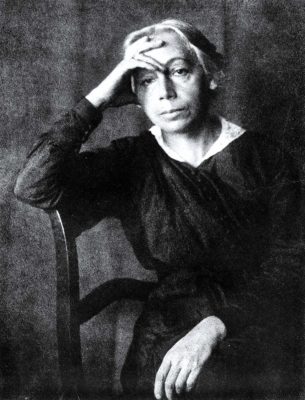 In her own words, replying to a letter from a Mrs. Müller, a fine arts instructor, Kollwitz stated that her “uppermost criterion is always the artistic quality,” and this applied to whatever she created, even throwaway leaflets.

Although there was considerable prejudice against women as artists in the late 19th and early 20th century (plus envy and jealousy when they were successful), Kollwitz was recognized for her talents early on. One crucial supporter was Max Lehrs, the director of the Kupfterstich-Kabinett in Dresden. He saw her expertise and was the first museum professional to collect not only her finished prints, but her proofs and rejected sheets.

In 1919, Kollwitz became the first woman ever to be elected to full membership in the Berlin Akademie der Künste, or the Berlin Academy of Art. She was, however, forced to resign in 1933 after the Nazis came to power.

I haven’t yet spoken about what’s at the heart of the show (how Kollwitz carried her vision from idea or sketch to finished work), nor have I mentioned specific work, which is defined by cycles and suites: “‘Cycle’ refers to a suite or set of prints with a narrative, such as ‘A Weavers’ Revolt.’ ‘Series’ refers to a suite dedicated to a theme, such as ‘War.’”

When the end product is so stunningly and even exquisitely executed, people tend to dwell on the result, the effect, without giving much thought to what led to it. This was common during the Postwar period and Cold War, no matter on which side of the Iron Curtain you happened to be.

“With a few important exceptions,” Marchesano and Kirchner write, “most critics on the left and right viewed her (Kollwitz’s) prints within a prescribed framework that focused on content at the expense of processes, techniques, and formal characteristics.” 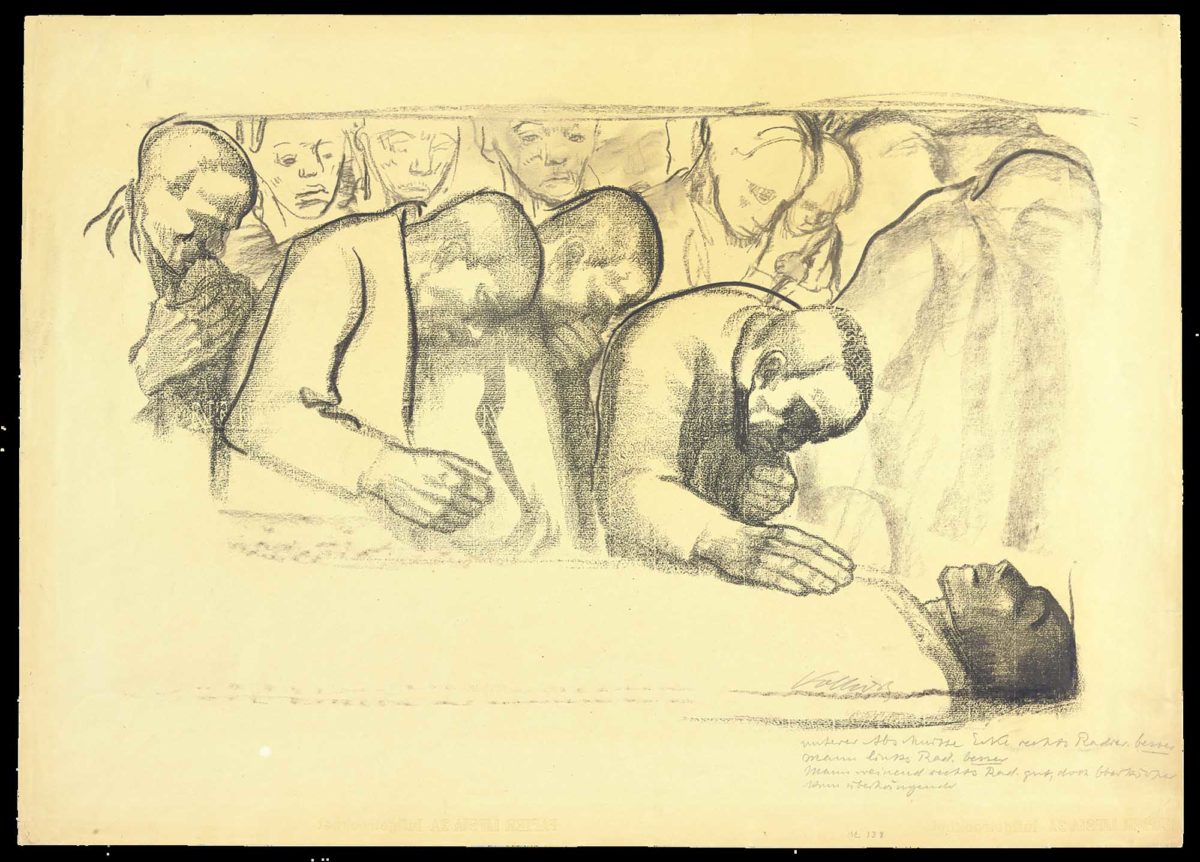 Not satisfied with a one-size-fits-all approach, Kollwitz investigated different media in her search to best represent and convey her subject. From the preparatory drawings we can follow the thought process that culminated with the finished etching, woodcut, or lithograph. Additionally, as Kirchner points out, “Her creative approach to the material and her constant exploration of color, paper, textiles, and tools, as well as her unconventional combinations of printmaking techniques, expanded her range of expression.”

Sometimes her images are stark in a new way when Kollwitz transitions from intaglio printing to woodcuts, or even from crayon and charcoal to woodcut as we witness the process leading to the final version of “In Memoriam Karl Liebknecht” (1920), which commemorates the slain leader of Germany’s Communist Party. She was appalled by his brutal assassination. What’s fascinating here are the rejected images, although for the most part they are key steps leading to the one result with which she was most satisfied.

Kollwitz did employ a limited amount of color, although more as tones than as distinct pure color: No one will mistake her for Matisse. In Kirchner’s words, “Anna Plehn, a friend and critic, claims that color for Kollwitz was in the end a mere detour from the essential, communicative power of black and white.” What interested her were the gradations between light and shadow. 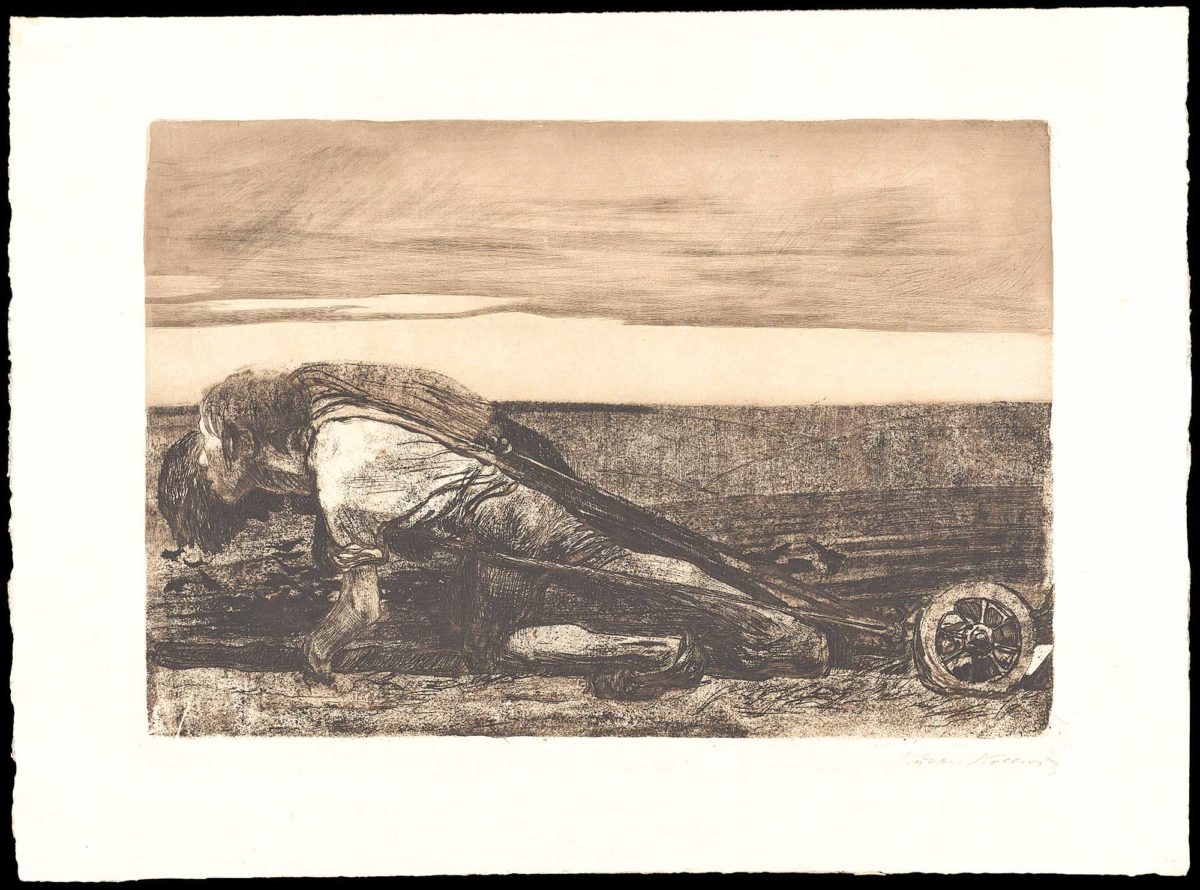 All of this is evident in “Peasants’ War” (1902-08), which “echoes the loathsome condition of industrial laborers in Germany around 1900,” writes Jay A. Clarke, “although the ostensible subject was from the Restoration.” Marchesano and Kirchner add that “The dramatic arc of Kollwitz’s seven-print cycle mirrors that of ‘A Weavers’ Revolt’ (from 1893-97): provocations, reaction, outbreak of violence, defeat, and death.”

The people in these images are the underdogs in every sense. And when, after suffering humiliation and deprivation without end, they do rise up, demanding to be treated better than animals, they are ruthlessly beaten down.

“There are several astonishing works in “Peasants’ War,” one of them being “Sharpening the Scythe,” in which an abused, exhausted woman is being worked up (in both senses) from initial concept to completion, during which Kollwitz makes subtle but key changes. The adjustments are often minor, but with each one the effect is sharpened and just to the point where we understand, with the faintest glimmer in her half opened eyes, that this woman has finally been pushed too far and will now act. 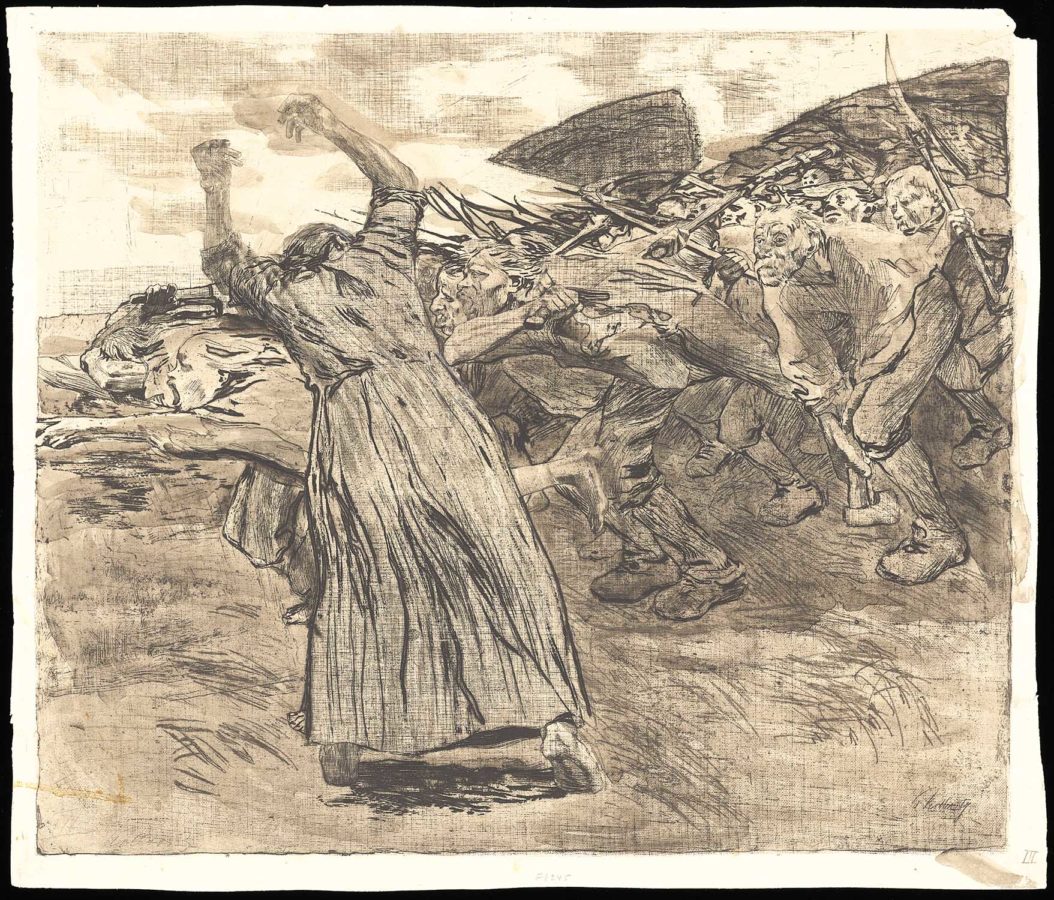 In this same series, “Charge” is perhaps Kollwitz’s best-known work, and the catalog’s authors even suggest that it may be her “most technically sophisticated print.” The emotional thrust and momentum is perfectly captured and conveyed.

Yes, the uprising will fail, but Kollwitz has ennobled those who stood up, giving them and their cause dignity and respect.

That during her lifetime Kollwitz was immersed in turbulent times is a great misfortune. The legacy of her work (and here through the generosity of Dr. Simms) is a reminder that there have been dark days throughout history, and that we must be vigilant in order to avoid falling into them again. It’s something to remember, and to think about, especially at this time of the year.