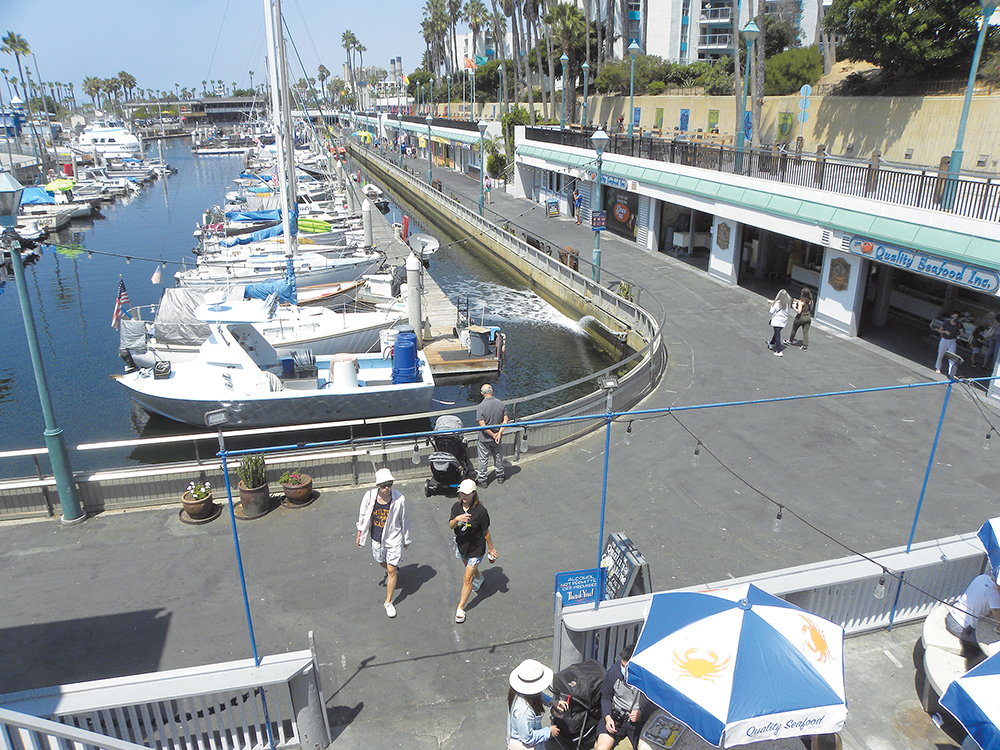 The International Boardwalk, seen Aug. 24, is one of the areas SWA Group will develop a plan for. Photo by Garth Meyer

A total of 120 residents weighed in with input last week at the first of three meetings on a King Harbor amenities plan.

Near the conclusion, a city consultant gave his reaction.

“Based on what I’m hearing, that it’s charming, it’s local…,” said SWA Group CEO Gerdo Aquino. “I think the best version of itself, just to improve upon what is already there. To build on that DNA for inspiration.”

Representatives of SWA — a Los Angeles landscape architecture firm hired by the city in September – asked questions, and the public answered on their keyboards during the virtual meeting Dec. 15.

Their answers bloomed on the screen in graphic form.

The Amenities Plan focuses on Moonstone Park, Seaside Lagoon, the sportfishing pier, a small boat/hand launch, the International Boardwalk and finding a location for a public boat launch. The full plan is scheduled for completion by April 2022.

The first amenity addressed was Moonstone Park, a square patch of grass adjacent to the Lanakila Outrigger Club storage area, and the Harbor Patrol office.

What to add to it?

“Something usable, I don’t ever go there,” the answers began.

“Love the idea of an amphitheater.”

“Definitely not boat storage — what a waste.”

Next was Seaside Lagoon. What improvements would you like to see?

“Take down the fences.”

“Stop polluting the ocean with this cesspool.”

How to improve the small boat launch?

“Closer to the parking lot.”

“Upgrade so homeless don’t hang around.”

The next subject was the now-closed sportfishing pier, which brought a ranking of priorities, including 1. benches, fire pits, public outdoor features, 2. restaurants or other commercial activities, and  3. floating dock for hand launch.

The last major subject was the International Boardwalk.

“It only really needs to be cleaned up.”

“Take out half the slips.”

“Local, mom and pop shops only.”

SWA then asked about a public boat launch and dinghy dock, which do not exist now.

Comments were also gathered about the harbor’s walking path, trees, then signage and lighting.

SWA noted that the plans will incorporate a projected sea level rise by 2030.

Overall safety concerns at the waterfront were asked about.

Then a question about what is missing from King Harbor and what is your favorite thing about the harbor?

“We have an actual, working harbor.”

“It’s not too pretentious.”

“Our goal,” Stephen Proud, Redondo Beach waterfront and economic development director, said is to have the right amenities in the right locations. “We don’t have the money to do all this on our own.”

He indicated grant money would be sought.

Proud added a comment about getting the word out.

“I’ve never been to a meeting in my professional career where someone didn’t say we haven’t done enough outreach,” he added.  “We came into this wanting citizen-based (input). I found it highly productive. We realize 120 people is a very small portion of the community that’s out there, but I’m super-thrilled with 120.”

Public input on the harbor plan may be submitted through Jan. 4 at KHAmenitiesPlan.com. ER