If Minnesota Timberwolves all-star Kevin Love hopes to get seeded in the upcoming Jose Cuervo Manhattan Beach Open, he’ll need to find a top ranked partner. Otherwise, he’ll be entered in the single elimination qualifier round with other Manhattan Open hopefuls, Dave Williams of USA Volleyball said Tuesday. USA Volleyball, in partnership with IMG, is producing the August 26-28 event at the Manhattan Beach pier.

The Associated Press reported on Tuesday that Love was training for the Manhattan Beach Open on a sand court set up in New York’s Times Square. “More than anything, I’m just going to be having fun with it, playing as much as I can up to that point and just working on my craft,” Love told AP.

“I have always been a fan of beach volleyball and when I received the opportunity to play in the Jose Cuervo Pro Beach Volleyball Series, I knew I wanted to be a part of it,” Love said.  “I’m tall, I’m quick, I can jump, and I’ve spent some time playing beach volleyball during my time in Los Angeles. Now that I have to start thinking about a backup plan with the basketball lockout, I thought ‘why not?’” 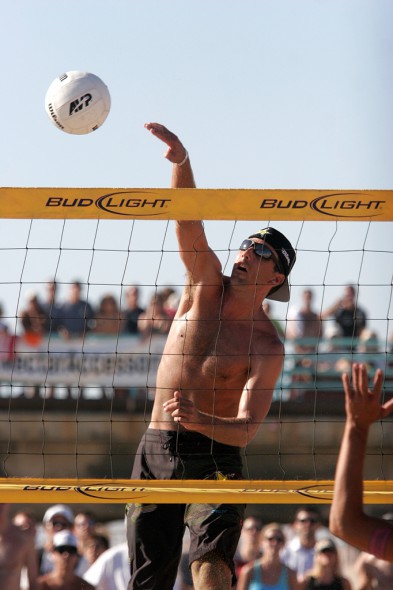 Love will have to out jump players such as Redondo's Sean Rosenthal if he hopes to be competitive. Rosenthal won the MB Open in 2009 and 2010. Photo by Ray Vidal

Love’s uncle Mike was a member of the Beach Boys. He was born  in Santa Monica and starred at UCLA.

But Love’s success on the basketball court may not transfer easily to the sand, Williams noted.

“A few years ago the Miami Heat’s Rony Saikley entered an AVP event in Florida and found himself huffing and puffing on his way to losing in the first round. But he had such a great time he hung around for the rest of the weekend,” Williams said.

Other NBA players have had success in the sand. San Antonio’s Brent Barry, who lives in Hermosa Beach and Laker Luke Walton, who lives in Manhattan Beach, are both highly regarded beach volleyball players.

Of the 68 teams who will play in the Thursday Manhattan Open qualifier, 16 will advance to the double elimination main event. Another 48 teams will be seeded in the tournament, which offers $200,000 in prize money. The men’s and women’s winners will be recognized with bronze plaques on the Manhattan Beach Pier Volleyball Walk of Fame.