Kids at the  forefront of SB Eco Fest 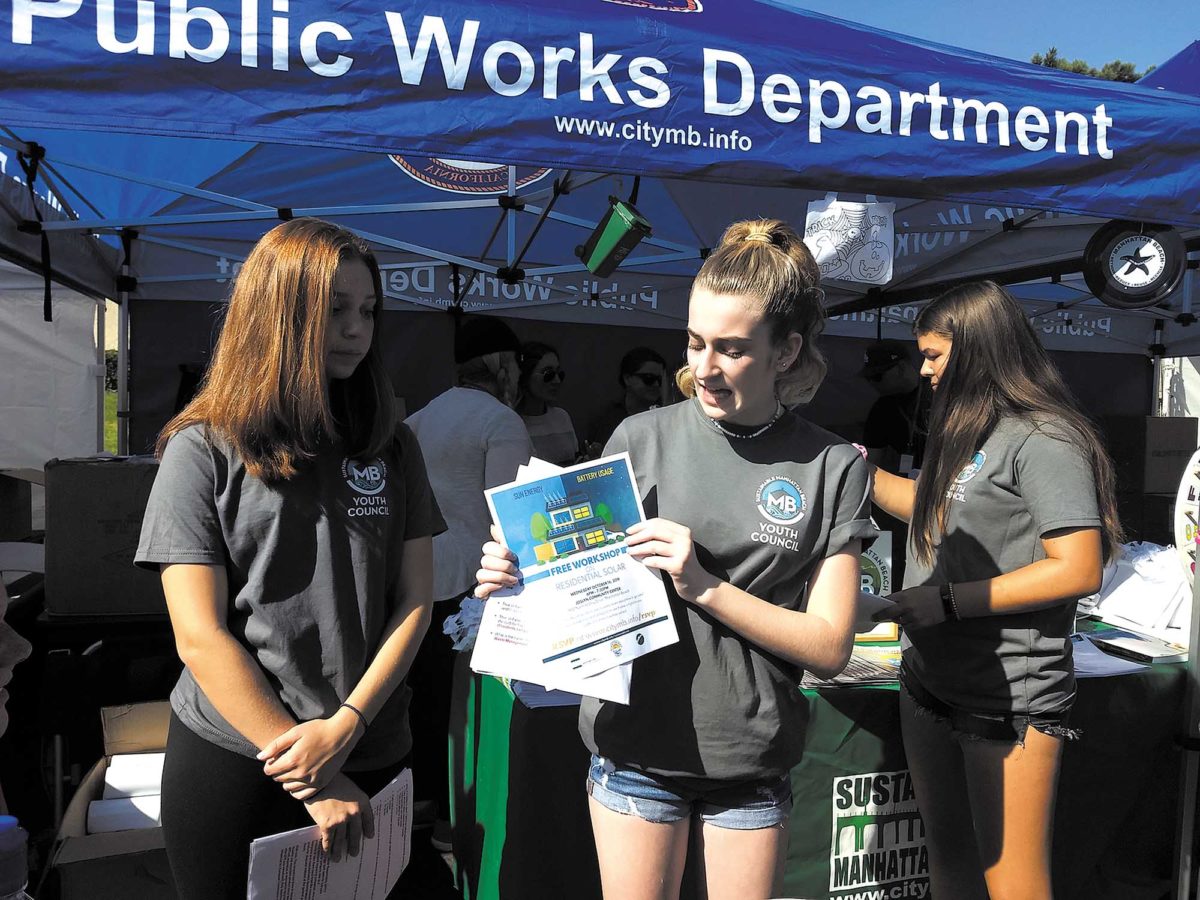 Next month’s South Bay Eco Festival will feature businesses that provide products that are good for the environment, groups whose mission is to promote environmental sustainability and stewardship, and resources for anyone who is trying to live more lightly upon the Earth. And while the event is squarely aimed at reaching the entire South Bay populace, the festival has invited local youth to play a special role: to help lead adults into better environmental practices.

Members of the Manhattan Beach Youth Sustainability Task Force are a key part of the Eco Festival’s organization. On the day of the event, which takes place April 25 from 11 a.m. to 3 p.m. at Metlox Plaza, kids from the task force will both have a booth and help emcee the festival. Additionally, the festival is inviting submissions from other young South Bay environmental activists by soliciting ideas for another interactive or educational booth about an environmental issue or solution. Kids who submit the winning idea by March 16 will receive a free booth and pop-up tent at the Eco Fest.

Eco Festival chair Sharon Cohen organized the festival to celebrate the 50th anniversary of Earth Day. Then, as now, society was being led to a fuller understanding of human’s heavy impact upon the Earth by its youngest members.

“Youth has always been the segment of society that brings about change,” said Cohen. “And if you are talking about the future of the planet, the youth right now have a right to be very angry, because the adults have not been very responsible. That’s why it’s so important to get youth out there and get them involved. In the end, they are the ones who are going to be leading us forward.”

The anger of a young generation frustrated by the inaction of older generations was crystallized by climate activist Greta Thunberg, whose speech last September at the UN Climate Action Conference in New York served as a clarion call for action.

“You have stolen my dreams and my childhood with your empty words,” said Thunberg, who was later named Time Magazine’s Person of the Year. “And yet I’m one of the lucky ones. People are suffering. People are dying. Entire ecosystems are collapsing. We are in the beginning of a mass extinction, and all you can talk about is money and fairy tales of eternal economic growth. How dare you!… We will not let you get away with this. Right here, right now is where we draw the line. The world is waking up. And change is coming, whether you like it or not.”

Emma Clarke, a junior at Mira Costa High School and a member of the Youth Sustainability Task Force, said that change is occurring within her peer group and reaching down to the elementary school level.

“I definitely think there is more awareness, in general,” Clarke said. “I was always that girl in elementary school who sorted trash for composting at lunch.”

Rather than being fueled by anger, Clarke said, kids are finding ways to make sustainability fun. Reusable water bottles are a hip accessory, for examples, and Mira Costa has new water filling stations driven by students’ desire to stop using plastic bottles. Clarke and her friends reject the “fast fashion” industry, which by some measures accounts for 10 percent of global carbon emissions, and have embraced “upcycling,” which not only reuses but stylizes discarded clothes. There are apps for the practice, such as Poshmark, but it’s also just about heading out to local thrift stores.

“All my friends are huge thrifters,” Clarke said. “Like that’s a weekend outing. It’s cool to be a thrifter.”

One of Clarke’s friends, Samantha Torres, is organizing an ocean cleanup event in which participants will paddleboard together. The whole idea is that environmentalism won’t take hold if it’s all doom and gloom.

“Keeping it positive and keeping it on the lighter side is kind of cool,” Clarke said. “It can get really negative at times….Being environmentally friendly isn’t some big thing. It’s just a habit.”

Allie Bussjaeger, a member of the city’s Sustainability Task Force who works closely with the youth task force, said the younger generation has something to teach the older generations.

“Kids keep it simple and real,” Bussjaeger said. “It’s just the right thing to do, not a matter of policy and money. They know these things matter, but at root, it’s simple and authentic…They see environmentalism not as living without, but as a form of abundance, living with the Earth. A lot of previous generations have taught you have to live without. I think Manhattan Beach youth don’t see it that way. They see it as an opportunity. They are more resourceful, more careful, and they look with eyes of abundance, not eyes of lack. It’s just looking at it positively, living in harmony with the earth, and really having fun doing it.”

Fittingly the South Bay Eco Festival will be mainly about fun. The event, presented by South Bay Cares in partnership with the City of Manhattan Beach, will feature live music by Latch Key Kid, The Lucky Ones, and Jack Tracy. Attendees will be able to shop for green products and services, such as solar power, hydroponic gardening towers, sustainable fashion, imperfect foods, and electric cars. Environmental groups Heal the Bay, Sustainable Surf, Los Angeles Water Keepers and the Roundhouse Aquarium will host interactive and educational booths. All totaled there will be 46 vendors, half businesses and half organizations. The whole idea, Cohen said, is to experience a green future, and to have fun doing so.

“It’s literally a place for people to go and learn and get activated,” Cohen said, “so we can all participate in more of a green lifestyle.”

The South Bay Eco Festival is April 25 from 11 a.m. to 3 p.m. at the Metlox Plaza. For more information, see SouthBayEcoFestival.org. For youth who would like to submit ideas for an informational booth, email info@southbayecofestival.org