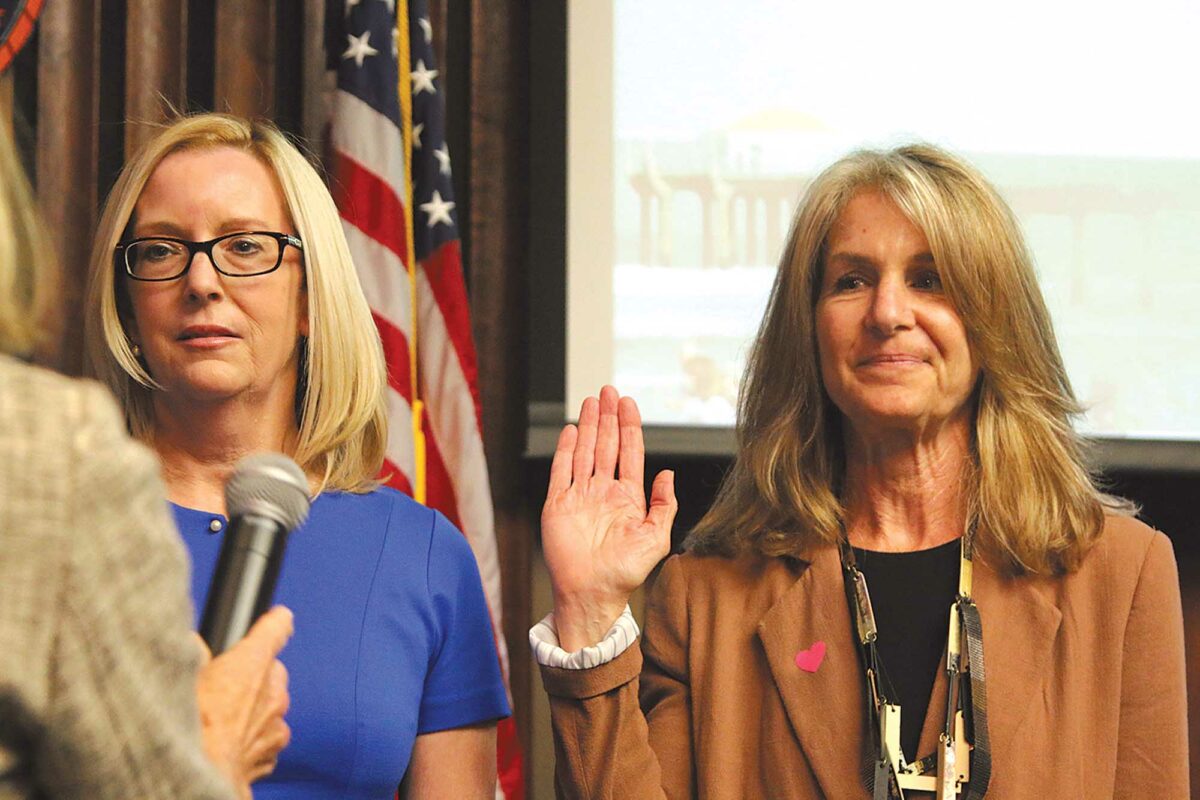 Suzanne Hadley, left, and Hildy Stern are sworn in as council members in 2019. The two have clashed over issues of decorum. Photo by Mark McDermott

The Manhattan Beach City Council is considering cutting Mayor Hildy Stern’s ceremonial recognitions from the regular 6 p.m. meetings in an attempt to shorten meetings. The proposal under consideration, which appears to have the support of a council majority, is to conduct these ceremonial items prior to the regular meeting’s start time.

The issue was discussed by the council last month and will likely be voted on in early February. It was placed on the December 7 meeting agenda by Councilpersons Suzanne Hadley and Joe Franklin.

At the outset of that discussion, Hadley suggested that either a time restriction be placed on ceremonial items or that they be moved to an earlier time without full council attendance. Hadley spoke directly to Stern, who upon taking the gavel as mayor in September launched a “Kindness Initiative,” a ceremonial recognition of residents within the community who have acted to help others.

“I’m all about mayoral privilege,” Hadley said. “But to be honest, your honor, I’m just finding —  not tonight, but prior meetings —  ceremonial items have stretched as long as 45 minutes, which does concern me, both for your respect for your colleagues’ time but also respecting the public’s time, who in good faith plug into the meetings and expect to get to public comment or their agenda items in a timely fashion.”

Mayor pro tem Steve Napolitano, who has served as mayor five times, more than anyone in the history of Manhattan Beach, argued emphatically against Hadley’s suggestions, describing them as “entirely unnecessary.” He said that meetings go long for a variety of reasons, including councilmembers’ own tendencies to speak at length.

“I don’t even know why this is on the agenda,” Napolitano said. “I don’t know it can’t be an email to Mayor Stern saying, ‘Hey, you know what, that was a really long ceremonial calendar. Can we just speed things up, and you cut people off if necessary?’ And I think that’s all this conversation takes because, you know, if we’re going to do history, let’s also look at the history of our own pontificating…I’ve caught some discussions here with some of ourselves as 15 minutes dissertations on things. So we’re all waiting for how long the meetings take, and we all need to own that. Sometimes we talk about things and we go on way beyond the need to, when something’s already been decided.”

Council meetings are scheduled to run from 6 p.m. to 10:30 p.m., and require a vote to continue beyond that point. The Council frequently goes beyond 10:30 p.m., which is problematic in a number of ways —  but perhaps most critically, public involvement tends to decrease the later the meeting runs. The State of California has some of the strictest laws in the nation aimed at transparency in public meetings, particularly the Brown Act, which among other things dictates that a council quorum — in Manhattan Beach’s case, three councilmembers — cannot communicate on any issue outside of public meetings. But late night meetings represent a black hole in the Brown Act, because many members of the public are unable or unwilling to stay up. As a result, some agenda items might not receive the public input they otherwise would.

The Manhattan Beach City Council has grappled with several issues over the last few years that attracted voluminous public input, particularly its consideration of issuing an apology, or otherwise recognizing the troubled racial history behind Bruce’s Beach park, as well as the ongoing debate about the use of public right of way for outdoor dining during the pandemic. Discussions often include one to two hours of public input for such items. But as Napolitano noted, councilmembers also tend to speak at length when passions are fired up. Hadley and Franklin, in particular, have given long explanations for their stances on Bruce’s Beach; the “dissertation” Napolitano referenced was most likely a 14 minute speech Franklin delivered late into the Bruce’s Beach discussion last March, on the night a Council majority rejected issuing an apology. But even somewhat more quotidian matters — such as the December 7 consideration of how to light the Manhattan Pier, or a discussion of a possible Cannabis initiative that would make it harder for cities to prevent dispensaries — tend to take up an hour or more, even if a policy outcome is not in sight. This is not unusual. Many city councils tend to suffer a sort of attention deficit disorder in reverse, losing themselves in long discussions, which often become less coherent the longer the meeting goes on.

Hadley said her main concern was a diminishment of public input.

“It disturbs me tonight that we cut public comment to two minutes instead of three,” Hadley said. “So on the one hand, speeding up the meetings, that’s great. But the time to suck out of the meetings is not from the public. It should be out of other areas, and each other.”

Hadley and Franklin found the third vote necessary to consider changing ceremonial items. Councilperson Richard Montgomery said that when he was mayor he once had 11 ceremonial items, and recalled that an earlier council he served on moved those recognitions to before the regular meeting.

“I’m willing to look at the earlier, side-type of ceremonial,” Montgomery said.

Napolitano said it was simply a matter of managing each meeting as it happens.

“It’s a matter of controlling the meeting,” he said. “And this is Mayor Stern’s fourth or fifth meeting. She’s learning. She’s doing a great job. Let’s let her continue on….We are all big kids and we can talk to each other and sort it out.”

“We sit in the agendized meetings, and we look at the time, and we adjust those meetings so that the meetings do not go long,” she said. “I do that as well. Councilmember Hadley, you did that too when you were a mayor.”

Stern and Hadley share a backstory. They are political opposites who were both elected to council in 2019. At the time, each was new to elected office, and both face reelection later this year should they choose to run again. Just before Hadley’s nine-month rotation as mayor began in December 2020, Stern placed an item on the agenda to discuss possibly skipping Hadley’s turn as mayor, due to controversial statements she’d made earlier that year, as the pandemic was beginning to unfold. Hadley argued in support of opening businesses and schools in defiance of COVID-19 guidelines, and eventually made a national television appearance.  Standing on the Manhattan Beach pier, she suggested to an MSNBC reporter that many COVID-19 restrictions were pointless.

“This is not the plague,” Hadley said. “I don’t know anybody who has died; maybe you do. We can’t prevent drunk driving by banning alcohol. We can’t prevent car fatalities on the highway by closing our highways and preventing cars. The role of society is not to prevent death.”

At the time of the mayoral rotation, Stern said that the council received so much public outcry regarding Hadley’s outspokenness that discussing the mayoral rotation was simply an act of responsive due diligence. In the end, Stern and the rest of the council voted unanimously to continue the mayoral rotation as scheduled, and Hadley served as mayor relatively routinely —  she did not defy public health orders, and her own ceremonial initiative recognized young entrepreneurs.

Stern’s Kindness Initiative has only run particularly long once, when outgoing Chamber of Commerce CEO Kelly Stroman was recognized and several people weighed in to offer words of appreciation. Stroman, a popular figure within the community, would likely have been recognized regardless of the initiative. Others recognized have included a neighborhood that provided meals to the police and fire departments early in the pandemic, and a local family who helped raise $500,000 to support local, small businesses likewise challenged by the pandemic. Most of the recognitions have run between 10 and 15 minutes.

Napolitano said the whole point of public recognition is that it occurs within the full public spotlight.

“I think you’ll find that we’re denying people who we are recognizing the full attention of Council and the public,” Napolitano said. “Because the vast majority of people aren’t going to tune in at 5:30 p.m…It cheapens it.”

The Council is tentatively scheduled to revisit the matter on February 1. ER