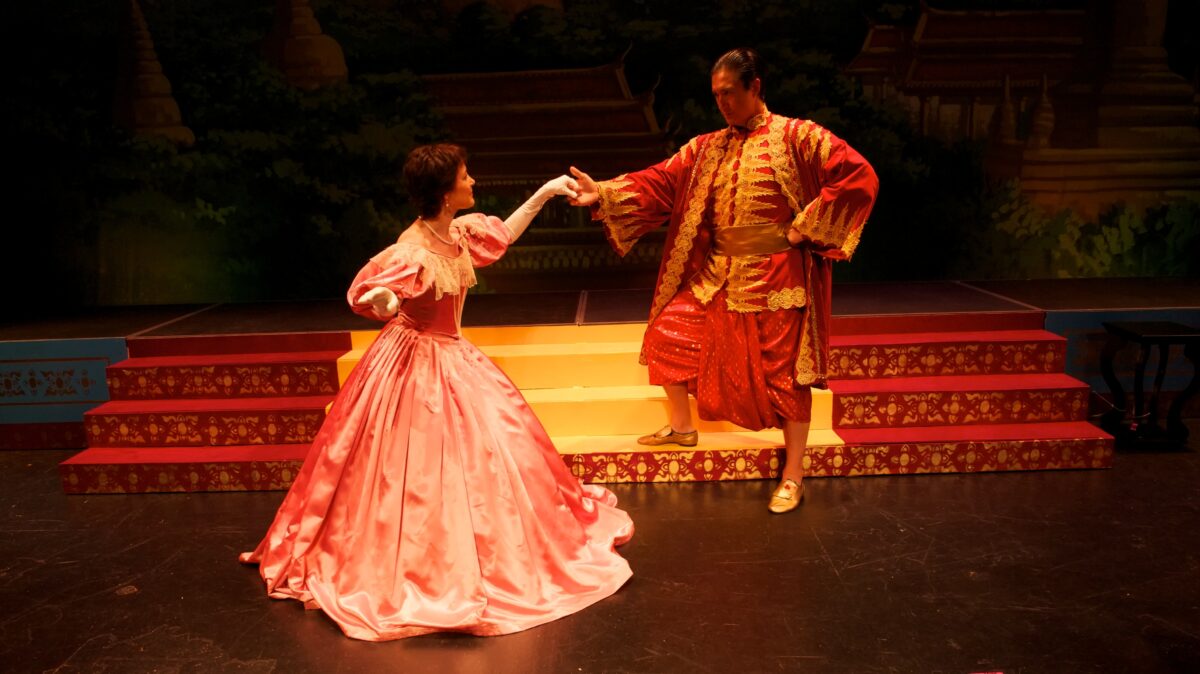 Cathryn Starr as Anna Leonowens and Ron Banks as The King of Siam. Photo by Kris Maine 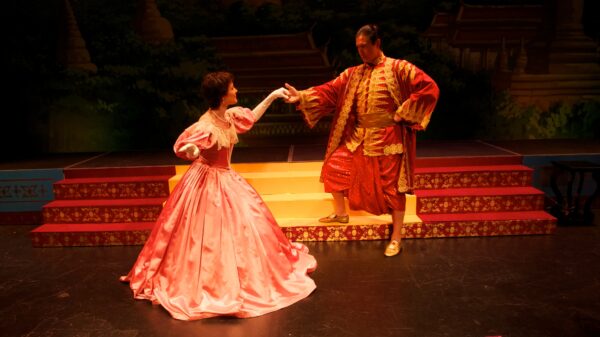 Cathryn Starr as Anna Leonowens and Ron Banks as The King of Siam. Photo by Kris Maine

Those who believe that the popular Tony Award-winning musical “The King and I” can only be seen in prestigious Broadway shows are in for a treat. Presented by The Aerospace Players, Rodgers and Hammerstein’s musical opens tomorrow for two weekends and six evening performances at the James Armstrong Theatre in Torrance.

Based on Margaret Landon’s novel Anna and the King of Siam (1944), “The King and I” tells the story of Anna Leonowens, a British governess appointed by the King of Siam to help him modernize his country by tutoring his children. The idea of turning Landon’s work into musical belonged to a theatrical attorney named Fanny Holtzmann, who persuaded Richard Rodgers (music) and Oscar Hammerstein II (book and lyrics) to help write the piece for one of her clients. The role of Anna was first performed by Gertrude Lawrence, the client whom Holtzmann was helping, and Yul Brynner was the first King of Siam.

The musical adaptation revolves around the push-and-pull relationship between Anna and the King. Although they both have their fair share of differences, their relationship starts to grow and gain strength as the two begin to comprehend, respect, and ultimately appreciate one another.

The musical premiered on March 29, 1951 at the St. James Theatre in New York. It was an instant hit, running for about three years and inspiring touring productions. Not only was “The King and I” a success during its earliest years, it became one of the longest running musicals in Broadway history.

Despite the fact that there have been many adaptations of the work, the actors in The Aerospace Players performance are confident that audiences will enjoy their take on it. Even those who have seen this classic musical elsewhere should not be so quick to write it off.

Ron Banks, who plays the King of Siam, has performed this role over 500 times, and yet he believes that each production is distinctive in its own way.

“I have seen and done many performances of ‘The King and I’”, Banks says, “and I feel the uniqueness of any production stems from the individuality of the actors in the production and the vision of the director. Our production is marked by the enthusiasm of the director, music director, choreographer and performers, to tell this compelling story of what happens when two very different cultures converge.”

Since he has taken on the role of the King of Siam in three national tours and many provincial productions, Banks acknowledges that some audience members might notice that his rendition of the king differs from others they have seen.

“American audiences’ ideas of Mongkut have been heavily influenced by Yul Brynner’s dominating and colorful (if not entirely accurate) interpretation,” Banks says. “For instance, many still believe that the King of Siam was bald and expect the actor portraying him to shave his head. Mongkut, in fact, had a full head of black (wavy) hair and that is how I choose to portray him. Brynner shaved his head because he was going bald, not because the King was bald. In many productions you will see a bald actor playing Mongkut surrounded by ensemble men portraying Buddhist monks with full heads of hair. This is exactly backwards to reality in Siam. King Mongkut had hair and Buddhist monks still traditionally shave their heads.”

The King of Siam is a very layered and intricate character, but he’s not the only noteworthy character in this musical. Many people are captivated by Anna’s compelling strengths, and the role of Anna is being played by Cathryn Starr. Starr is no stranger to the stage, having performed in musical theater, operetta, and also a few operas in California and Massachusetts. Despite the fact that she has portrayed many different characters across the stage, Starr is excited to portray the governess.

“Anna is a strong, independent woman trying to support herself and her young son in a time when there were not many choices for women on their own,” Starr explains. “She has a spirit of adventure (she would have to, if she’s traveled to Siam to teach the royal children) and also a very compassionate nature. I love her strong sense of right and wrong combined with the ability to look beyond her Victorian sensibilities to try to adapt to the very different culture of her hosts.” 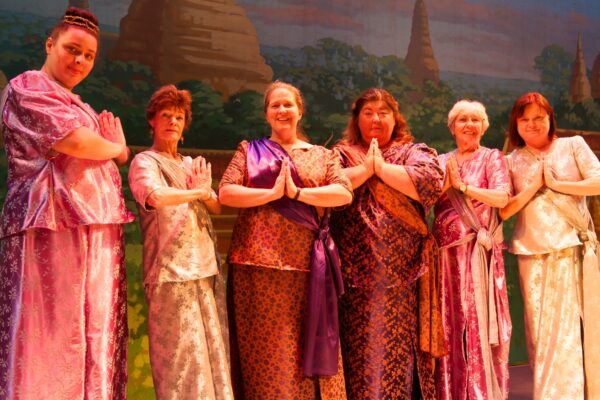 A few of the many wives of The King of Siam. Photo by Kris Maine

Starr is not the only performer who gets to take on a role of an independent and strong woman. Keiko Clark, a native of Japan who teaches private voice lessons and sings with different opera companies in Los Angeles, plays the flamboyant Tup Tim.

“I love playing the role of Tup Tim,” Clark says. “She is like Mulan. Her strength shows when she bursts out and says “I am not a spy!” in front of the King! Yeks! She is a slave with knowledge and courage. Although the kingdom of Siam was not ready for her way of thinking, she was not afraid to show what she believes in. She pursues her true love.”

Aside from the excitement of taking on such a fun character, Clark is also mesmerized by the music in the play:

“I think the music is beautiful and the two duets with Lun Tha, ‘We Kiss In A Shadow’ and ‘I Have Dreamed’ are [both] gorgeous.”

Stephen Cathers, who plays Lun Tha, is a software developer at The Aerospace Corporation with a love for singing and performing. He concurs with Clark, his co-star:

“My favorite part is definitely the two beautiful duets, “We Kiss In A Shadow” and “I Have Dreamed” [that Lun Tha] sings with Tuptim. It’s not a huge role, but he gets some of the best songs in the show.”

Cathers’ character Lun Tha is a representative from Burma who presents Tuptim as a “present” to the King of Siam. However, he starts to fall for her in spite of himself.

Love is quite a heavy theme in this musical, and those who root for the King of Siam and Anna will be pleased to know that the actors who take on these roles are lovers off the stage as well.

“I am thrilled to be working with my husband Ron again,” Starr says. “The last time we played opposite each other was in the TAP production of “Kiss Me, Kate” – as Lily and Frank. That was a blast!”

Tickets for this production are moderately priced. According to Clark and Cathers, audiences are definitely getting the better end of the deal here.

“You can pay $100 to see the show on Broadway,” Clark says, “but when you can see it for $22 with the great talents in the community, which would you choose?”

“This is a great chance to see a true musical theater classic,” adds Cathers. “This is definitely one for the whole family. There’s something for every age group to enjoy. We’ve got a great cast in a great theater with a full orchestra doing a show that’s been pleasing audiences for decades. Our King gives a mesmerizingly good performance – I’m tempted to sneak out into the theater and watch him when I’m not on stage.”