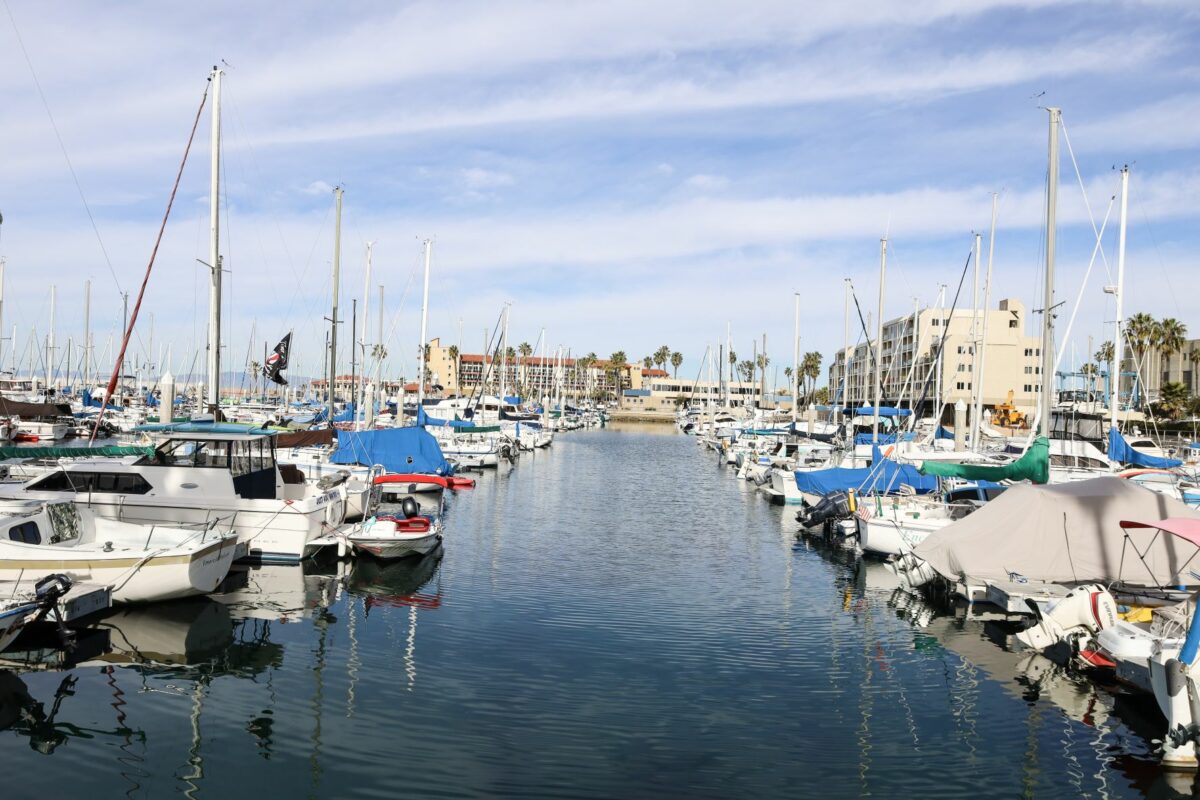 Joe Czuleger lived one heck of a life during his 95 years as a Redondo Beach resident.

A new policy has been announced for liveaboard boaters in King Harbor, at a cost of $125 per slip per month.

A Dec. 21 letter from marina general manager Mike Aaker also calls for all boats to be able to move under their own power, and be kept clear of errant items on decks and docks.

The letter goes on to state that lessee Majestic KHM intends to “eventually make King Harbor a non-liveaboard, recreation-only marina.”

Majestic is owned by Dr. Allen Ginsberg. The company took control of King Harbor Marina in 2020 after previous leaseholders The Guthrie family had it for 51 years.

“They’re trying to embark on a bit of a marina clean-up, which is generally positive,” said City Manager Mike Witzansky.

The new development follows a November eviction threat for the 63 liveaboards, brought on by the marina’s pending five-year renewal of a California Clean Marina Designation, and a suggestion of leaking sewage into its waters.

“We’re trying to deal with the issues first without doing anything drastic,” Aaker said. “We need to have a clean marina, a clean dock area. Looking good and not like a boat storage. It looks intimidating to a recreational boater to see overhanging tarps, umbrellas. They may not want to rent the next slip over.”

So is Majestic trying to phase-out liveaboards?

“That’s the long-term plan,” Aaker said. “Before it was the short-term plan.”

The letter drew critical reactions from liveaboards as well as recreational boaters in the harbor.

“I don’t like it,” said Harbor Commission President Roger Carlson, of the pump requirement. “It seems like an increasing cost on these liveaboards, a lot of them are on fixed-incomes, and I don’t know if it’s solving a problem. Some of these boats only have a 1 to 2 gallon holding tank, so to send a pump is kind of silly.”

The current King Harbor lease runs out in 2032, at which time Aaker suggested the (new) lessee will be expected to make $30 to $40 million in improvements to the marina. This would include new docks, higher pylons and raised sidewalks for an expected sea-level rise, upgraded electrical and ADA.

Aaker asserts that the city will not extend the lease to Majestic if the improvements are not made.

“We’re not just going to give a 60-year lease to someone to let it look 60 years old,” Witzansky said. “This is very precious land.”

The city is looking into the water quality concerns.

“We’ll do some of our own testing, to follow up (what we already do),” Witzansky said.

“We assume most were hiring a pumper, anyway,” said Aker.

Some liveaboard boats do not have a holding tank.

“I’m going to pay $125 a month for them to suck air out of my boat,” said one liveaboard who wished to remain anonymous.

Amidst the marina’s 827 slips, two of the 63 liveaboards have left since this matter began. There have been no direct reports of leaked sewage in the marina.

“There could be. We’ve never had dye tabs, that’s the only way to tell,” said Aaker.

In early November, the city acted quickly when word spread that Aaker had called liveaboards to his office, one by one, to inform them of eviction within six months.

The city’s stake in the matter is indirect, but taps another municipal issue; a shortage of affordable housing.

“You’ve got fairly affordable housing there (at the marina)” said Witzansky. “Holistically you want people to have the opportunity for due process. It’s more of an empathetic position for us than anything else.”

Water testing will begin in the next few weeks by the Public Works Department and the city’s on-call consultants.

“At the end of the day, the city doesn’t have a major role here,” Witzansky said.

Majestic has jurisdiction in making certain aesthetic judgments. The boaters’ wharfage contract states that “the determination of adequacy of a vessel’s appearance is within the sole discretion of the Marina.”

A staff member who wished to be unidentified estimated that 10 percent of liveaboards are ever in violation.

“It is in the guidelines how much you can have on docks and it’s pretty minimal,” said Harbor Commissioner Carlson. “A liveaboard should be tidy.”

Liveaboard rights in general are tied to the wharfage contracts, which Aaker noted in the Dec. 21 letter “are commercial in nature and do not establish a tenant-landlord relationship.”

The letter followed statements by Stephen Proud, just-retired Redondo Beach Waterfront and Economic Development director, at a Dec. 13 Harbor Commission meeting, saying that the city was working on an education and awareness program with Majestic to inform liveaboards on how to keep the docks to the lessee’s preference.

“I think all marinas go through it,” Aaker said.

“The owners agreed to work with the city staff on these concerns,” said Proud.

Aside from commercial pump-out services, which service the marina, a free public pump-out system is open for use at one dock.

This is a sticking point for some liveaboards.

“I realize that they have to make sure waste is not dumped into the harbor, but I am against charging us for pump-out service when there are already pump-out stations in the harbor paid for by our taxes,” said the liveaboard who wished to remain anonymous.

Aaker counters that few liveaboards were using the free pump.

The marina did not allow liveaboards early on. The Guthrie family, sometime before the 1990s went to the city for permission to add liveaboards.

The higher slip fees for residents brought income and they helped with security, in an era when there was no security guard at the harbor. A night guard was added later, but King Harbor Marina did not have 24-hour security until seven years ago.

“When I started we had probably 100 vacant slips,” said Aaker, who first began working for the Guthries at one of their restaurants in the harbor, the Sports Center Bar and Grill, before transferring to the marina in 1991.

Whether to continue to permit live-aboards in King Harbor – as many marinas do – is up to the lessee.

“There are no provisions in the leases that require a certain number of live-aboards,” Proud said.

He added that if live-aboards eventually leave King Harbor, the city would prefer it to occur in a certain way.

“We’d much rather see that happen through slow attrition,” he said.

Boat Commissioner Carlson, and the majority of boat owners in the harbor who live on land, favors live-aboards as a security measure.

“I hope that Majestic starts to talk directly to live-aboards,” Carlson said. “I hope they manage to work out their problem and it lasts.”

“Is there any evidence the quality is bad, or is (the pumping fee) just another fee to get rid of live-aboards?” he said.  “If they’re concerned about water quality, they should get rid of the shedding styrofoam dock floats.”

King Harbor Marina is up for a five-renewal of its certification as a “California Clean Marine Facility” by the Clean Marine Program in 2022.

“That’s what kind of prompted everything going on,” Aaker said.

All things considered, Carlson suggests that if all of these issues are solved, he is not certain liveaboards will be allowed to stay, whether short term or long term.

“Banning liveaboards doesn’t seem like the answer,” he said. “If you have a messy house, does that mean nobody can live on that street?”

A View from the Slip

Another liveaboard who did not want to be identified decided last August that he would look for a place ashore. An Army veteran, he found the waiting list for Section 8 housing in Redondo Beach had 5,000 names on it.

He counts 10 to 12 other King Harbor live-aboards who are veterans.

“A couple were wounded in Vietnam, for crying out loud,” he said. “My feeling is we’re being left in limbo. Politically, and for political control, if (Majestic) gets this passed, then the city is just (on) meltdown, they are just bowing to Majestic.”

He lamented other changes since the new lessee took over.

“We’re still getting toilet paper and what else? Soap. But they’re letting the overall maintenance falter,” the man said.

What about the matter of dock clutter?

“That is not a legitimate complaint,” he said, citing the work of a marina staff member who patrols the docks to clear them of debris and tag errant items on and near boats — both recreational and liveaboard.

Like some other liveaboards, the unidentified man does not have a holding tank on his vessel. He uses the public restrooms in the marina a port-a-potty onboard.

“There’s more pollution in the harbor from power boats and their exhaust systems,” he said.

All told, the 20-year King Harbor liveaboard is skeptical of Majestic because of its background.

“They’re experienced in property and real estate on land,” he said. ER