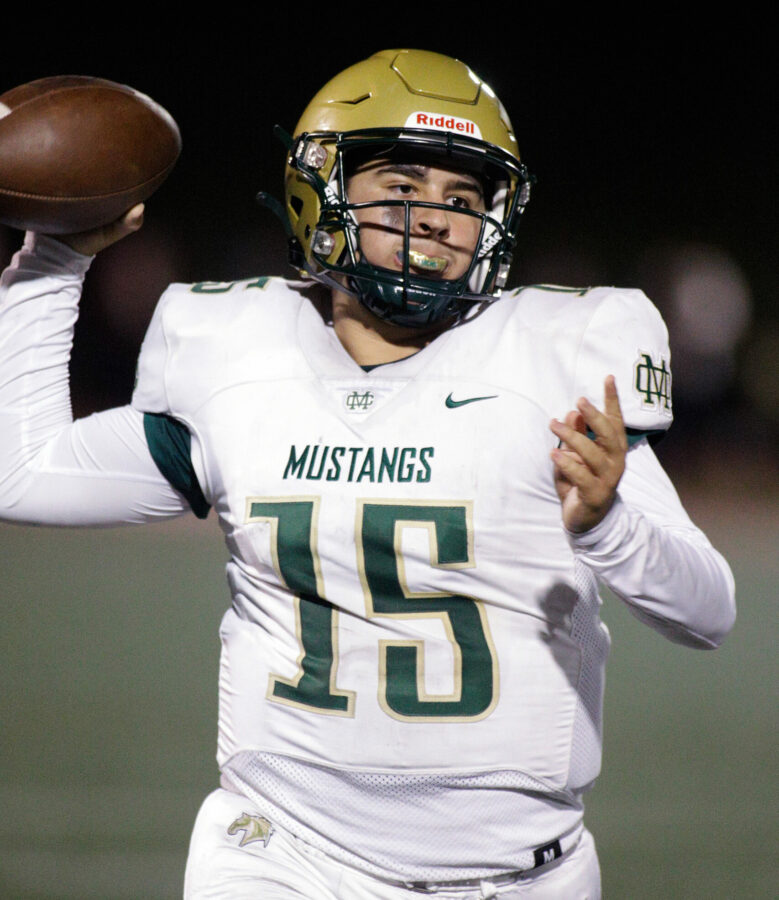 “I wasn’t going to let it affect me at all. I wanted to answer them with my legs,” Mustang running back said of Sea Hawk’s heckling.

Mira Costa seniors Matthew Kraskouskas and Cole Crotty have been best friends – and frequent teammates in football, baseball and basketball – since first grade.

“He’s my main man,” Kraskouskas said. “Always has been.”

For the last two years, the 6-foot-1, 200-pound Kraskouskas has been a fast, elusive workhorse running back and the 6-foot-1, 185-pound Crotty a fast, shifty wide receiver for the Mira Costa football team.  Together, they have been the heart and soul of an explosive offense that rolled over everything in its path except the Bay League football powerhouse known as Palos Verdes.

So when Crotty went down with a shoulder injury early in the first quarter of Friday night’s Battle of the Beach with neighboring Redondo, Kraskouskas knew even more of the offensive burden would fall on his wide shoulders and stout legs.

So did both sides of a packed house at Redondo High School.

On one side of the field, the Costa crowd began chanting “Matty, Matty, Matty.”

Kraskouskas heard them both.

“I love our fans being so enthusiastic, but I heard the Redondo chants too. I wasn’t going to let it affect me at all,” Kraskouskas said. “I wanted to answer them with my legs.”

And that’s exactly what he did. Kraskouskas rushed for 104 yards, and four touchdowns in leading his Mustangs to a 51-14 win in a rivalry game that got so lop-sided a running clock rule was used in the fourth quarter to put the Sea Hawks out of their misery, and let the exuberant Costa crowd go home early and celebrate.

Despite the no-contest final score, for a little while this was actually a competitive game worthy of the long-standing rivalry that has produced so many memorable games over the decades. 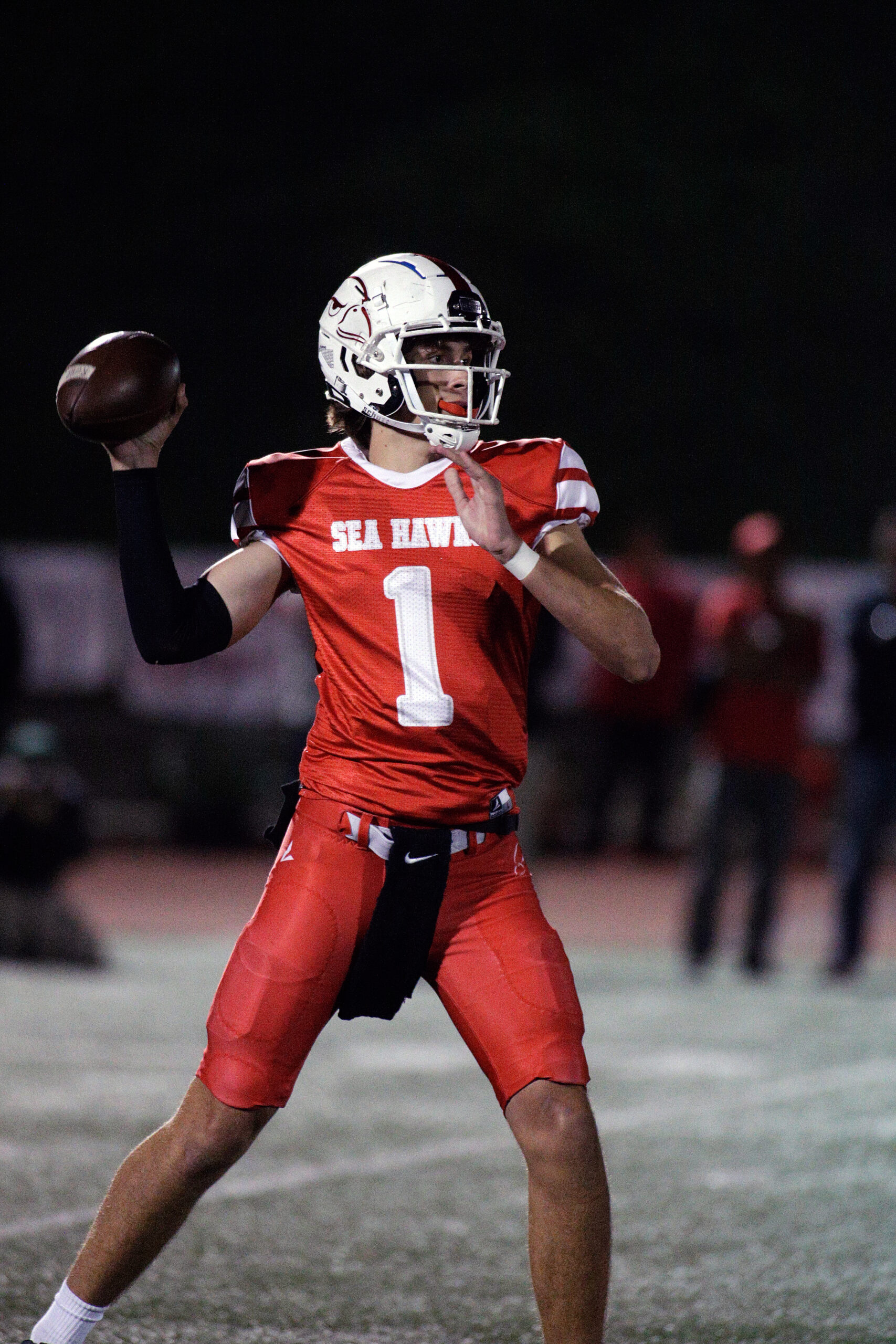 Friday against Mira Costa was not senior Sea Hawk Christian Hunt’s night. He was sacked twice on one possession.

After Crotty had to leave the game with a shoulder injury, Costa’s depth came to their rescue. They have another wide receiver, 6-foot-3 junior Reese Leonard, who is almost as productive as Crotty. As soon as Crotty left the field, the double teams that had been coming his way were now focusing on stopping Leonard.

So instead of trying to force his passes to Leonard, Costa’s sophomore quarterback Nico De La Cruz began zeroing in on 6-foot junior Charlie O’Connor while Leonard drew all the defensive back’s attention.

De La Cruz had a hot hand all night. He hit on 13 of 15 passes in the first half – many of them to O’Connor, who had eight catches for 102 yards and a touchdown. For the game De La Cruz completed 21 of 28 passes for 284 yards and two touchdowns

The Mustangs got to the two-yard line on a short pass from De La Cruz to O’Connor, and Kraskouskas bulled his way into the endzone to grab a quick 7-0 lead.

The same formula worked again a few minutes later: O’Connor caught a pass that got the Mustangs inside the 5-yard line, and Kraskouskas punched it in for a 14-0 lead.

As the Costa side of the field went crazy, the Redondo side of the crowd – which was easily twice as big – begged Sea Hawk quarterback Christian Hunt and his offense to answer the onslaught.

The 6-foot-5 Hunt responded with a series of successful passes that culminated in a touchdown pass at 11:53 of the second quarter to draw the Sea Hawks within 14-7, and for a moment at least both sides appeared ready to rumble.

But Kraskouskas got loose for a 28-yard ramble, O’Connor caught a 25-yard TD pass, and suddenly it was 21-7 and the rout was on.

Costa’s defense sacked Hunt twice on the next possession, forcing a quick punt. When Kraskouskas ripped off a long touchdown run to make it 28-7 with 2:25 left, all the air went out of the Redondo side of the field.

After the Mustang defense forced another three-and-out from Hunt and the Sea Hawk offense, Kraskouskas tacked on a fourth touchdown on De La Cruz’s 14-yard pass as time expired for a 35-7 lead. The outcome was never in doubt after that.

The win wrapped up second place in the Bay League for Mira Costa (8-2, 4-1) behind Palos Verdes, which went 5-0 in league after pulverizing Peninsula on Friday.

Mustang Coach Don Morrow and his team now will await the CIF-Southern Section playoff pairings, to be released Sunday morning at 10 a.m.

“We try to speculate who we’ll play, but it’s impossible to tell,” Morrow said. “We’ll wait until Sunday morning and just go from there.”

Kraskouskas said he is confident the Mustangs can win the four playoff games it will take to win a CIF championship.

“That’s been our goal all year, and it still is,” he said. “We won this game tonight for Cole, and I just hope and pray he can come back for the playoffs.”

A smiling Morrow praised his team for its poise after losing such an important player as Crotty.

Redondo finished 7-3 overall and 2-3 in the league after an incredible 6-0 start in Coach Keith Ellison’s first season.

The Sea Hawks are not guaranteed an automatic playoff berth, but Ellison said the school will apply for an at-large selection.

“Absolutely, we hope to keep playing next week,” Ellison said. “This whole year is just about establishing a new identity for Redondo, trying to build something. Whether we play next week or not, I think we’ve done a good job, but we’re not where we need to be as a program yet.”

For his part, Morrow said he will be anxiously awaiting word on the extent of the injury to his star wide receiver.

“Our hearts are with Cole,” Morrow said. “He’s such a tremendous person on top of being a great player.”