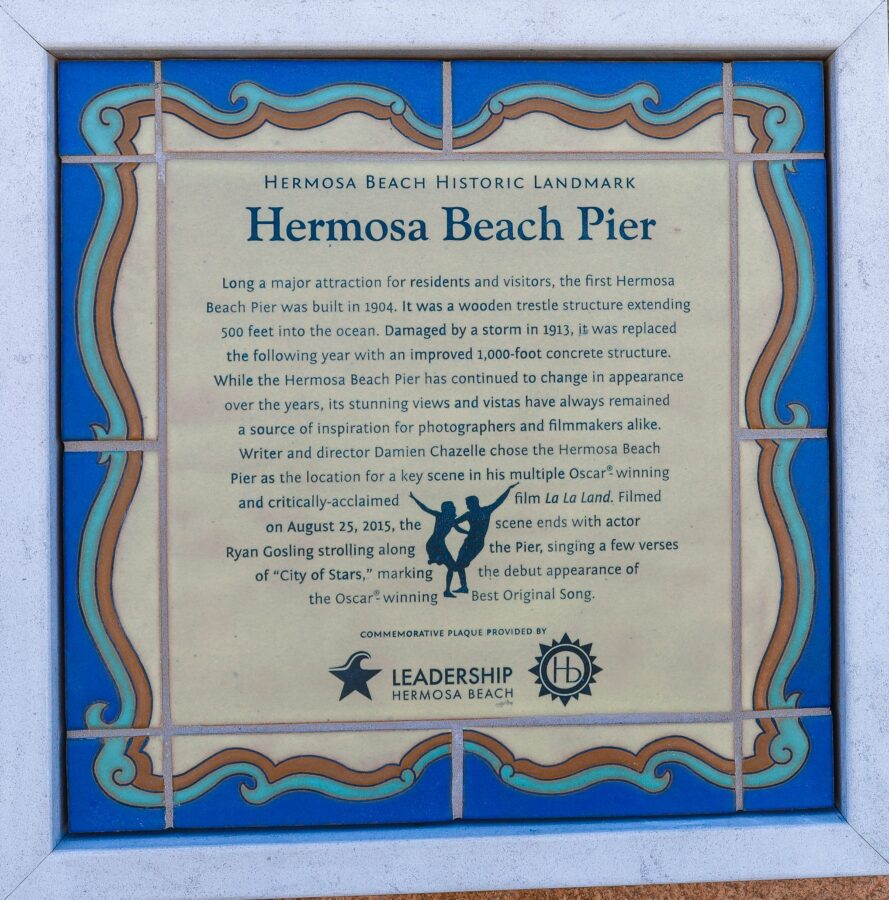 The plaque was found wrapped in a moving blanket 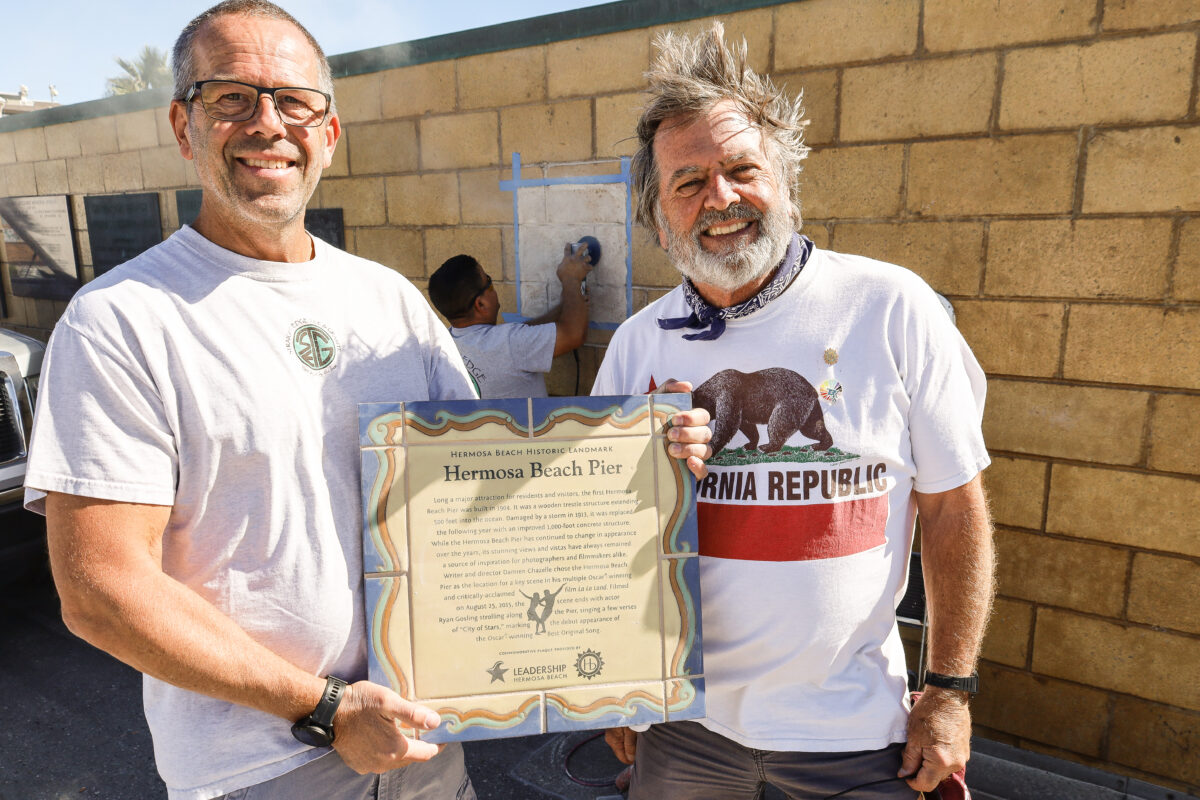 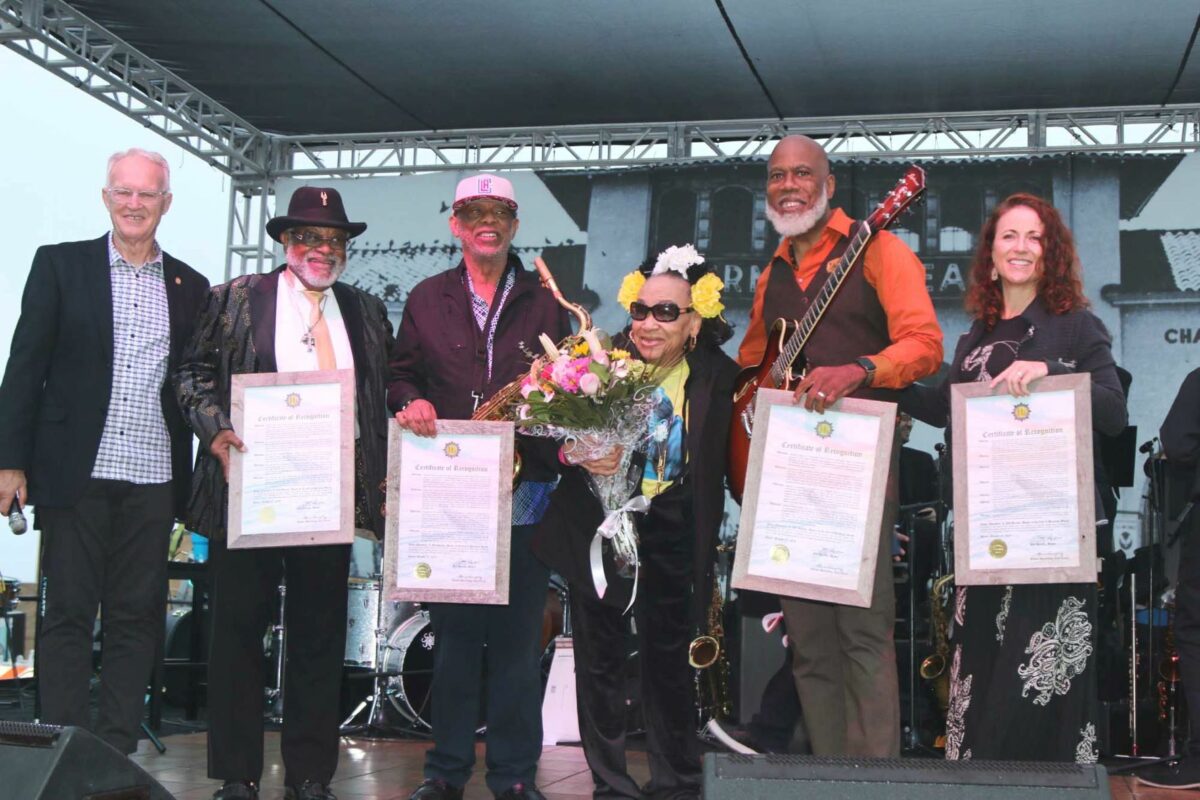 Musicians who performed at the Hermosa Beach Lighthouse Cafe in the movie “La La Land” were honored in 2018 during a jazz concert on Pier Plaza. Being honored by Mayor Jeff Duclos and Councilmember Mary Campbell are drummer Clifton Fou Fou Eddie, guitarist Jacque Lesure and saxophonist Charles Owens. Clora Bryant (center) was a pioneer female trumpet player who performed with Billie Holiday, Josephine Baker and Dizzy Gillespie. She was one of the few women trumpet players during the Golden Age of Jazz and continued performing through her 70s. Photos by Kevin Cody

As part of the celebration, Leadership Hermosa prepared a colorful, ceramic plaque, to be installed on a wall at the foot of the pier. The plaque read, in part, “Writer, director Damien Chazelle chose the Hermosa Beach pier as the location for a key scene in his multiple Oscar winning, critically acclaimed film ‘La La Land.’”

During an early scene, star Ryan Gosling leaves the Lighthouse Cafe on Pier Plaza and wanders out on the pier, whistling “City of Stars.” It’s the first time the movie’s signature song is heard in the film. (The film won an Oscar for Best Musical Score by Justin Hurwitz, as well as Oscars for director Chazelle, its cinematographer Linus Sandgren and its production designers David Wasco and Sandy Reynolds-Wasco.)

The Hermosa Pier scene wasn’t in the original script, location manager Robert Foulkes revealed to the crowd that packed Pier Plaza for the 2017 celebration.

“We had scheduled two days in Hermosa to shoot the scenes in the Lighthouse Cafe and it didn’t take that long. The script had a half page note about an outdoor dance scene. So we thought we’d use the time to shoot the dance scene. Damien [director Damien Chazelle] planned to shoot it in front of the store fronts that wind up Pier Avenue. But when we walked out of the Lighthouse at dusk that first day, we looked out at the pier and thought, ‘That’s the place,’” Foulkes said.

Music supervisor Steven Gizicki, who also spoke at the celebration, said the beautiful sunset that lights the pier scene was not, as many have suspected, a special effects creation.

“Whatever happened to the plaque?” Perotti asked Nelson. Nelson had taken a special interest in the city’s connection to the Oscar winning film because he had been the Oscar show’s stage director for 25 years, before retiring in 2013.

Nelson said the last time he’d seen the plaque, it was in the Hermosa Historical Museum.

Museum director Jamie Erickson, who joined the museum after the 2017 celebration, told Nelson she’d never seen it. But she found an email trail indicating the plaque had been taken to the public works yard.

Next Nelson called city manager Suja Lowenthal to ask that the plaque be installed on the wall at the foot of the pier. Lowenthal also joined the city after the 2017 celebration, and was unfamiliar with the plaque. But she tracked its responsibility back to Nico De Anda-Scaia, a former city analyst who is now Azusa’s assistant city manager.

De Anda-Scaia told Lowenthal the plaque’s installation had been approved by the city council, but the work had fallen between the cracks when the former public works director left.

Armed with approval to have the plaque installed, Nelson went looking for someone to do the work. Rock Mill Tile and Stone, on Pacific Coast Highway, referred him to Chris Porner, owner of Straight Edge Tile and Granite. The Manhattan Beach resident and frequent visitor to the Hermosa pier offered to install the plaque for free.

Porner and his crew installed the plaque on Tuesday, just in time for Nelson to surprise former Mayor Duclos and his wife Christine, a longtime Hermosa View teacher, on their return to town. The couple moved to San Diego, but plan to celebrate their 50th wedding anniversary on Thursday evening at La Playita, just north of the pier. ER