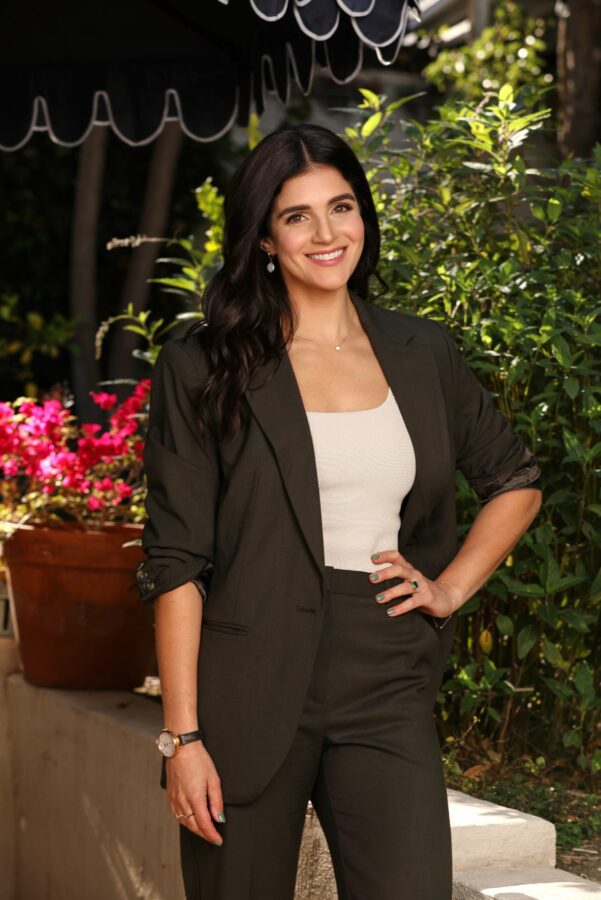 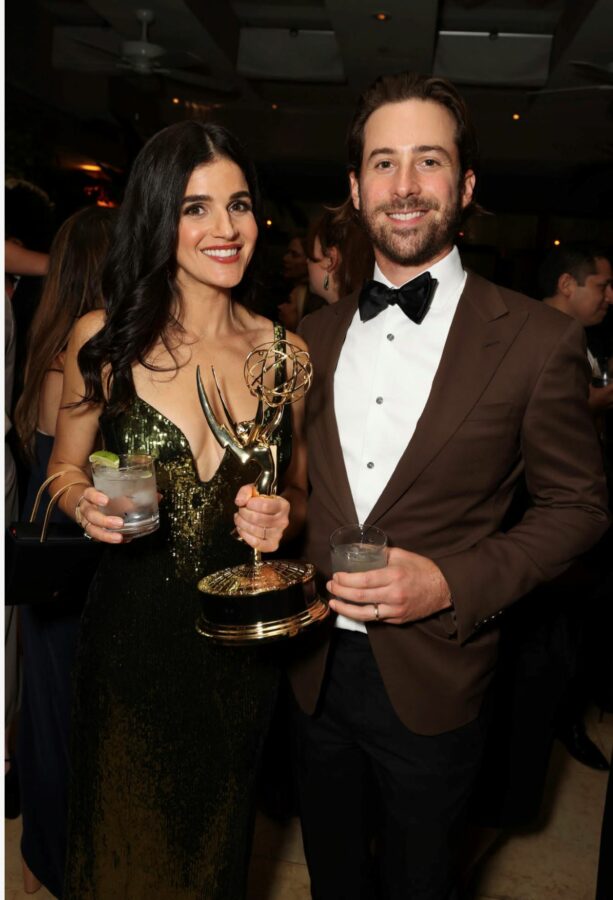 Liza Katzer with husband Chris Bruno at an Emmy Awards party hosted by AppleTV+ at the Sunset Tower Hotel in West Hollywood. Photo by Eric Charbonneau

Last year “The Hollywood Reporter” named Peninsula native Liza Katzer to its list of “35 rising executives 35 and under.” Katzer earned the distinction as the co-executive producer of the 2021 Emmy Award winning Apple TV+ comedy “Ted Lasso.

The breakout series, about a bumbling American college football coach hired to lead a British pro soccer team, was the first series to win an Emmy in its first season. It also set a record for the most Emmy nominations for a new comedy.

Co-creator, and showrunner Bill Lawrence said of Katzer, “Liza has so many strengths, it’s hard to list them all. Her biggest value to us as a producer is that she’s annoyingly good at everything. It’s super fun to work with her and take credit for her work.”

Katzer followed a traditional entertainment executive path, learning the industry by fire as a talent agent’s assistant. But unlike trope-ranting Tinseltown executives, Katzer has made it her mission to break the traditional mold of Hollywood leaders. She became a Hollywood dealmaker her way, by being curious and kind, just like Ted Lasso.

After graduating from Northwestern University with a Radio/TV/Film major, Katzer joined United Talent Agency in Beverly Hills as an assistant.

She was uneasy about the job before she even started. She had watched the fictional “Entourage” agent Ari Gold verbally assault his underlings.

Katzer remembers thinking, “Everyone said you need to have a thick skin. I don’t think my skin is that thick. I’m very sensitive, and vulnerable. I took that job because that was what you’re supposed to do.”

“It was very cutthroat and loud. There was a lot of anxiety, urgency and big personalities. I felt the anger and intensity was unnecessary,” she said.

Working at UTA was a low point in her life, physically and emotionally, she recalled. She was sleep-deprived, and in a constant state of stress.

In 2009, on a sun-kissed Sunday, Katzer and two friends were driving up Pacific Coast Highway for a carefully planned getaway to Topanga Canyon for a festival. Katzer recognized how much she needed the day to go perfectly. It didn’t.

The group hit horrendous traffic, and realized they wouldn’t make it to the festival in time. “I was very much a perfectionist then, trying to be in full control,” Katzer said. “I couldn’t roll with the punches when things didn’t go perfectly according to plan.” As the car turned around, she “felt so defeated and depressed.” She knew she faced another evening of the “scary Sundays,” when she would ruminate about the toxicity that would start all over again the next day.

“I was really underwater at that time. To be perfectly honest, I think it was just a day-to-day survival.”

Katzer quit, nearly to the day of her one-year anniversary at the agency.

She went to work at Walt Disney Studios, where she found the climate much better. In 2011, at the behest of Lawrence, Katzer joined the firm he founded, Doozer Productions. Doozer is a Warner Brothers affiliated production company that develops television series with the studio’s financial backing and production resources.

“Bill has a no-asshole policy, which he had from the first day I worked with him. Doozer was an absolute breath of fresh air. It was such a relief to see someone who is as talented and as good a leader as Bill could also be even-tempered, incredibly kind and loyal.”

Lasso star and co-creator Jason Sudeikis had approached Lawrence about developing a series based on the Lasso character. Sudeikis had played Ted Lasso in a 2012 commercial for an English soccer team.

As a “Ted Lasso” producer, Katzer shepherded the show from the initial idea to casting, wardrobe, set design, production, post-production, premiere, and marketing. Now, she juggles the needs of the actors, AppleTV+, directors, and crews while adhering to budget constraints and strict schedules.

“Ted Lasso” executive producer, and writer Jane Becker said of Katzer, “From the moment we met, I knew Liza was a different kind of producer. She is such a strong advocate for unique, comedic voices, and prioritizes that over everything else. She’s a hard worker and a good person.”

Katzer believes her communication style, and natural curiosity have been instrumental to her success.

As the in-house “tastemaker” of a production firm, Katzer spends a lot of time in meetings with actors, directors and other creatives. “I get to be very curious because I’m guiding these meetings, and asking questions while trying to read the person I’m talking to.” She likens the process to dating: seeing if there is any chemistry, spark, shared interests.

“She’s so personable,” Lawrence said. “She first excelled with us as a liaison to other young talent. Young writers, and actors gravitate to her. Nowadays, Liza fills whatever need a project has. She excels at story, script notes, casting, and at the same time, can fly to a location and revamp the wardrobe, or even the look of the whole show.”

For a network or streaming series to be renewed for a second season is a rare achievement. “Ted Lasso’s” third season premiere is scheduled to air this August. The show has not only collected a bucket full of Emmy, Screen Actors Guild and Critic’s Choice awards, it has also become part of the cultural conversation. Critics and fans alike have described the series as perfect for our pandemic, politically discorded times. It’s a show that makes people feel good.

“People connect with it, and it makes a difference in their lives. It’s such a new experience (to have a show with a broad reach that now I think that will be my true north. But it is so hard to get that lightning in a bottle,” Katzer said.

As a teenager, Katzer was the person who made others laugh. She described herself as a late bloomer, and not one of the pretty, popular girls. “I didn’t really fit in. I was a fish out of water growing up in Palos Verdes.”

Katzer was a “drama kid,” performing in community youth productions, starting in fourth grade, and later in high school productions at Palos Verdes Peninsula High School. She also danced and played basketball. “I just wasn’t the type of cool kid I was striving to be, so that added to a lot of my insecurity.”

Katzer said she struggled with depression, anxiety and perfectionism. “Part of my recovery and evolution over time included many years of therapy. I decided to make my mental and emotional health a priority,” Katzer said.

In her teens, Katzer dreamed of becoming an actress. Her parents paid for acting classes at the storied Lee Strasberg Theater, and Film Institute in West Hollywood. She originally majored in theater at Northwestern. She performed sketch comedy, but soon realized she didn’t have a passion for performing, and pivoted to pursuing a career on the business side of entertainment.

When she hit her 30s, Katzer changed her mental outlook.

“I developed confidence and trust in my own voice. Before, I would defer to others on career, and romance advice. It took a while to develop trust and confidence in myself. However, the neuroses still stand.”

When Katzer started working at Doozer, she would present ideas for shows she thought her boss would like. More recently, she said, “I’ve started pushing projects that are important to me, with writers I click with, and stories I’m attracted to.”

She wants to develop shows centered on women, especially older women, and those of different ethnicities, and body types.

Hollywood is changing in response to the #metoo and #timesup movements, Katzer believes,  albeit slowly. “Hopefully, some of those intense Harvey Weinstein, Scott Rudin old-school, entertainment guys will be bypassed,” she said.

These days, when something goes wrong at Doozer Productions, she, Lawrence and other team members “kind of just laugh, because ultimately we’re all so lucky to be doing this job,” she said.

Looking back on that evening at the Emmys, Katzer said, “It felt surreal and sort of wild. It was never a goal or dream to win an award. I just like to work on shows with people you like and make stuff that’s good.” PEN