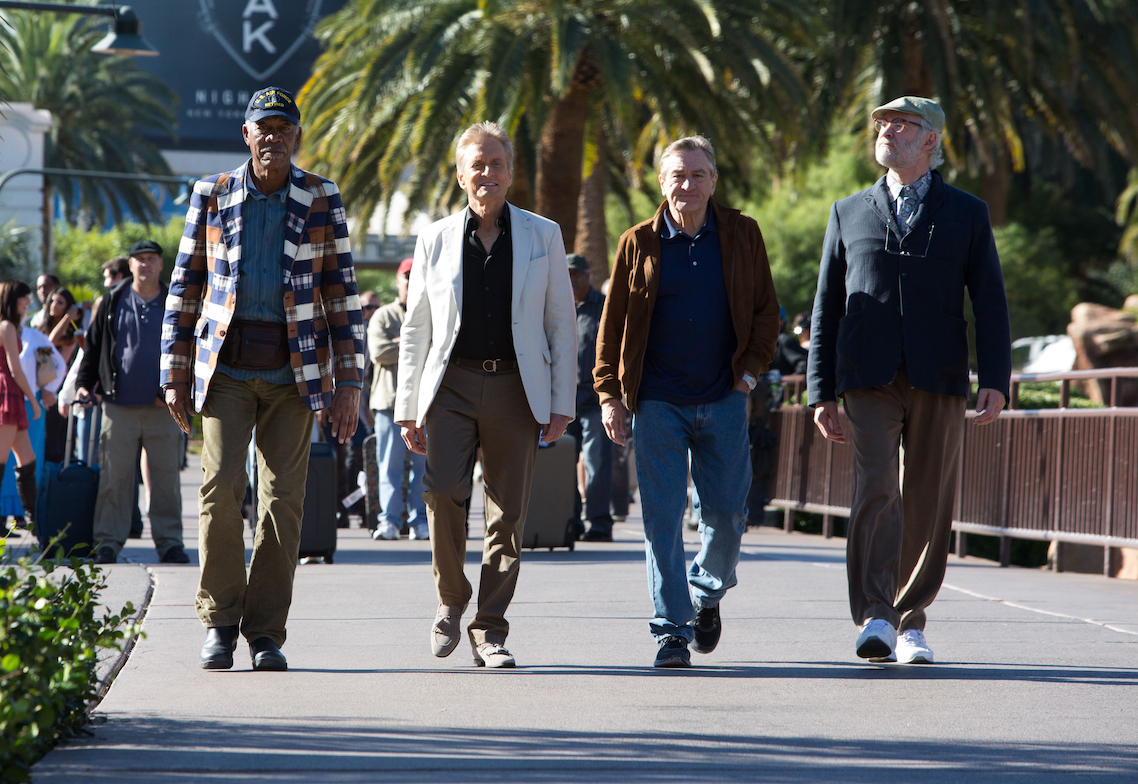 The pitch for “Last Vegas” is evident shortly after the beginning, although truth be told, I was late to the screening and have imagined the first few minutes, although not much imagination was necessary and certainly none was provided by Dan Fogelman, the writer, or Jon Turtletaub, the director. No doubt it sold on the pitch – “Hangover for Geezers.”

Briefly, Billy, the confirmed bachelor of a group of childhood friends known as the Flatbush Four, is about to marry for the first time. Yes, the creepy rich old guy is going to marry a 32-year-old hottie, much to the chagrin of her parents and the amusement of his friends. His friends decide that a bachelor party is in order and it will set them free from their repressive households and help facilitate a reconciliation between Billy and Paddy, who haven’t spoken in over a year.

Sam has been married to Miriam for 40 years and the relationship has been dulled by monotony and a relocation to Florida (cue all the retirement jokes told by dead comedians that you can think of). Miriam, winning kudos for misguided understanding wife of the year, sends him off with a cute card – what happens in Vegas, stays in Vegas – complete with a condom, Viagra and permission to stray provided he comes back rejuvenated and happy. He will spend most of his waking moments in Vegas approaching every available girl with the excited news that he has Viagra, a condom and his wife’s permission to fool around. It’s quite a turn on. Archie, divorced at least twice, is now living with his son and family following a stroke. They allow him the pleasure of nothing – no smoking, no drinking, no carousing, no late nights; no nothing. In order to join the others, he contrives a story about attending a church retreat. Archie and Sam then proceed to Paddy’s apartment in the city, an apartment he has rarely left since his beloved wife passed away the previous year. Off they go on adventures in Sin City where they will cause trouble, get into trouble and live large. They meet the lovely Diana, a former tax attorney living her dream as a lounge singer in a low level casino bar; and clearly it is she destined for Billy, not the 32 year old lovely with the Oedipal complex. I haven’t left you many blanks, but ones that are left you can figure out on your own. Movies like this don’t have spoilers; they’re obvious from the get go.

Fogelman has written a script that wouldn’t have passed muster as an episode of “The Golden Girls.” There is no discernible development or depth. Not a cliché has been ignored; no stale joke has been left on the table; all infirmities and stereotypes have been dragged out and put on display. Of course the director must receive the lion’s share of blame since directors are always the first to claim the glory and here, dear readers, there is definitely no glory to claim. Obviously neither gentleman has yet reached the threshold of receiving those annoying initial mailers from the AARP, and are still at that sophomoric stage where they think jokes about “peeing oneself” are hilarious.

The cache of acting talent that went into this film was formidable. Michael Douglas (Billy), in a too on the nose bit of type-casting, seems to have cornered the market on lasciviously creepy old rich guys. Mary Steenburgen is a dignified Diana. The sparkly voice is still there but it resides in a mask of what used to be a lovely face now tightened with so much surgery that her eyes have sunken and no longer glow.

Kevin Kline (Sam) has been given all the shtick and he is unable to get beyond it. His part is the least well-conceived, or, worse, he was unable to conceive it. Robert DeNiro (Paddy) has been given little of substance in the past few years; the scowl he wears in character is in danger of becoming permanent. Still, even in such drivel, he manages to find dignity and growth in a one-dimensional role. Morgan Freeman is the engine that drives this film and would that it were worthy of his smooth, sympathetic, understated presence. He would lend dignity to a supermarket opening (which would probably have been more interesting).

I suppose it’s pointless to wonder what the French would have been able to do with this scenario. Surely they’d have found the edge and irony of 70 year old men cavorting with scantily clad 20 somethings in a bid to recapture their youth. They would certainly have juxtaposed the “fun” with the all too evident “creepy” factor. But they didn’t make it, Jon Turtletaub of the “National Treasure” movies did. Enough said.

The film itself is an advertisement for Las Vegas and one can only imagine the product placement and brand deals that were struck in making it. No doubt the Aria hotel paid handsomely for being featured so prominently. And yet, somehow, none of it is appealing. Drunken debauchery in and of itself does not equal humor (or even good times). But if humor is not on the menu, at least lots of Double D’s and cheeks (the derriere kind) will find their way into your heart (or other parts).

If only what happened in Vegas had stayed in Vegas.

Opening November 1 at a theater near you. Rated PG-13 for all those Double D’s.