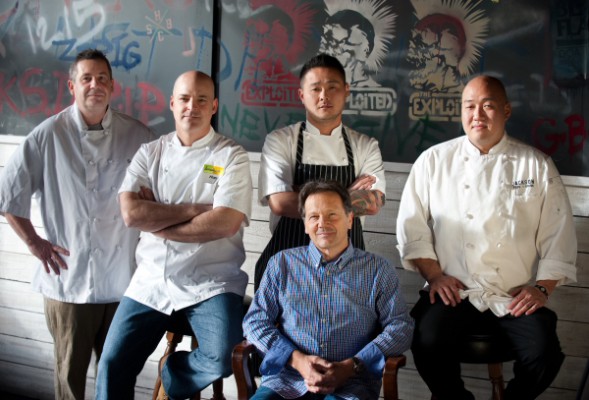 For over a decade, one of my first tasks of the year has been to make a list of the best new restaurants in the South Bay. It’s never an easy job. The overall quality of the dining experience in the Beach Cities has been improving, and it’s harder each year for newcomers to match the standards of their established competitors, much less excel in comparison.

The size of my list has varied, depending on the number of establishments that opened and the virtues of the places under consideration. This year I got to seven before deciding I had included all that unequivocally qualified. I hesitated over a few places that showed promise but were too inconsistent in food or service. In the end I decided against them – to make the cut a restaurant had to offer a reliably good experience.

As always, there are judgment calls about just what makes an establishment new – merely changing the menu or ownership is not enough. Some established places made major changes but kept the same identity, and that was enough to disqualify them.

One name is missing from this list – House of Pita would have certainly made the cut had they remained open, but they closed in late November amid reports of illness among the owners. Condolences to the Naouikhir family – we hope to see you again, and already miss your wonderful whole-wheat pita bread.

So without further ado, here is my list of the best restaurants to open in the South Bay in 2012 – sorted alphabetically this time. 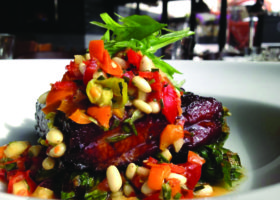 redecorating the former Union Cattle Company, announced the hiring of a celebrity chef, and announced that they were going to restart the microbrewery after years of inactivity. Somehow they delivered on every level, serving adventurous food in an outlandish but comfortable environment while pleasing beer snobs with the output of those big copper tanks. Founding chef Max diMare turned things over to Tin Vuong and standards not only didn’t fall, the place got even more adventurous. Recently Abigaile started hosting special dinners that pushed things further, exploring the limits of a cuisine that is both hedonistic and healthy. This stylish restaurant offers food for adults in a casual, whimsical environment, which fits Hermosa very well and has elevated the local scene. 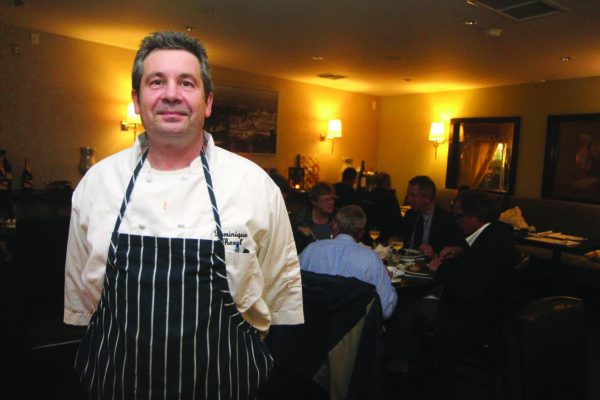 The only restaurant from Redondo to make the cut this year serves French food in an elegant atmosphere and is very reasonably priced – a rare combination indeed. You can get a starter and entrée here for under twenty dollars, and that’s not a happy hour or midweek price – it’s just what they charge. Chef Dominique Theval has traveled the world and undoubtedly could bring in influences from Japan, Cambodia, or other places where he has traveled, but his heart is in France, and he cooks with mastery of those traditional flavors. He has the support of an expert serving staff that knows food and wine as well as the art of providing hospitality. Dominique’s Kitchen has made a brilliant debut, every detail perfect from the day they opened, and they have made an unpromising location into a destination for diners.

I have hardly ever gone to a place with lower expectations than on my first visit to Establishment – their website was a joke, the 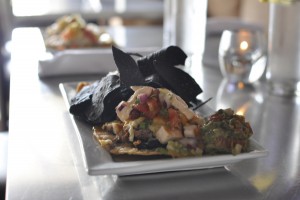 phone was out of order, and it looked like a lounge scene at which the food was an afterthought. I was surprised by innovative versions of bar snacks and some eclectic offerings – nachos that only vaguely resemble the usual pile of cheese, chips, and beans, quesadillas that owe more inspiration to Napa than Mexico, and barbecue-style ribs that are more than the usual snack to accompany booze. Establishment is not doing anything remarkably different from many bars and dining lounges in the South Bay, but they’re doing it remarkably better. It’s a rare triumph for a lounge-style place where skill in the kitchen seems to be appreciated by a crowd that is doing more than just making the scene.

The South Bay’s only restaurant that celebrates New England and East Coast resort dining has had some challenges, among 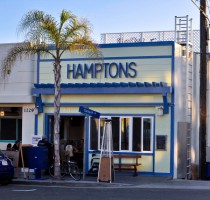 them the fact that very few locals have even heard of this cuisine. When I wrote about this place in August I called it a good restaurant that could become a great one, and that judgment stands; they are struggling for consistency, but there are enough excellent items here to keep them on my list. Their chowder, grilled seafood, and especially the crabcakes are solid renditions of East Coast favorites, and the pizzas have been praiseworthy. The owners are still tinkering with the food, having recently hired a new chef, added an oyster bar, and started opening for breakfast, so there is a sense that Hamptons is experimenting with ways to improve on an already good operation. 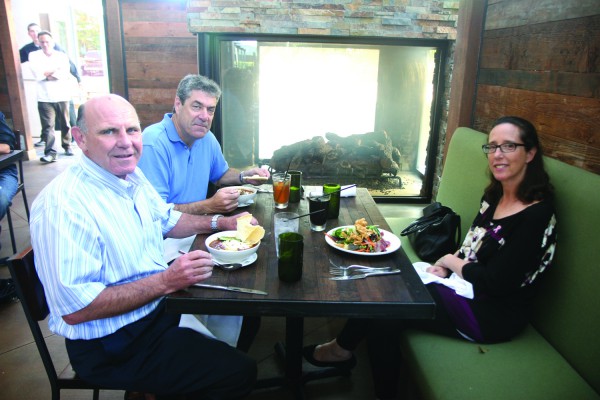 Lunch at Jackson’s Food and Drink in El Segundo. Photo

The name is similar, the chef-owner is the same, but this not a replica of the restaurant that Scott Cooper used to run in Hermosa. That place was a bistro specializing in steaks and pastas with modest forays into adventurous cuisine – this one is a daring venture focused on artisanal foods and unusual combinations. There are some normal dishes that are very well done – pizza using homemade fennel sausage, roast chicken, even an exceptional steak, but the most fun way to dine here is to order seasonal tapas and share. The place has a lot of character for a location in a modern building next to the movie theater on Rosecrans, particularly the patio with fireplace and weathered wood siding. Jackson’s is a comfortable, characterful place in an area dominated by chain restaurants, an original restaurant in the Rosecrans corridor.

In over a decade of writing these best-of lists I have never included a chain restaurant, but I’m doing that now because this one brings something unique to the area. I’m not a fan of the fast-food interior or paper plates, but if that’s how they keep costs down it’s something I’ll deal with. Lemonade has a price to quality ratio that is second to none in the South Bay, and they excel at fresh-tasting salads, stews, and other prepared dishes. They are trying to bring chef-driven style to a cafeteria, a noble experiment that does have limits. There are made-to-order sandwiches for those who want to customize things, but otherwise you have to find something they have that you want. This is not much of a problem because there are so many good items attractively displayed that something will tickle your fancy. Lemonade sometimes goes beyond what they can do well, as in the grilled items that are best served immediately, but if you avoid those you can get exceptional fast food in an area where that is a rarity. 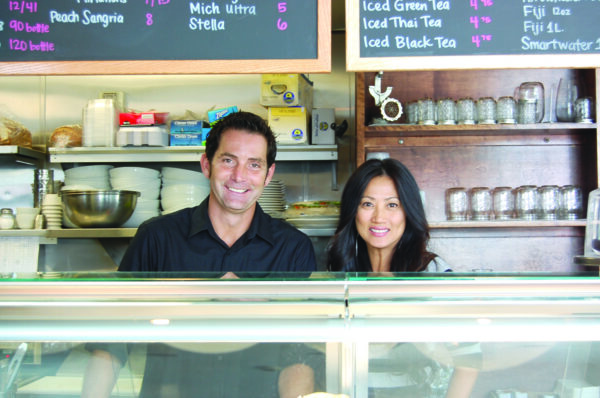 The little café at the corner of Marine and Highland is in a residential district, so their menu is probably calibrated to what will please the locals in North Manhattan. Based on the evidence, people in these parts are big fans of artisan sandwiches, homemade soups, and freshly ground burgers with organic fixings. The Marine Street Cafe open from morning until night, so you can get egg dishes for breakfast and a limited but interesting menu after sundown, but the specialties here seem to be paninis and sandwiches. Their version of a Vietnamese chicken banh mi is very good, the burger is a standout, and the panini with melted gruyere, peaches, and dates is odd but wonderful. The price for a meal here will be a bit higher than it will at most places in town, but the payoff is superbly fresh food made from organic ingredients.

In 2013, several major openings have been announced this year, most recently the arrival of Grimaldi’s Pizzeria in the long-shuttered Daily Grill space on Rosecrans. Killer Shrimp will open in Hermosa, though they’re being coy about exactly where, and Colgan’s Gastropub will open downstairs from La Campana. In Manhattan Beach, the owners of MB Post will debut a seafood restaurant near their current place, the Boardroom and Pitfire Grill will finally see the light of day, and a new operation will move in at the current 12 + Highland. Meg Hall, renowned for her Made By Meg catering business, will open a restaurant in Redondo, and a Czech restaurant called Praha will open in Riviera Village. The evolution of the local dining scene continues, and by the time I sit down to write this column a year from now it will be to document a local scene that will be even more interesting.

Related: Jackson’s is back, better than ever in El Segundo