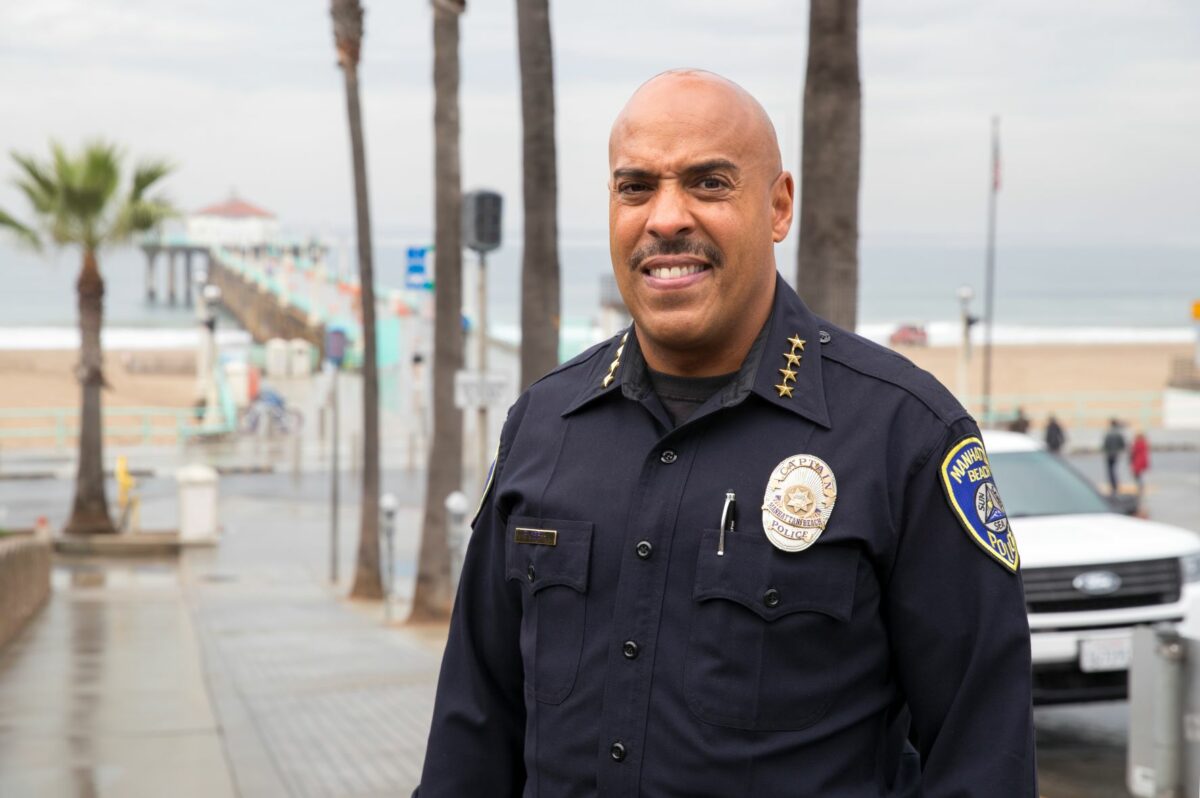 Chief Derrick Abell is retiring after an historic 31-year career with the Manhattan Beach Police Department. Photo by Brad Jacobson

This was not about his leadership, of course. Most of the City of Manhattan Beach had followed Abell’s leadership, either during his prolific tenure as police chief, or when he also took the helm of the fire department, or when he filled in as city manager, or as interim human resources director, or at various other points in his three decades wearing MBPD blues.

It was instead about one of Abell’s most powerful leadership capabilities —  his ability to speak, with grace, warmth, and absolute moral clarity, and move people in a way few leaders are able.

And so at last week’s City Council meeting, as city leaders said farewell to Abell at the close of his 34-year career, they made him wait —  a bit uncomfortably, bouncing on his heels with the unease of being at the center of attention —  as each offered a bouquet of parting words.

“You’ve always led by example,” Moe said. “You lead from your heart. You always put people first, which is important. You’re popular with employees, not just in the police department, but with all departments, and you’re quick to recognize people’s efforts, and you also share the credit very freely…You are a voice of reason. You’ve been a confidant for me. I want to thank you for that. I am going to miss your big smile, your steady hand, and your natural leadership.”

Mayor Steve Napolitano noted that Abell started with the City a year before he was first elected.

“And we have tracked each other ever since,” Napolitano said. “I’m 30 years and you’re 31 years serving this community, and you’ve done it with what I would say is a dedication, and a commitment that from the first day you got here until this very day has made Manhattan Beach a safer place from top to bottom. We owe you a debt of gratitude for that. It’s not just a job. You didn’t just show up. You didn’t just collect a paycheck. You put your heart into this community. No one has a police chief who then goes and coaches high school [football] to a championship if he’s not dedicated to the very fiber and being of Manhattan Beach…You bleed Manhattan Beach.”

Napolitano was referring to the fact that through much of his MBPD career, Abell volunteered as a football coach at Mira Costa High School. Councilperson Joe Franklin first encountered Abell in this capacity and marveled at his ability to mentor, not only within MBPD but generations of MCHS students.

“You are very responsible for helping guide many of Manhattan Beach’s boys, and girls, and now men, and women into their lives, and lives of service and lives of gratitude,” Franklin said. “So I want to thank you for that.”

“You’re a man of towering integrity, deep faith, and impeccable manners,” she said. “This world would be such a better place if there were more men, fathers, sons, employees, and police chiefs like Derrick Abell.”

“You brought the word ‘community’ into community policing in a way that is unprecedented, and it will always be a part of how we aspire in this city,” Stern said.

Councilperson Richard Montgomery recalled the day in 2020 when the Black Lives Matter protests came to the Manhattan Beach Pier.

The previous day, Abell had already identified its leaders, and he did so not through investigative work, but simply through his gift for knowing his community. Abell was walking downtown, where nervous merchants were boarding up storefronts, when he saw two former MCHS players he’d coached. He talked to them, and came to understand they were among the protest’s leaders. They ended up back at his office, and Abell was able to work cooperatively with them towards establishing a peaceful protest.

The next day, as nearly a thousand people streamed down towards the pier, Montgomery was in the City parking lot above the pier, and was shocked when he saw Abell walk into the thick of the burgeoning crowd of activists. He recalled thinking, “Oh no, I hope this doesn’t go south.” The BLM protest was partly against police abuses.

“Here’s our chief, walking down in the crowd by himself, no captains, no big guys behind him,” Montgomery said. “Just him. He just walks right in the middle of it, starts talking to guys, shaking hands…I said, ‘Chief, what did you say?’ What he said, effectively, was, ‘Hey buddy, it’s cool. You are here to protest, no problem. But if there are bad actors in this group, point them out to us now, we want to know who they are. If things go bad, we are taking everybody to jail.’”

The protest unfolded with a remarkable lack of conflict, unlike in cities such as L.A., where protests simmered into near-riots. Abell later praised the kids who led the protest. He played a key role, as Moe said — it just wasn’t in his nature to take credit. “Others before self,” was Abell’s mantra as a leader, and he lived those words as chief.

“This is so uncomfortable for me, I can’t even begin to tell you how I feel right now,” he said when it was finally his turn to speak.

His instinct was to flip the script, and make this about others.

“It’s been a long ride in this profession, with all that’s gone on over the years,” Abell said. “But I will tell you, from the very first day that I started here, the kindness, the support that I’ve had from within the organization and throughout this community has been second to none. I know we all are biased about our cities, about our departments, about the respective places we work. But I can tell you firsthand, coming here as a lateral from another place, as someone who didn’t know anything about Manhattan Beach prior to arriving here —  the love, the compassion, the support that you showed me and all [the MBPD officers] who are sitting in this room is second to none.”

“Of all the things going on right now, and all the divisive things that we hear in society, the one thing that holds us together is relationships, and love. That will never be surpassed by hatred….I will never take for granted what you have given me. I am humbled by the fact that you accepted me into this role to serve you in this community.”

Abell gave emphatic thanks to his MBPD colleagues.

“The men and women who serve you in this department, I will tell you that their hearts are in the right place,” he said. “We don’t always get it right but we strive to do the best…and be the best of themselves. So from me to you, this department, and everybody out there, I love you, I appreciate you, I thank you for what you guys have done for me, what you did to help build me. I truly appreciate it, and I will never forget.”

He also remembered his fallen comrade, Officer Martin Ganz, who was shot and killed in the line of duty 29 years ago.

“Marty Ganz, I love you brother,” Abell said, looking skyward.  “I know you are up there somewhere looking down on us right now, probably laughing at me. But the whole point is, I miss you.”

He thanked all his fellow department heads, and city employees and singled out Bruce Moe, whom, he noted, had not changed in the 30 years, which was a good thing.

“You’re kind, you’re passionate, you are a hard worker, and you expect the best from people,” he said.  “But your heart is in the right place. That will go a long way in life. I truly appreciate what you’ve done for me, my friend.”

He thanked his mother, Virginia Abell, a resolute Alabama woman who raised him, and his sister as a single mother in Inglewood with a formidably strong hand, imparting her son many of the life lessons he has continued to teach others. “Never accept mediocrity,” she told him.

“I can’t even begin to tell you how many times I’ve heard that phrase, over and over, but it rings true,” he said. “If it wasn’t for my mom, I wouldn’t be where I am today.”

He thanked his children, who have likewise grown up to live lives of service. “It’s one thing to raise children, but as a parent, you always love to see that your loved ones turn out to be the best of themselves,” Abell said. “Right now, I’m so proud that they are out there serving others before self. That’s what it’s all about, not about you.”

Finally, Abell thanked his wife, Jodi, whom he called “my queen.” His voice broke with emotion.

“This woman has been my backbone from day one…She’s been there for every phone call, every loss, every promotion, every excitement, every great opportunity, and tragedy that I have experienced,” Abell said. “She is the glue that keeps it all together…I love her for being there for the kids and at everything I couldn’t be at the time. I truly appreciate everything you’ve done. You made it possible for me to be successful and serve in the capacity that I have.”

Napolitano, taking the microphone back before a final photo was taken of Abell with Council, turned to the audience.

“If you didn’t know why everyone said what they said before he spoke,” he said, “now you do.”

New chief will be sworn in

Chief Johnson was selected as the new Manhattan Beach Police Chief following a statewide recruitment process that included outreach with community stakeholders, including residents,  businesses, and employees. Chief Johnson has over 21 years of experience in law enforcement. As MBPD chief, Johnson will oversee a department with an authorized staffing level of 65 sworn and 42 civilian employees.

“The Chief of Police serves an important leadership role within our community,” said City Manager Bruce Moe. “We invite the  community to welcome Chief Johnson during the swearing-in, and badge pinning ceremony, and meet her during community reception immediately following the ceremony.” ER