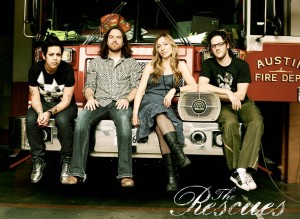 The plight of the solo singer songwriter is stark. Alone on a stage, night after night, accompanied by a guitar or a piano, one voice raised in song. It is a soulful but sometimes lonely musical endeavor.

Thus The Rescues gathered: four singer songwriters, all successful in their own right, came together to form a band. Over the past year, the buzz around The Rescues has slowly built – they signed a record deal with Universal Republic, scored song placement on Grey’s Anatomy, and performed a series of sold-out shows in Hollywood (one which had scalpers selling $10 tickets for $300).  A self-titled four-song EP released this week gives a small but tantalizing sample of what the buzz is about, demonstrating what happens when four adventurous, seriously skilled songwriters raise their voices together in song.

Beauty happens. The four voices of The Rescues – Kyler England, Rob Giles, Gabriel Mann, and Adrianne Gonzalez – soar together in swirling harmonies serving well-crafted songs that somehow both use pop conventions and simultaneously transcend them. The Rescues are the antidote to the manufactured pop band now in prevalence: all four are highly trained musicians, and it shows, but together, they also have a rare musical chemistry that can’t be taught or trained.

The Rescues, quite simply, fit.

“It’s pretty amazing and powerful,” said England in an interview last week. “It’s really cool to be a part of, because you just play your position, you just contribute your part, and then it comes together to make this thing that is way bigger than yourself. I think because all of us had been solo artists for a while, writing by ourselves, touring by ourselves and that kind of thing, this group is really special.”

The roots of The Rescues go back to the Berklee College of Music. England and Gonzalez met each other the vaunted school – one of the finest musical academies in the country – and Giles attended there a few years earlier. Each eventually made their way to LA and became staples of the local music scene. Along with Mann – who attended the University of Pennsylvania – they were part of a loosely affiliated group of musicians that sometimes shared billings and even occasionally contributed parts on each other’s records.

Mann, England, and Gonzalez formed an early version of The Rescues a few years ago, but it wasn’t until Giles joined a year-and-a-half ago that the group really began to cohere.

“It sounds cheesy but he kind of completed the group,” England said. “When the four of us were finally together, there was a balance in a way that wasn’t there before that allowed us to take it to a new level, where it is now.”

Certain patterns have seemingly become set in stone in the formation of pop bands. Basically, it goes like this: you have a drummer, a bass player, and either one or two guitar players and/or a keyboard player (horns are highly optional). There is one lead singer, maybe two occasionally.

This might explain why audiences may be somewhat disconcerted at what happens at The Rescues’ shows. All four band members sing lead. Instruments are shared. Giles frequently plays bass while at the same time kicking a foot drum. Sometimes an accordion makes an appearance in Mann’s hands, while England has taken to the ukulele with a gusto rarely seen in anyone with hit song aspirations (in this century).

“When all four of first started writing, three out of four of us when we played solo played acoustic guitar, and you just can’t have three jangly acoustic guitars all the time,” England said. “So I decided to pick up the ukulele because I felt like it was a good compliment. It’s in a much higher range and can kind of fill out a different sonic spectrum than the acoustic guitar. We are all striving to learn more instruments, so we can pass things around.”

“I debuted on drums at a gig at the Troubadour [last week],” she added. “I can’t even believe how fun it is to play drums – that is one of the things I’m trying to learn as well as bass. I highly recommend hitting stuff. It’s amazing.”

England said that the band’s openness to different instrumentation, as well as the many possibilities available in arranging two male and two female vocal lines, has allowed them to delve deeper into songwriting craft. All of their considerable musical resources are bent towards a single purpose. Everything is for the sake of the song.

“The cool thing is in most bands everyone has a very defined role,” she said. “There is a lead singer, there is a guitarist, and there is a bass player. For us, not as much…We blur the lines, and I think that brings the focus more on the song. It’s about the song and the vocals more so than so-and-so is wailing on the guitar solo, you know what I mean? It’s always about the song in our band, which I think is fun.”

Appropriately enough – given the band’s unusual musical freedom – the first song they wrote together is called “Let Loose the Horses.” On the very day the band first formally gathered to write, England received a phone call that inspired this song. Her brother, who lives in Colorado, had been forced to evacuate his home north of Boulder because of a fast-spreading brush fire. He called to tell her that he and his wife and their home had survived the fire unscathed. One image stuck with England, however – a neighboring rancher had been forced to let his horses run wild.

“The neighbor didn’t know if the horses were going to get burned up in the flames if they left them in the barn or in the fields, so they had to let the horses completely loose,” England said. “They opened up the gate and let them run, which is where that lyric comes from – they had to set them free to save them.”

“So I told my story when I got [to the band] because my brother had just called to tell me he was okay, and I was really emotional about it…The song just poured out after that because it got us thinking, what really matters in this world if everything you had did burn up? If you lose everything, what really matters? It is the people that you love, and that is the most important thing to focus on.”

It’s a strange thing that more bands haven’t used more voices over the years. When you think about rock history, some formative bands did so – think the Beatles, and later Fleetwood Mac and even Abba. There is a movement afoot towards a more vocally-based music – the Icelandic group Sugar Ros, for example, and Brooklyn’s Grizzly Bear both have strong choral elements.  The Rescues both harmonize and also exchange verses, such as the lovely “You’re not Listening” and it gives the music a more theatrical storytelling aspect. And then there is the haunting, a cappella “My Heart With You,” a choral song which somehow sounds both contemporary and ancient.

“We wanted to write something that was a cappella so we could focus on the voice, because several of us are former a cappella geeks,” England said. “We wanted it to feel kind of timeless but also from another time, so that is why the lyrics have the tone of being kind of a period piece, and some of the lyrics the way they are phrased don’t sound completely modern. But we just sat in a room and wrote the melody and all the harmonies together as we went and it just kind of flew out of us and we just kept singing it together until it felt right. It’s an unusual song because it doesn’t have a meter to it – all the phrases are kind of rubato, so we have to really pay attention to each other…”

“It really is an exercise in listening to each other and coming together, as one voice.” ER