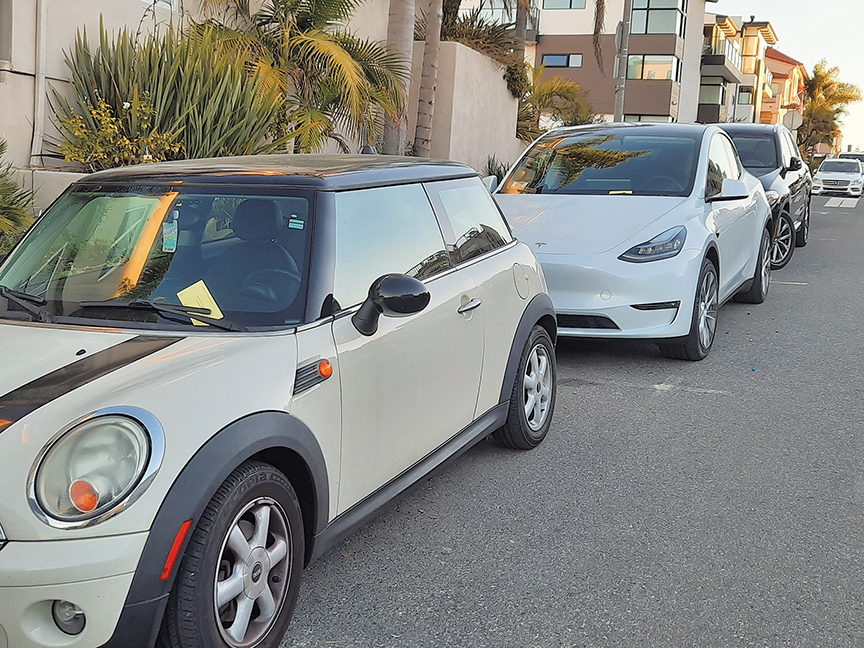 No, it wasn’t street sweeping day Tuesday morning when cars were ticketed on 10th Street in Hermosa Beach. It was “Turn you tires into the curb” day. Photo by Theresa Miller

No, it wasn’t street sweeping day Tuesday morning when cars were ticketed on 10th Street in Hermosa Beach. It was “Turn you tires into the curb” day. Photo by Theresa Miller 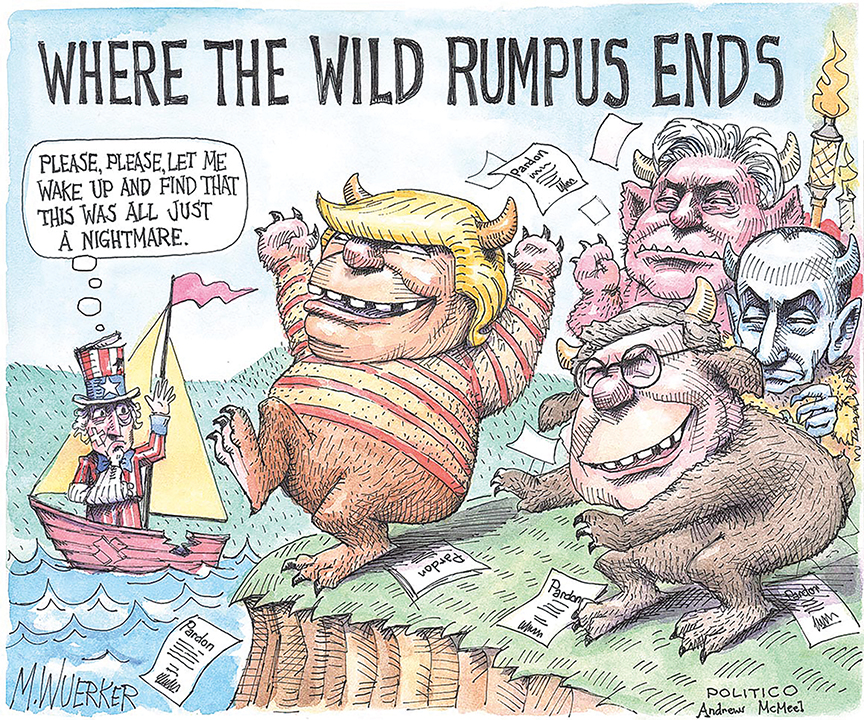 Thanks Easy Reader for your excellent story about Brianna Egan and the planned South Bay Parkland Conservancy, sponsored Redondo Beach Community Gardens (“Return home inspires plan for community garden,” ER Jan. 14, 2020). When COVID locked down the people of Redondo Beach last year, the yearning to connect with nature grew irresistible. Many residents dwell in apartments and condominiums and have no access to gardening space. Great things always begin with special people who have a vision. We have those people, we have that vision, and we have that plan. The hope is that the City Of Redondo Beach will partner with us and help us find that special first garden space in the city.

While the Public Health Orders have prevented outdoor dining for now, we are optimistic that outdoor dining will once again be permitted, as more people receive the COVID-19 vaccine, and we continue to take precautions to slow the virus’ spread. At the urging of local businesses in need of more space for outdoor dining, retail and personal services, we launched the Downtown Temporary Lane Reconfiguration Project last week. This project is designed to accommodate expanded space for restaurants’ outdoor dining decks when outdoor dining is again permitted. The project has temporarily reconfigured lanes on Hermosa Avenue between 8th Street and 14th Street, and on Pier Avenue between Hermosa Avenue and Valley Drive. This is a temporary change in traffic patterns to help our local businesses. We will monitor this new configuration and make adjustments as necessary. City Council committed to maintaining the project for only six months, at which point it will be reevaluated. We ask the public to join us in supporting our local businesses as they strive to keep their doors open and their employees working during these challenging times.

These are incredibly difficult times in education and it’s more important than ever that we elect school board members who have the experience and leadership to hit the ground running.  Rachel Silverman Nemeth and Dan Elder have been active in the Redondo Beach school community for years and know what it takes for our children to thrive. They have been endorsed unanimously by every member of the Board of Education, along with many other school community leaders. We’re all struggling right now but with Silverman Nemeth and Elder on the school board we’ll be able to get through this and come out stronger together.

I am writing in support of Rachel Silverman Nemeth and Dan Elder for Redondo Beach School Board. Both have the experience and leadership needed for the position.  They’ve been active in our school community for years and have been endorsed unanimously by the school board. I’ve seen their dedication to helping our children. Elections have consequences so I urge everyone to vote for Rachel Silverman Nemeth and Dan Elder.

In writing about Republicans, the Easy Reader News reached out to some disreputable types in the South Bay. (“Beached party,” ER Dec. 24, 2020).  John Paul Tabakian and Stacey Armato did not switch affiliation out of any sense of principle. They did it because they wanted to salvage their dwindling political careers and diminished influence in the community. I applaud a number of readers calling out Easy Reader’s corrupted bias. One reader correctly pointed out that Republicans increased their numbers on the city council in liberal Manhattan Beach. The report neglected to mention that Republicans have expanded their numbers on the Torrance City Council, as well. No wonder local print media is going bankrupt. Last of all, former Congressman Steve Kuyendall is the epitome of the “swamp” that Donald Trump was elected to clean out. Most retired Congressmen go into consulting or lobbying, and any politician who attempts to cut the size, scope, and influence of the federal government in our daily lives hurts their pocketbooks. Of course, Kuykendall supported Joe Biden.

School Boardmember Brad Waller voted in support of another pause for in-person learning, despite the district showing that an overwhelming majority of the parents would send their kids back. I am not sure why he would ignore parent data indicating that we’d like to go back, but I am certain that many parents are tired of this board ignoring the will of the parents. We are tired of Waller kicking the can down the road and not proactively providing solutions to mitigate the problems. We are tired of him doing nothing in return for our patience. We are tired of him prioritizing Center for Disease Control policies over our children. Endless thank you’s to Boardmember David Witkin and Boardmember Brad Serkin who pushed the administration to follow the data and get our kids back in school.Other schools have figured it out — while our kids are left behind. We need new leadership that will fight endlessly for our children to return safely. We don’t need more of the same. Please vote for Margo Trone and Rolf Stutzenberg for Redondo Beach School Board.

Dr. Pissed off implies that the new vaccines are the inevitable result of a decade-long program, and that therefore the current push to success was an insignificant factor (Dr. Pissed Off: Vaccines,” ER Dec. 24, 2020) Clearly he’ll grasp for anything to diminish Donald Trump’s achievement, probably the most important of his promises made and kept. Yes, there is an existing foundation of medical knowledge; let’s remember to credit Louis Pasteur, but what was done in a few months needed a forceful project leader with the management skills to work with the private sector. We may yet have even better vaccines, but they will need to thread through the thicket of red tape before they can be applied universally. Boris Johnson’s British government is already implementing an American-developed vaccine. Apparently our British brethren give priority to saving lives over mollifying their bureaucracy. I don’t doubt Dr. pissed Off was among those who sneered at Trump’s prediction of a proven vaccine by year-end (it came in early November). Dr. Tony Fauci told us not to expect anything before the end of 2021, and then with only 60 percent effectiveness. Others pointed out that vaccine development ordinarily takes five years and alluded to a Presidential fantasyland. Also, he wrote at length about the logistics of distribution. My suggestion is to withhold from the vaccine-doubters until the late date of their predictions, and maybe then supply them a dose of 60 percent effectiveness. We now have been given in record time the only practical means to end the virus horror, but Dr. Pissed off is “appalled at the current administration.” The title “Dr.” carries a new irony: you sicken me.

I know as a politician (not a statesman or a servant of the people), it is essential that Representative Ted Lieu (D-33rd District) further his career by leading an attempt to impeach President Trump for a second time. There is no basis for the action, but his grandstanding could help his political aspirations and get his face on television. Meanwhile petty things like crime going up all over his Congressional District do not have to be addressed. After all political ambition is more important than the people who suffer from policies developed by his Democratic party run by arrogant elitist who are totally out of touch with those of us who see through the never ending hypocrisy of Sacramento and Washington D.C. Unfortunately both political parties are in a power struggle while the people suffer. Lieu did not debate his last two electoral opponents. The only possible good thing he and his cronies may accomplish is awakening the righteous indignation of the common folks.  I am not running for political office.  I cannot afford it. But, I would be willing to debate Lieu on issues that are important, but take a back seat to his lust for power.

In 2018, Councilman Nils Nehrenheim demanded the City pay for his defense after he vandalized a Riviera Village restaurant. Nehrenheim’s defense failed last year because such shameful behavior is indefensible. The cost to Redondo Beach residents was probably close to $100,000 or more for his defense. This is money we sorely need to maintain City programs. Even worse is the long-term cost of the bad faith he created with the Redondo Beach business community. Redondo Beach residents should not have to pay for Nehrenheim’s outrageous conduct. The Mayor and Council have a fiduciary duty to hold Councilman Nehrenheim accountable by making him reimburse the City for his defense costs. Redondo Beach District 1 voters will have an opportunity to hold him accountable by voting for a much better candidate on March 2.

It’s the quality of life

The hacks who supported CenterCal shouldn’t be allowed to even run in the March election. They’ve sued the City and tried to destroy our waterfront. How can anyone support them? We also need to get a slow growth development majority, so unfortunately for District 4 Councilman

John Gran, he needs to be ousted. It’s a quality of life vote.

Wouldn’t it follow that the Beach Cities Health District could cover some of the cost for Redondo (“Redondo Performing Arts Center proposed for fascinating center,” ER Jan. 14, 2020)? Time to speed up the protocol and save some lives, now.

author2, Letters, Letters to the Editor