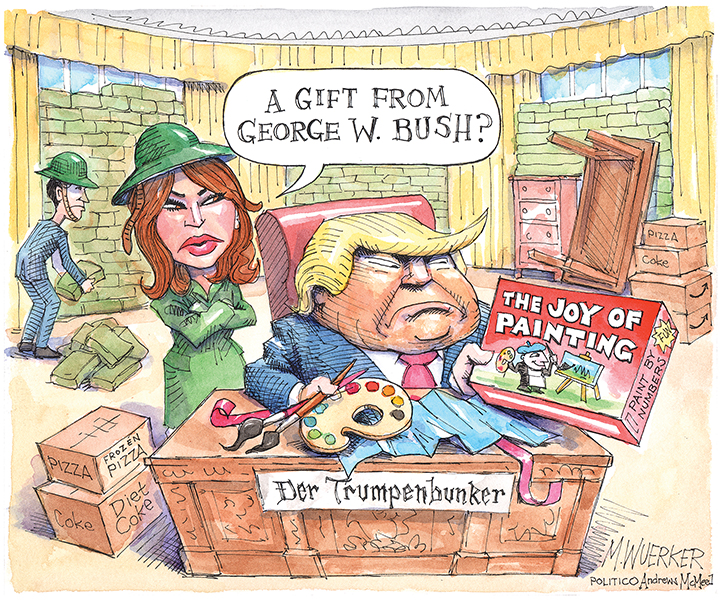 Bumps in the road

I’d like to thank the person who took it upon themself to place small speed bumps at the widely-ignored stop signs at the end of our walk street on 4th and Crest and I wonder why the city, the following day, tasked a crew to remove those glued-down speed bumps. Crest is an alley with stop signs in both directions. Those of us who live near this intersection know there are 12, small children living in the area. I’ve seen kids break free from their parents and rush into the intersection. Of the drivers using Crest, easily 80 percent barely slow down and many don’t even touch the brake pedal. I’m sure if the city decided to put speed bumps at this location just enough to focus a driver’s attention from their texting as they blow through the stop signs, it would have to employ the city engineer, a crew of four, and cost $100,000. That versus whatever it costs to buy some rubber speed bumps and lay them at a location where the Range Rover drivers are required to stop. I hope I’m not around to see any of the kids hit by one of the entitled jackasses at the wheels of those cars when the city could have had an impact for a couple hundred dollars. Talk about Blue Zones.

Hermosa Beach Council Member Stacey Armato has cost the city plenty with her petty and personal fight with a local gym and her inability to solve simple problems (“Fangary fanned second time by colleagues in mayoral vote,” ER Nov. 12, 2020). Also, it is Council Member Hany Fangary’s job to evaluate City Manager Lowenthal and not to baby her. If Armato and Lowenthal can’t take the heat, they should resign. They should not, however, be disrespectful of Councilman Fangary. We are happy with him. He speaks for us and should be treated properly as our representative. As far as I am concerned, he is the rightful mayor.

Isn’t Hermosa Beach Council Member Fangary of Mideast descent? So what’s going on in Hermosa politics? Are we now into ethic and religious factors in deciding if someone can do the job? And who gave Council Member Stacey Armato this power? I thought we voted for the guy.

Suzanne Hadley is poised to become mayor of Manhattan Beach on December 1. The position is a traditionally rotating post, which still requires a formal vote by the council. I encourage the members of MB city council to vote no. If Hadley becomes mayor, I am afraid she will ignore mandated lockdowns and restrictions. Far from the plain-speaking gal who stands up for underrepresented parents and small business owners that she purports to be, she is a savvy politician actively pushing her Fox News ideals on our town. She has been working non-stop to open schools and downtown businesses ahead of State and LA County orders. On May 19,, Hadley participated in a flag waving demonstration outside of city hall to open downtown by Memorial Day. “And I tell you there are people from the state of Illinois streaming over the border into Wisconsin to get their nails done, their hair done, … and have a restaurant meal,” Hadley said. “So I would like people streaming in our city to take advantage of our retailers and our residential businesses and our restaurants,” she told the crowd.

On June 11, Hadley said regarding opening the Manhattan Beach pier “I would say it’s not defiant, I would say doors are open and unlocked, all we need to do is walk out of the cell. The jailers are gone.” I would say her proposed actions were very defiant. On July 1, our mayor-to-be said this in her infamous interview on the pier, “This is not the plague. I don’t know anyone who has died of COVID. Maybe you do. We can prevent drunk driving by banning alcohol.” Hadley continued, “We can prevent car fatalities on the highway by closing our highways or preventing cars. The role of society is not to prevent death.” On Oct 10, Hadley commented on a Next Door post,“I’m supporting [school board candidates] Heather de Roos and Cathy Graves because they will push to reopen schools faster than the other two…”

On November 18, mayor pro tem Hadley served as an advisor to a rally to reopen schools immediately, despite the fact that schools are preparing to open anyway and Covid cases are on the rise. If you agree that Suzanne Hadley should be passed over as mayor, please email the city council urging them to vote “No” at  CityMb.info.

A democracy requires the citizens to be able to vote in their leaders and the vote must actually determine who takes office and rotates as Mayor. There is a campaign by a vocal minority of residents, non residents and special interest groups to deny Councilmember Suzanne Hadley her rightful place as mayor of Manhattan Beach. For 50 years it has been the tradition for every councilperson to hold a nine-month rotation as mayor. This rotation helps keep politics out of our non-partisan city council. The rotational transfer of the mayor’s title from Richard Montgomery to Hadley is on the agenda for the December 1 council meeting because of an organized tactic to exclude Hadley from the mayoral role because of her opinions and views. With all of the questions around the fairness of our elections, denying Councilmember Hadley the opportunity to assume the mayoral position undermines the voice and vote of the community. Hadley will be an outstanding mayor and we will benefit from her experience and leadership and I trust she will represent Manhattan Beach well. I look forward to a peaceful and democratic transfer of the mayoral responsibilities to Councilperson Suzanne Hadley

Some people consider the position of Manhattan Beach mayor as a “ceremonial” and “honorary” title. We disagree. The mayor is the lead political representative of the city who needs to communicate scientific evidence and not personal anecdotes in making public statements. The mayor must have the ability to thoughtfully and deliberately articulate policies and guidelines that can impact health care for all of us.  Our current mayor, Richard Montgomery, has proven he can navigate this pandemic effectively and should continue on as mayor. Given the gravity of the current situation, we recommend the mayor position not change in the middle of an officially declared national public health emergency, per the Department of Health and Human Services.  In these challenging times, it is imperative that the City Council lean on its most experienced elected members and choose the leader who can best collaborate with local and state policy makers in decision-making and rely on science, physicians, and health care officials.

As concerned physicians and residents of Manhattan Beach we encourage the Manhattan Beach City Council to support decisions made by LA County Health officials during this pandemic. Many hospitals in the U.S. are currently overwhelmed as COVID rates continue to dramatically rise. The efforts each citizen makes in wearing a mask, keeping six feet away from others and avoiding group gatherings will prevent COVID infections and ensure that a hospital bed will be available for your loved ones, if needed, in the coming months.

Have you noticed when local restaurants reopen they do not necessarily bring back their long term employees. Instead, they use the government money to bring in new and inexperienced people. Not only is this wrong, it is disappointing to their loyal customers. Maybe this pandemic is allowing us to see the true character of some of these restaurant owners.

Kids paying to not play

I have no skin in the game when it comes to the decision to reopen our schools in Manhattan Beach. I graduated from Mira Costa High School. Neither I nor my friends have kids. Since this pandemic started, I have been against reopening schools for the sake of everyone’s health (Parents rally in Polliwog park to reopen schools,” ER Nov. 19, 2020). Without supporting science or facts, it would have been irresponsible to do so. Now, eight months later, science and statistics support reopening. And with the potential of a vaccine coming out before the end of the year, we should be discussing a safe plan to reopen our schools instead of delaying that discussion over petty nonsense. I attended the rally to reopen our schools at Polliwog Park this week and it opened my eyes to just how much students want to be back in the classroom. After two Zoom school days with my 6-year-old niece, it was clear to me that keeping the schools closed is robbing these children of everything important about an education. Is reopening scary? Of course. But if we don’t have the courage to start implementing a plan to safely reopen our schools, it will be the kids who will suffer the most for our negligence.

This should never be about politics. The residents of Manhattan Beach have always taken personal responsibility for the health and safety of their families and our community. Let’s start the discussion and have our council take the necessary steps to get us to a safe and comfortable place to reopen our schools.

Half a decade ago, BCHD paid $2 million of our tax money to Blue Zones to buy into their program. Since then BCHD has committed quite a bit more of our tax money to having a director, staff, and ample advertising for Bluezones. So why is it that BCHD ignores the core message of Blue Zones? From 2012 to 2019, Blue Zones published a string of articles on stress reduction, and how stress is the “silent killer.” BCHD and South Bay Hospital have been the largest source of chronic stress to surrounding residents since the late 1950s. The hospital was small, only 100,000 or so square feet and minimized its community impacts by being centered on a 10 acre parcel. But then, it leased part of the taxpayer-owned campus until 2060 to private developers to build office buildings. That increased traffic and stress, and the new buildings were built on the west edge of campus up against residential neighborhoods, increasing the size to 300,000 square feet. The current plan is to triple the buildings to 800,000 square feet, build them on the very edges of the campus, again, up against homes. And by building 6 and 8-story buildings, all privacy will be lost in the surrounding neighborhoods – vastly increasing chronic stress impacts. Less than 5 percent of the planned development is targeted at the South Redondo Beach residents who endure 100 percent of the negative impacts and stress from BCHD. In both his most recent newsletter, and in FAQs, BCHD CEO Tom Bakaly has acknowledged BCHD has damaged the surrounding neighborhoods and increased stress and fear. Tripling the size and chronic stress imparted on local residents in order to serve 95 percent  residents from outside of South Redondo Beach is clearly a failure by BCHD to walk the talk of its multi-million dollar expenditure of our tax dollars on Blue Zones.

author1, Letters, Letters to the Editor