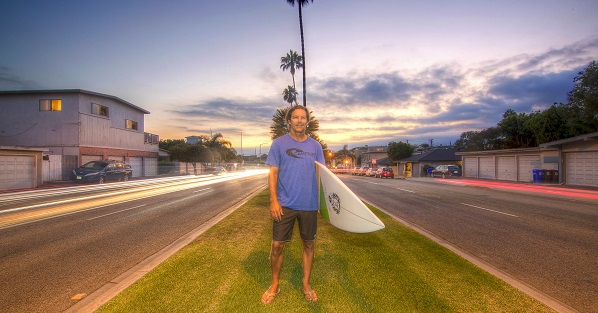 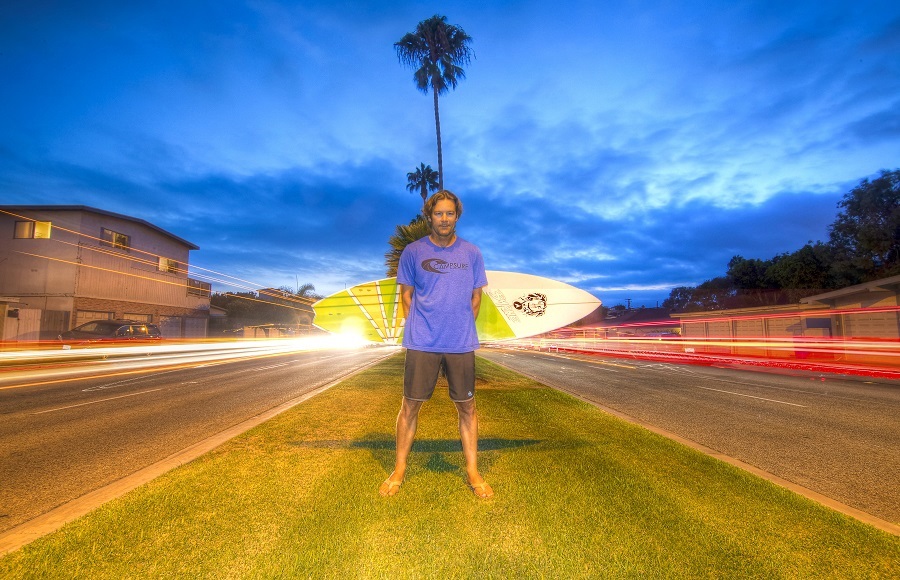 Chris Brown’s passion for the beach lifestyle has not wavered since his youth. Photo (CivicCouch.com)

“My parents Kyle and Sue were beach people,” Chris Brown said. “One of my earliest memories is of bodysurfing on my dad’s back. When I was young, I was obsessed with being at the beach.”

The obsession never left him. Instead, he made a profession of it.

He built a career around sharing that obsession with others, both kids and adults. He also played traditional youth sports, including baseball, basketball and soccer while attending North School and Hermosa Middle School. But at Mira Costa High School, he focused on volleyball. And when he went to USC, where his father had played baseball, he joined the surfing team. 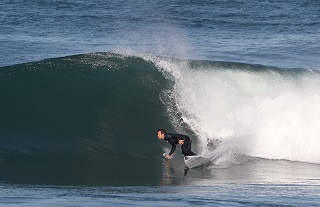 Shortly after graduating, he and former Mira Costa classmate Jimmy Miller, who had just graduated from Cal Berkeley, gave themselves a graduation present.

“We went on a surfing trip to Indonesia. We found an insane spot by accident, with no one else around. I didn’t know waves could get that good,” he recalled.

They were taking a boat trip from island to island when the motor broke, forcing the boat to drop anchor off a small island.

“We looked over and saw this spot with great shaped waves that kept getting bigger and bigger,” Brown said. “We were in the right place at the right time. When we returned two weeks later, the waves were just as good.”

Over the ensuing years, Brown would surf in South Africa, Australia, New Zealand, Micronesia, Mexico and Hawaii. But Indonesia remains his favorite spot.

“Traveling has been an education for me almost as important as going to school,” he added.

In 1997, Miller decided teaching surfing would be a good way to finance future surf trips.

CampSurf, which began as a seasonal surf camp with private lessons and corporate events, celebrated it’s 20th anniversary this summer.

After Miller died in 2004, following a battle with mental illness, the Miller family asked Brown to continue running the program.

In addition to managing the camp, Brown serves on the Board of Directors of the Jimmy Miller Memorial Foundation, whose Ocean Therapy program uses surfing to provide occupational and recreational therapy. The program has proven effective in assisting people with Post Traumatic Stress Disorders (PTSD), traumatic brain injuries, and other emotional, mental and medical conditions.

“The foundation has grown beyond what we ever dreamed of,” Brown said.

Ocean therapy, Brown said, is just one of the aspects of surfing that has helped the sport move past the stereotype of the surfer/beach bum made famous by Sean Penn’s role as Jeff Spicoli in Fast Times at Ridgemont High, which was filmed at Redondo Union High.

“The sport has become more mainstreamed and the pros have become clean-cut, elite athletes,” he said. 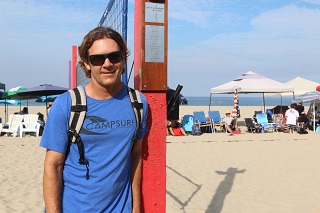 When not in the water, Chris Brown serves as CBVA President and tournament director of Hermosa Beach volleyball tournaments. Photo (CivicCouch.com)

When the surf was flat beach volleyball provided an opportunity for Brown and his buddies to continue hanging out at the beach.

Brown began playing in local tournaments in his teens, including those run by the California Beach Volleyball Association (CBVA).

The CBVA was founded in 1962 to unite local beach volleyball communities and to coordinate local tournament schedules.

“I won at every level on the CBVA and have great memories of battles on the court,” Brown said.

One summer, Brown became friends with the CBVA tournament director at Playa del Rey and asked him why there weren’t more tournaments in his hometown.

“Hermosa Beach had fallen off the map at the time, so I badgered him about going to Hermosa,” Brown recalled. “He asked me ‘Why don’t you do it?’ Finally, after two years of considering the offer, I learned the ins and outs of being a tournament director and began running Hermosa tournaments in 1999.

“I love the organization. It’s a whole machine run by great people. We’ve brought Hermosa Beach back into prominence on the volleyball circuit. It’s thriving with adults whose life goal is to earn an A or B rating.”

“When players come up to me after a tournament, shake my hand and say thanks, it makes it all  worthwhile,” Brown said.

In 2005, Brown became president of the CBVA, a position he continues to hold. He also sits on the Nominating and Governance Committee of USA Volleyball, the governing body for U.S. Olympic volleyball.

As president of CBVA, Brown has striven to keep the tournaments affordable and to bring the organization into the digital age.

“In 2005 we didn’t have online registration,” Brown said. “On Friday nights, I’d listen to phone messages and chicken scratch on a piece of paper the names of players who called wanting to play in that weekend’s tournaments. Now we’re on the cutting edge with our website.”

Manhattan Beach native Kevin Cleary has known Brown for many years. Cleary became the first president of the Association of Volleyball Professionals (AVP) in 1983 and was inducted into the CBVA Beach Volleyball Hall of Fame in 2010.

“Chris is the ultimate old schooler and totally committed to the beach lifestyle,” Cleary said. “He’s a surfer first but loves his volleyball, too. He has excellent people skills and has been invaluable to both CBVA and the Beach Volleyball Hall of Fame committee. His work and recreation run hand in hand. The man is a lifestyle technician.”

Brown believes the biggest change in beach volleyball came after 2000 when rally scoring was adopted to accommodate television schedules.

“The change was not for the best, but the sport is so great it survived,” Brown said. “I would like to see the game go back to side-out scoring (where teams need to be serving to score a point). Champions really earned their titles after a grueling tournament with longer matches.”

Brown feels the AVP took a big step forward this year by returning to Hermosa Beach, increasing the prize money and implementing the point freeze rule The new rule calls for side-out scoring when match-point is reached. Let serves (when a serve touches the net on its way over) are not be allowed during that period and the server gets one re-serve. 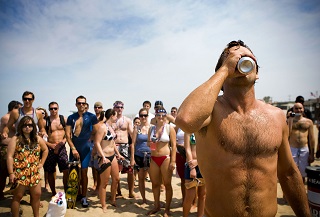 “The introduction of NCAA women’s beach volleyball was a also game changer,” Brown said. “I’m astounded by the high level of play girls have at a young age.”

Brown said his most memorable experience as a player came during his second summer of competition.

“I made the finals of a Solstice tournament beating three pro teams in a row,” Brown said. “Scott Ayakatubby was an idol of mine and we played him. I blocked Ack a couple of times and to have a chance to play against him, let alone beat him, was a big thrill.”

Brown returns to the sands of Hermosa Beach each 4th of July for the annual Ironman contest, which he has won five times.

The event requires participants to run one mile, paddle one mile, then chug a 6-pack of beer. The first to finish without vomiting wins.

“I love competing and it’s just crazy exertion,” Brown said. “There was a time when some people in Hermosa Beach wanted to shut it down, but calmer heads prevailed. It draws a large group of people, most of them friends, who have a good time without hurting anyone.”

“I had a lot of friends who paddled in the race and it had been a goal of mine since I was young,” Brown said. “The first year when I got to the Manhattan Beach Pier, I was euphoric. There have been countless times when I have leaned on that experience to help me face obstacles in my daily life.”

Brown will begin a new adventure this month when he marries Laura Sikora on September 29.

“I’m 48 years old and had never been engaged. But I reached a point in my life where I felt I had matured enough for the responsibilities of being a husband and father. I so happy she came into my life, Brown said.