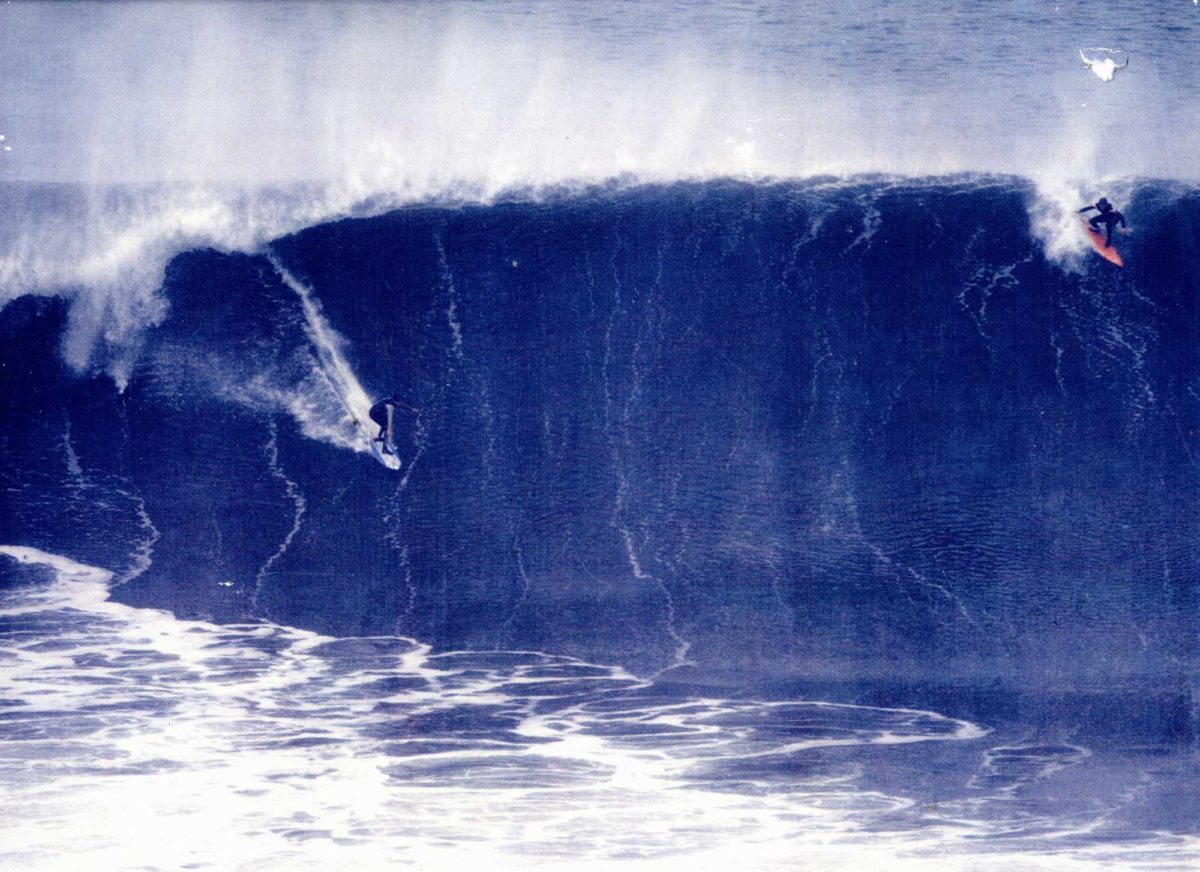 Kip Jerger (left) riding a 6-foot-4 Kanoa board and Sal Ferrara on a big winter day at Indicator in 1982. Photo courtesy of Kip Jerger

From rescued to rescuer

In 1977, Kip Jerger was awarded the Los Angeles County Lifeguard Medal of Valor for rescuing a fisherman off the rocks at White Point in San Pedro. Jerger was stationed at the Lifeguard tower overlooking the rocky point. “Lifeguard Recurrent” magazine printed Jerger’s account of the rescue:

“There was a hurricane off of Mexico and the waves were 10-feet-plus with 20-foot faces crashing on the rocks. The time between sets was long — 15 to 20 minutes. A set started forming on the outside so I grabbed the megaphone and warned the fishermen to move off the rocks. But a guy in a plaid shirt with a big Afro ran down the rocks to free his snagged fishing line. Then I heard a female scream. I grabbed the binoculars and spotted the man floating face down. I called Cabrillo headquarters for backup and hit the jetty, running barefoot across the jagged rocks. After diving in I grabbed the guy by the hair, pulled his face out of the water and rolled him over. He was at least 230 pounds and foaming at the mouth. The first wave of a huge set broke on us. I lost my grip and we both crashed into the rocks. I grabbed him and lost him three more times during the set. Then I got pinned in an opening in the rocks. I was gasping for air. I finally got free and scrambled up the rocks.

When the water receded, I looked down and saw the fisherman’s plaid sleeve through a hole in the rocks. He was trapped in an underwater cave. I ducked down into the water, grabbed his arm and held him in place as the next set came in. ‘The lifeguard is drowning!’ I remember hearing someone scream. I pulled him out of the front of the cave by grabbing one of his leather boots. As we were bobbing, I could feel another set on its way. I knew this was my last opportunity to get Wallace up on the rocks. His buddy didn’t know how to swim and that’s why he didn’t help when Wallace first fell in. He helped me pull Wallace onto the rocks. When we got Wallace to a safe spot, I started CPR.

“My back up, Kenny Atkins, arrived and took over CPR, and I began to treat Wallace’s numerous body lacerations. As I did this, I went into shock. LA City Fire arrived and Wallace and I were both transported to the hospital. I had a fractured elbow and crushed hip.

“The fisherman returned to White Point a few weeks later to say thanks and that he had no permanent injuries. I saw him return to fish a few times after that.”

For this and his many other rescues and for his lifetime of surfing and teaching surfing, Jerger will be inducted into the Hermosa Beach Surfer Walk of Fame on Saturday, April 28, along with

Inspired by the sea

Jerger’s lifeguard career was inspired in part by the lifeguards who rescued him. In 1958, a 5-year-old Kip Jerger was rescued at Venice Beach by Los Angeles County Lifeguard Dick Orr, who took a liking to the spunky kid who wasn’t afraid of the ocean. Later that summer, Orr took Jerger tandem surfing on a heavy, hollow kook box. By then the 5-year-old knew he wanted to become an ocean lifeguard. 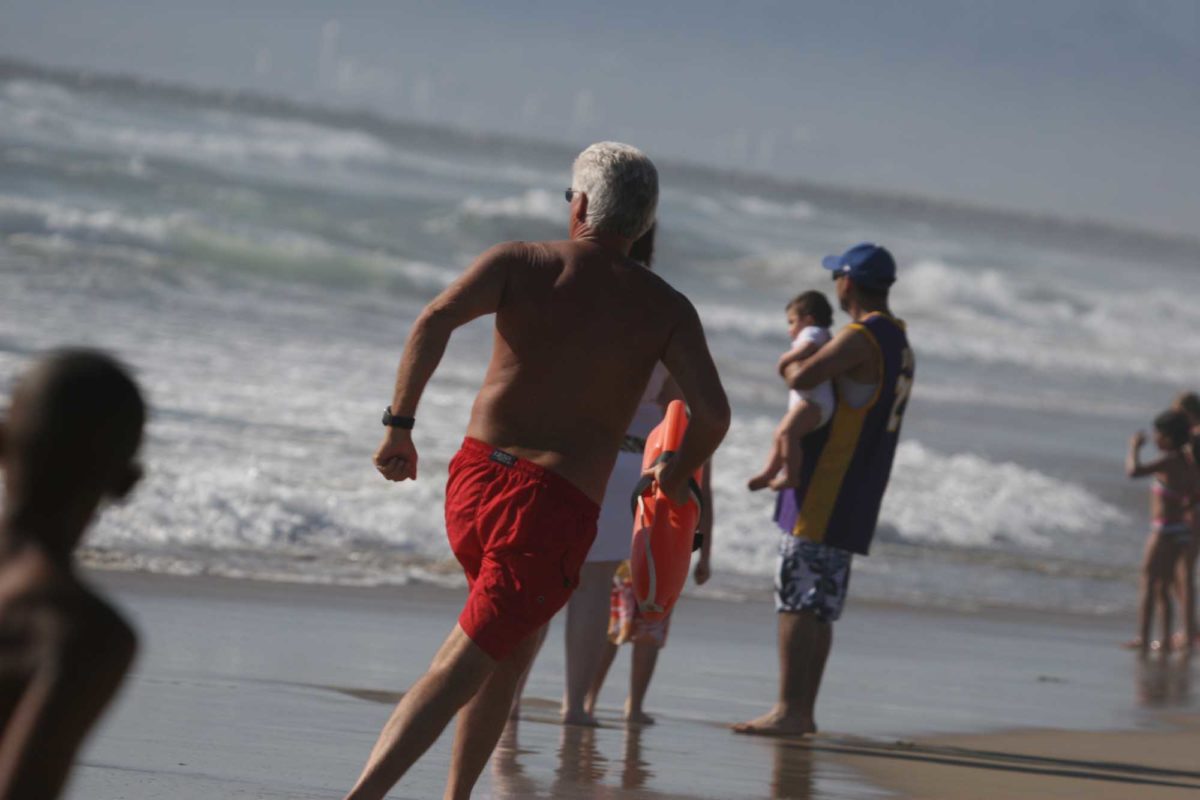 When he was 17, Jerger was rescued by lifeguards again,  this time while surfing his own, new maroon Becker surfboard during a big day at Rincon. Los Angeles County Lifeguards Mike Stevenson, Alfred laws and John Baker, who was also in the surfing saw Jerger get tossed on the rocks. After pulling him to safety, they drove him home to the South Bay in Baker’s VW bus.

Four years later, in 1974, Jerger realized his boyhood dream of becoming a Los Angeles County Lifeguard, a career that over the next four decades would encompass professional surfing, surfboard building and a surf camp that welcomed the blind and underprivileged.

Jerger was delivered by his father at their home in San Pedro. “My grandfather Joseph A. Jerger helped. He was a country doctor who wrote a bestseller called ‘Doctor here’s your hat.” It was a controversial book about doctors charging too much money. It got him kicked out of the American Medical Association.” Jerger said.

He grew up in Palos Verdes, where he went to Miraleste High School and in 1970 won California Scholastic Federation Surfing Championships.

“My brother Tuzo and I started surfing the Cove and Royal Palms. We loved Lunada Bay and  Indicator on big days.”

At El Camino College he majored in business and art while playing water polo for legendary coach Rudy Krune.  Then, in 1974, he and Tuzo opened Kanoa Surf, the first surf shop in Palos Verdes. It was also one of the first mail order surf shops. They soon opened a second shop in Manhattan Beach. 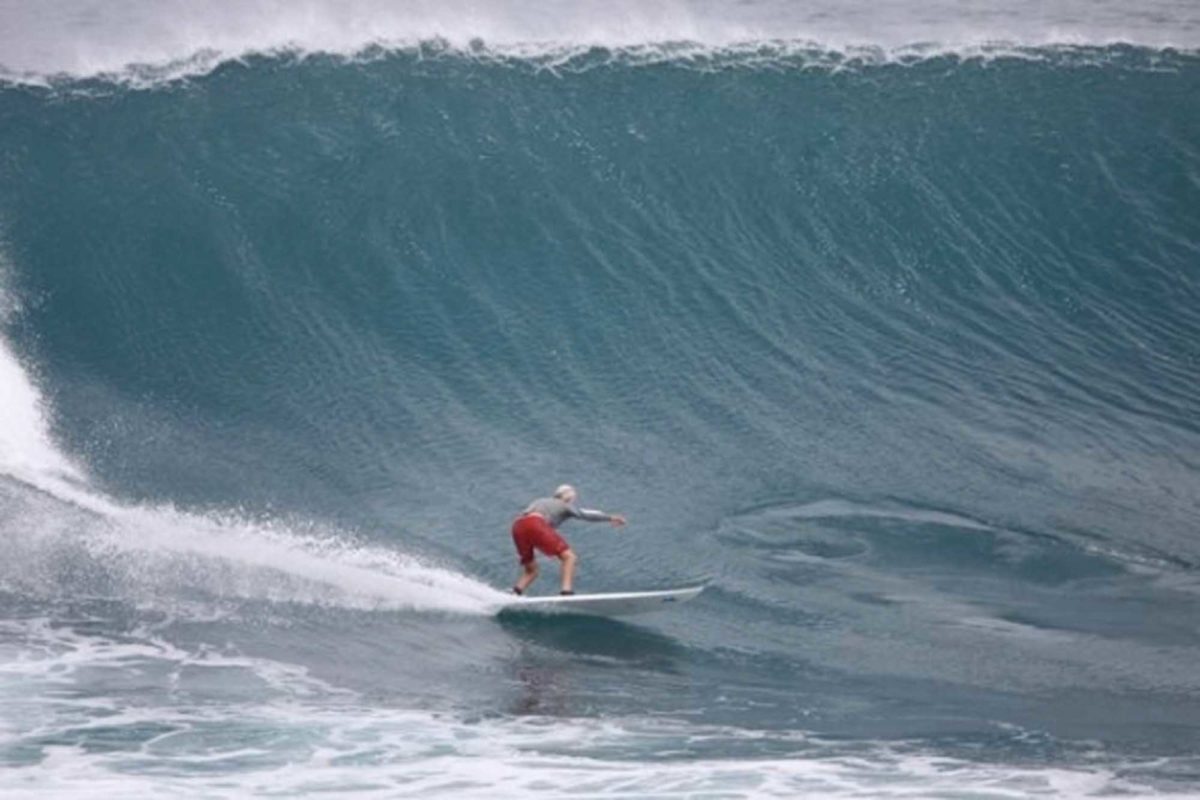 One of the team’s most memorable experiences, he said was at Jeffrey’s Bay, the South African point break, made famous a decade earlier by the film “Endless Summer.”

“Only 50 people lived in the whole town. South African pro Shaun Tomson, a few other pros and us were the only surfers. The surf was perfect 6- to 10-feet for a week. Tomson, still says that was the best Jeffreys Bay he’s seen. The day we left it was 8-foot and perfect with only one guy out. We were too tired to surf anymore,” Kip recalled

In 1982, Jerger won the Catalina Classic Paddleboard Race. It was the first year the 32-mile race from Two Harbors to the Manhattan Beach pier had been run since bad weather forced the 1961 race to be stopped. He raced a board he built with sponsorship from Crenshaw Transmission, whose logo of a transmission covered the deck. The board is in the paddleboard collection at the Hermosa Beach Historical Museum.

In 1983, he and his brother sold their surf shops and he went back to lifeguarding, modeling and film work. He worked as a stuntman on Baywatch for three seasons.

During this period he became a four-time Lifeguard National Ironman Champion.

In 2001, he founded Kanoa Surf School in Manhattan Beach and quickly expanded to Venice, Malibu and Huntington Beach.

Jerger’s induction in the Hermosa Surfers Walk of fame will reunite him with the three lifeguards who saved his life at Rincon and helped inspire him to become a lifeguard. John Baker was inducted into the Hermosa Walk of Fame in 20076 and Alfred Laws and Mike Stevenson were inducted in 2007.