Mike Doyle was as smooth on land as he was surfing by Mike Purpus Editor’s note: Hermosa Surfing Walk of Fame inductee Mike Doyle was a champion longboarder and tandem surfer, an author and painter and co-inventor of the soft top surfboard and surf wax. Doyle passed away from ALS on April 28, […]

Is bad blood from the ‘60s keeping Bay Cities out of the Malibu invitational?

The Fourth Annual Subaru Pacific Hotdogger Surfing Championships drew 50 of the top-rated longboard surfers from around the world to the south side of the Hermosa Beach Pier on Saturday. The sun was out and so were plenty of fast, glassy, 3-foot tubes to ride.

by Mike Purpus Neither the surf nor the surfing at the Hermosa Beach pier on Saturday matched that of the Van US Open, taking place the same day in Huntington Beach. But the stoke was just as high. “I love this contest,” Christian Steutzman said of the International Surf Festival surf contest. He had reason […]

Breakwater: the early days Longboards, no wetsuits and already hierarchical

Photos by Leroy Grannis by Mike Purpus The first time I rode the Redondo Breakwater was the winter of ‘62. I was a 12-year old-grom. I paddled down from 30th Street in Hermosa. A lifeguard truck spotted me at 26th Street and followed me the rest of the way. The Breakwater was a WPA (Works […] 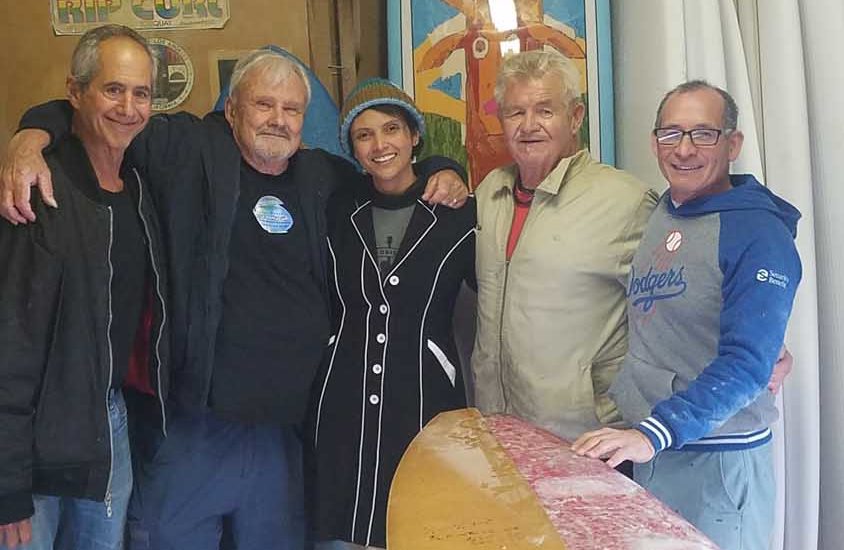 by Mike Purpus At 71, Corky Carroll is still the coolest surfer around. The three-time International Surfing Champion, his lovely wife Raquel, Blue Mango Surfboards founder Joel Saltzman, and old friends John Joseph, Joey Lombardo and I had lunch at the HT Grill in Redondo Beach last month. I hadn’t seen Corky for 19 years, […]

by Mike Purpus Every Saturday before Christmas, Nick Weber presents the Ratopia Surf Classic at Torrance Beach. The contest was founded in 2005 to raise funds for 22-year-old local surfer Denny Bales, who was diagnosed with Hodgkin’s Lymphoma. Since the contest’s ounding, it has raised $150,000 for the Leukemia and Lymphoma Society. Every year Santa […]

Big days at the Hermosa pier

by Mike Purpus During a recent big storm swell, the south side of the Hermosa Beach pier had the best ridable waves in the South Bay. Photos taken by Brad Jacobson confirmed it. But surfers had such a difficult time paddling out that some were rumored to have jumped off the pier If true, it […]

by Mike Purpus Ryan Hughes started boogie boarding before he could walk, then skim boarded and at 11 got his first surfboard. The fair-haired, freckle-faced, 5-foot-11-inch Redondo High senior learned to surf from his father Daren on an 8-foot-4 Becker at Torrance Beach. “The board was really old. I think it was made in the […]

Up-and-coming surfer talks boards, ‘California’s answer to Pipeline,’ and the day he became a reef fillet

A new format for the International Surf Festival Surfboard contest was complimented by a powerful, head high swell at the Manhattan Beach pier on Saturday. Contest director John “JJ” Joseph did away with the conventional age and shortboard divisions in favor of an open longboard contest.

From rescued to rescuer by Mike Purpus In 1977, Kip Jerger was awarded the Los Angeles County Lifeguard Medal of Valor for rescuing a fisherman off the rocks at White Point in San Pedro. Jerger was stationed at the Lifeguard tower overlooking the rocky point. “Lifeguard Recurrent” magazine printed Jerger’s account of the rescue: “There […]

by Mike Purpus The annual Ratopia Surf Classic was founded in 2005 to raise funds for 22-year-old local surfer Denny Bales was diagnosed with Hodgkin’s Lymphoma. Over the ensuing decade, the contest has raised $127,000 for the Leukemia and Lymphoma Society, which has recognized contest organizer Nick Weber with its de Villiers Society Award. The […] 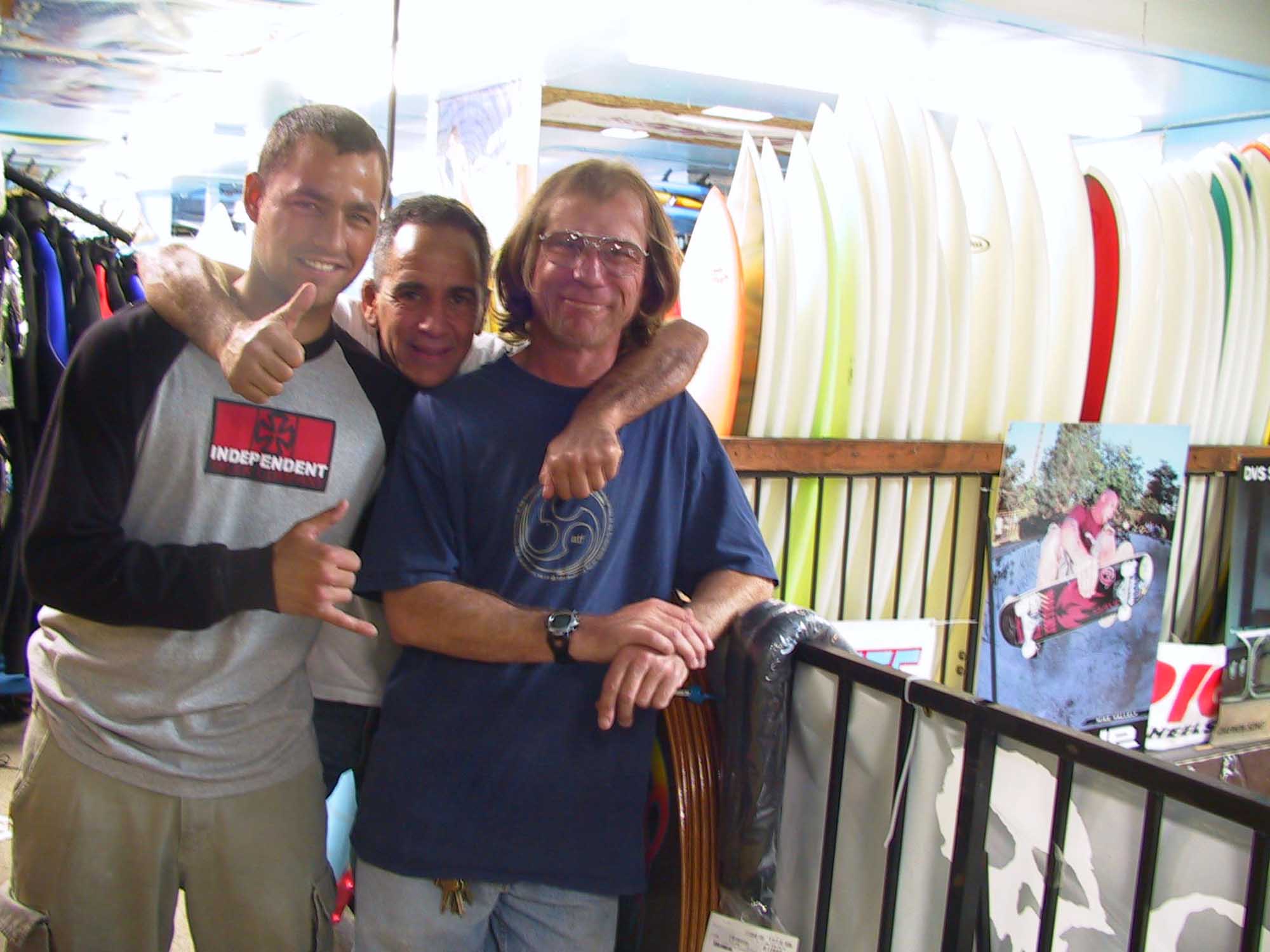 by Mike Purpus Eddie Talbot is celebrating the 45th anniversary of ET Surfboards and Surf Shop, arguably the most successful surf shop in the South Bay since the late 1960s. In the mid-Sixties, Eddie and his best friend, Pat “Gumby” Ryan, were groms on the Greg Noll Surf Team. Even then, Eddie had a pretty […] 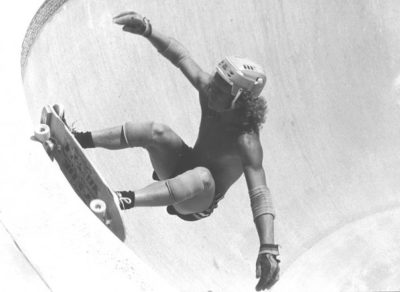 by Mike Purpus Former professional skateboarder and surfer Ty Page passed away last Thursday, just two days before the memorial paddleout for Redondo Beach surfboard shaper Don Swift. Page passed away, at age 59, at his home in Park City, Utah. Both he and Swift succumbed to inoperable brain tumors. Page was a […]