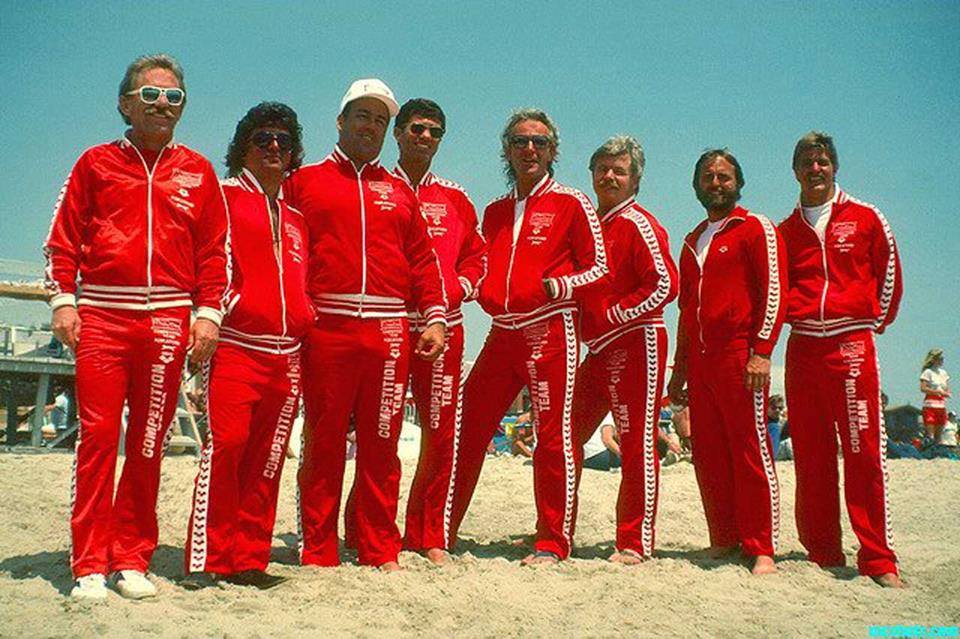 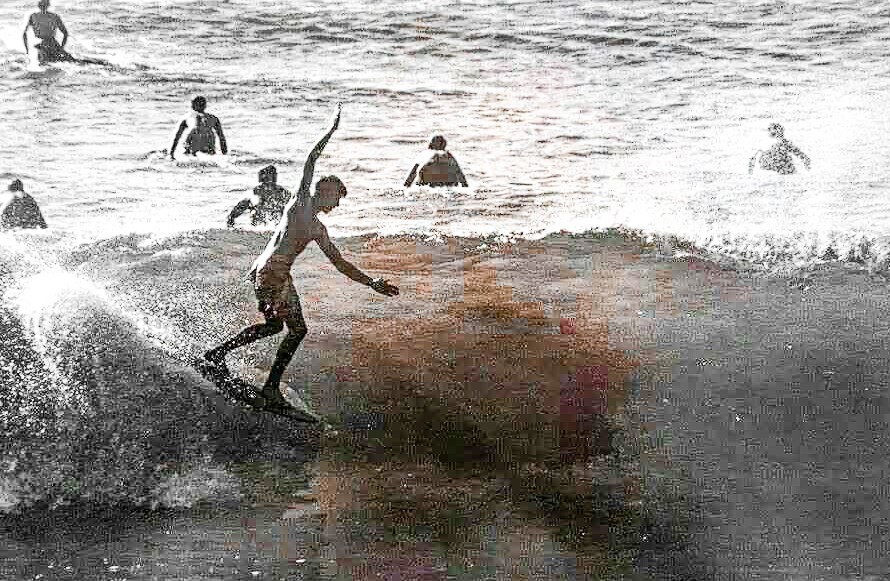 John Teague won or placed in almost every contest he entered

Shortly after John Teague, and his family moved to Hermosa Beach from Tennessee in 1958, he began surfing on canvas surf mats rented from Juicy James, on the Strand, at 14th Street. Two years later, at age 15, he got his first surfboard.

“It was a Lyman Surfboard. I can even remember my first wave. It was shoulder high, and I dropped in late, on an angle to keep from pearling. I took two quick steps, and barely beat the section, and went down the line.”

Teague’s plan was to surf 14th Street every day. But the new kid’s plan changed.

“Tom Evans was a big, mean looking local with these chisel shaped teeth. He told me to go surf somewhere else. I kept coming back, until one day he grabbed my surfboard and took a bite out of the nose. Then he spit the foam and fiberglass at me and said he’d take a bite out of me if I came back.”

“The next day, I started surfing 2nd Street and the Redondo Breakwater with John Joseph, Carl Carillo and Frankie Edwards. They were the hot locals of South Hermosa and nice guys. Frankie was the only Black surfer on the coast. Frankie and I went to school together at Redondo High School.”

Teague’s idols were Donald Takayama, Lance Carson, and Henry Ford, whom he saw in the early surf films at the Pier Avenue Junior High School auditorium.

His second board was a new Bing. When he broke the nose off, he took it to Skeg Surfboards to be repaired. The owner was Mr. Slycke, a Redondo High substitute teacher.

“They were taking forever to repair my Bing, so the salesman said I could borrow a used board. I took a new one. Mr. Slycke came charging down to 2nd Street and waited for me to get out of the water. I thought he was going to chew me out. Instead he complimented me on my surfing, and told me to keep the board.” 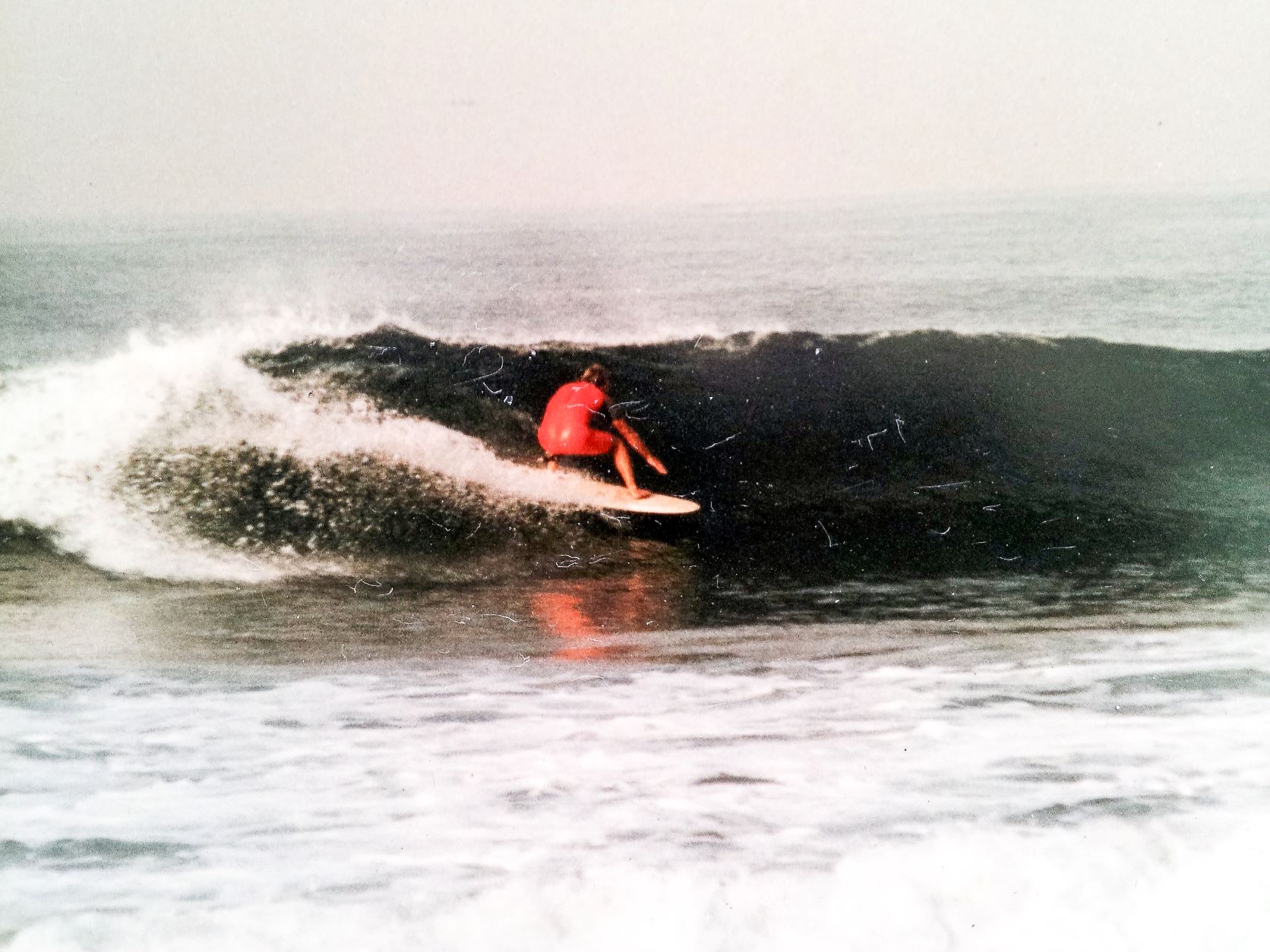 Joseph recalled that KTTV’s Bill Walsh showed up late and asked the finalists to reenact their heat. Bredesen, the only finalist not to have begun drinking, was clearly the superior surfer during the reenactment, leaving the TV audience to wonder why Teague won the contest.

Teague was the surfer nobody wanted in their heat. We all knew if he was having a good day he could beat anybody.

With Teague’s induction, all five members of the 1982 Dewey Weber surf team are now on the Hermosa Beach Surfer Walk of Fame. The others were Dru Harrison, Daryl Dickie, John Joseph, and myself. “

“In beach breaks, we could hold our own with any other team in the world, and Teague was our best beach break surfer,” Joseph said.

“I placed in every surf contest I entered for the next couple of years, up and down the coast,” Teague recalled. “Then it happened, at the United States Surfing Championships at the Huntington Beach pier. They made everyone wear these cumbersome Bell Crash Helmets. They said it was for our protection in case we hit the pier.

“The surf was 10 feet, and we were surfing blind because the helmets would fill with water and slip down over our eyes.”

“I knew Bell was paying big bucks to Huntington Beach. I came to realize that surf contests weren’t fun anymore. Surf contests were never been about money or trophies for me. They were about having fun, and keeping my peace of mind.”

About this time, his wife Marsha died in a car accident, leaving him to raise their two young children

John took his first trip to Hawaii in 1964. He rented near Sunset Beach and surfed a new surf spot named Velzyland after Hermosa shaper Dale Velzy, with almost nobody else out. He returned to Hawaii every winter for the next decade.

Teague shaped and airbrushed surfboards for Eddie Underwood in the mid-1970s, and worked construction, until he became a licensed electrician.

Throughout his life, he has also been a painter. His signature work is reverse paintings on salvaged windows.

“I paint the foreground first and then the background. It’s the opposite of the way art is taught,” he said.

His paintings have been exhibited at Cannery Row, and each year at the Hermosa Beach Art Walk.

When asked to recall his scariest day surfing, he flashed back to an October session in 1960 at Killer  Dana Point. He said sets were 12-feet and he got swept through the pier on every wave.

“I found out real fast why they called it Killer Dana,” he said.

When asked his favorite spots he said, “I remember favorite days, all over the South Bay and up and down the coast. I remember the people having the most fun, besides me.” SWOF 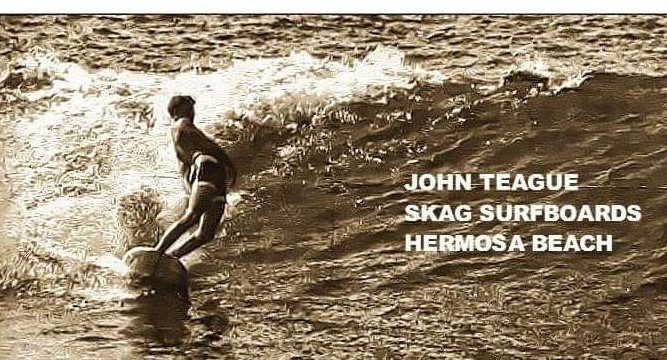