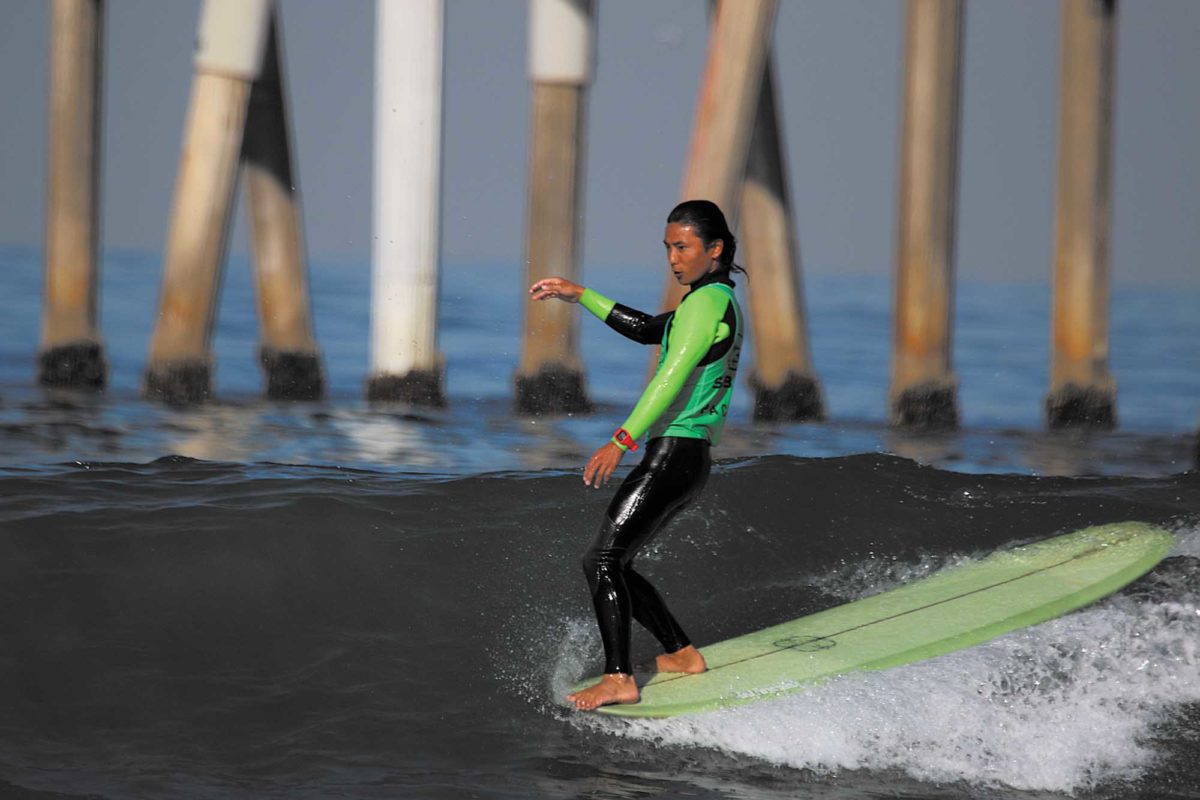 Taka Inoue, of Japan, took over the right next to the pier to place first in the Hotdogger Pro division. Photos

The Fourth Annual Subaru Pacific Hotdogger Surfing Championships drew 50 of the top-rated longboard surfers from around the world to the south side of the Hermosa Beach Pier on Saturday. The sun was out and so were plenty of fast, glassy, 3-foot tubes to ride. Eddie Solt put on the event with the help of long-time surf buddy Shawn O’Brien as head judge. The judges included John Grannis, Pat Cahil, David Wells, Jon Mangiagli, Marisa and Surf Sista as the main judges.

“Eddie and I were going crazy trying to be fair seeding the heats,” O’Brien said. “We finally agreed to have everyone show up at 6 a.m. to pull their names out of a hat. The first six guys were the first heat. Some of the heats were more loaded than others but it was the only fair way to do it.”

Bobby Warchola was doing an outstanding Rick Dees announcing job. I think he is going to be a radio DJ.

“This is the first contest I have been to as a spectator. It is really nice,” observed Beth Cambell, who helps South Bay Boardriders contests.

Shane Jones was busy drumming up sales for his new Hotdogger wetsuit. It’s the Body Glove classic Nehru Kosac design from 1968. It’s the suit I did a Surfer Magazine ad for with Robert August, Rick Irons and Rich Chew in the Jacobs Showroom.

After watching the early heats, Shane said, “The waves are fast and closing out in shallow water. I am going for the coasters.”

Mike Takayama, who was in Shane’s heat scored with rides into the pier. Mike Siordia and Hudson Richie did it all. Hudson was winning the heat, hanging heels and scampering back in time for a switchfoot coaster. Siordia took off on an overhead wave fin-first and hit the lip fin-first, hoping the board would spin around in time. It didn’t. Hudson advanced but Mike Siordia did not. 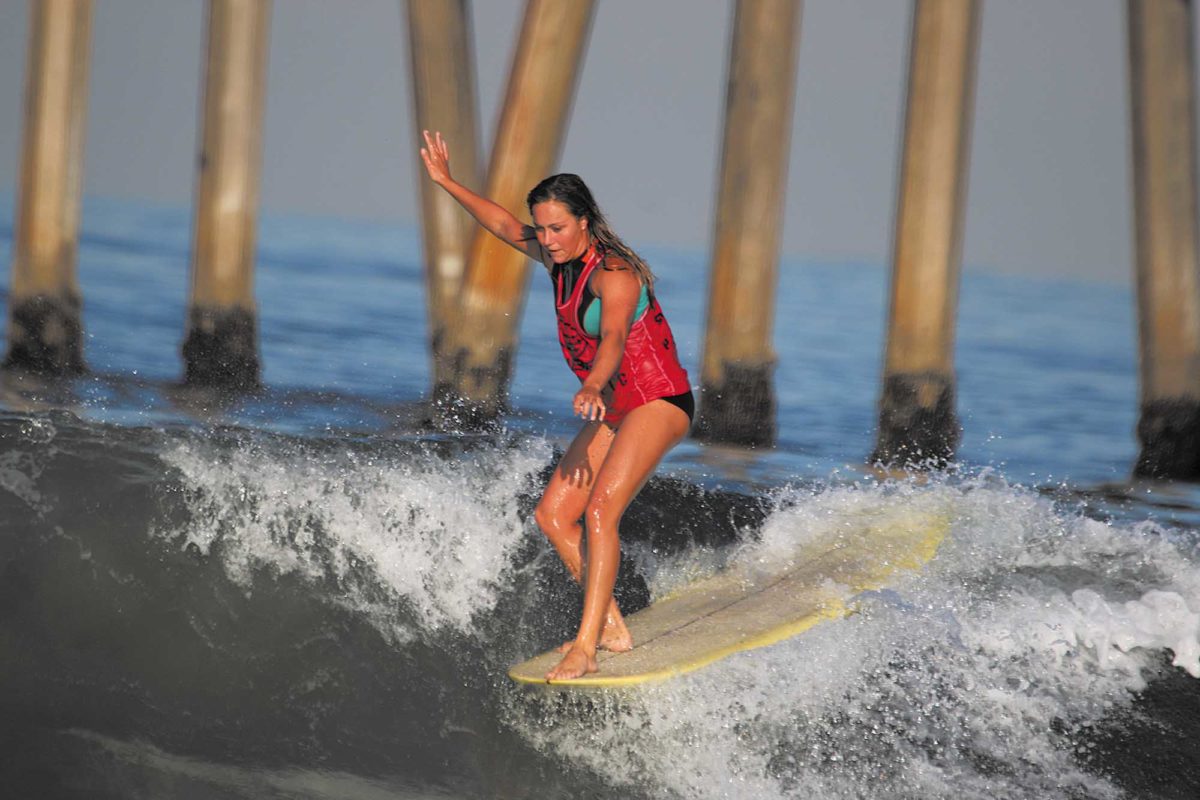 Sophia Arky, of Redondo Beach, was at ease at her local break.

Noah Cardosa and Levi Prairie got some good tip rides followed by smooth coasters. “The waves are fast and powerful. You have to be careful not to get blown up coming off the lip.” I saw a surfer get a set tube.

Zack Raffin took off on a close out and escaped through the doggy door, still standing. I have never seen anything like it.

Christian Stutzman was his usual amazing self, hanging heels off the tip on every wave next to Bucky Barry, who was hanging ten into the Pier. Dave Schaefer said, “The only way to win is to get the fast rights running off the pier.”

Brian Bent was scratching his head wondering where to surf. Brian rides ‘30s style kook boxes and pre ‘60s longboards. He was riding a ‘60s Bing Balsa board. “I am starting to get hurt just carrying my heavy boards to the water,” he said. “I don’t know how the old time surfers carried their boards down and up the trail at the Cove.”

My old surf buddy Rocky Sabo added, “Everybody used to tell me and Mike, if you can surf Hermosa Beach you can surf anywhere in the world.”

The girls were just as good as the boys. Girls came from all over just like the boys.

Local girls Sarah Foley, Morgan Sliff and Sophia Arky started every wave on the nose and finished every ride with a smooth coaster. Sophia did a headstand all the way to the beach. Katlin Maguire from Oceanside was the number one WSL Longboarder two years ago and was looking good riding the nose pulling into the tube on the sets. But she took some nasty wipeouts on the way out. “I love these Hotdogger Surf Contests but can’t get used to how fast these waves are,” she said. 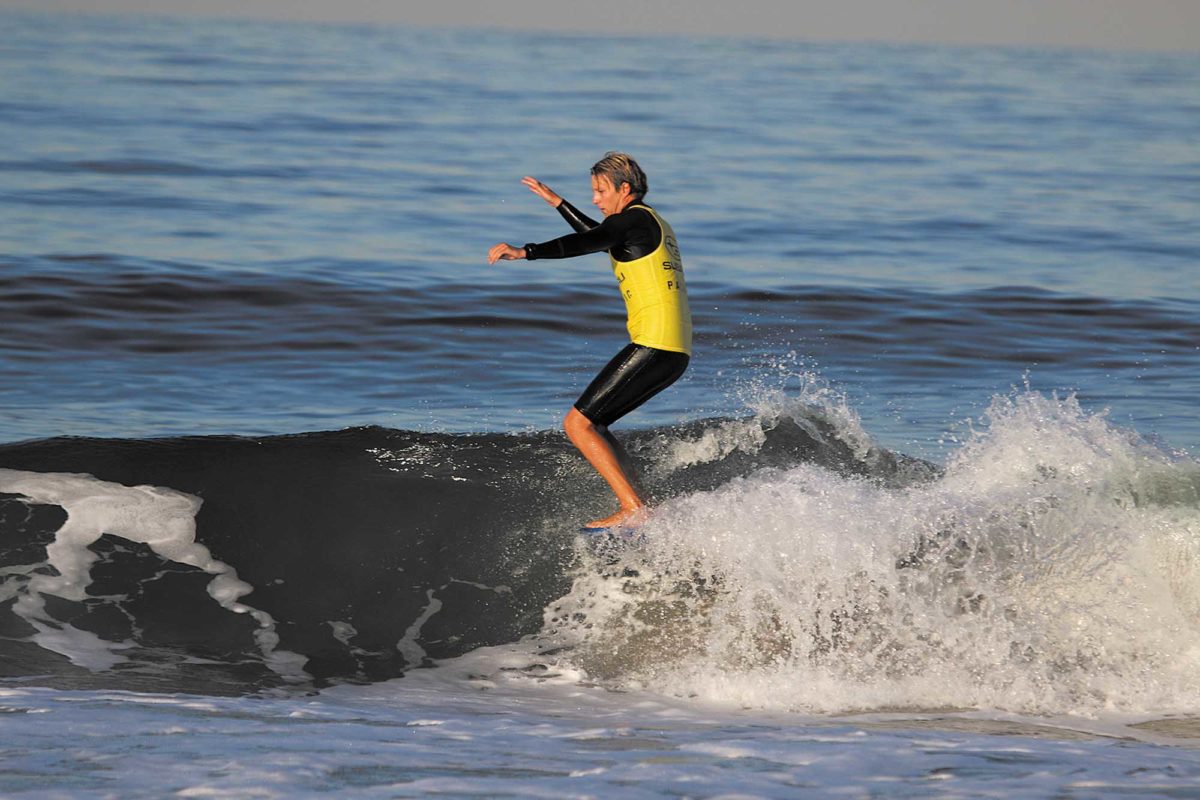 Christian Stutzman placed second in the Pro Division and third in the men’s 18-45 division.

Mickey’s Deli delivered their famous sauce sandwiches and pizza, a classic lunch for the classic hotdogger.

In the Super Dog Heat, each surfer put $20 into the jar. Wore a Hawaiian sort and rode a pre-’65 surfboard in a single 30 minute heat. Over 30 surfers competed for the $550 pot. Next to the pier looked like the San Diego Freeway at rush hour. Shawn O’Brien and his 10-year-old son Cormac avoided getting run over by surfing the south end of the area. Shawn even blocked for Cormac to prevent anyone from dropping in on him. The strategy worked, Ten-year-old Cormac won the $550 pot.